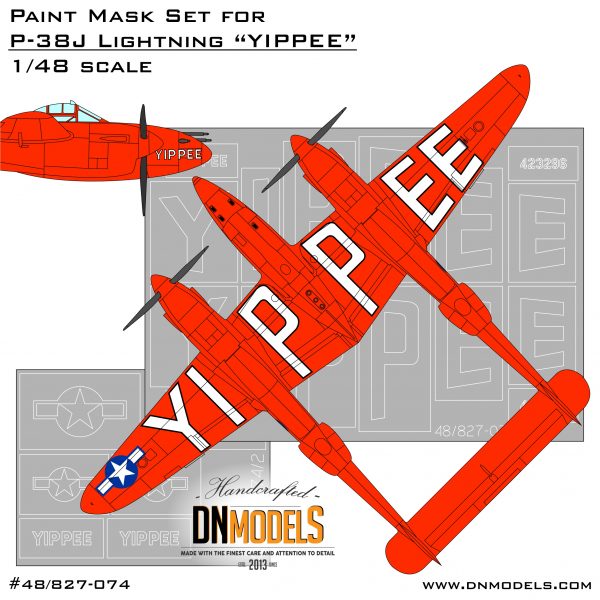 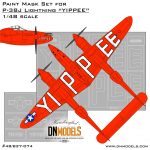 The set includes two sheet of pre-cut masks (shown in the picture). The masks are made from thin masking tape, which is easy to be peeled off and doesn’t leave any stains. The tape is tested on clear and painted model too. If carefully removed after painting, they can be used over and over again. It is flexible and easily applied over curved surfaces. Semi-transparent for easy and accurate placing.

is a mask set designed for P-38J Lightning kits in 48th scale. It is dedicated to the 5000th produced Lightning fighter plane. The plane was painted bright red to commemorate the long and successful production line of twin-prop fighters made by Lockheed. By the end of the war, this number was doubled, with production of the famous aircraft reaching as many as 10 000 aircraft built. Even more were on the production line when the war ended after which they were eventually cancelled.

is featuring the insignia, which is mostly white and applied over bright red airplane. All bright colors like yellow, white and red are very hard to work with, especially on large surfaces. In 48th scale, P-38 Lightning is rather big prop plane, thus painting it in red is tricky. Applying decals over the airplane and over red color is even trickier, that is why this set exists. It covers everything needed to apply white and outlined letters using paints, instead of using decals. Acrylic paints present some specific challenges when it comes down to white, red and yellow, the three most challenging colors for modelers. “Yippee” P-38J features two out of those three, that is why we highly recommend using masks instead of decals for creating this specific variant. This will eliminate any troubles with decal films, as well as with any eventual paint color variations that can be caused by some of the aggressive decal solutions on the market.