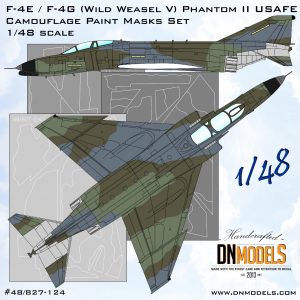 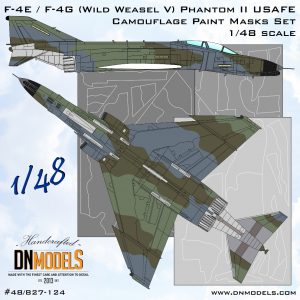 was a code name given to USAF aircraft capable of firing anti-radiation missiles. Their main task was Suppression of Enemy Air Defences /SAED/. In mid 1960s, Vietnamese forces were using Soviet SAM – Surface to Air Missiles. Those created a lot of troubles for US NAVY, Marines and Air Force aircraft. In order to counter the effectiveness of cheap and widely available SAMs, USAF introduced SAED equipped airplanes to fight the threat. They were called Wild Weasels. Several types were equipped with electronics to do the task, most noticeable of which were F-105s and F-4s. Latter one was further improved after the end of the conflict in South-East Asia.

by McDonnell Douglas was based on F-4E – latter one being the definitive F-4 variant. Lessons learned in Vietnam led to the development of the so called – Advanced Wiled Weasel, which made its first flight in 1975. The plane was very successful, flying actively ’till the mid 90s, including many missions in Operation Desert Storm. Some of the F-4G Wild Weasels were painted in different camouflage, featured in this DN Models’ Mask Set. Those were stationed in Spangdahlem Air Base, Germany. They were part of USAFE – US Air Forces in Europe. The camouflage was adapted for European theatre and was similar to the initial paint scheme applied on the Fairchild A-10As. The darker green appearance was perfectly suited for the European landscape. Similar camouflage scheme was used on some standard F-4E Phantoms in Europe, doable with this paint mask set.