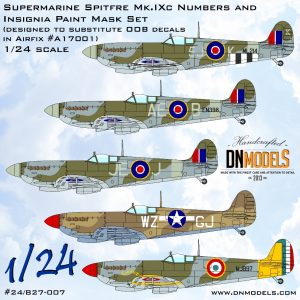 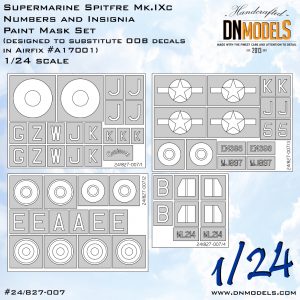 Numbers & Insignia is a set designed to cover Airfix #A17001 kit in 24th scale. Masks in this DN Models’ set feature most of what is provided on Airfix decal sheet. Due to the large area covered with numbers, letters and insignia, using masks for depicting the versions is the most realistic and successful way to replicate the aircraft offered with #A17001. The size of the British Royal Air Force markings, not only on Spitfire, but on all aircraft of that period also dictate the usage of masks instead of decals for maximum realism. In 1/24, this is the best way to complete your model if you are after ultimate  authenticity and various weathering options.

is one of the most popular kits in World’s modeling history. It is available in practically any scale. Airfix, Trumpeter, Hobbycraft and MPC offered 1/24 Spitfire toolings throughout the years. Airfix A17001 is a 2022 new release of the Supermarine Spitfire in Large Scale, featuring all the bells and whistles of the modern technologies in scale modeling design. At the time of its release, the kit is considered as the best Spitfire in 24th scale, with serious competition only in smaller, 32nd scale and from other companies. The Airfix kit features five different paint schemes, which are doable using this paint mask set. Some of the specific items cannot be substituted with masks, therefore the original #A17001 Airfix decal sheet should be used instead.