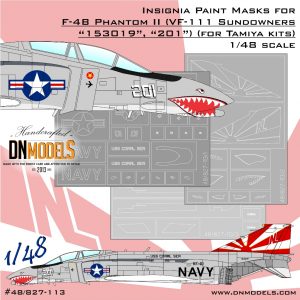 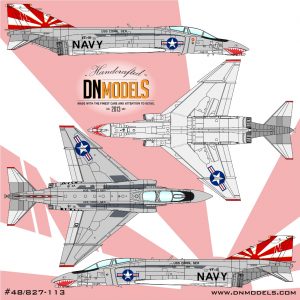 was one of the initial versions of the McDonnell Douglas Phantom II. It was made in more than 600 copies which makes it among the most produced variants of the Double Ugly. It served in the US NAVY and Marines and gained its fame in the skies over Vietnam. Most US warplanes at that time were painted in high-visibility camouflages and insignia. Phantoms used on aircraft carriers were covered in very light gray tones, which, combined with the red, white and blue insignia of the stars made them very distinctive. That was made even more vivid by applying various squadrons’ specific insignia over the tail fin, back and nose, making them look like an airshow painted planes, not war machines.

from Tamiya is among the most desired kits of the F-4 in 48th scale. All together with Academy and Zoukei-Mura, these three toolings represent the very best of the jet modeling sets of the modern times. Sundowners F-4B can be found in many packings with slight variations. This specific one is the same as presented in Tamiya’s kit #61121. Japanese model maker plastic quality and fit are undisputed. However, their decal range is not among the most popular out there. This paint mask sheet covers most of the specific insignia, eliminating the need for many of the large decals included in the kit.

mask set is designed to be used exclusively with 1/48 scale Tamiya #61121 F-4B Phantom II. It might fit other toolings as well, however it is highly recommended to check the measurements first. The included insignia is shown on the pictures of DN Models’ mask set. Some decals will be required to supplement this set. Many small and/or intricate markings cannot be replicated with masks. However, VF-111 Sundowners paint scheme is one of the most recognizable F-4 US NAVY options, thus many decals are widely available due to its popularity.