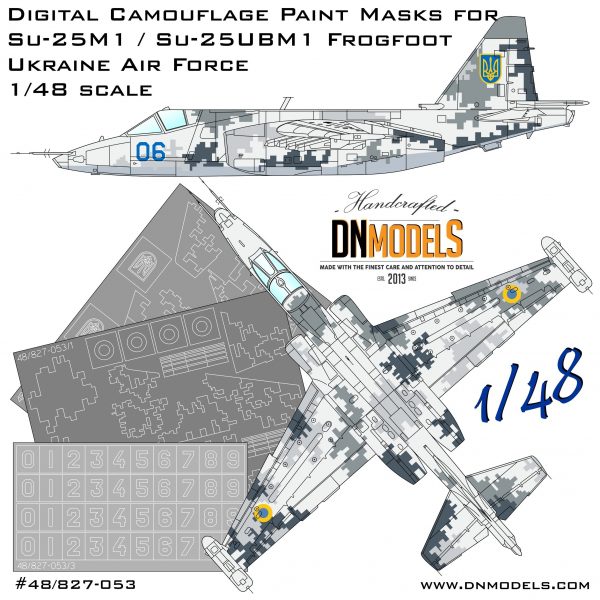 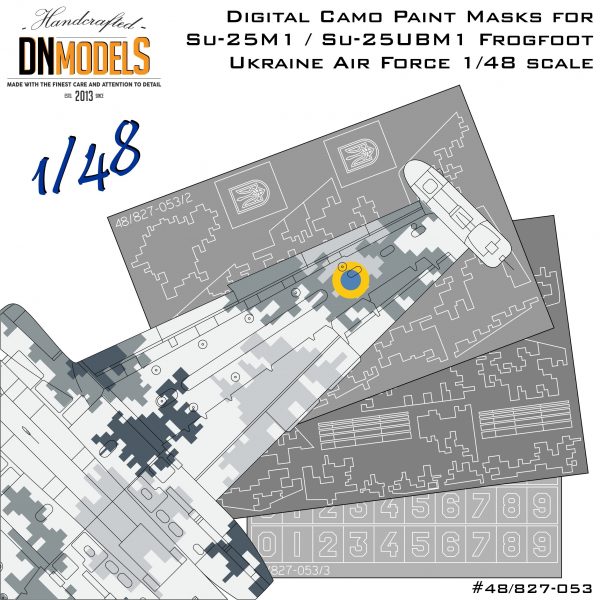 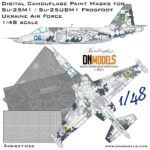 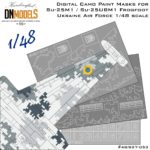 The camo scheme is based on bort numbers:

is suitable for both planes – Su-25M1 and Su-25UBM1. Of course, the dual- and single-seater Frogfoot planes are very different in appearance. Dual-seater profile is larger compared to Su-25M1. However, Ukrainian Air Force digital camouflage is almost identical on both.  Some of the planes feature similar shaped spots with different colors. Use reference photos in order to get maximum realism of the replica you are building.

The stencils – numbers and insignia – include all the options for Su-25M1/UBM1 that the camo scheme is based on. Those bort numbers are mentioned above. However, other variations are doable too, depending on your personal preference and reference materials. In addition to the standard patterns, some additional spots are included in the sheet, which can be used for that purpose.

are upgraded versions of the Frogfoot used by the Ukrainian Air Force. The upgrades include a new navigation system and more accurate weapons delivery systems. It is said that the survivability of the aircraft is enhanced. However, it isn’t clear how that was achieved exactly. In addition to that, it is not certain how many of the original Su-25s were completed to the new standard. Of course, those that were, wear the digital camo. Same goes for the dual-seater versions of the aircraft. Of course, that doesn’t make the Digital Camouflage any less interesting. Ukrainian Air Force Su-25M1 and Su-25UBM1 are probably the most attractive Frogfoot jets in the World currently. Even though in small numbers, they have very distinctive and modern appearance.