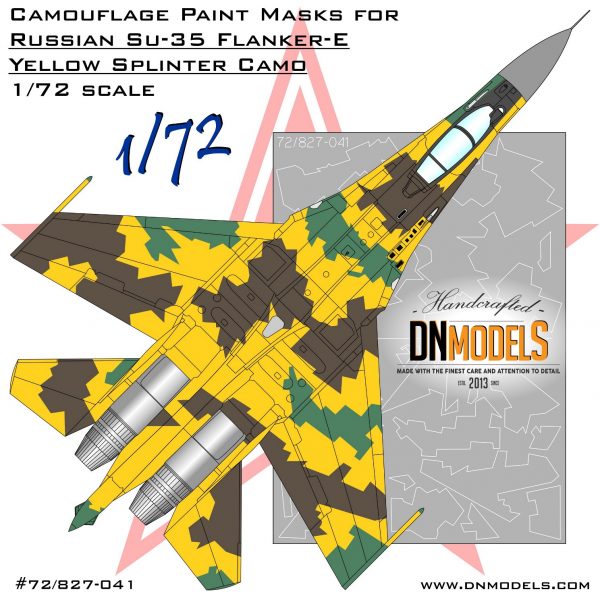 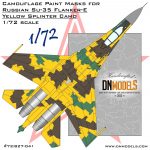 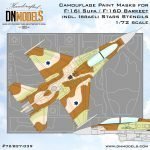 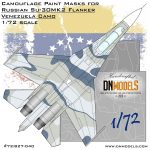 Suggested use: Most Su-35 kits in 72nd scale

Suggested use: Most Su-35 kits in 72nd scale

The set includes one sheet of masks (shown in the picture). The masks are made from thin masking tape, which is easy to be peeled off and doesn’t leave any stains. The tape is tested on clear and painted model too. If carefully removed after painting, they can be used over and over again. It is flexible and easily applied over curved surfaces. Semitransparent for easy and accurate placing.

is available from several manufacturers, however latest toolings are proving to be the most accurate. This scheme was originally assigned to Su-37, which appeared in late 90s, featuring side-stick controls, glass cockpit and canards. Kit of Su-37 is also available in 72nd scale, however with unconfirmed quality and accuracy. Those canards were removed on the latest Su-35 modifications which proven to be the most successful of the Flanker family. You can use the camo scheme for each of those according to your preference.

or “Yellow Splinter” as it became more famous, is specially painted Su-35 option, designed to appear in air shows around the World. It is not clear, will that Splinter scheme appear on combat aircraft. Both Su-37 and Su-35 Splinter schemes are very close, with only one Su-30 appeared in similar yellow camouflage for unknown purposes. It is still not used in large numbers and it might be kept only for demo airplanes. However, this camouflage is the most attractive Flanker scheme so far.