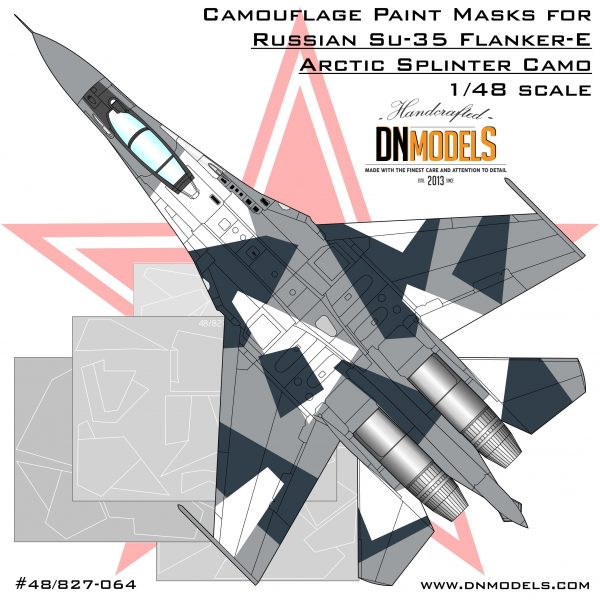 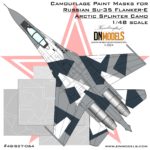 The set includes four sheets of masks (shown in the picture). The masks are made from thin masking tape, which is easy to be peeled off and doesn’t leave any stains. The tape is tested on clear and painted model too. If carefully removed after painting, they can be used over and over again. It is flexible and easily applied over curved surfaces. Semitransparent for easy and accurate placing.

is available from Kitty Hawk and Great Wall Hobby. Both sets are very good, with slightly better reviews given to G.W.H. option. The camouflage schemes included in the two kits are different, however DN Models made mask sets for the famous Yellow Splinter and Arctic Splinter in 48th scale to cover both of the releases. This Arctic Splinter scheme was so interesting, that the USAF applied it on their F-16 Aggressors, in several variations. Blue, Brown/Green and Black splinter aggressors appeared shortly after the appearance of the Su-35, plus an F/A-18 is also available in that camouflage.

or “Yellow Splinter” as it became more famous, is specially painted Su-35 option, designed to appear in air shows around the World. The Arctic Splinter on the other hand is more of a combat-oriented camouflage, however neither of them appeared on service-used Flanker-Es. Arctic Splinter camouflage by itself is very attractive and it is one of the few 21st century designed camouflages that were applied on the Flankers.