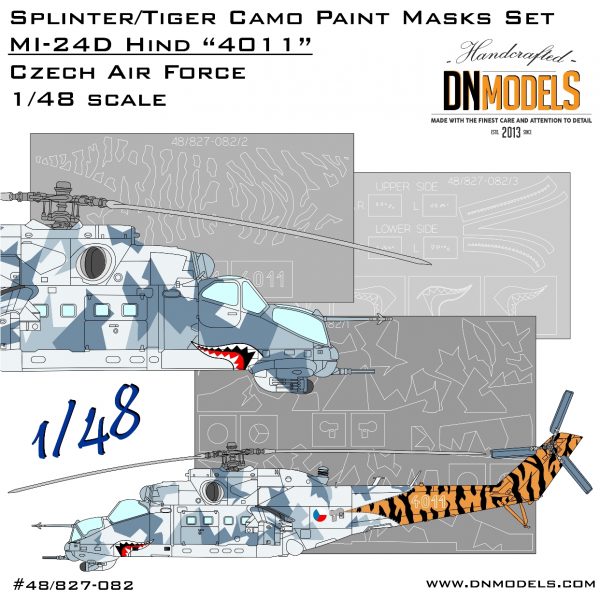 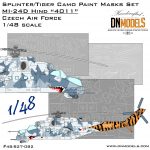 This camouflage is a demo scheme made for the Czech Air Force. The set features the splinter spots as well as the tiger stripes. The tiger logo itself cannot be recreated using masks due to the limited size of the 48th scale kit. The tiger should be substituted with decal. That is the reason it is missing on the profiles of the helicopter on the set. Some details of the zipper are also doable only with decals or by hand painting, but not with masks. Everything else for the specific bort “4011” is included in the set and replicates the Splinter/Tiger of the Czech Air Force.

is available from Revell/Monogram and Zvezda. Any of the kits mentioned is suitable for this mask set. The Revell/Monogram kit is very popular on the market and is considered relatively accurate release despite its age. Zvezda Mi-24 1/48 is the latest release, but it is yet to prove its qualities as a kit. However, knowing the quality and the fame of the Zvezda Mi-24 in 72nd scale, it is expected that 48th scale release will be as good as its smaller version. The latter one won many awards and is considered one of the best representations of Mil Mi-24 attack helicopter on the modeling market.