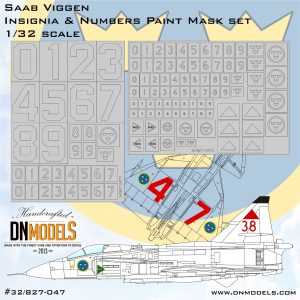 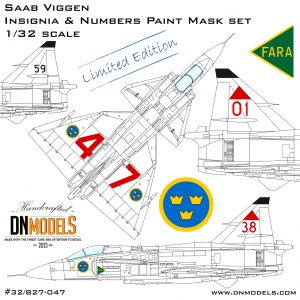 features several sizes of numbers, warning signs and Swedish Air Force Roundels. On the real aircraft, they were applied using different types of paints, including fluorescent paint on some of the numbers. The set compliments the Saab 37 Viggen Splinter Camouflage Limited Edition Set designed for Jetmads Viggen. It is designed to be used with Jetmads kit, which is the sole 32nd scale Viggen on the market as of release date of this set. It can also be used with custom made 32nd scale Viggen kits, produced via 3D printing or scratch building techniques. The set also features an additional roundel and a suggestive guide how to paint the roundel. This guide is only a possible variation and not mandatory to follow. Successful outcome of the painting depends on many factors, most importantly the type of paint. The additional test sample is included so the modeler can make tests before applying the actual markings on the kit itself.

includes roundels, numbers and warning signs enough to cover at least two Viggens in 32nd scale. The set was designed in that fashion due to the fact that many modelers made their initial order to Jetmads requesting more than a single kit. This happened because of the nature of the release, which was Limited Edition with only 500 kits produced and with no clear substitute for the near future. Due to that same reason, the DN Models’ mask set is also a Limited Edition. However, with the possibility of re-using the same mask again and the number of items included in this mask set, two or more Viggens can be successfully reproduced.

is promised to be the most accurate kit of the Saab Viggen in any scale. It represents the so-called “second generation” Viggen and it features plenty of details which are beyond the reach of the contemporary injection moulding production. The Saab Viggen is a massive plane in real life and in 32nd scale is relatively huge as well. Masking and painting out the camo scheme as well as the insignia and numbers is the best way to achieve realism for such project. Jetmads set is promised to feature plenty of paint schemes, plus some additional info regarding the splinter camouflage. The DN Models set is not related to the Jetmads directly, but it covers the basic insignia applied on the standard Viggens used in Swedish Air Force. In combination with the DN Models’ Splinter Camouflage Set, this will eliminate the need for decals to a maximum, except for the small technical or specific complex multicolor markings.