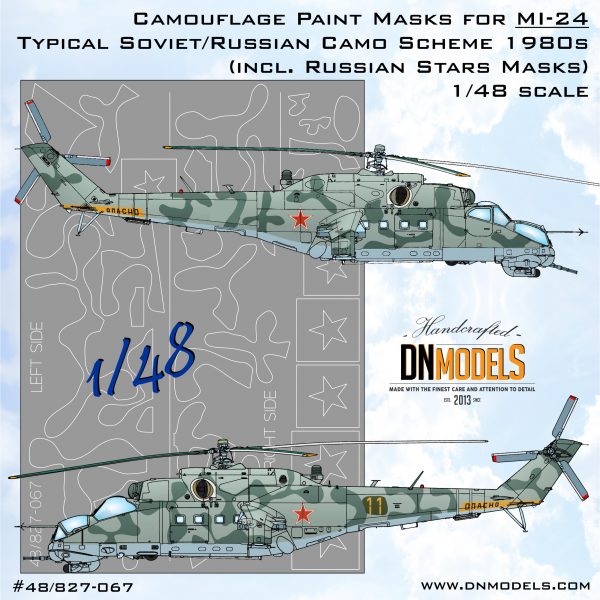 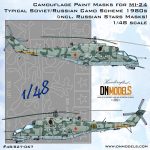 The set includes one sheet of masks (shown in the picture). The masks are made from thin masking tape, which is easy to be peeled off and doesn’t leave any stains. The tape is tested on clear and painted model too. If carefully removed after painting, they can be used over and over again. It is flexible and easily applied over curved surfaces. Semitransparent for easy and accurate placing.

camouflage set is designed and based on the standard Soviet and later Russian paint scheme that was used on the attack helicopter. Mi-24s used in Afghanistan during Soviet-Afghan war in the 80s were painted mostly in similar manner. Many of the foreign clients of Mil Mi-24 flew the helicopter in that scheme as well. Due to its spotted appearance, this camouflage pattern allows for interesting weathering techniques, especially for the Mi-24s that were used in desert conditions – Afghanistan, Africa, Middle East. Since the appearance of Mi-24, this is considered one of the standard paint patterns.

is available from Revell and Monogram, with Zvezda new quarter scale tooling appearing in early 2020. Any of the kits mentioned is suitable for this mask set. The size and shape of the spots allow for various modifications and are easily adjusted. The Revell/Monogram kit is very popular on the market and is considered relatively accurate release despite its age. Zvezda Mi-24 1/48 is yet to prove its qualities, pending its release. However, knowing the quality and the fame of the Zvezda Mi-24 in 72nd scale, it is expected that 48th scale release will be as good as its smaller version. The latter one won many awards and is considered one of the best representations of Mil Mi-24 attack helicopter on the modeling market.