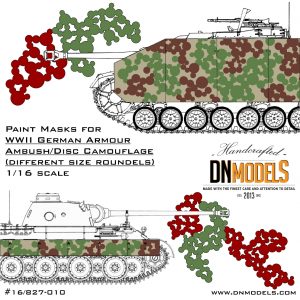 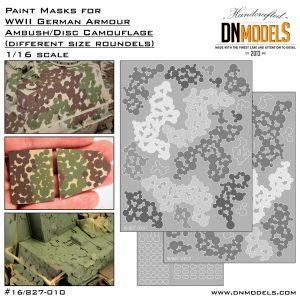 was a non-standard, German WWII field applied camouflage pattern, also known as “ambush camo scheme”. It was used on various machines, like Grille, Marder, Tiger II, Panzer III/IV, Panther, Jagdpanzer, Jagdpanther, Sturmpanzer, Hetzer and StuG III & IV. It is famous mostly for its appearance on the schurzen, but was seen all over the vehicles as well. It is a random pattern scheme, thus application of it over the model can be done according to one’s imagination. For accurate representation of some specific vehicle with available reference photos, additional single and dual spots are added to this model set. This DN Models product compliments the 1/16 DN Models German Crosses & Numbers set.

is the new trend in the armor modeling. Many and various models of Tiger I and II, Panzer III & IV are already on the market, with few StuGs that are the initial releases of what is to be a long line of variations. This masks set is perfectly suitable for any of the abovementioned, but is designed to best suite Sturmgeschutz kits, which are among the most popular disc camo pattern applications. Due to the larger size of 16th scale, painting and weathering the assembled kit necessitates the use of masks, which gives the best replication of the real life appearance.