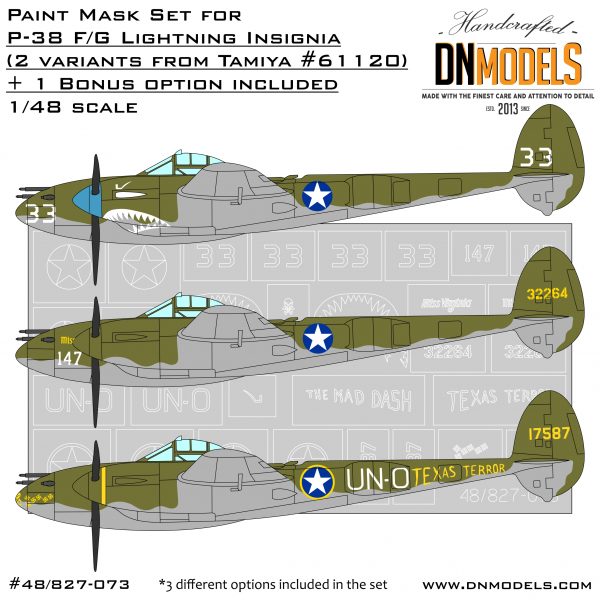 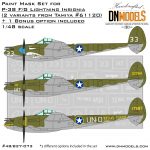 is a set designed to cover Tamiya’s #61120 kit in 48th scale. The kit itself features two aircraft, first one being depicted on the boxart. The plane belonged to 339th Fighter Squadron, 347th Fighter Group, 13th Air Force, Guadalcanal, April 1943. The second one, featured in the Tamiya’s instructions is White 33, from 39th Fighter Squadron, 35th Fighter Group, 5th Air Force, Port Moresby, late 1942. Both aircraft share similar camouflage scheme. Masks in this set cover everything that is featured on the decals, plus the nose art and excluding the technical stencils and aerial victories. Due to the well known issues with Tamiya decals, using mask set for depicting the versions is the most realistic and successful way to replicate the aircraft offered with #61120.

is a complimentary option, completing the two variants included in Tamiya’s P-38 Lightning #61120 kit. The aircraft was called “Texas Terror / The Mad Dash” and was with serial number 41-7587. The bird belonged to 94th FS, 1th FG, sometime during 1942. The plane is with similar paint scheme, although with this particular one, there are big letters on the outer side of each of the twin booms. They are different from both sides and are painted in yellow. The exact version of the aircraft varies according to the different sources, however, Tamiya #61120 should be sufficient enough to be adapted to represent that specific scheme. Due to the high level of accuracy that Tamiya provides with their kits, this mask set is usable with other 1/48 P-38s as well. Any relatively accurate option of the Lightning in quarter scale on the market should work great alongside with this insignia mask set.