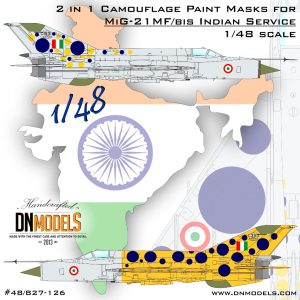 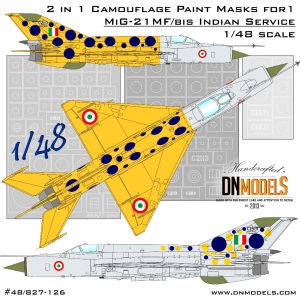 was introduced in 1963-64 as the first supersonic fighter jet to enter Indian Air Force. Since then, more than 1200 MiG-21s have been in service with various roles. Indian Air Force still operates MiG-21 Bison actively, with planned retirement for 2025. Bison variant is famous for shooting down an F-16 in early 2019, which is considered the pinnacle of Fishbed’s Indian service life. It is also the ultimate variant of the Mig-21 ever used, being a deep upgrade based on the MiG-21bis. Besides those facts, Hindustan Aeronautics Ltd. in India produced MiG-21 under license, completing 657 airplanes, of which FL, M and bis variants. Despite its poor service record in India, MiG-21 is considered one of the legends of its Air Force inventory.

mask set covers two variations of the camouflage of the MiG-21 in India. Those are attractive and high-visibility paint schemes, used in Advanced Combat Training, for quickly distinguishing the adversary aircraft. MiG-21MF and MiG-21bis are the two options included in this set, but even though close in appearance, both planes are quite different. MiG-21MF is the classic variant, with smaller spine and narrower intake, while the bis variant features more fuel in the enlarged spine and 1 inch larger intake. Bis is considered as the ultimate mass produced variant of the MiG-21, as well as the basis for Bison upgrade for the Indian Air Force mentioned above. The two options included in DN Models’ set are the 15th Squadron – “The Flying Lances” – /MiG-21bis/ C2113 and the 101st Squadron – “Falcons” – /MiG-21MF/ C1531. Both were flown in the 90s and are currently retired. The mask sets features the Indian roundels, numbers and flag which are part of the insignia. Specific nose logos are not included.