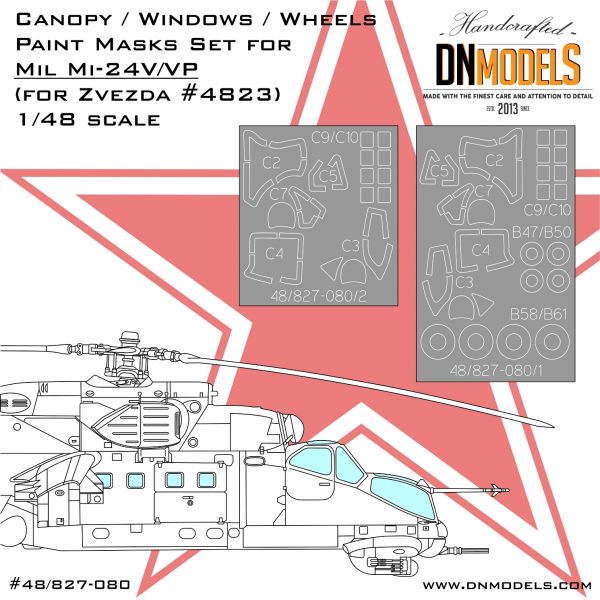 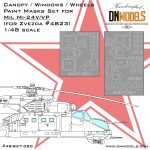 The set includes two sheets of pre-cut masks (shown in the picture).

in 48th scale from Zvezda /#4823/ is the second quarter scale kit of the Hind on the market. The first one being the Revell/Monogram release, which is currently considered obsolete. Surprisingly, despite the popularity of Mil Mi-24 Hind among aviation fans and modelers, there are a limited number of kits on that helicopter subject. Larger option that is available is Trumpeter 1/35 and smaller one is the notorious 72nd scale from Zvezda, which is an award winning release, constantly being repacked and re-released. The middle ground in between the two scales mentioned above is quarter scale. Size-wise, this is perfect for such large helicopter and best suits most of the modelers out there.

and the cockpit are among the most distinctive features of this attack helicopter. Even though Zvezda did not put much effort into making the cockpit of their new release at very high level, modelers still consider this specific area of the Hind as the most important one. It is very attractive and often makes the cargo/troops bay irrelevant in modeling. Proper painting and representation of this area is vital for the model. This set comes with exterior and interior masks, covering both options for the canopy – open or closed. The set also features interior and exterior of the cargo bay windows.