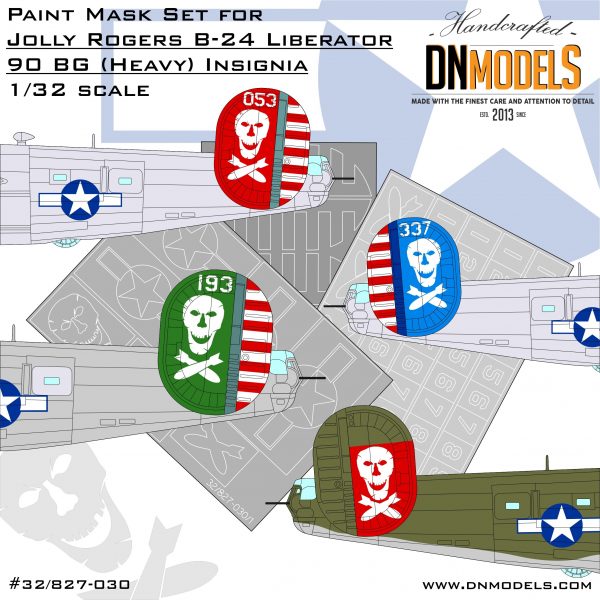 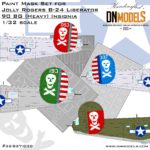 Many variations of the aircraft are doable with this set

Many variations of the aircraft are doable with this set

paint mask set is designed to be used with Hobby Boss B-24 Liberator kits. The mask set is dedicated to one of the most famous bomber groups that used B-24 Liberators -90th. Their skull and cross-bombs can be seen in various colors and in slightly different applications from aircraft to aircraft. This set allows for replicating most of them, but excludes the specific nose art of each aircraft. Since decals have carrier film and cannot be weathered with enough realism, this set provides an alternative approach to solving that problem. Application of paint instead of decals present you with the option to chip the paint and alter the colors of the insignia and numbers, as well as to avoid decals carrier film seen on the decal. Due to the enormous size of the B-24 Liberator in 32nd scale, this is the best method for markings application.

features insignia and numbers, two types of cross-bombs, rudder stripes and the famous skull of the 90th BG. Numbers are presented in two variations depending on the specific airplane. The differ slightly. Almost any combination is doable with the set. Some of the airplanes featured modified skull and cross-bombs, probably painted by the ground crews. Those can be modified by hand over the original skull included in this set. Being re-usable and including all the numbers from 0 to 9, this set allows for more than one aircraft to be painted.

was first formed in 1942 as a B-24 Liberator unit. The group operated from the Southwest Pacific and was assigned to the Fifth Air Force of USAAF. The planes were used to attack enemy airfields, troop concentrations, ground installations and shipping operations in New Guinea, the Bismarck Archipelago, Palau and the southern Philippines. Shortly before the end of the Second World War the 90 Bombardment Group moved to Okinawa, in order to be able to strike Japanese islands and in November 1945 ceased operations. 90th Bombardment Group was deactivated in 1946.