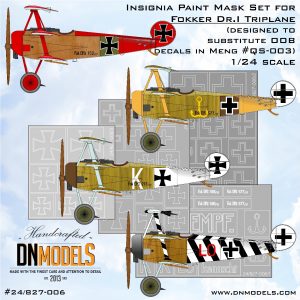 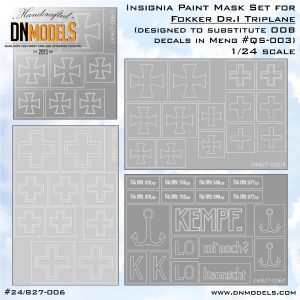 is one of the most iconic airplanes of the First World War. The “Triplane” as it became more famous later, was so popular because of the fact that Manfred von Richthofen flew one in bright red colors. Being the highest grossing ace of the First World War, Richthofen was also known as the “Red Baron” again due to that same plane’s appearance. The last 19 victories that the Red Baron scored was achieved using Fokker Dr.I. Despite some serious technical issues, the Triplane is still one of the most recognizable aircraft ever to be produced and is considered a state of the art achievement in aviation, mostly due to its attractive appearance.

mask set made by DN Models is designed to substitute MENG’s decal set included in their 24th scale release /QS-003/. That is an upscaled version of the 32nd scale Fokker Dr.I that Wingnut Wings released and later on MENG repacked. The mask set covers all the variants included in the box released by MENG. Due to the specifics of the camouflage options of the Fokker Triplane, the masks are far better option compared to decals. All included in the mask set is visible on the sheets depicted on the cover.