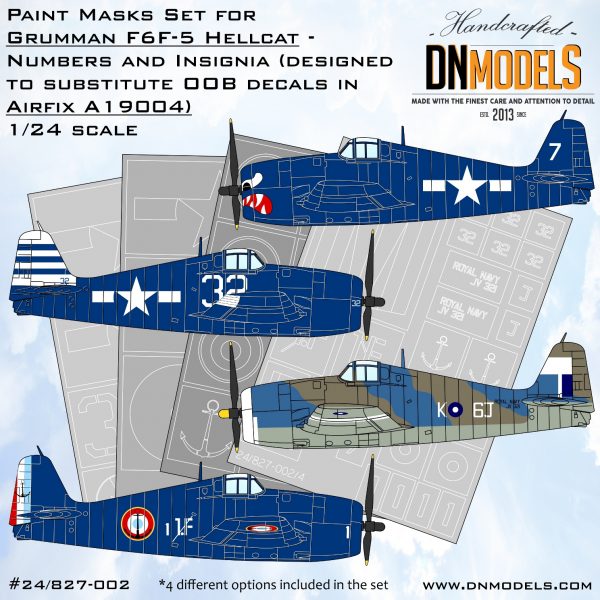 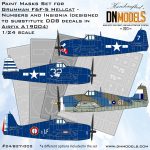 numbers and insignia paint mask set is designed to be used as a substitute for the markings’ decals included in Airfix #A19004 kit. In 24th scale, Hellcat presents a pretty big aircraft model once completed. That, alongside with the relatively large size of the insignia typical for the period Hellcat was used, dictates that decals are not the best option. Painting the insignia allows for better weathering techniques, for which decals are not suitable. Overall look of the painted markings is superior compared to the decal medium and in 24th scale this feature of the masks is highly noticeable.

is the second of the new line of Airfix kits produced in large scale and manufactured according to the new standards. Following Airfix 1/24 Typhoon versions, the British Model maker altered their old and obsolete products, slowly replacing them by a redesigned line of big scale and highly detailed models, one of which is the #A19004 F6F-5 Hellcat. Due to the size of such kits, decals are not recommended for various reasons. The single most important one is the realism of the completed model, which can be achieved easily by using masks instead of decals. Masks for scale models present the modeler with the opportunity to show weathered effects, scratches and color variations, which are impossible when using decals. That is valid especially for the insignia of the completed model, but goes for the canopy as well.