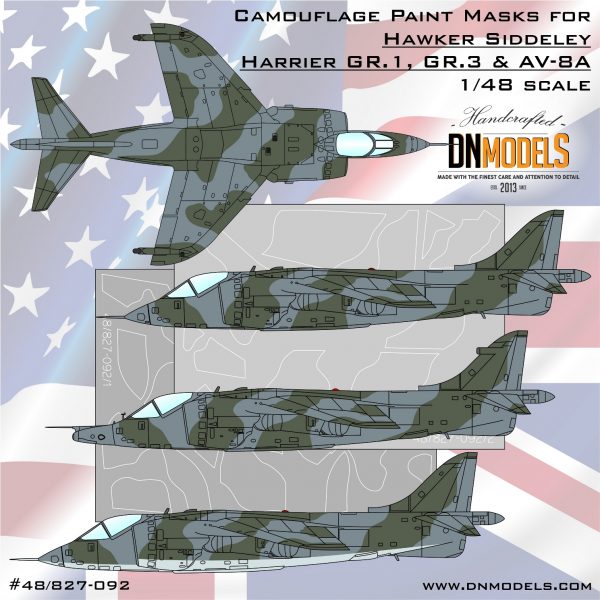 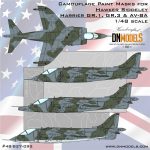 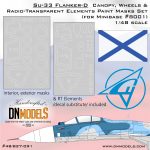 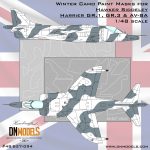 The set includes two sheet of masks (shown in the picture). The masks are made from thin masking tape, which is easy to be peeled off and doesn’t leave any stains. The tape is tested on clear and painted model too. If carefully removed after painting, they can be used over and over again. It is flexible and easily applied over curved surfaces. Semi-transparent for easy and accurate placing.

made by Hawker Siddeley was the first and original Harrier Jump Jet produced. Royal Air Force and US Marines received almost identical aircraft in the first years of the plane’s production run which also received similar camouflage schemes. The pattern applied was in two variations. On the top surfaces of the Harrier, both US Marines AV-8A and RAF GR.1 and GR.3s were the same. However, some of the Royal Air Force Harriers featured camouflage pattern on the bottom side of the aircraft. The planes were painted in dark gray and dark green pattern, which was used during most of the Harrier’s service life. During some winter exercises, Winter Camouflage Scheme was also applied and that was painted directly over the original paint scheme featured in this mask set. Winter Camo was used mainly on RAF Harriers, but it has been seen on US Marines jump jets as well.

kit that this mask set is based on was released in couple variations. AV-8A, GR.1 and GR.3 and VA-8 Matador boxings are available. For the options that are camouflaged, the mask set featured here offers 3 in 1 solution. That means that the three versions are doable – AV-8A, GR.1 and GR.3, including the bottom camouflaged option of the RAF Jump Jets. Camouflage pattern of the most early Harrier Jump Jets was done in similar fashion, so a very wide variety of plane markings can be applied over this camo scheme presented with this DN Models’ masking set. 48/827-092 can serve as a basis for applying Winter Camouflage over it, since this pattern remained beneath the white wash, with the latter one being removed after winter actions completion.