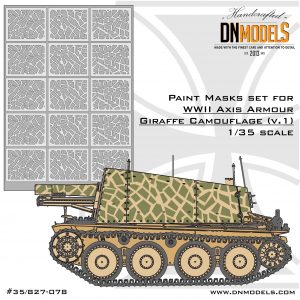 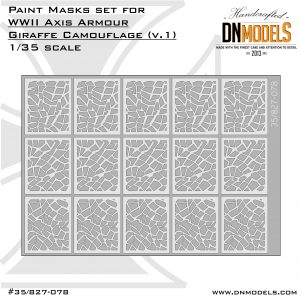 The set includes a sheet of masks (shown in the picture). The masks are made from thin masking tape, which is easy to be peeled off and doesn’t leave any stains. The tape is tested on clear and painted model too. If carefully removed after painting, they can be used over and over again. It is flexible and easily applied over curved surfaces. Semi transparent for easy and accurate placing.

was applied during the late months of the Second World War and was not the standard pattern used on the German and Italian Armor. Giraffe camo was used on smaller vehicles predominantly. Hetzer, Grille, Marder 1 & Marder III SiG’s as well as some Italian tankettes were amongst its applications. Such camouflage is also suspected to have been used on larger vehicles such as Panther tanks, StuG IIIs & StuG IVs as well as Jagdpanzers. Nevertheless, Sd.Kfz. 138 is the vehicle that became famous with its Giraffe camo, mostly because of some reference photos showing clearly the pattern used on such tank. Nevertheless, it was not the only one to feature this scheme.

replicated the skin of a Giraffe, although on the reference photos that survived it is unclear were the edges sharp or soft-edged. This paint masks set by DN Models allows for both applications. If you’d like to make sharp edge camo patter the masks should be placed directly over the surface, while if you’d like to replicate softer edges, some spacing can be used between the surface and the masks. Smoothing the sharp edge camouflage is also doable via various painting and weathering techniques, until the final desired appearance is achieved.