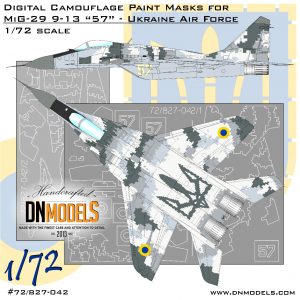 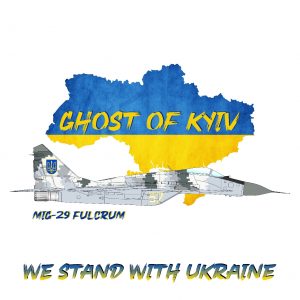 is suitable for most of the MiG-29s in 72nd scale, but it is based on Great Wall Hobby MiG-29 “9-13” Fulcrum-C in quarter scale. The original design was done using 48th scale G.W.H. kit. That was used because of its famous quality and accuracy. The digital camouflage represents accurately “Bort” 57 of the Ukrainian Air Force. The digital camo pattern is very close within MiG-29 aircraft from the Ukrainian Air Force, thus this set can be used to replicate other aircraft bort numbers, including twin-seaters – MiG-29UB 9-51. Modifications might be needed, especially for UB variants.

due to the high demand, this set was made available in 72nd scale, although it wasn’t planned as such initially. It lacks the insignia featured in the 48th scale set due to the limitations of the cutting size. Decals should be used instead. However, the mask set can be used to create famous Ghost of Kyiv /or Ghost of Ukraine/ MiG-29, allegedly used to shot down 10 Russian planes in the very first day of the Russian Invasion in Ukraine. Most likely a myth, Ghost of Kyiv is an enormous morale booster for the Ukrainian military men. If true, the story of Ghost of Kyiv would honor the very first fighter jet ace of the 21st century.