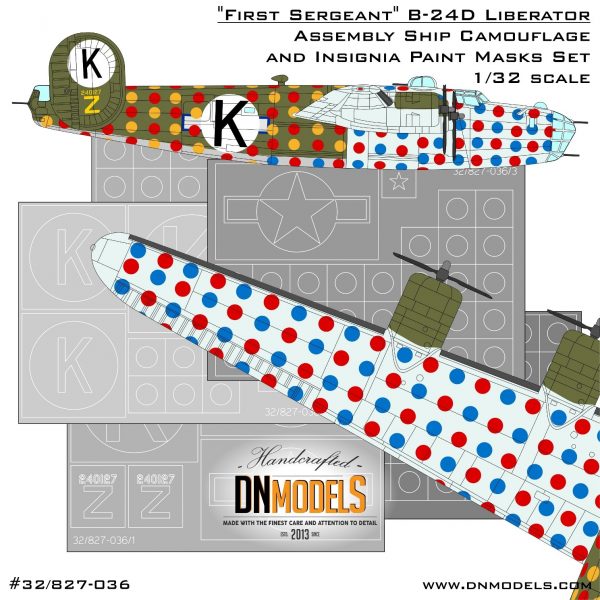 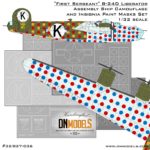 paint mask set is designed to be used with Hobby Boss #83211 kit. The mask set is dedicated to one of the many Assembly Ship aircraft, used to gather formations of many similar Liberators and send them on their mission. Assembly ships were also called Judas Goats, due to the similar role that they represent. Also called Formation ships, those were usually old aircraft lacking armament and often painted with bright colors and featuring additional lightning. This particular aircraft, was a B-24D Liberator, serial 42-40127. It was first used in Algeria under the war name “Thar She Blows Again” where was damaged by FLAK. After that received a second war name – “Bucket of Bolts” – under which it served in England, finally ending as an Assembly Ship know as the First Sergeant

is the second Liberator painted with that polka dot scheme. After an accident with the First Sergeant airplane, another one was painted in almost the same manner. That aircraft is represented by another set of masks from DN Models. First Sergeant scheme appeared to be very successful in the role of Assembly Ship, therefore, after being lost by a mishap with a signal flare on the ground and caught fire, it was quickly replaced. However, the original polka dots spotted plane was the First Sergeant.