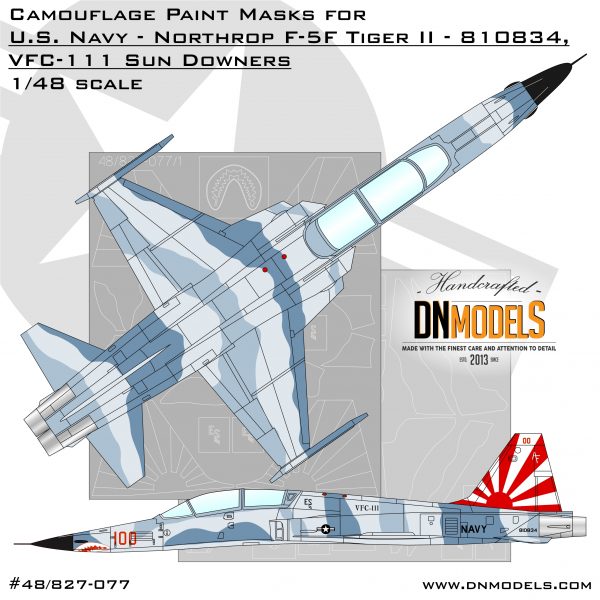 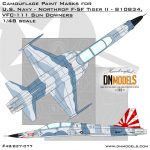 is the two seat version of F-5 Freedom Fighter light supersonic jet. The plane is used for advanced military pilot training, being one of the very few supersonic jet trainers in use anywhere in the World. F-5 in many of its variations is used as an Aggressor/Adversary aircraft. Due to its superb flight characteristics, close resembling MiG-21 in its first and second generations, F-5 is one of the main “enemy” aircraft still being flown by US military.

called Sun Downers, bears very attractive and popular camouflage scheme. It can be seen on many boxarts and is present as a paint option in most of the kits representing F-5F in US service. The blue-ish camouflage for this particular mask set shows a shark-mouth, red/white tail, and can be used to replicate F-5F #810834, nose number “100”. The camouflage scheme applied on other aircraft varies a little, however these camouflage masks can be used for other numbers as well. The tail painted in the “rising sun” white and red varies on some aircraft. It even differs on the same serial number aircraft after new paint has been applied. In order to achieve maximum realism, it is best to follow the reference material for the specific airplane that you want to build. The paint mask set features all the markings visible on the picture of the item.