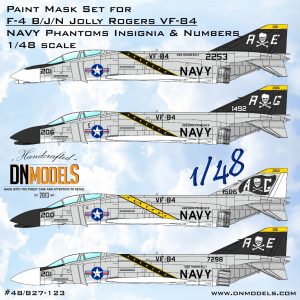 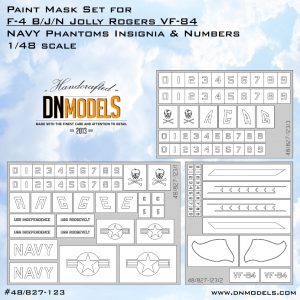 was an US NAVY fighter squadron established in July 1955 and disestablished in October 1995. It was based at NAS Oceana and wore the skull and bones insignia, being one of the most recognizable F-4 NAVY Phantoms livery. The squadron started using the NAVY versions of the McDonnell Douglas F-4 in 1964 with the B model. Later on, J and N Phantoms were used, until 1976, when the type was substituted with the Grumman F-14 Tomcat. While flying the F-4 Phantom, VF-84 Jolly Rogers squadron flew from USS Independence and USS Roosevelt aircraft carriers. From Independence, the VF-84 F-4s flew more than 1500 missions over Vietnam while based in the Gulf of Tonkin.

mask set covers the variations of the insignia applicable to any of the F-4 variants that were used in VF-84 – B, J and N. The insignia allows usage on any decent Phantom from the abovementioned variants in 48th scale. However, the masks were designed using Zoukei-Mura and Hasegawa Phantom kits, which /along with latest Tamiya release/ are considered to be the most accurate representations of the MDD jet. Two variations of the skull are included, as well as all the numbers from 0 to 9, in order to provide more paint options. Two versions of the tail fin insignia are available. High-visibility US Stars are also featured in this mask set. Technical numbers and stencils, as well as small details of the insignia are not included. Careful research with picture reference is recommended in order to replicate accurately a specific plane. All the items seen on the covers of DN Models’ mask set are featured on the mask sheets.