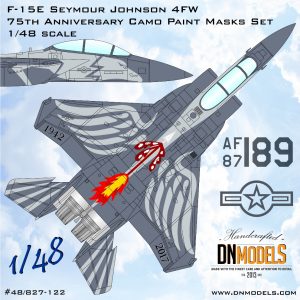 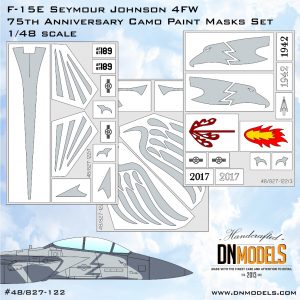 by McDonnell Douglas is the all-weather twin-seater variant of the F-15 Eagle. It is called the “Strike Eagle” and is designed to be high-speed interdictor, independent of electronic warfare or any other support aircraft. It is equipped with conformal fuel tanks, giving the jet extended range and ability to provide close support and combat air patrols using wide range of weapons and systems. Strike Eagle was introduced in 1988 and as of 2022 is still in production. Various countries accepted the jet in their arsenal, including South Korea, Qatar, Israel, Saudi Arabia, Singapore and USA. It is widely considered as the very best tactical jet fighter in production.

is an US Air Force Base in North Carolina. It is home of the 4th Fighter Wing, part of the Fifteenth Air Force, itself part of US Air Combat Command. The base is named after an US NAVY test pilot who lost his life in 1941. It is the only USAF air base named after a NAVY pilot in USA. Seymour Johnson is considered of great strategic importance for the US Air Force. For the 75th Anniversary of the 4th Fighter Wing, a demo camouflage was applied on F-15E Strike Eagle. 1942-2017 was written on the wings, in addition to feathers and eagle head applied over the dark painted strike fighter. The plane used was AF 87-189 and was flown in that anniversary camouflage in 2017 & 2018.

mask set covers the light gray eagle elements, as well as the years /on the wings/ and aircraft numbers on the vertical stabilizers. US Air Force Stars seen on one of the upper and one of the lower wings and on the nose sides are included. Specific elements like emblems and logos are not included due to their small and intricate details and must be applied in the form of decals. Latter ones are available from aftermarket companies. This mask set is based on G.W.H. kit and is designed in such a way, that both outside or inside masking elements can be used. It can be used with other quarter scale F-15E kits.