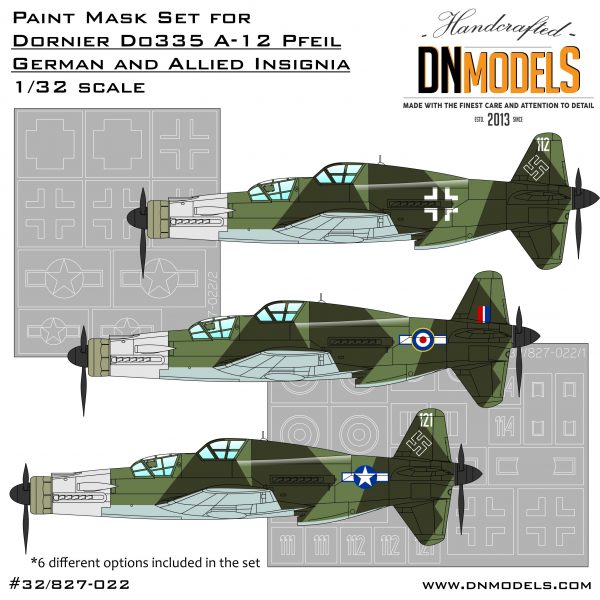 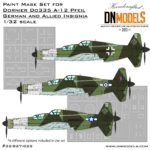 features stencils for Allied & German insignia applied on Luftwaffe and captured Dornier Do-335 A-12. The set feature six different aircraft, two allied and the rest German /different Werk Numbers/. For proper appearance, is best to use the pictures available on the web as a reference material. Of course, you can use kit’s instructions, but we advise to stick to the picture reference materials.

were painted in Allied insignia and their activity is unclear. They were used by USAF and RAF. USAF airplane might’ve never been used in US, but rather stayed in England, however sources vary. Due to the limited number of pictures and information about Do-335 A-12 in Allied hands, it is hard to gather confirmed information. Supposedly, only 3 Do-335 A-12 were built, one of which was unfinished. All of them ended into Allied’s hands eventually. It is confirmed that Royal Air Force flew one Do-335 A-12 Anteater for evaluation.

was the twin-seater version of the famous Do-335 Pfeil. It was used for training and as a platform for night-fighter projects that never happened. By the end of the war only limited numbers of Dornier Do-335 were available. Some of them were destroyed on the ground, thus is uncertain what was the exact number of built airplanes. Sources vary in colnclusions that A-12 were produced in larger numbers than currently accepted as confirmed. Some say that as much as 12 airplanes were completed. However, information is sparse and only three are confirmed to have existed.