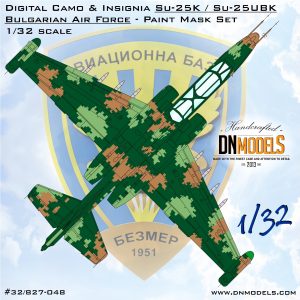 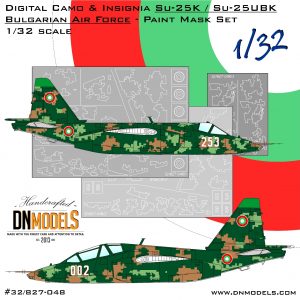 were sent to Belarusian 558th Repair Plant in Baranovichi and were returned between September 2020 and February 2021. All eight were overhauled with extension of their airframe and engine service life. The digital camouflage applied on the SU-25s is made by the Bulgarian Defense Ministry and is carefully picked for the colors to match the specific landscape of Bulgaria. The digital camo scheme applied is also one of a kind and used on those eight airplanes only. The Frogfoots were upgraded significantly and now they can carry a wider variety of weapons than before. They also feature enhanced electronics, HUDs and satellite navigation systems. Bulgarian Digital Su-25s are expected to stay in service up to 2028 and possibly even beyond.

paint mask set is suitable for both of the plane variants – Su-25K or Su-25UBK. The dual and single-seat Frogfoot jets are very different in appearance. Double seater profile of the UBK is much larger compared to the Su-25K. However, Bulgarian Air Force digital camouflage is identical on both. There are minor differences due to the fact that the transparent parts are larger on the UBK version. Other than that, the digital camouflage scheme of the BuAF is standardized.

The stencils – numbers and insignia – include all the options for Su-25K/UBK that this camo scheme is applied on. Those “bort” numbers are #002 and #095 for the dual seaters and #240, #246, #249, #252, #253 and #254 for the single-seaters. Total of eight aircraft wear this specific digital paint scheme and the mask set allows for any of them to be represented. As of the time of release of this set, there is no confirmation that other Bulgarian Air Force Su-25 will be overhauled and upgraded. If this happens, the planned “bort” numbers will include “1” and “7”, which are not included in this set, due to the fact that such planes are not overhauled yet and there is still no clear vision is this going to happen at all.

32nd scale kits, that this specific set of masks can be used with, are Trumpeter #02276 and #02277. Due to some discrepancies between the real Su-25K/UBK and the Trumpeter releases, some additional masking might be needed. This camouflage set is based on the real aircraft and is designed using very reliable drawings of the Su-25K and UBK. Trumpeter kits come with some geometry flaws, however they are still the only 32nd scale Su-25 kits on the market. Length and shape of the fuselage and vertical fins of the Trumpeter kits are considered to be an issue, hence some adjusting of the masks might be needed in order to achieve high level of realism when compared to the real aircraft.