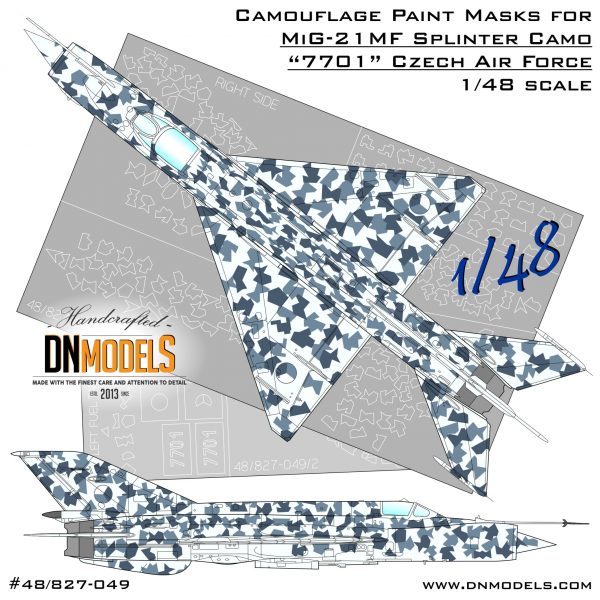 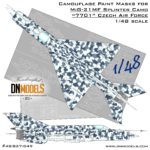 Czech Splinter camouflage was a demo scheme applied on a MiG-21MF. The “bort” number of the aircraft used was 7701. It was flown mostly at Air Shows. The camouflage was made from several almost identical spots, which are spread all over the aircraft. In real life, the Czech Splinter was painted in stages. Each stage was consistent of a specific color, with the spots corresponding being masked off. Then the next color was applied. Because of that, the exact same method is to be used when painting your model with this mask set. That way, you will be able to achieve maximum realism and color accuracy.

The original Czech Splinter project by DN Models was based on Eduard 48th scale MiG-21MF kit. Various modifications can be used: MiG-21M, MF and -21bis. In real life, -21MF was the specific version that was used for Czech Splinter #7701. Because of that, Eduard MiG-21MF will give you the best results when using this set. However, other manufacturer’s MiG-21s can be used as well. The mask set will fit most of those in 48th scale. This is the second version of the Czech Splinter released by DN Models. V.2 is with improved accuracy and additional spots. Therefore, the more accurate the kit you use for it – the better the results.

for this project are not specified in the sources that we used for designing the set. Because of that, you should pick your own colors that will match the reference photos. Be sure to use your best judgement when gathering the pictures and choosing the proper paints and colors. Because of the complexity of the scheme, patience and devotion is required in order to complete this project accurately. Due to the numerous spots, the project might take some time for completion. Therefore, attention is required when applying each spot and on the right position.

Usually, when painting a model is accepted to start off with the lighter color. Because of the complexity of the scheme, starting with whichever color is acceptable in this case. Since there are few layers of paints to be applied, thin layers are advisable. That way, the masks won’t show that there were layers applied and all will look like a single paint scheme. Because of the specifics of some acrylics, we advise you to test before you apply on the aircraft.

Mask set features all the spots and the insignia of MiG-21 #7701 Czech Splinter. In addition to that, fuel tanks spots and extra spots are included in the V.2 set.