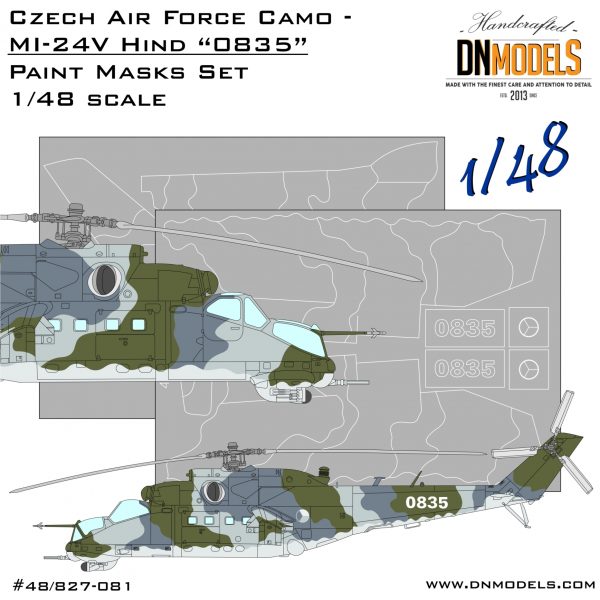 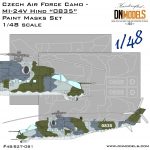 camouflage set is designed and based on the specific bort 0835, Mi-24V Attack Helicopter. The camouflage scheme is the one that Czech Air Force picked for their Mi-24s in 2000s and 2010s. The rather unusual and interesting scheme was used on many helicopters although the specific pattern varies slightly from aircraft to aircraft. Bort 0835 is one of the most popular and offers plenty of reference pictures. Thus this is the camo that is used as a basis for this set. Using the patterns and with minor additional masking, most of the other similar paint schemes can be replicated.

is available from Revell/Monogram and Zvezda. Any of the kits mentioned is suitable for this mask set. The size and shape of the spots allow for various modifications and are easily adjusted. The Revell/Monogram kit is very popular on the market and is considered relatively accurate release despite its age. Zvezda Mi-24 1/48 is the latest release, but it is yet to prove its qualities as a kit. However, knowing the quality and the fame of the Zvezda Mi-24 in 72nd scale, it is expected that 48th scale release will be as good as its smaller version. The latter one won many awards and is considered one of the best representations of Mil Mi-24 attack helicopter on the modeling market.