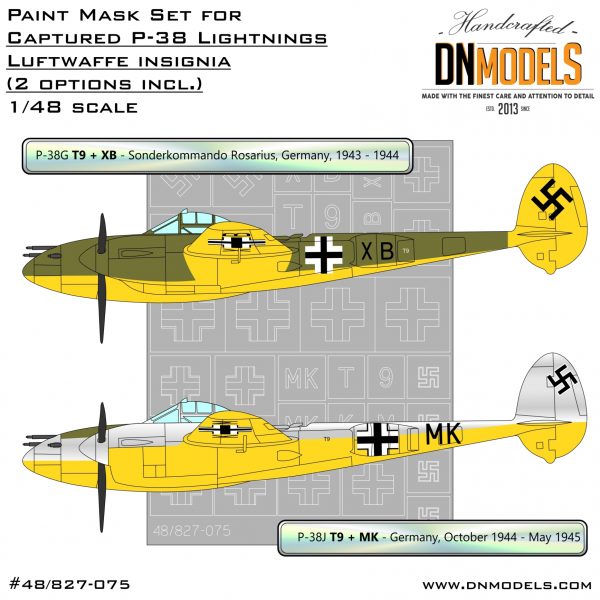 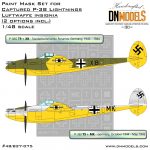 is a set designed to cover the two known Luftwaffe P-38s, that were used to evaluate the Lockheed twin. Little is known about the plane history with Luftwaffe, but there are some pictures from that period. They show new markings and new colors, which may vary depending on your source. Masks in this set cover everything necessary to complete any of the 48th scale P-38J or G versions and make it into a captured Lightning with Luftwaffe insignia.

was captured sometime during 1943. It supposedly belonged to Fifteenth Air Force and was used by Luftwaffe for evaluation in Berlin. This plane never flew with Luftwaffe, because both of its engines were damaged due to usage of improper fuel grade. Later on, the code T9+XB was transferred to a captured De Haviland Mosquito.

was part of 354th Air Service Squadron, from which it was supposedly stolen by an allied pilot with German ancestry. The plane was first taken to Milano, Italy, in 1944, from where the Italians handed it over to the Germans. The plane was painted on the underside in yellow. That was the typical paint scheme for captured aircraft. Before that, it was bare metal.  After only months with Luftwaffe, and quite ironically, the plane was re-captured by the US troops in May 1945. After that, the P-38J was eventually re-fitted for US service once more as an F-5E photo-reconnaissance plane.