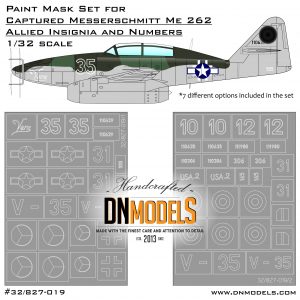 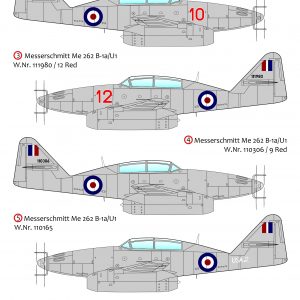 features stencils for Allied numbers and insignia applied on captured Me-262B. The set also includes markings for license-built CS-92. That was the Czech version of the dual-seater Me-262 jet. Two numbers are widely known: V-31 and V-35. For proper appearance, is best to use the pictures available on the web as a reference material. Of course, you can use kit’s instructions, but we advise to stick to the picture reference materials.

were painted in Allied insignia and some featured handwritten numbers and art. They were used by USAF and RAF.  CS-92 were used post-WWII in Czechoslovakia. Those were built by Avia and were relatively short-lived. However, CS-92 featured unusual single-tone camouflage and standard post-war Czech insignia. Of course, typical for the time, the insignia was with bright blue, red and white colors. Although camouflages of the Luftwaffe were far more attractive, the CS-92 insignia is still very popular to this day. Many model kit manufacturers put those on their boxarts. Because of that, the set includes CS-92 options as well.

or serial numbers of the Me-262 included in this set are all based on reference photos only. There is some misalignment visible on the pictures. Of course, that is most likely a style of application rather than mistake. The Werk Nummer is divided into pairs. First and last pair are aligned while the middle /third pair/ is slightly up from the others. You can cut the mask and align the Werk Numbers as you feel fit for your model.

Proper placement of the insignia should be done according to reference pictures. Sometimes manufacturers provide instructions with misaligned insignia and/or misplaced or missing elements. However, the instructions can be skipped or combined with proper reference materials in order to get maximum realism.

Because of the very sparse information about Messerschmitt Me-262B, proper application of insignia presents a challenge to the modeler. Nevertheless, it can be done on the basis of what is available on the web. Of course, it is up to the modeler how the project should be approached and executed. What you will see on the actual product sheet is not the camouflage scheme of the aircraft shown. It is only a reference for the position of the insignia. Hence, for proper appearance of your model, please refer to original aircraft pictures available on the web.