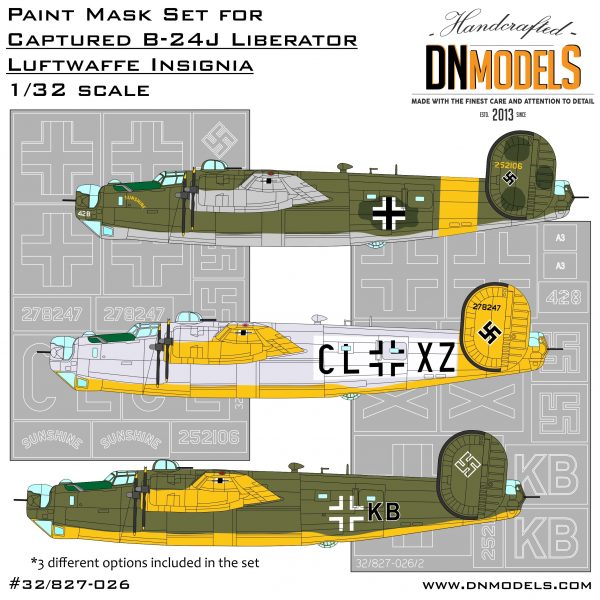 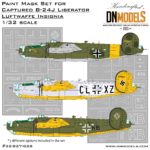 were used by the Germans altogether with Mustangs, Thunderbolts, B-17s, Lancasters and other aircraft in various roles. B-24 Liberators used by Luftwaffe were several different variants, some of them captured due to forced landings made by the Allied crews on German-controlled territories. Those aircraft were painted in different schemes, however very little information remains as of today. The set features three of the popular B-24 Liberator options, but there is probably more information on the subject, that is hard, but not impossible to be found.

Since decals have carrier film and cannot be weathered with enough realism, this set provides an alternative approach to solving that problem. Application of paint instead of decals present you with the option to chip the paint and alter the colors of the insignia and numbers, as well as to avoid decals carrier film seen on the decal. Due to the enormous size of the B-24 Liberator in 32nd scale, this is the best method for markings application. Luftwaffe insignia included in this set is based on the very few pictures available on the web. Additional research is advisable in order to recreate good replica of the captured Liberators. Dark spots on the aircraft cover the original Allied insignia.

was a Luftwaffe special operations unit during the WWII. Germans used various airplanes to make reconnaissance flights, especially long-range ones and for that purpose they used captured B-17s and B-24 Liberators. There are some claims that Liberators were used to infiltrate Allied bomber formations, as well as in recce-missions deep behind enemy lines. Some of the aircraft used were destroyed by the Germans themselves when they fled the airport that they were using. To this day, information about Kampfgeschwader KG 200 remains sparse.