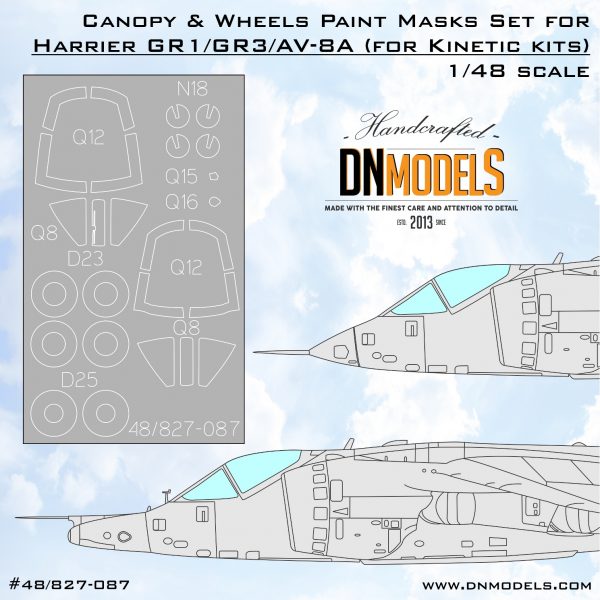 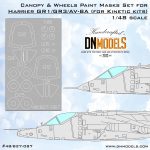 kit from Kinetic GOLD series is first of their line featuring Hawker Siddeley GR Harrier in 48th scale, which consists of #K48060 (GR.1/GR.3), #K48072 (AV-8A) and a repack from AMMO by Mig Jimenez featuring VA-8A Matador kit #AMIG8505. These kits feature different variations of the same plane, which are covered by this DN Models canopy and wheels mask set. Despite being presented as different kits, parts inside are the same, since they basically represent similar airplanes. This mask set covers those versions of the Harrier and not the previous Kinetic releases, which feature twin-seat T-Harrier and Sea Harrier options.

variants from Kinetic is the latest and by far the most advanced kit of the S/VTOL airplane on the market. Because of the lack of contemporary tooling besides this one, Kinetic is considered the best first generation Harrier kit in every scale as of release date of the #K48060 /beginning of 2021/. Despite having some minor issues, Kinetic GOLD series Harrier kits are well designed and nicely molded and they feature crisp and abundant painting options in the form of decals. Those decals can be substituted with aftermarket options, best of which are being paint mask sets, which guarantee maximum realism of the finished product. Harrier sets with different markings are available in DN Models’ line of sets.