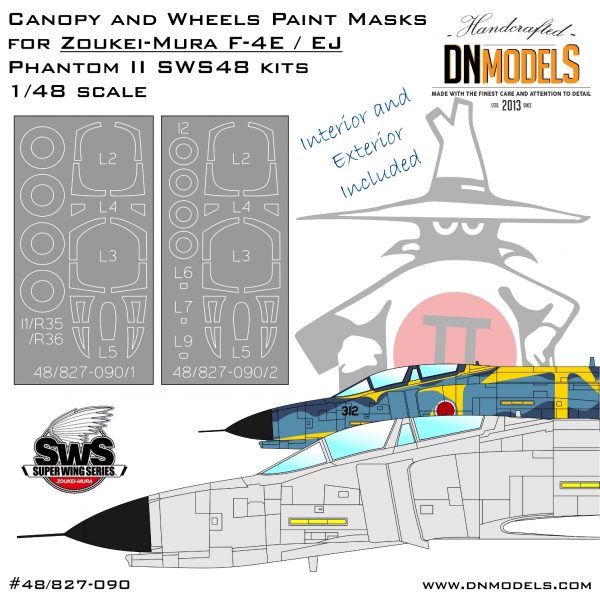 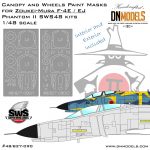 Interior and exterior masks are included in the set

Interior and exterior masks are included in the set

The set includes two sheet of masks (shown in the picture). The masks are made from thin masking tape, which is easy to be peeled off and doesn’t leave any stains. The tape is tested on clear and painted model too. If carefully removed after painting, they can be used over and over again. It is flexible and easily applied over curved surfaces. Semi-transparent for easy and accurate placing.

for F-4E and F-4EJ includes interior and exterior. It also features wheels and lights masks designed specifically for F-4E line from Zoukei-Mura in quarter scale. The set will cover all Zoukei-Mura E-variants and their derivatives, for example F-4EJ Kai. It is not suitable for J,C,D and S versions released earlier by Zoukei-Mura. They are covered by another set also released by DN Models. The main difference is that this set includes interior masks as well, while the previous one features outside masks only.

kit was initially released in the summer of 2020. The very first set represented F-4E Early version from the US Air Force. The kit was quickly followed by F-4EJ Kai Limited Edition – painted in special scheme – which will be followed by standard low-visibility grey painted F-4EJ Kai. More versions based on the E-type will be released. This set is designed to cover them. Immediately after its release, Zoukei-Mura E-type was accepted as the best F-4E kit on the quarter scale market. It is considered by many as the very best F-4E Phantom II kit in any scale released so far. The accuracy of Zoukei-Mura kits is notorious and their detailing is superb.