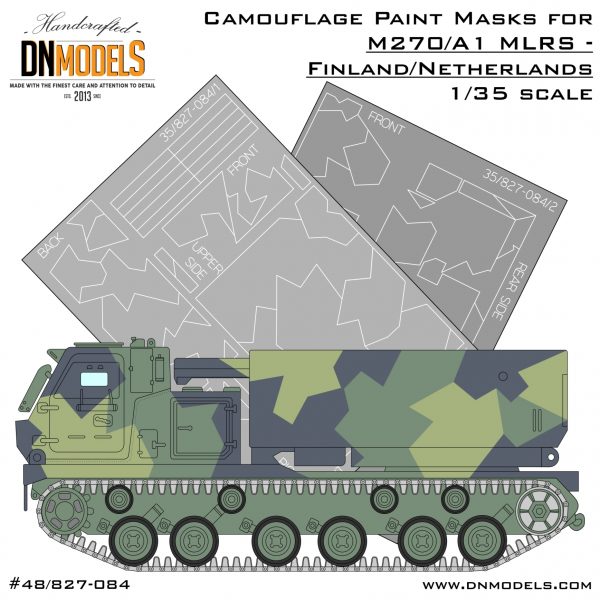 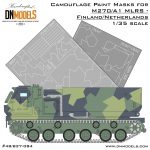 The set includes two sheets of masks (shown in the picture). The masks are made from thin masking tape, which is easy to be peeled off and doesn’t leave any stains. The tape is tested on clear and painted model too. If carefully removed after painting, they can be used over and over again. It is flexible and easily applied over curved surfaces. Semi-transparent for easy and accurate placing.

is a multiple rocket launcher used in various countries. Depending on the area, the camouflage of the M270/A1 can differ significantly. The one represented in this set is typical for Finland and Netherlands armed forces. The camouflage scheme resembles the splinter camo scheme seen on Saab Viggen. The colors are somewhat different, but the idea behind the camouflage structure are similar. In areas with dense flora and dark green colors, this camouflage prove to be highly effective. The structure of the vehicle and its shape allows for easy application of the masks and for various weathering techniques on each of the paint layers.

M270/A1 is an improved and upgraded version of the M270 rocket launcher. It features new mechanical systems and new fire control system compared to the original M270 MLRS. The Finnish army is the current user of this specific camouflage. Netherlands are a former operator, with their M270s transferred to and used by Finland. Among other users of the M270 versions are USA, France, Germany, Israel, Egypt, Japan, Saudi Arabia, South Korea, Turkey. Most of the latter use different camouflage schemes, with this specific splinter camo being typical for Finnish Army. Currently the M270 MLRS is still undergoing tests for further upgrades for additional service life extension.