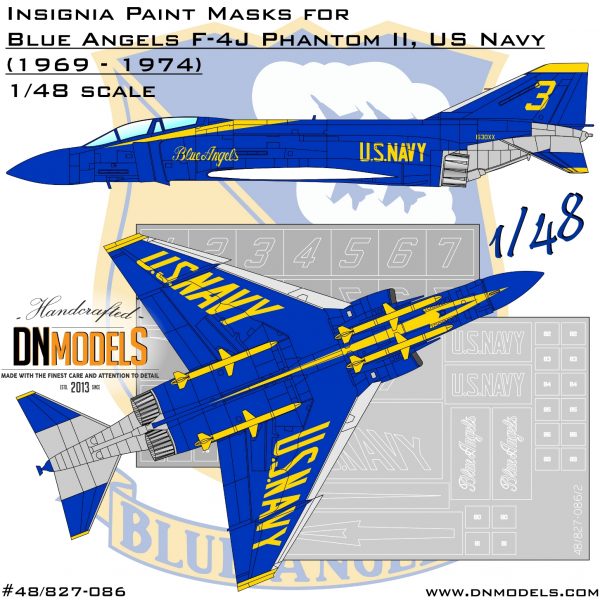 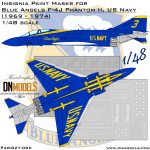 This set includes the yellow markings, the letters and the numbers for planes from 1 through 7. It does not include the McDonnell Douglas sign and logo and the Blue Angels patch on the nose.

This set includes the yellow markings, the letters and the numbers for planes from 1 through 7. It does not include the McDonnell Douglas sign and logo and the Blue Angels patch on the nose.

was used parallel with the F-4E Thunderbirds and that was the only time when the two demo groups displayed similar airplanes. However, due to the low cost-effectiveness of the F-4 Phantom, both Blue Angels and Thunderbirds switched to smaller and more economical aircraft. Blue Angels used the F-4 from 1969 till 1973. F-4J was painted in the standard Blue Angels scheme and this mask set covers Blue Angels 1, 2, 3, 4, 5, 6 and 7. The Blue Angels patch featured on the nose of the aircraft is not included in this set and should be applied as a decal that is either home-made or an aftermarket. Due to some limitations of the masking film and the cutting technology used, this patch cannot be replicated with satisfactory results in that scale.

kits that can be used alongside this set are various, but it will probably work best if Academy, Hasegawa or Zoukei-Mura kits are used. That includes the kits re-packed by other companies, for example – the Limited Edition Eduard kits. Blue Angels used J-model of the F-4 and that is the proper version that should be painted in the Blue Angels scheme. Since numbers 1 through 7 are included in the set, more than one airplane can be painted using the masks. Have in mind that for repetitive use of the mask foil it needs to be treated with care and with mild and non-aggressive mediums. This however does not guarantee that it will work several times and that is dependent solely on the modelers’ skills.