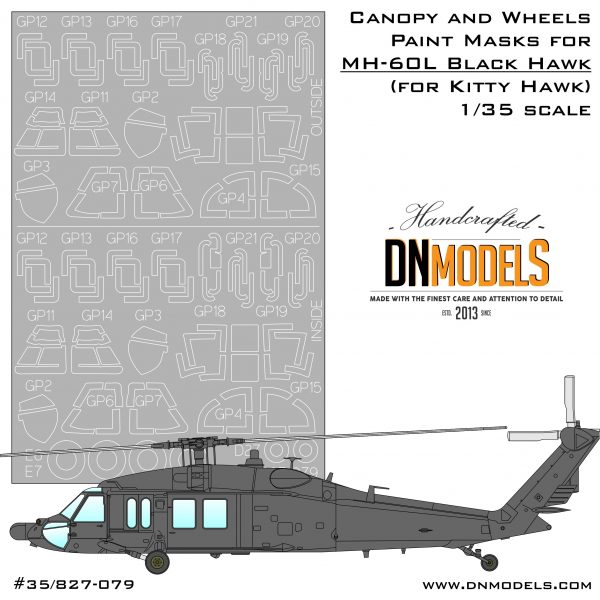 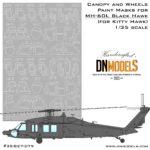 The set includes one sheet of masks (shown in the picture). The masks are made from thin masking tape, which is easy to be peeled off and doesn’t leave any stains. The tape is tested on clear and painted model too. If carefully removed after painting, masks can be used over and over again. The material is flexible and easily applied over curved surfaces. Semitransparent for easy and accurate placing.

is the stealthy looking black helicopter notorious all around the World, due to its survivability and practicality. However, MH-60 gained most of its fame because of the movie Black Hawk Down. The MH-60L is a version that was used as a gunship and from the Special Operations Teams of the US Army. It is used from other armies as well, but it was recognized widely after its participation in the Battle of Mogadishu in the early 90s. Two helicopters were downed, but after a long and very tough battle US forces manage to achieve the goals of their mission. The Battle of Mogadishu featured Little Bird as well – a release that Kitty Hawk did couple of years ago and that perfectly completes this MH-60L Black Hawk as a set. Both of the Kitty Hawk releases are in 35th scale.

is the latest and so far the most sophisticated kit of the Black Hawk Helicopter available. It is in 35th scale and represents very accurate miniature of the famous helo. The kit is a new tooling with no competition except for the Academy’s obsolete tooling, which is surpassed in every possible way with this release. In 35th scale it is decently sized and very nicely detailed inside and out. Kitty Hawk have planned many versions of the Black Hawk in their upcoming releases, including Rescue and Sea variants.