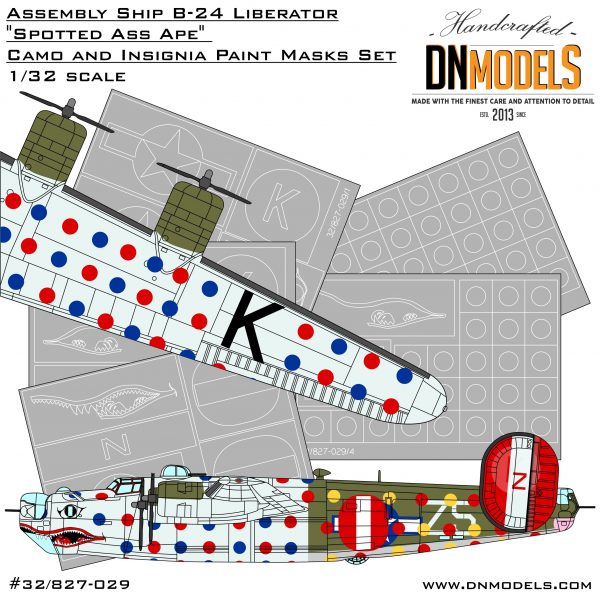 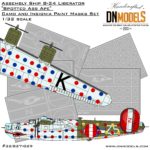 Two variations of the Aircraft are doable with this set

Two variations of the aircraft are doable with this set

paint mask set is designed to be used with Hobby Boss #83211 kit. The mask set is dedicated to one of the many Assembly Ship aircraft, used to gather formations of many similar Liberators and send them on their mission. Assembly ships were also called Judas Goats, due to the similar role that they represent. Also called Formation ships, those were usually old aircraft lacking armament and often painted with bright colors and featuring additional lightning. Due to the many specific and colorful items featured on this Liberator, masking and painting those out is the most realistic way of representing this particular scheme. Since decals have carrier film and cannot be weathered with enough realism, this set provides an alternative approach to solving that problem. Application of paint instead of decals present you with the option to chip the paint and alter the colors of the insignia and numbers, as well as to avoid decals carrier film seen on the decal. Due to the enormous size of the B-24 Liberator in 32nd scale, this is the best method for markings application.

is the second Liberator painted with that polka dot scheme. The first Assembly Ship Liberator in that scheme was B-24D called “First Sergeant”. After an accident with that airplane, another one was painted in almost the same manner. It is the aircraft represented in that set. It was B-24H #42-40127 and was seen in two options: with or without the polka dots on the rear fuselage section of the aircraft. The original insignia was visible beneath the Assembly Ship markings, thus it is also included in the set. This set can be used to create either one of the two variations of the Spotted Ass Ape – with or without the polka dots on the rear. The aircraft was lost on landing in March 1945 when it gear collapsed.