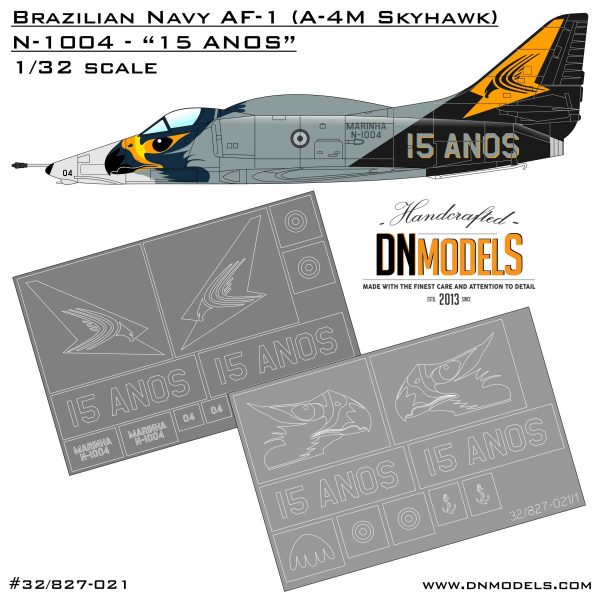 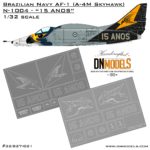 is dedicated to 15 Years Anniversary special scheme applied on Brazilian NAVY Skyhawk. This paint scheme is very attractive, due to the dark tail and the aggressive front of the aircraft. The number of the aircraft featured is N-1004. During the last decade, Skyhawks used in Brazil are modified by Embraer and are planned to remain in service up until 2025.

are very popular due to the fact that Brazil is one of the very few countries that used aircraft carriers. The Skyhawk featured in this set is from Brazilian NAVY and is one of the many Brazilian carrier based Skyhawks. The blue-ish grey camouflage scheme in combination with the bright yellow parts of the insignia makes them very attractive. This demo scheme adds to that. Douglas A-4 is an old jet, with obsolete concept, but Brazil managed to utilize it and make it work well into the 21st century.

Brazil bought second-hand A-4s. Even though Brazilian Marinha jets are ex-Kuwaiti birds, they were very well preserved. Because of the favorable conditions in Kuwait and due to the low airframe hours, the planes were in excellent condition. Therefore, Brazil choose to modernize their Skyhawks and hired Embraer to complete the job. As a result, a contract was signed in 2009. The modernization was deep and challenging and due to that it took a while. The upgrade features new navigation, weapons, tactical communications and sensor systems and most noteworthy – a multi-mode radar from IAI Elta Systems of Israel. The first aircraft modernized by Embraer was delivered in 2015.