T-14 Armata is the newest Russian Main battle tank demonstrated to the public. It is based on so called: Armata Universal Combat platform. This is design meant to be used for several different vehicles, only one of which is the main battle tank T-14 Armata. It is also know by the name Obyekt 148. Russian Army plans to use it as a Main tank, replacing T-90 and its derivatives, which is supposedly about to happen before year 2020. Alongside T-15 /the successor of Infantry Fighting Vehicles based on the Armata platform/, those two represent the newest generation in design and technology when it comes down to armored vehicles. There are of course rumors that Germany/France, USA and even Israel are currently working on next generation tanks, but those are only rumors. 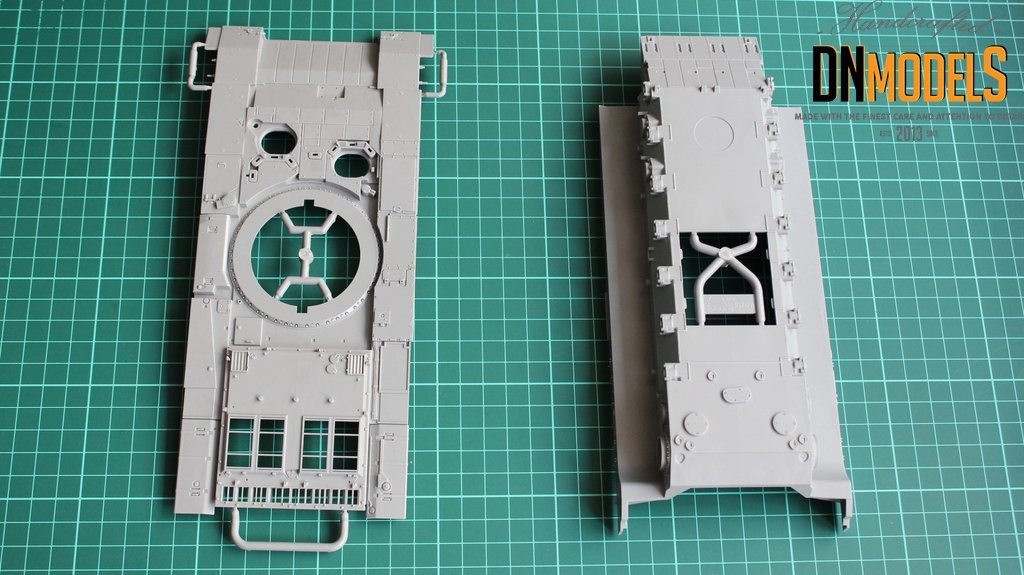 Shortly after the 2015 Victory Parade, Takom and Panda released 35th scale versions of this tank. Shortly afterwords, rumors appeared that they are not accurate and are more like speculations of the real thing, instead of a precise scale model. Happily, in the short half ot 2016, Zvezda announced that they are about to release their own version of T-14 Armata. Not only that, but Zvezda designed their T-14 alongside Ural Vagon Zavod – UVZ, the factory which produces the real thing! This is very interesting combination and if we can count on honesty here /this is Army stuff after all!/ the scale model is to be the best representation of the real Armata in scale. 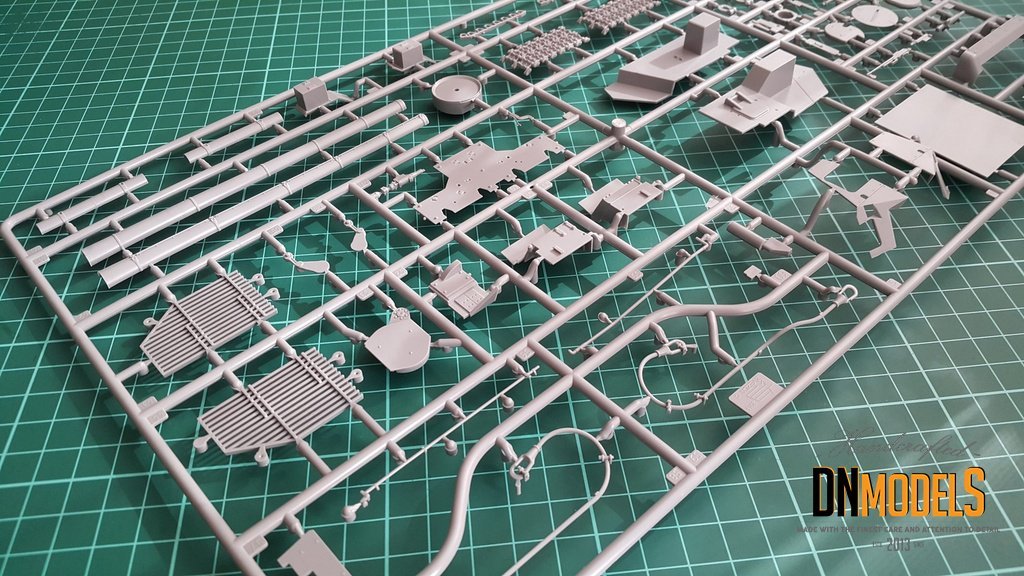 On the back of the box we have description of what Armata is, not without the typical Russian propaganda, model’s length, parts total number, some pictures of the built model and a QR code. The latter one seems to be non-working, however it is a huge leap ahead compared to what we had before with Zvezda kits.

Inside, there are few milk-ish plastic envelopes containing the sprues, a leaflet with instructions and a plastic zip-bag holding the clear parts, two types plastic meshes and decals. 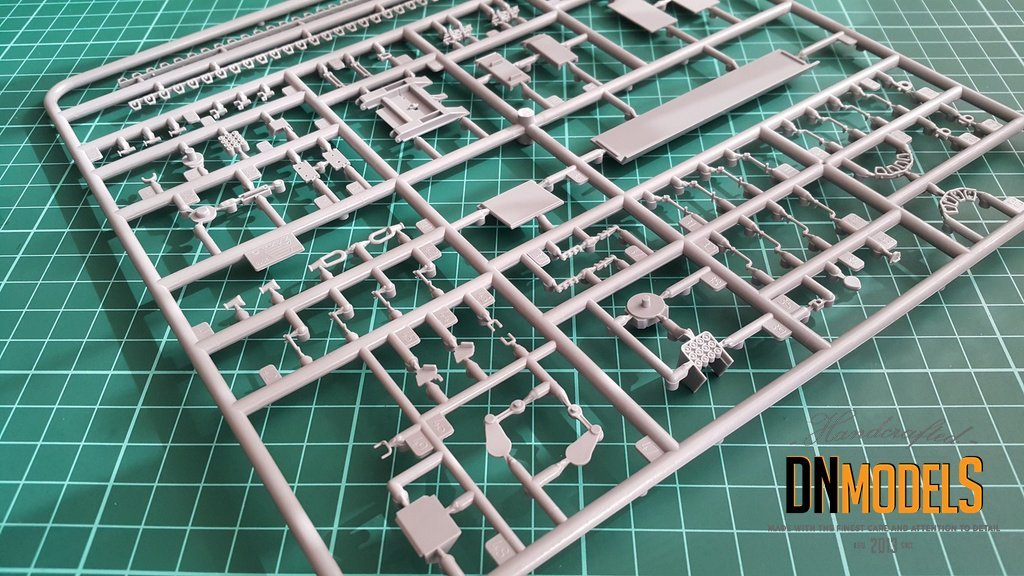 Sprues seems to be acceptable in terms of quality. They lack texture but the details is pretty good. There is an improvement in Zvezda’s quality of engineering. Still, the plastic probably needs to be changed in order for Zvezda to play with in the “A” league. I haven’t seen or heard of any serious troubles with the material, so texture is not going to be an issue for most modelers, especially those good with some primers available on the market. After all, there are several coats of different mediums before the final result and as a base, this plastic is acceptable, especially considering the price of the kit. 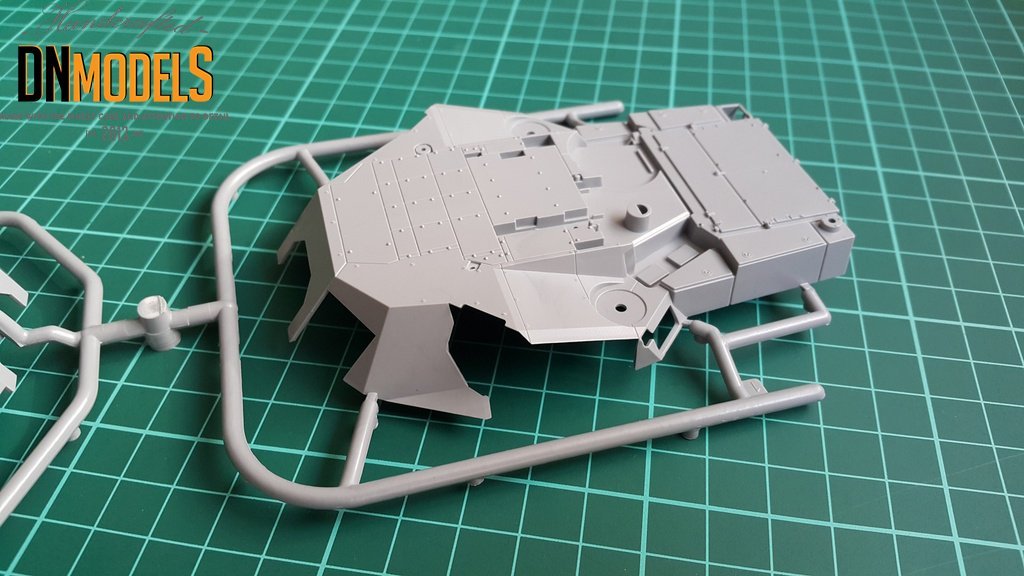 Instructions are a letdown, no doubt about it. They are short leaflet, resembling Tamiya’s foldings, only black and white, without many explanation what is what /seen on many new instruction sheets recently/ and poor camouflage schemes. Camo scheems actually are the worst part of the instructions and of the Zvezda kit. There are only two profiles, one of which is the three tone camo. Except for the boxart, which shows 3/4 upper look of Armata, there is no way for the modelers gussing how the camo pattern continues. This is pretty lame decision in general. There is a get-outta-jail-free-card for Zvezda in this case – the fact that there are no Armatas in camouflage shown yet. So since this is probably artist fiction, the modeler can experiment with the pattern as well. However, compared with Takom’s brilliant camo schemes in their Armata, this instruction leaflet is purely worthless. The single tone camo scheme is self explanatory. But yeah. Bad call with the instructions. 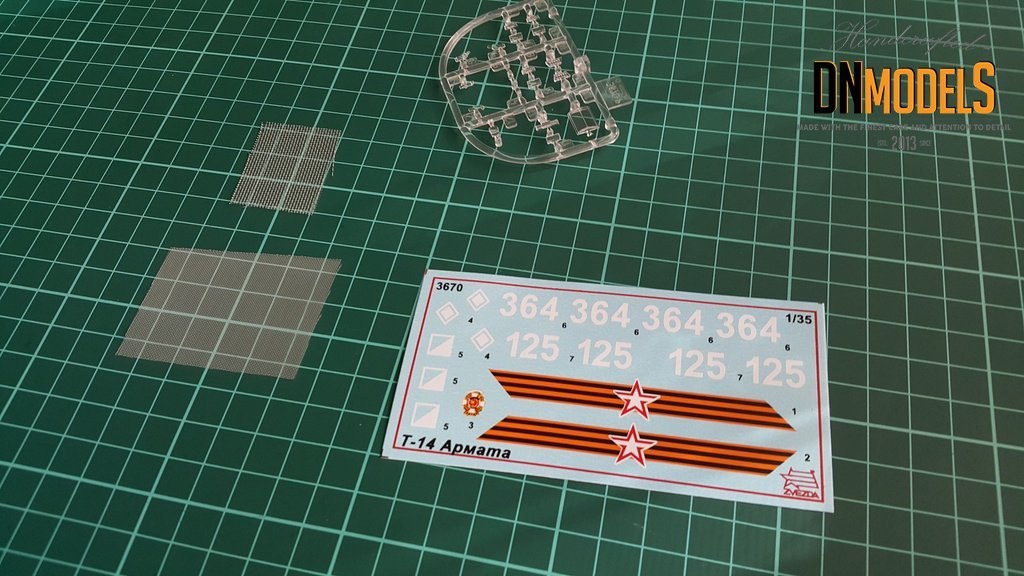 Clear parts are small, hardly visible on a tank, but they are good. I like the overall look of that sprue. The meshes are palstic – again Tamiya like – and it will be great if somebody releases a photo-etch substitute for that. Maybe DN Models sometime soon? Who knows… 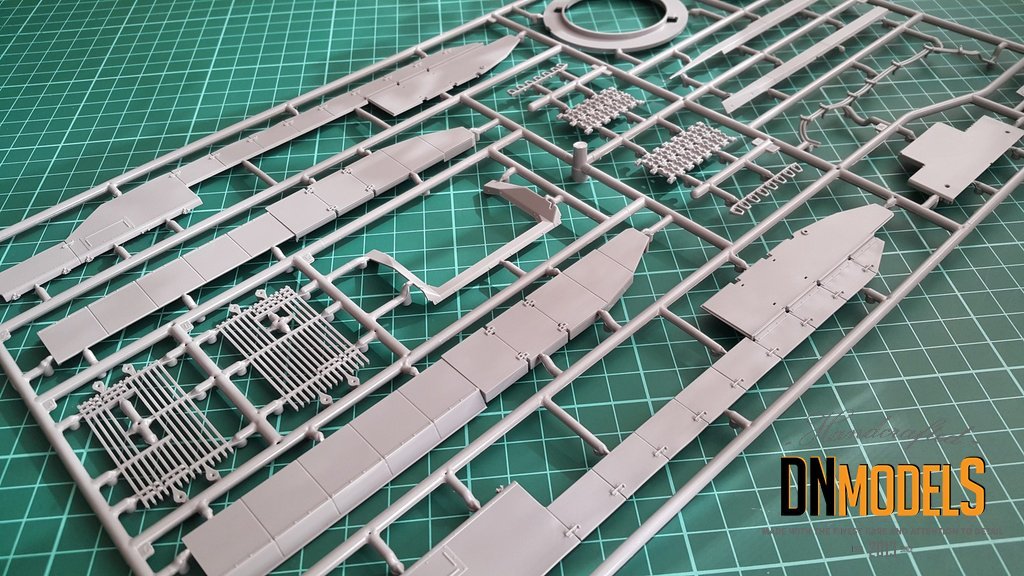 Decals are /as far as I was informed/ Begemot, which if true, is a decent choice. No information on new markings besides the parade vehicles though. So again – too fresh of a subject to comment. But they are not bad.

The tracks are just like the ones we’ve already seen in Zvezda’s T-90 and BMPT Terminator. In this case, fenders are hiding most of it, so this is a useful add-on, and I prefer it, especially for modern tanks. I like the way Zvezda did their track and I love their molding. So for me this is a rather high point in this kit. 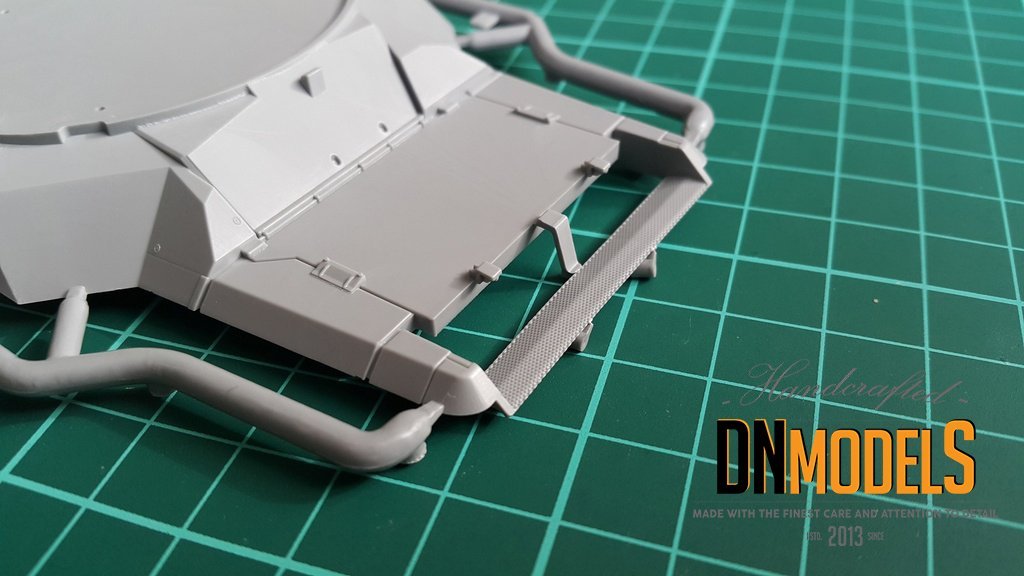 The gun barrel is – unfortunately – a two piece solution. This is old and obsolete way of doing things but again – price is some sort of an excuse for that decision. Metal gun barrel is out of the question of course – they didn’t put in PE material nor color instructions, so metal gun barrel is beyond reasonable wishful thinking. Thankfully, Voyager Model already released one on the market, just in case you want to superdetail your Armata. At the price of the kit itself probably… Voyager also did some smoke dischargers for Takom’s kit, which might come handy here and Friul announced Metal Track set. It seems like the Armata Market is growing. 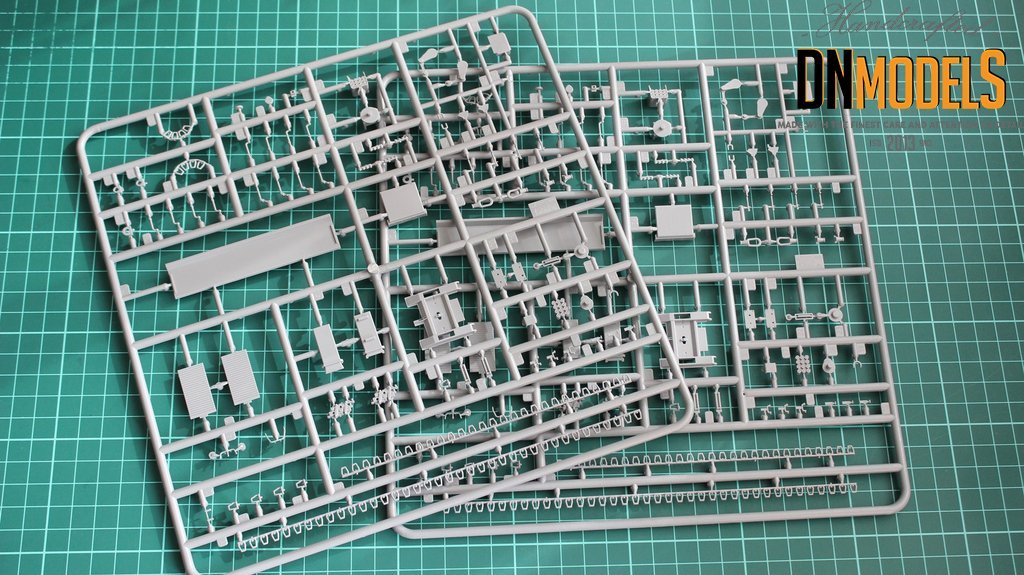 In conclusion: this is a very good kit for extremely competitive price. Takom’s T-14 Armata for example is twice the money, with less accuracy. Yes, the instructions are nothing special and the camo schemes sucks /politely said/, but folks, this is Zvezda. They are gaining speed at the moment and we must give them that. They are working hard to be competitive and with that tempo in 7-10 years they will be at very high level. With those prices they offer killer kits. Never mind the market, Zvezda is cheap enough everywhere. The most important fact in this particular case is the accuracy which is not comparable with the competition. Actually, there is no competition for Zvezda. UralVagonZavod got their back for the T-14 Armata, and that’s it. Nobody can beat that. Most likely, the Russians won’t let them. 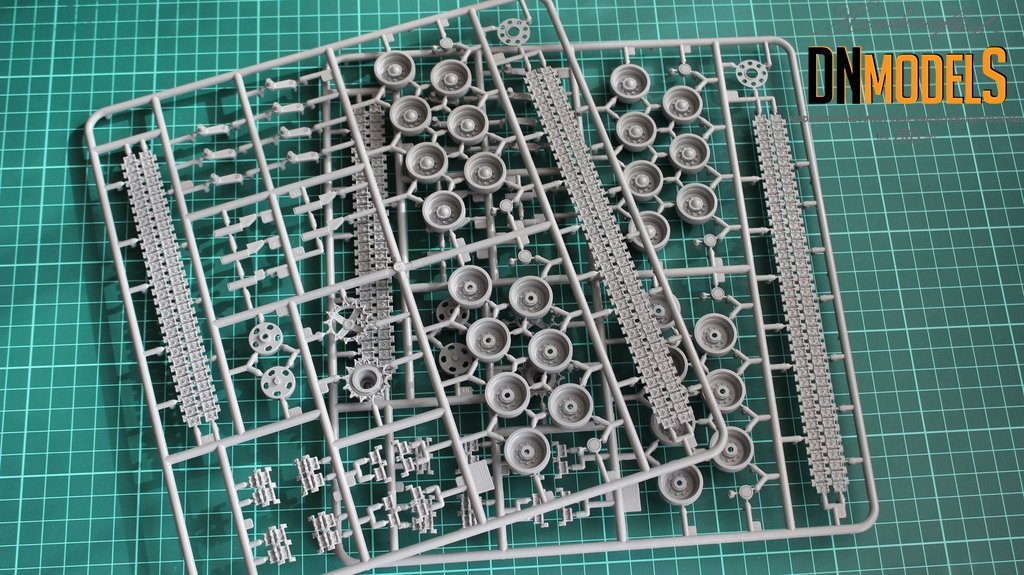 So I can only highly recommend this kit. Just for the price. Or just for the accuracy. Or just for the fact that if you need to be accurate when painting, so far there are only single tone Russian green camo schemes shown to public. We gotta give them that – Zvezda made a great kit.

Kurganetz, Koalitzia, Boomerang are also on their way. Probably with low prices. Hopefully their camo schemes will be better. But yeah, for now – go for the Zvezda’s new T-14 Armata. Looks great and it’s cheap. What can be better than that?

Check back with DN Models soon for masks sets for Armata Tanks.