Year of the Abrams was something that I thought it would be an isolated period, when a model receives a lot of attention and is re-tooled by different companies because of Gulf War anniversary. However, it seems that it is not the case, since in 2018 we are about to witness Panther invasion of similar kind. Sd.Kfz.171 is one of the best tanks of the Second World War and it is considered to be a game-changer in many ways, a step above Panzer IV and just enough, but not way too much as King Tiger. Even though in my opinion King Tiger is the best tank of the WWII, many experts consider the Panther more revolutionary vehicle.

With that said, it is no surprise that companies are interested in releasing that. Dragon of course have several options, most of them brilliant. However the slowly growing prices and the lowering quality of their kit contents’ – missing Magic Tracks, less PE and so on – made those kits ill-famous and purposely avoided. Zvezda has to offer something on the other end as a price, but nothing like in quality, although the kit is decent. In the middle we have Tamiya’s latest Panther tooling, which is OK, but if you don’t get enough aftermarket, Tamiya produced or others, it won’t be sufficient as a kit for the professionals. 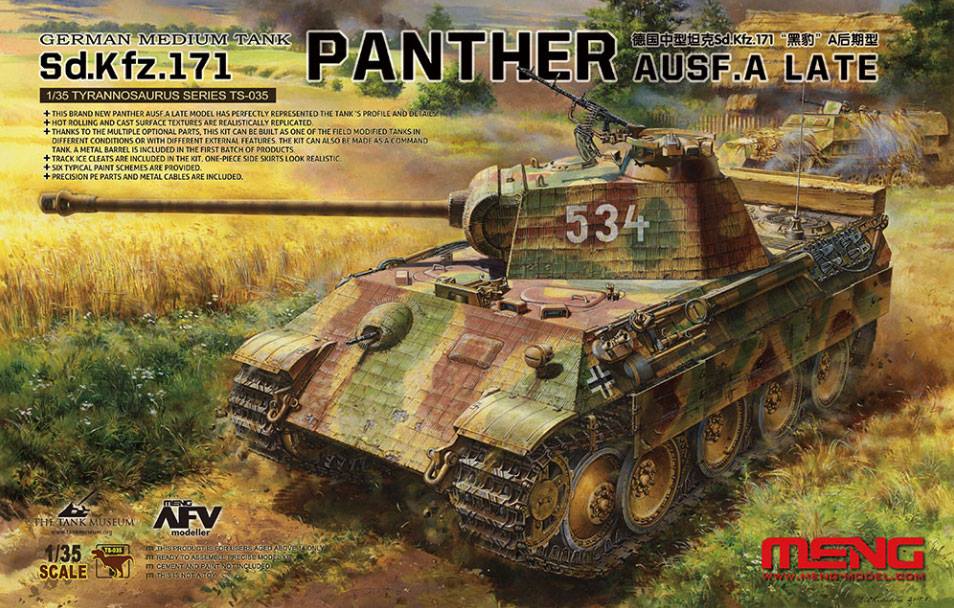 Now in 2018, obviously the situation will change. MENG model already tried to change it with their version of the Panther, but someone payed enough attention and exposed a simple fact, that MENG kit is inferior to DML. That by itself is ridiculous, since MENG are often quoted as one of the best companies on the market, but are actually not.

So now, we have upcoming Rye Field Models, Academy and Takom. For Academy it will be a wheel of fortune situation, since they have beautiful kits, like their F-4 for example, and they also have some kits that worth nothing and many wonder how it is possible a modern company to release such. So we will have to wait and see on what is about to come from South Korea. 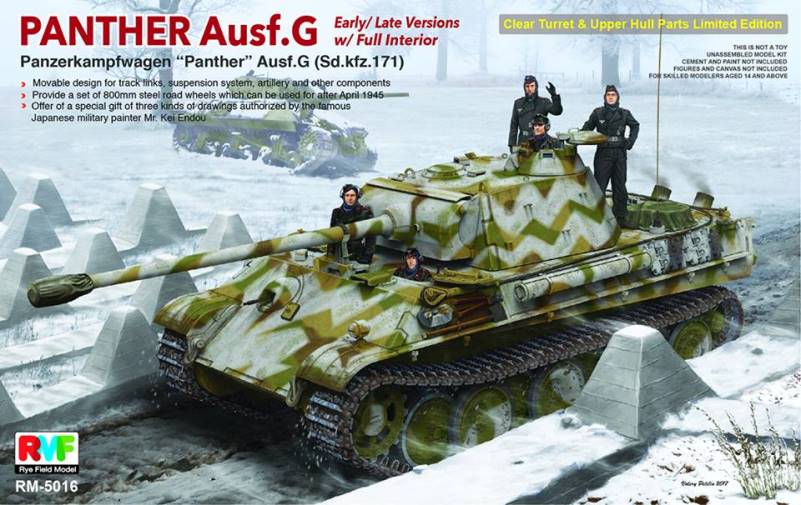 RFM – here we are talking full interior. They are famous for producing sophisticated kits, clever engineering and beautiful boxarts /that is only for collector type modelers/. Rye Field are relatively new company, but already have proven to be very challenging on the market. The kit is a combo between Late and Early G version, clean turret and movable parts. Among those are the suspension and the tracks of course. The full interior will be challenging but it seems to be a risk worth taking, knowing their other interiored kits.

And then comes TAKOM. That is the most promising set /sets actually/ in my opinion. Although it is Panther Ausf.A, we have again Early and Late options, full interior and Takom quality. They deserve attention because of the beautiful M3s and T-55s released lately. Also, the fact that they offered a beautiful King Tiger with several options and interior is another factor here. T-55 series are full with various options and I trust that Panther tank will be next in line for such a re-boxed vehicle from TAKOM. 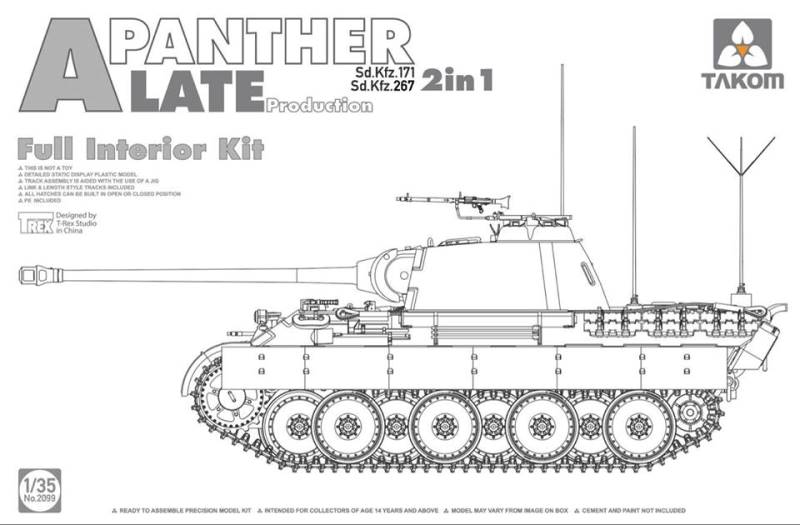 It is too early for conclusions, that is for sure. However 2018 seems to be the year of the Panther Sd.Kfz.171. Academy, MENG, Rye Field Model and TAKOM. That is a lot. And they are all just getting started. We are about to see reboxings and different variants, unusual ones too, with and without interior and/or zimmerit. Panther was also a tank that had some experimental camo schemes in the last days of the war and a fair amount of captured vehicles too. That will be a good base for advanced modeling! So let’s wait and see what we will have at hand quite soon and most importantly – let those companies struggle competing, working harder and harder to provide us with the best possible kits in scale seen to this date. This fierce competition will have one winner in the end – the modeler.