After “Fury” movie came out, Sherman fans were over-excited, and not without a reason. Tamiya issued a 2014 version of reboxed Tasca Easy Eight, and also so quickly they started removing it from the shelves, which made the kit very very attractive with prices exceeding 100$ at eBay at some point.  In the same time, Tasca, which were always pricy, were not so available, but still very popular among Sherman experts. In 2015, Asuka Model started issuing reboxed Tascas and they pretty much filled the whole gap from Tasca, providing us with Sherman 13 versions for 2015 alone. Including Easy Eight of course. The “Fury” tank…

However, this was “same ‘ol” kit, and eventually, Tamiya made very clever choice to take a step aside from the path well known. Well, not so “aside” but slightly modifying their M51, they announced a new tooling of Easy Eight, and in the very first days of 2016, ordered kits started arriving to their new owners. So in other words, late 2015 the tank was available. Among these owners, I found my place too, receiving it in perfect condition, and once opened the box, the only thing I felt was pure pleasure for the eyes.

Upper part of the body. Note the welding marks and texture around the hatches.

So onto the kit: First off, it is Tamiya. That word means simplicty, accuracy, just enough detail, and perfect, flawless fit and assembly. From what you can see on the sprues here, this is 100% the case too. The very first thing that needs to be noted is the texture. Around the hatches, of the turret /even on the bottom part of it, which is not visible/ on the sides. It is awesome! I mean, it is beyond what you can replicate applying Mr.Surfacer or any other method.

Texture here is second to none.

Second thing I noted and made me very nice impression is the gun barrel. It is one piece, slide moulded, and only problem /isn’t actually a problem for non-lazy modelers/ is the muzzle break which is in two pieces. Not that metal gun barrel won’t spice things a bit, but even without it, the kit has enough to offer.

The clear parts are quite few, and they are clear, but having in mind that this is Sherman, and overall – a tank, they don’t matter that much. The tracks /T-66 type/ are a bit of a let down for most of the modelers, but honestly – they do just fine, and I can confirm it, because I used them on my M51 couple of years ago. They are more flexible compared to other brands like Academy or AFV Club, the sag is somehow realistic and most importantly, if weathered properly – you can use them without a problem. That is because the original tracks of the Shermans looked like they were rubber made anyhow. Maybe because of the odd sag, the odd tension of the idler and sprocket, I don’t know. But the conclusion is – the vinyl tracks will do just fine. Tamiya usually make their case with decisions like that – Abrams for example has vinyls but since the sag is not visible, they are perfect for it. Leopard too. In other cases, where options are available – their Panther D for example – Tamiya offer aftermarket link by link tracks. So if they decided that the Sherman can be done OOTB with those tracks, and not provided us with an option, so most likely that will be the case. Sure, Friul have number of options, if you decide to go the Heavy Metal road, but they cost more than the M4 itself. The only question for me stays, is the two types of tracks offered by the Hungarian company will do the job for the sprockets provided.

Those two could’ve been better.

The wheels, suspension and the sides under the fenders are nicely done, not over-engineered or anything like that. There are some ejector pin marks on the sides, but nothing major, and the wheels seems perfect. The small suspension parts too. Detail is clean, no flash, typical Japanese perfection. Whatever the case is, /back to Fury movie/ if you see the moving tank in the mud, you will note that nothing from the suspension, tracks, wheels, sprockets or sides is visible. All is muddy. And even though the detail is superb /besides the ejection pin marks/ European Theater Sherman should be muddy beyond recognition, so this part is not so important. You can trust me. I lived most of my life in Europe and have been in Germany for many many times. It’s no desert on this continent. And Easy Eights were there, hangin’ around. Making trouble for the Nazis.

The instruction sheets are two in new Tamiya kits: one with building sequence, and one with short history of the tank and some quick reference photos of the real deal. Here, we have no photos though. I assume that because Sherman is a tank pretty well known, there are a lot of those in the museums, tons of walkarounds, pictures and of course – “Fury” like movies. So Tamiya most likely decided that they will cut the costs for adding a luxury sheet of paper with pictures, when you can find some pretty easy. Keeps the model cost low too, so not such a bad decision. 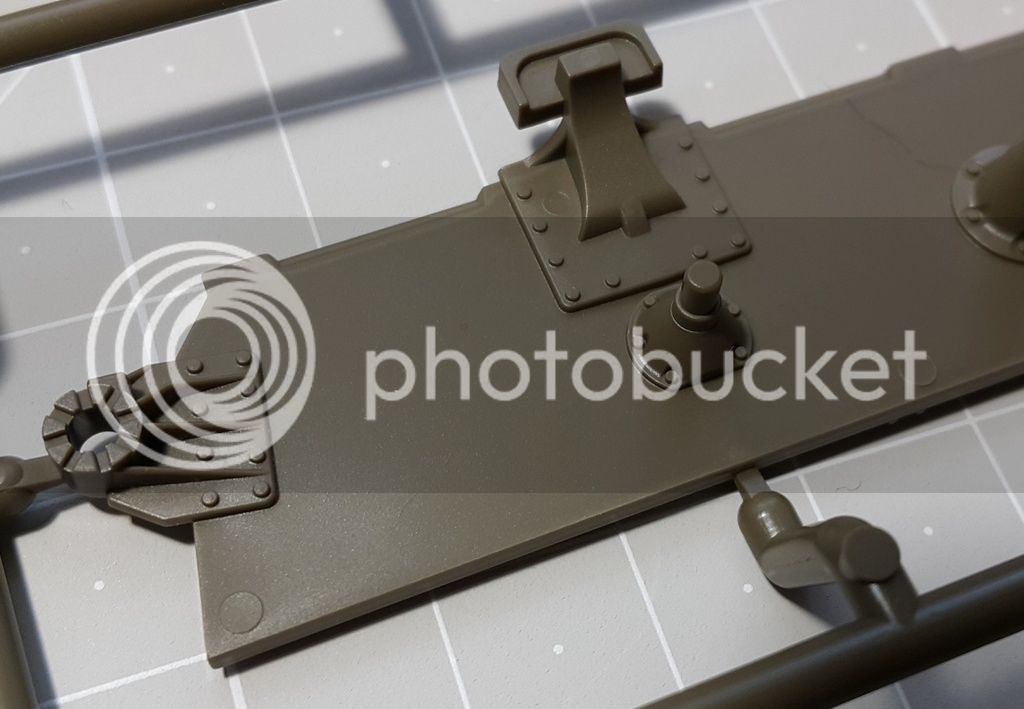 Decal sheet is small and it contains stars. More or less. There are few precisely drawn, white and couple black /or dark gray/ ones, which seems like they were hand painted. Whatever the case with the decals is, I won’t use them in my build, because Tamiya are well known to have problematic decals, usually thick and hard to blend with the model. Instead I am gonna use my own stencils – Allied Set- DN Models which are working perfectly for cases like this one. Of course, the vehicle can be done Russian – Lend-lease one, or captured German /which is my favorite subject line/, but if you want to go the righteous way, you will do it with US markings.

Summarizing everything – we have a great kit, which will come second to none in terms of quality, with minor issues, /and those are issues just for some/ like tracks from vinyl, some ejector pins and not many parts. On the other hand, this kit is perfect OOTB for new comers to the hobby, as well as for modeling masters which superdetail their tanks every single time. As a platform this is the best Sherman I’ve seen so far. If you going to try to go the hard way, there are always Friuls, metal gun barrels, ammo sets, stowage sets /even one for Fury from Verlinden!/ and many more.  If you going to go just for fun, or you want the movie hero tank or world of tanks item, straight outof the box this gonna look spot on. So as with every Tamiya model – no short straws to draw here. In my opinion, this is the Easy eight to get.

Here’s where you can buy this kit: Tamiya Easy 8