Twin seater Harrier is something that many modelers dreamed about. Especially in 48th scale. Even more – the old-school British bird. With its tiny wings and huge and ugly front, this intimidating airplane is fascinating. The combination of long sting-like tail boom and extremely ugly double canopy makes this jet a thing to remember.

Add to that VTOL capabilities and shiny looks and you have yourself a winner. I can only wonder, why Tamiya, Hasegawa or any other major player never came up with that in the past decade or so. But yeah. We have Kinetic for that nowadays. Sorry guys, whatever you missed to produce, now the newcomers steal and bake instead waiting and wondering is this going to sell well. 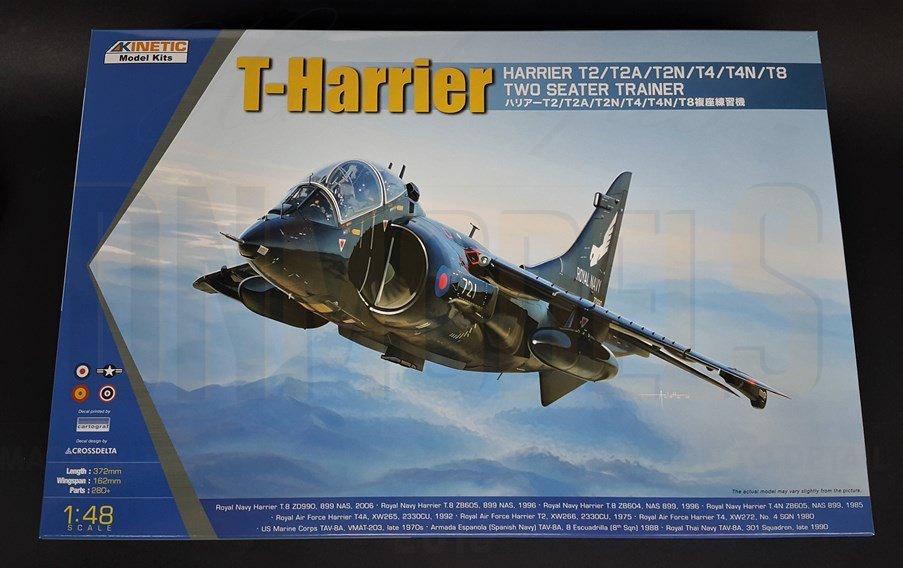 Modelers begged for the Harrier. In all scales and variants. From Kestrel to whatever US variation you might think of – everything is popular. There are SIG’s, clubs, even communities dedicated to that engineering miracle of aviation. Even though not my favorite bird, Harrier always got my respect and I am more than happy to have the chance to review this kit for you. So let us begin.

Clean and nice looking box makes this Kinetic kit very tempting for the collectors. Standard blue for the Chinese company is the general layout. A T-Harrier is represented in flight, in a high-altitude exercise, wearing the glossy black paint scheme. 721 from Royal Navy. Intake is clearly visible and the fan of the jet is represented in motion, quite noticeable, probably due to the dynamics that author captured in the drawing.

The top of the box features description of the options included /which we will discuss a bit further/ and the Cartograf logo that guarantees the decal quality. It is also stated that 280+ parts are inside and the built bird should measure 372mm in length with 162mm of wingspan.

On one of the sides there are ten profiles of the different T-Harriers included, as well as description of the plane itself /very basic/, plus general description of each version included from T2 to T8. Overall – very neat boxing. 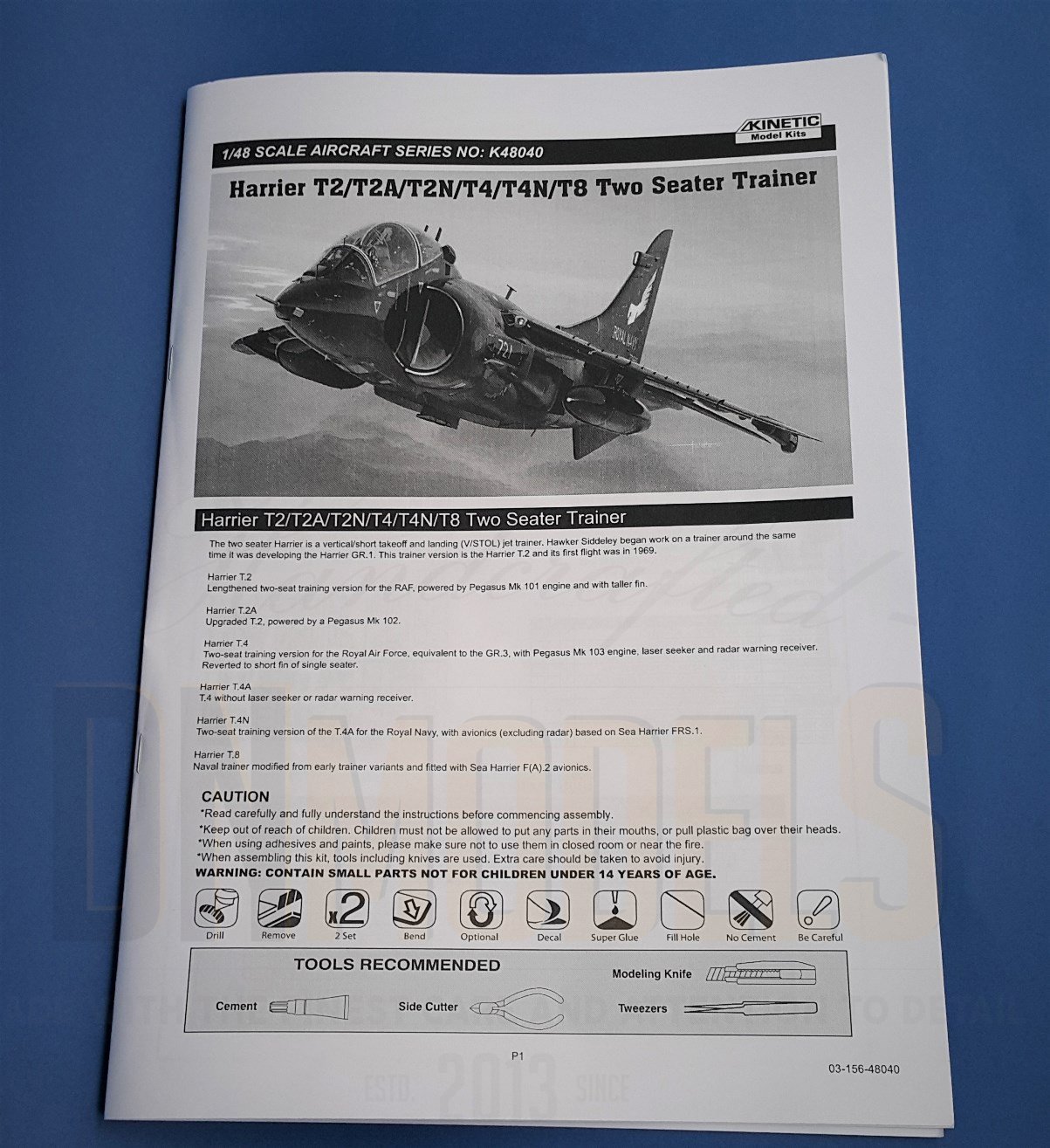 Kinetic’s instruction sheets were never good. They are black and white sheets, made from what I believe was A3 format black and white print, folded in the middle. Might be slightly off that size, but more or less – B&W is what you get.

Information is presented in a simplistic way, with some sparse guidelines about colors here and there, but again far from enough. You cannot compare that to any serious company and that is a major letdown with all the Kinetic kits I own or have reviewed. 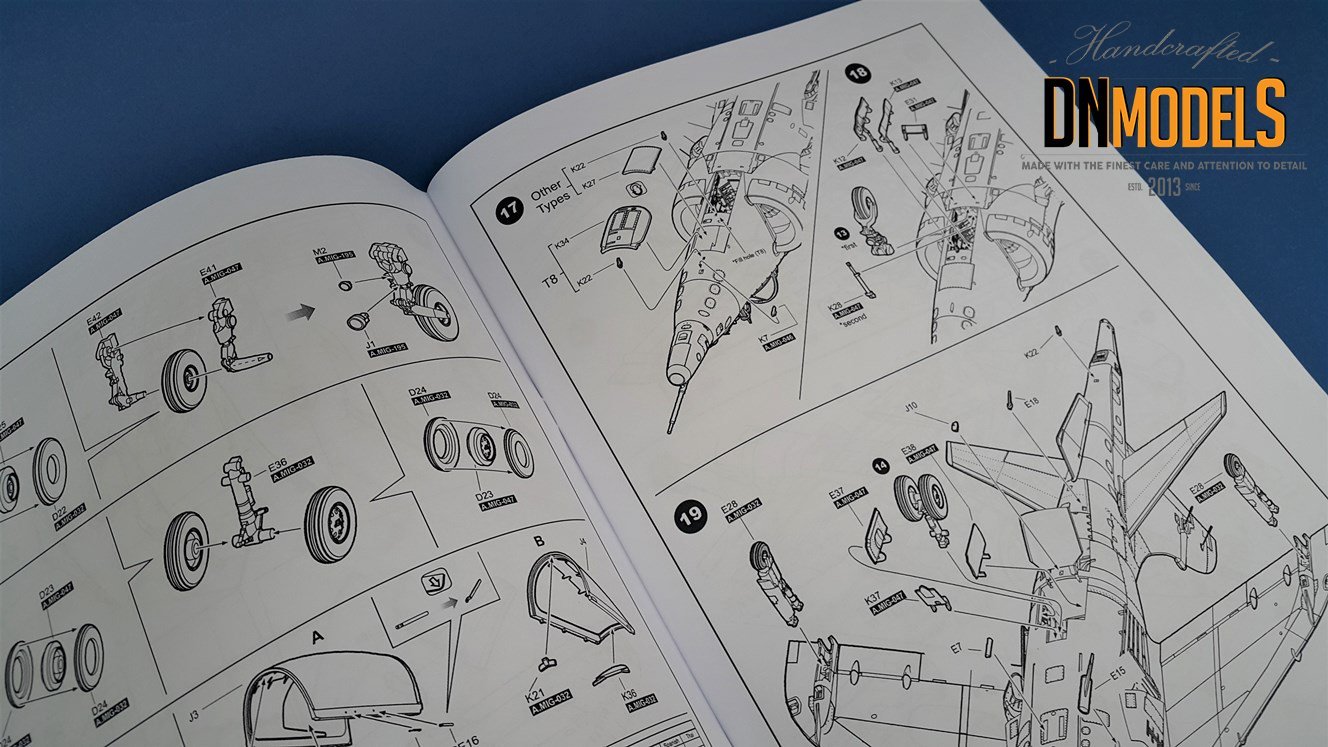 Biggest flaw of all are the color schemes. They are too, black and white. Only. And printed in the most unprofessional way possible. It is horrible. What I believe Kinetic should’ve done is provide a link for download a high-quality hi-res instruction sheet on your PC/MAC/Tablet and spare you the hassle. That would’ve made the model greener, instructions acceptable, and would’ve provided more than decent quality of the whole package overall.

Long story short – without supplemental information, painting the T-Harrier /and probably most of Kinetic’s kits/ would be with arguable accuracy and no self-respecting modeler should rely on what is in that info-leaflet. It is a joke. 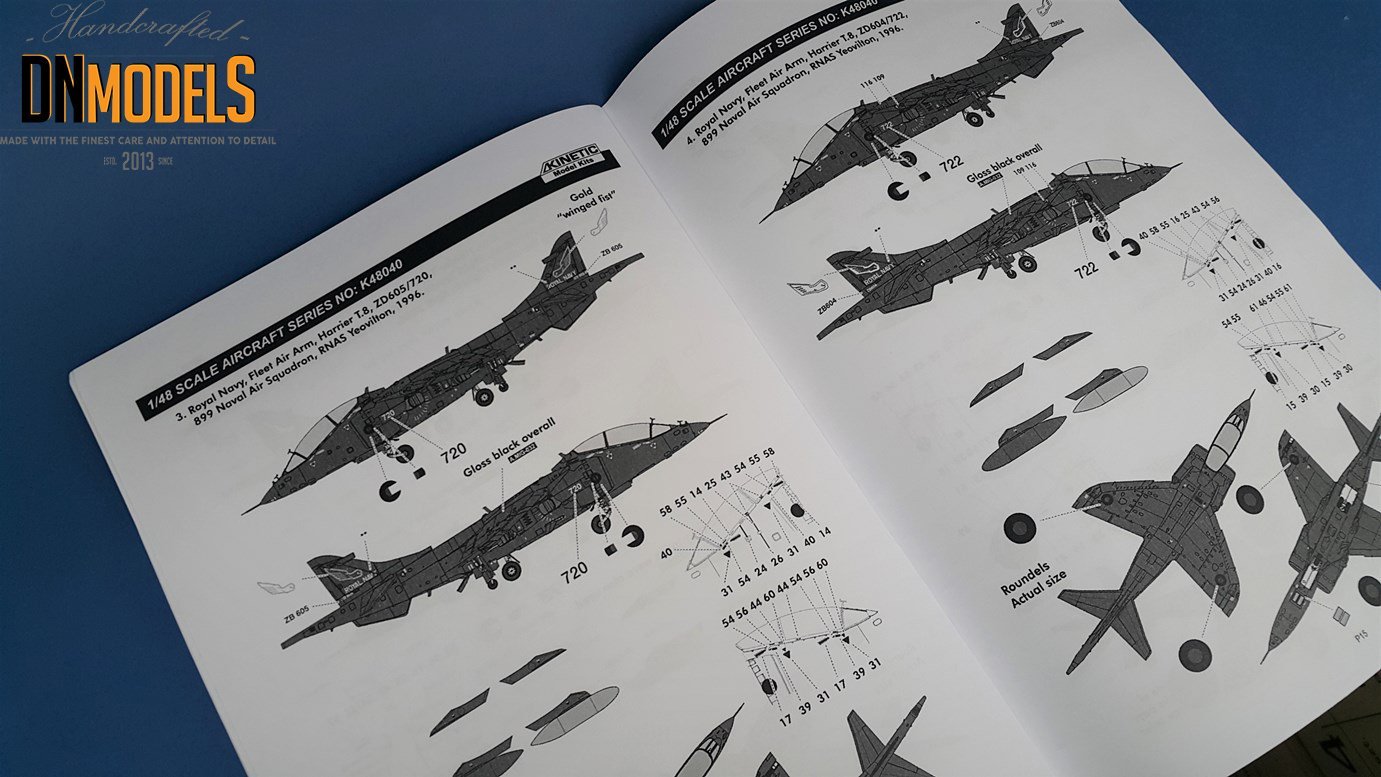 With nearly 300 parts, the kit is abundant in detail. For 48th scale aircraft that is more than enough, although I know tank modelers will smirk reading that. Sprues are packed into plastic bags, standard for Kinetic models, with a lot of space left inside, which is a bit of a waste of material IMHO. The box is crowded, but is not done in the style of – once open, forever open. You can put everything back in easily.

Plastic is light gray, again standard for all the kits from Kinetic line that I have. It is good material overall, allowing for easy sanding, modification and whatever you can think of. Generally positive comments come from all around the World regarding Kinetic’s plastic and I believe that is one of their strong sides. 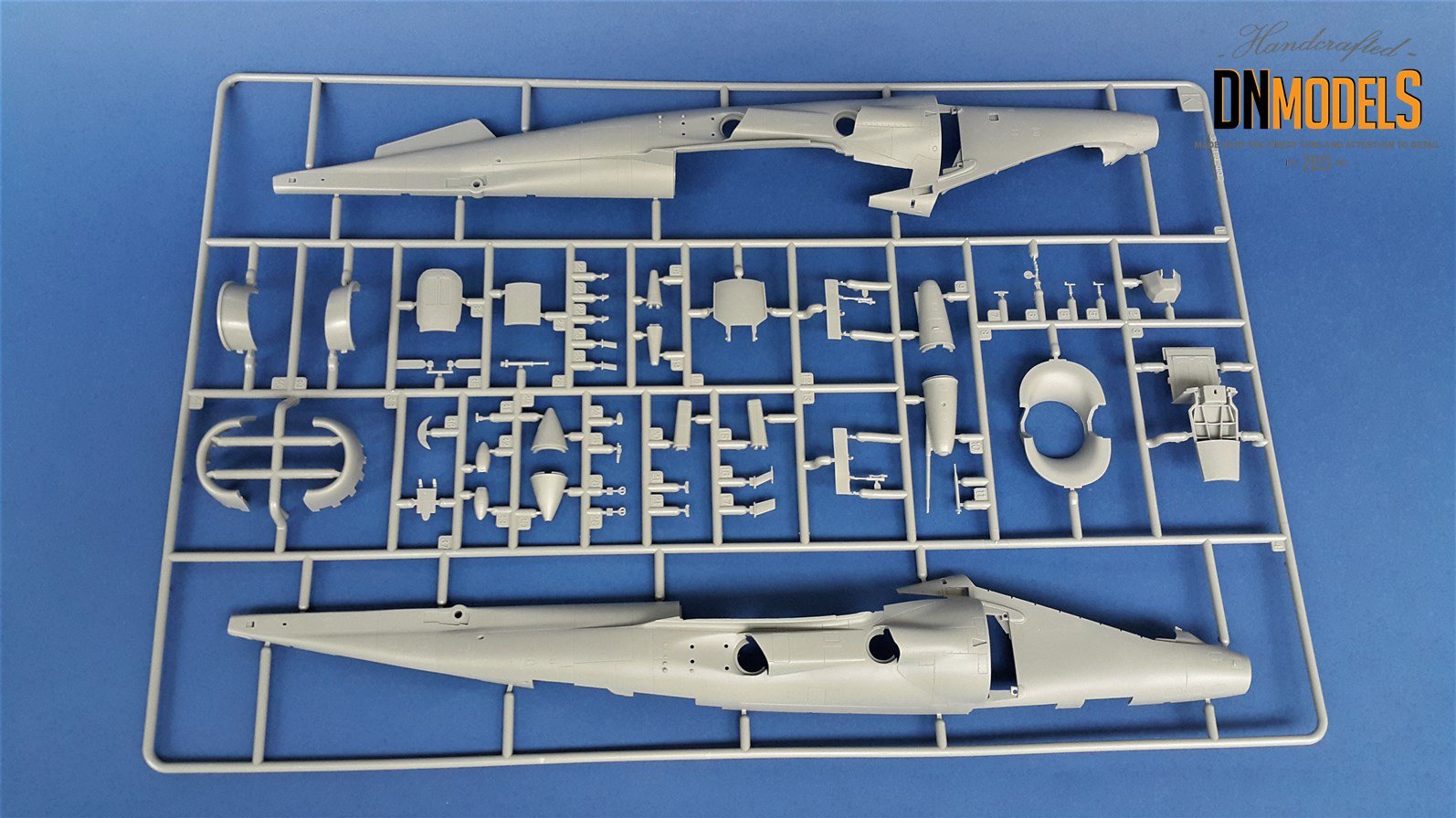 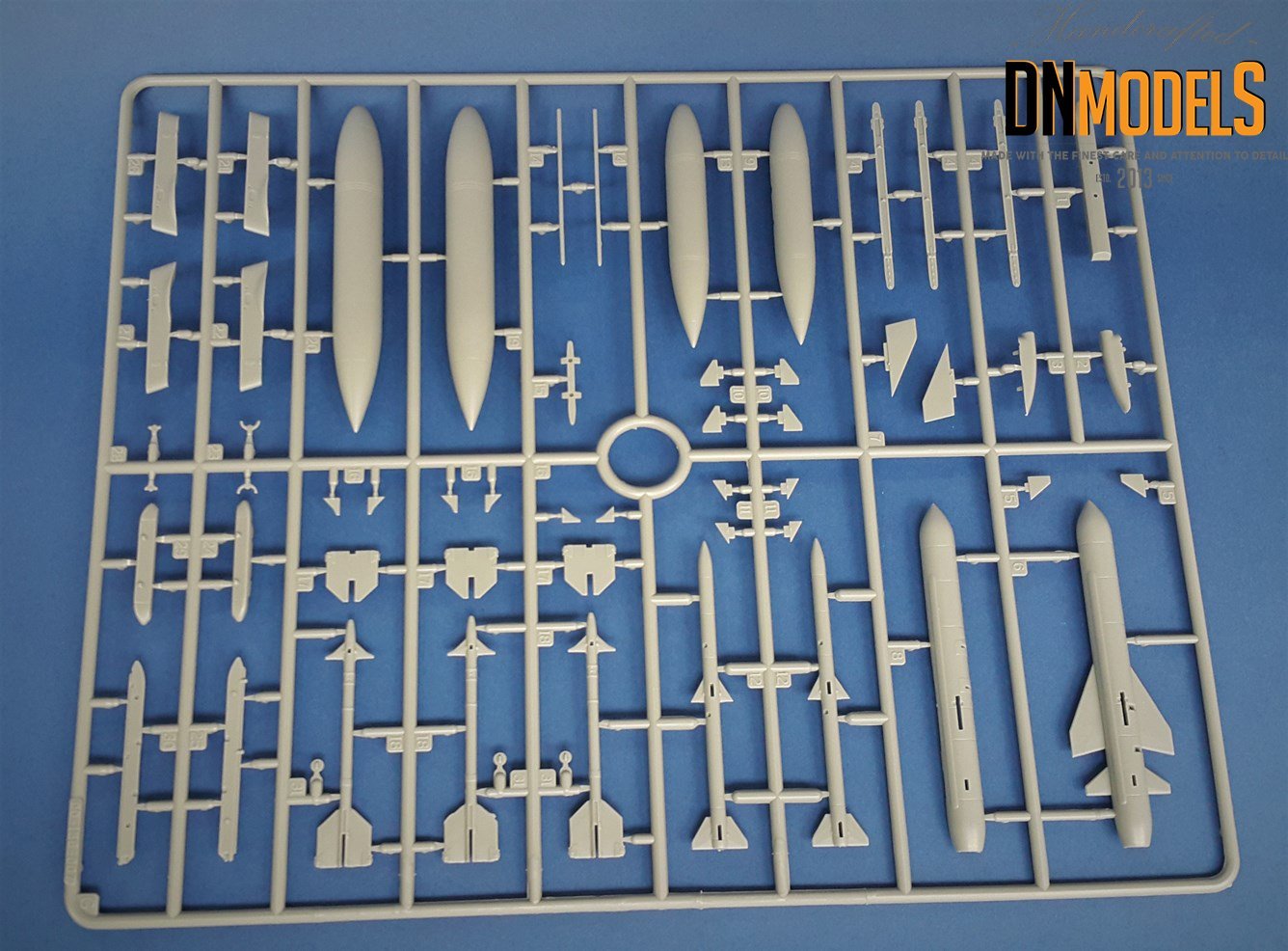 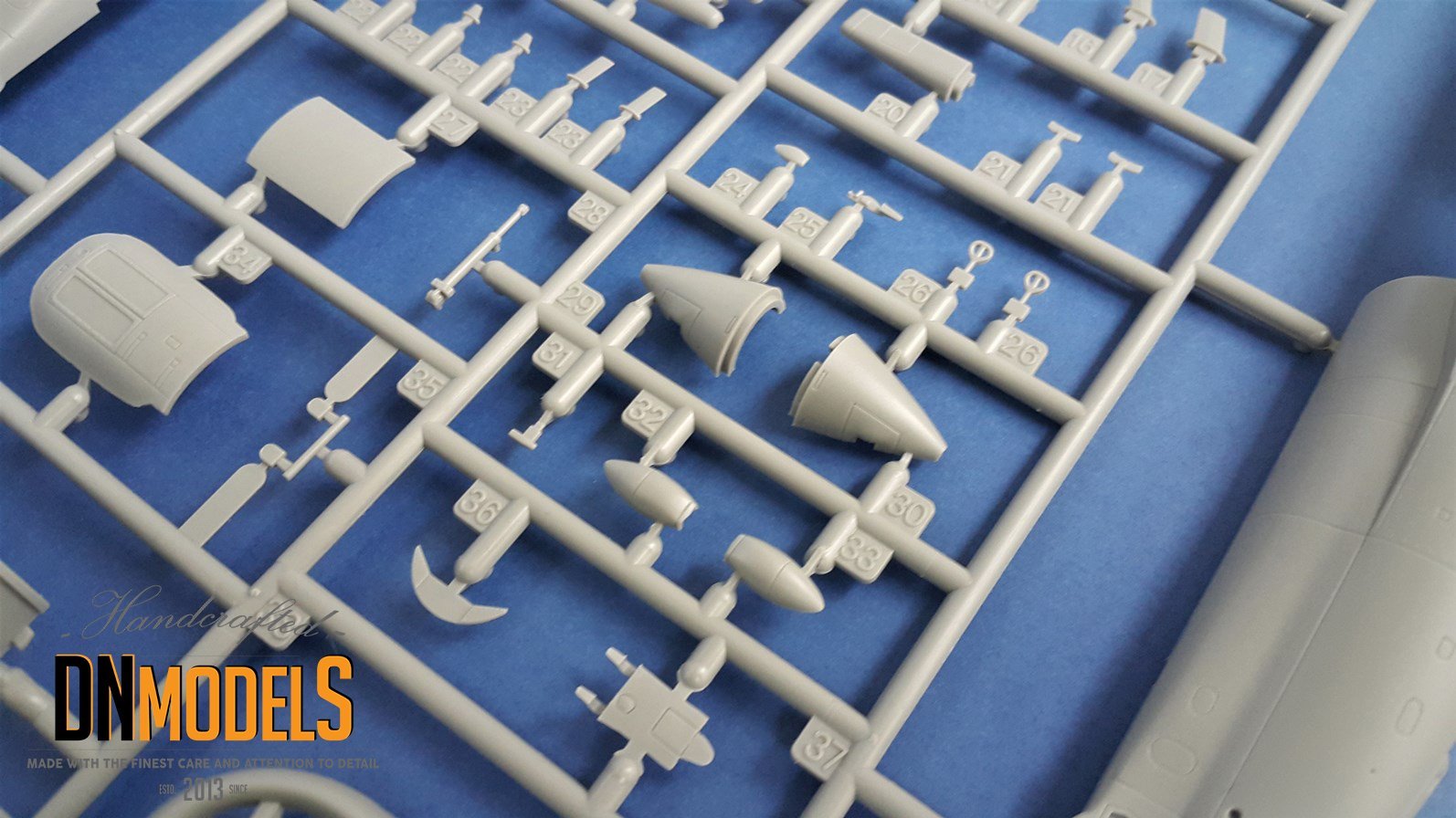 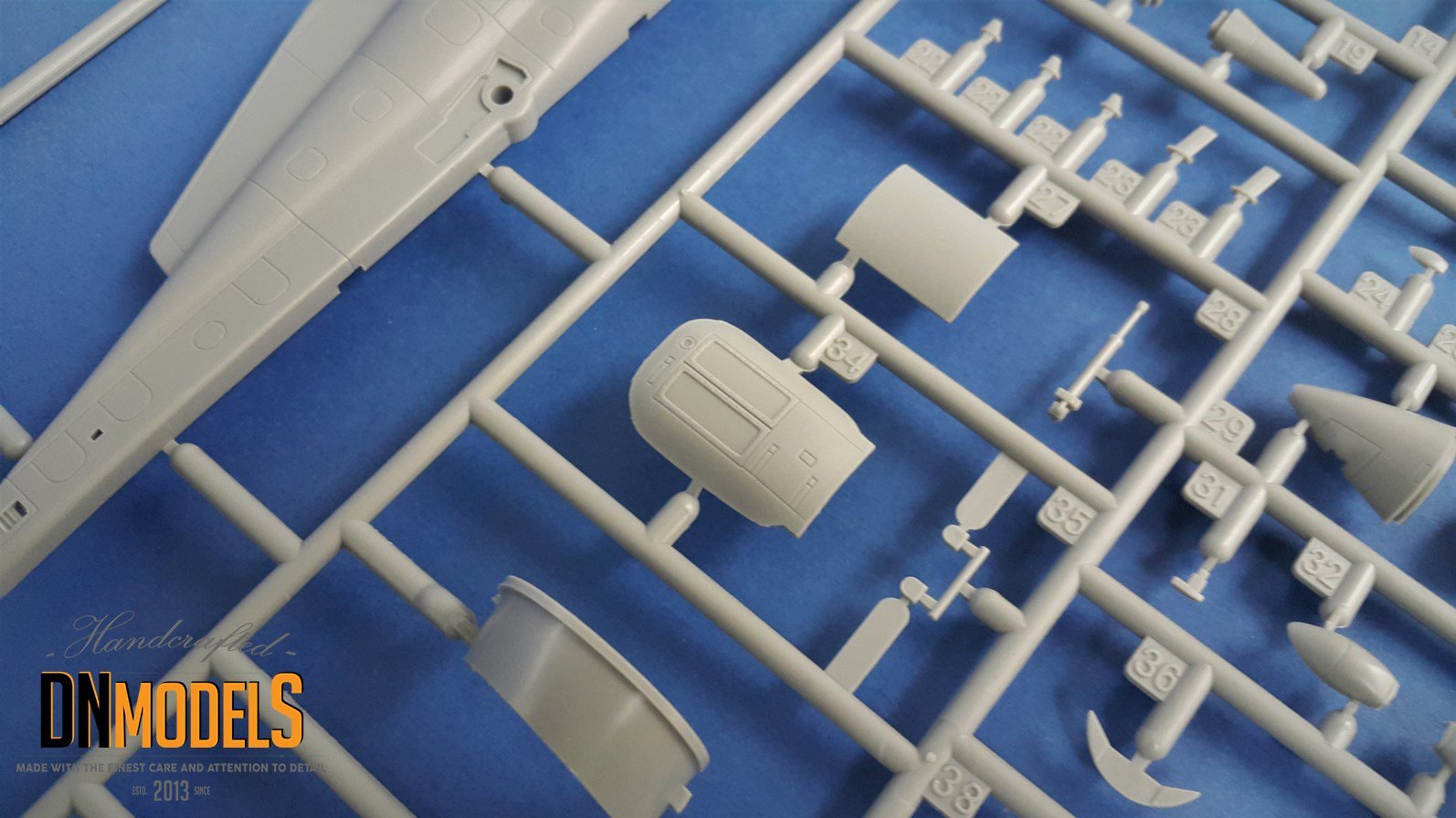 Detail is decent. It is far from perfect, but is not bad at all. The rivets and the panel lines are acceptable in depth and everything follows a logic. Texture might eventually create some fuss and comments, but nothing that you won’t heal with a good primer.

What I didn’t like is the fact that the harrier has a lot more rivets to offer than there are on the kit. Those that are there a good and it is too bad that Kinetic didn’t added the rest. It is OK, but it could’ve been better.

Antennas and small details are thin and delicate, cockpit details are good, seats are very decent too. Wheels could’ve been better, but there should be some space for the aftermarket companies after all. There are two sprues with weapons and fuel tanks, but as a trainer, the T flew mostly with tanks only, so this should be welcomed as a source of spares, rather than something that you should use up on the model. 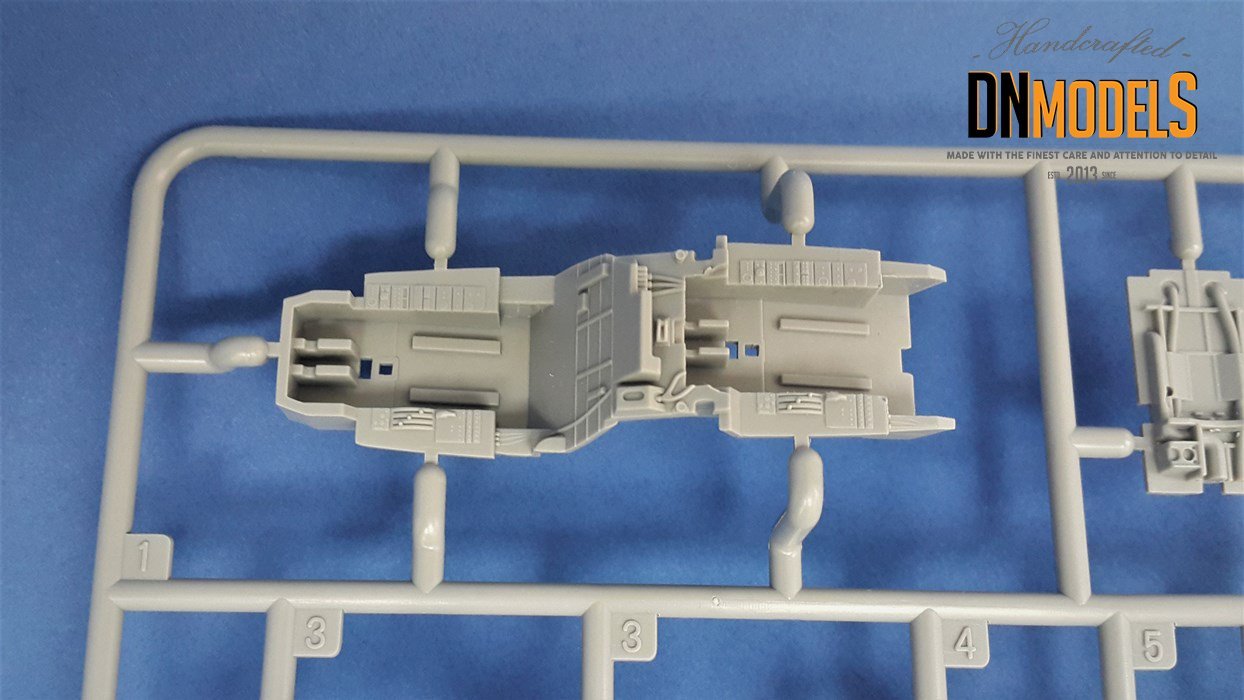 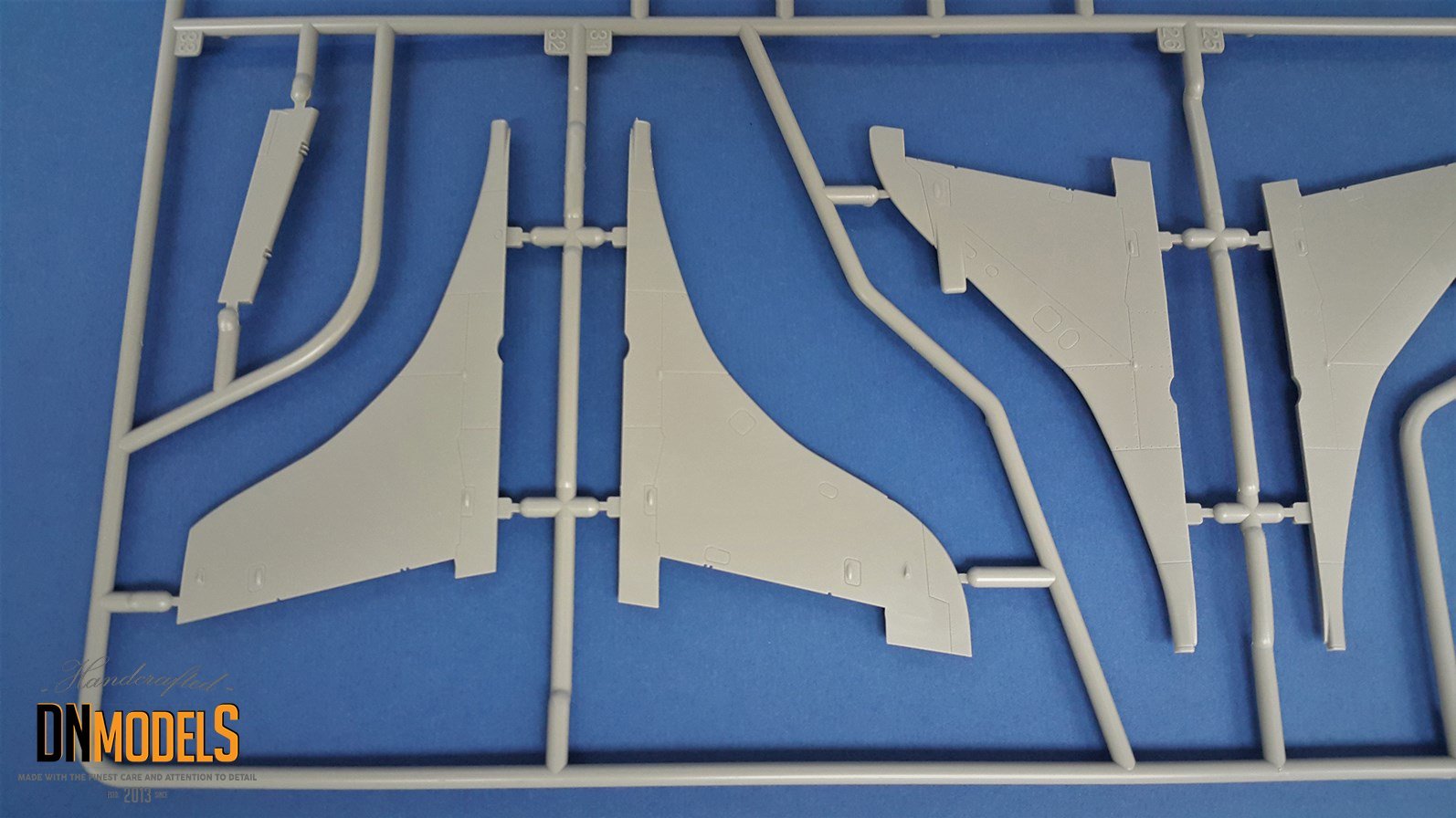 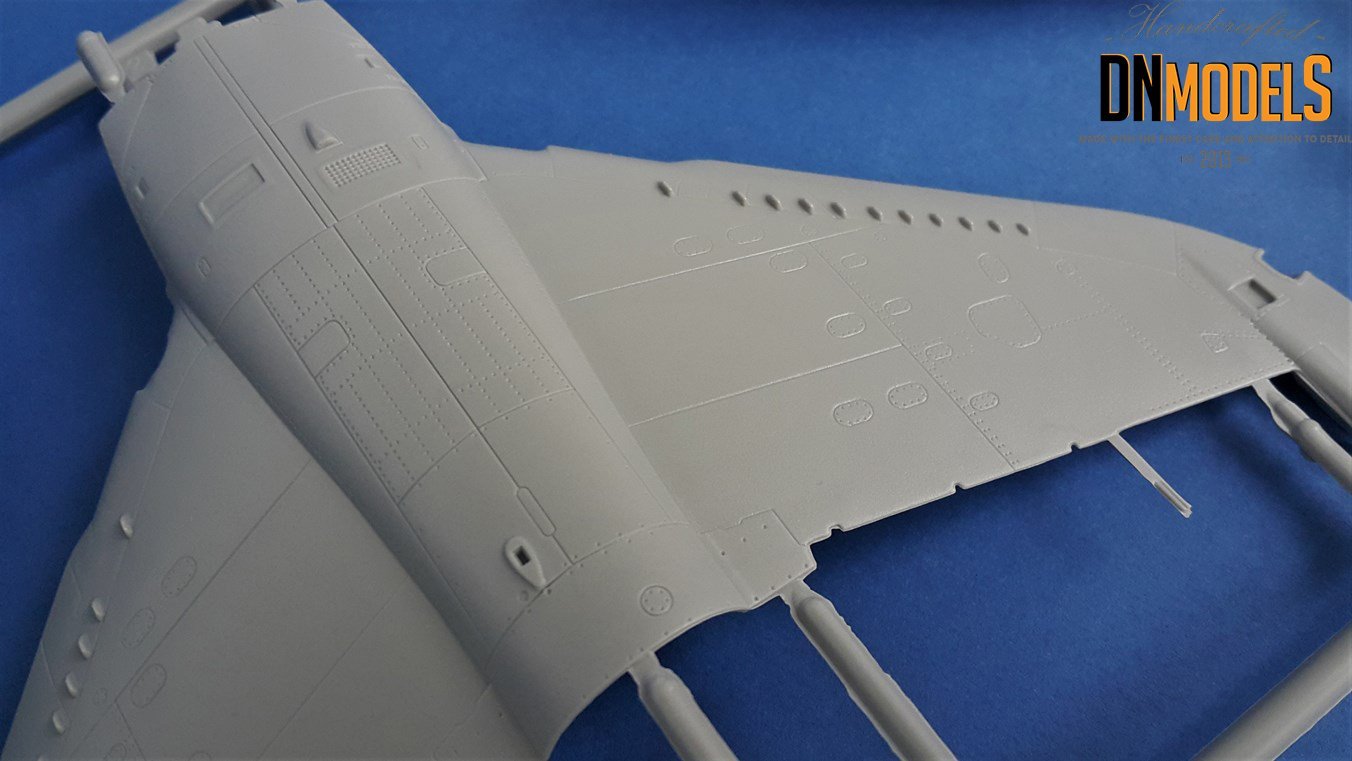 In general, 21st century tooling, with good amount of detailing and nice representation of everything + decent engineering. It is better than old Tamiya harrier, which was already discussed with the appearance of FA.2 and FRS.1 from Kinetic, but it is far from the quality of Zoukei-Mura Phantom. Even from Academy’s Phantom. And the fit is yet to be tested. 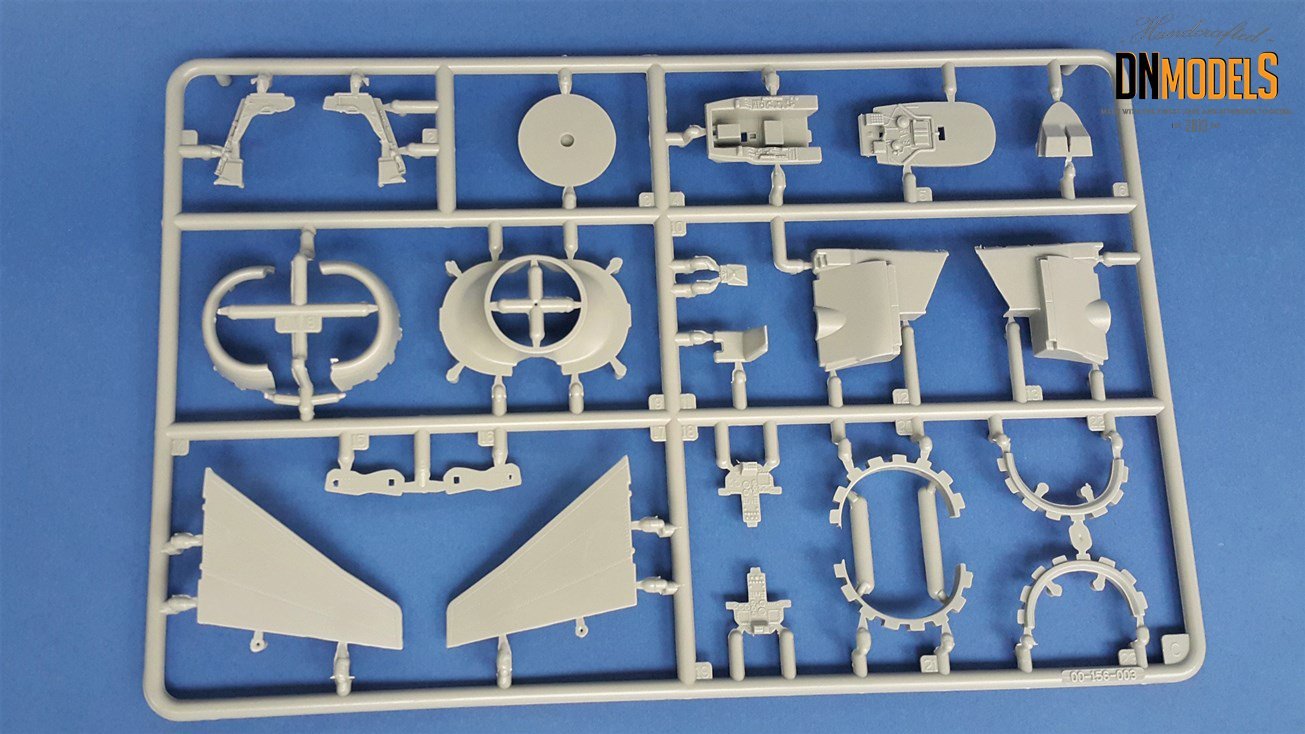 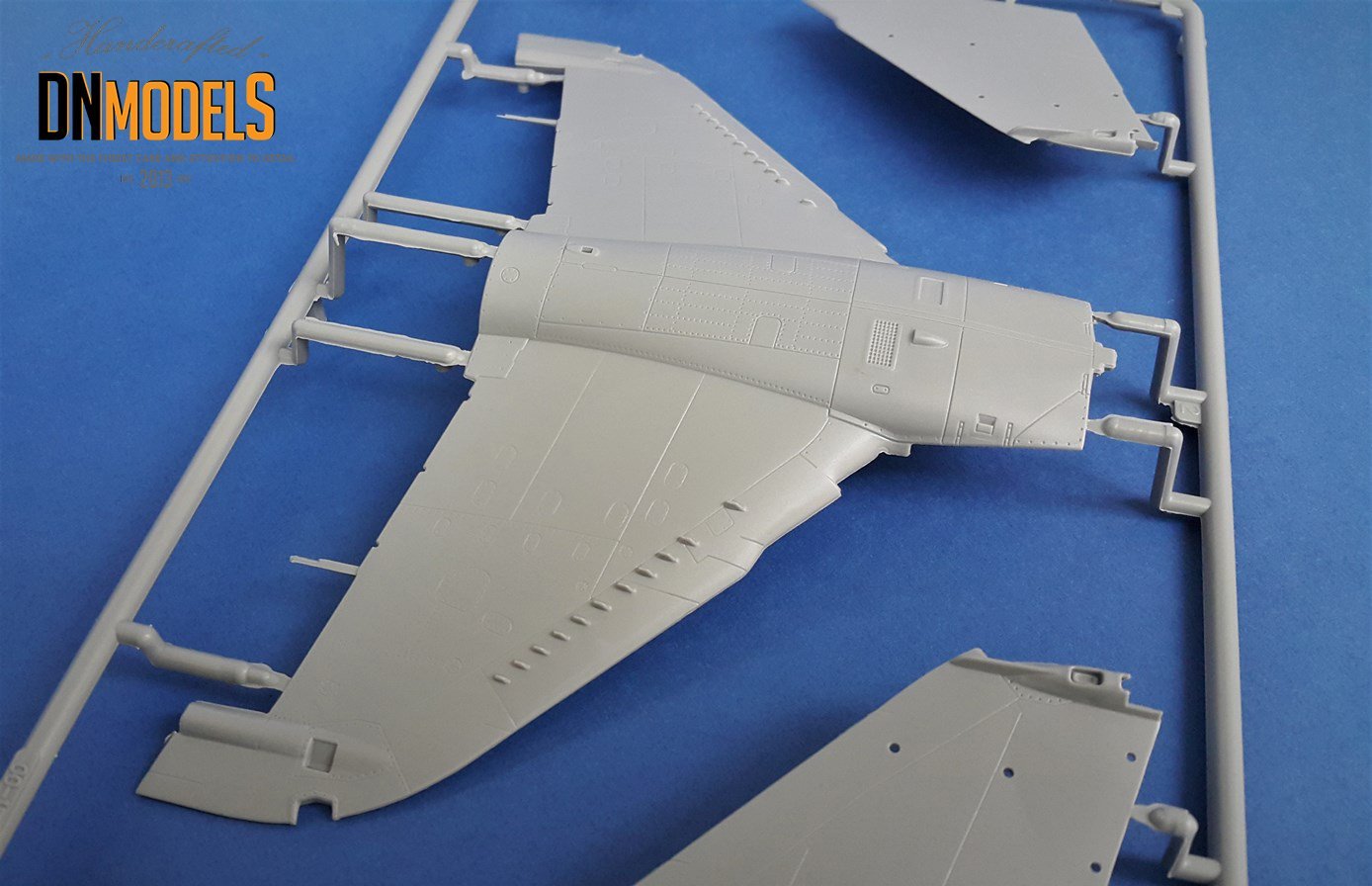 Clears are represented on two sprues. One is for the small parts like HUDs and smaller clears, while the other is canopy elements. Latter one is most interesting due to the number of separate canopy parts. There is no option for single piece canopy, but one can live with that.

In general, there are errors in the engraving. They are not something general, but will irritate a true Harrier experts. The plastic is not very clear and tends to bend the image, which speaks for rather low quality. It is not like Revell, but it is far from Zoukei-Mura too. 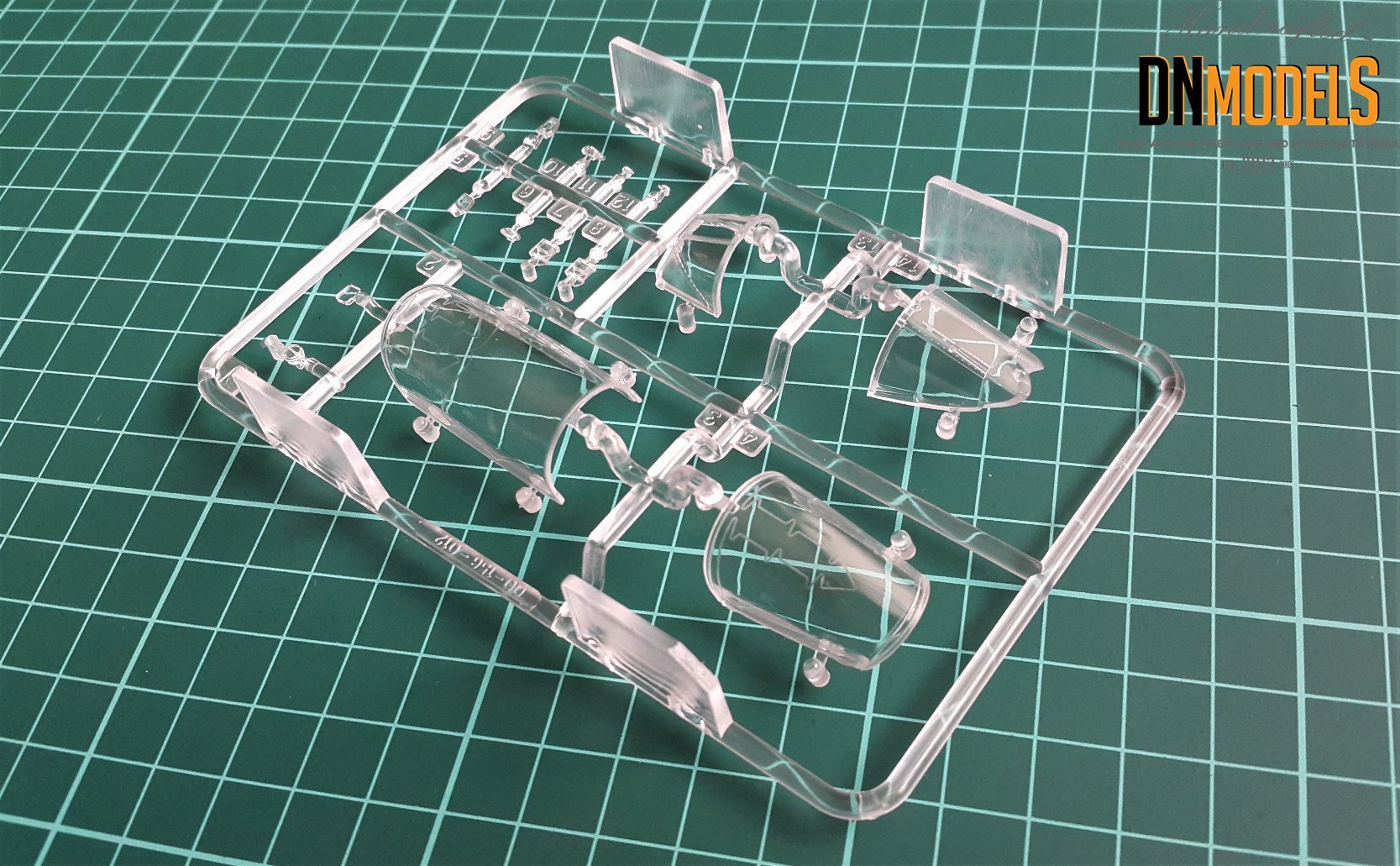 The moldings allow for clear cuts, however T-harrier has internal sealing that is quite visible /even on the boxart/ which is not moulded into the inner sides. Thus proper masking is needed and a lot of patience too.

The explosive cord is replicated nicely, it has white-ish appearance and in my opinion it is good enough as it comes. The front windshield wiper is placed a bit to the side, while it should sit either over the frame or right next to it. The space in between will prevent from either – proper masking or proper painting. Probably a lot of brush painting will be involved. Too bad that this is at the front of the T-Harrier.

Small Photo-etch sheet is included, rather for buyer’s attraction, than a photo-etch fans satisfaction. It is thin and with good overall quality, but we are yet to see what aftermarket companies has to say and their final word will count in this case. I believe Eduard are going to provide us with a decent set in the very near future. Maybe others too.

Decal sheet on the other hands is one of the highest points in this set. It is about size of an A4 sheet and includes a lot of interesting stuff. The decals are produced by Cartograf /the best possible choice/ and the design is made by Crossdelta. Serious players in the business. Wise decision from Kinetic’s team. 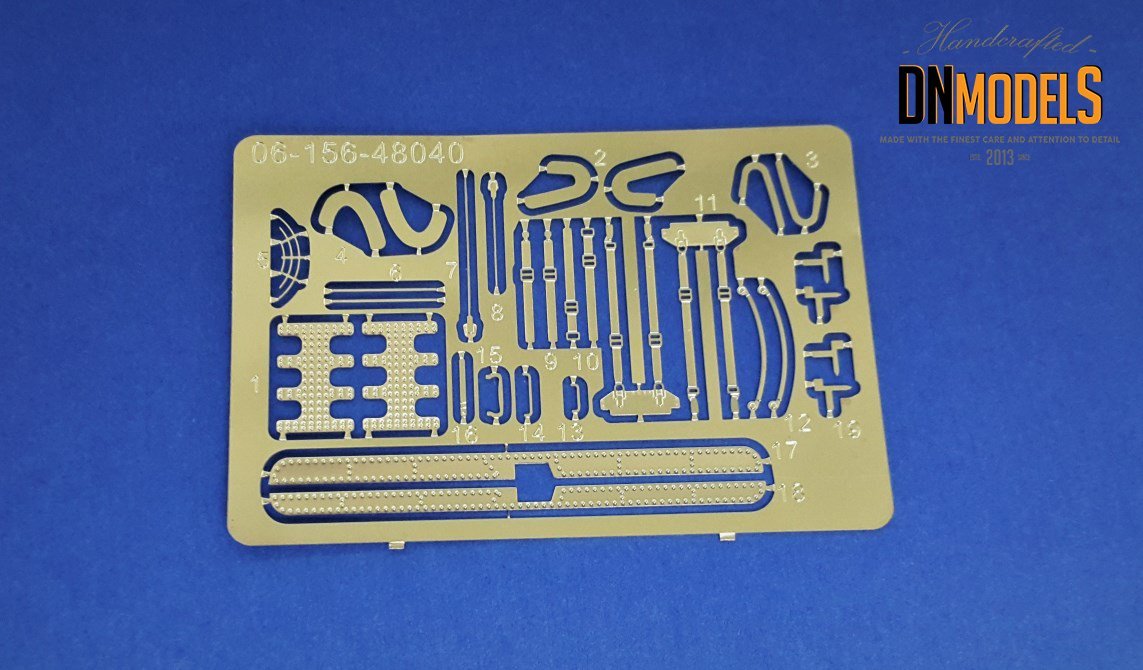 Half of the sheet is taken from small and various technical stencils as well as specific aircraft numbers. Stencils feature red, white and yellow in them and look very realistic and with spot-on colors. There is no pale or too bright markings, everything seems to be perfect.

The other half is filled with roundels, bigger numbers and specific insignia, most interesting of which is the Thai lettering. That is the first of that kind that I come to see and it looks odd but fascinating. Some of the roundels are cut for the proper openings of the intakes, but instead of using those I would prefer to mask them and use paint. That last one goes mostly for the black options, sine gloss black harrier with decals is very hard to be reproduced. Actually anything black is tough in scale. But as far as the decals go – ten out of ten for this kit. 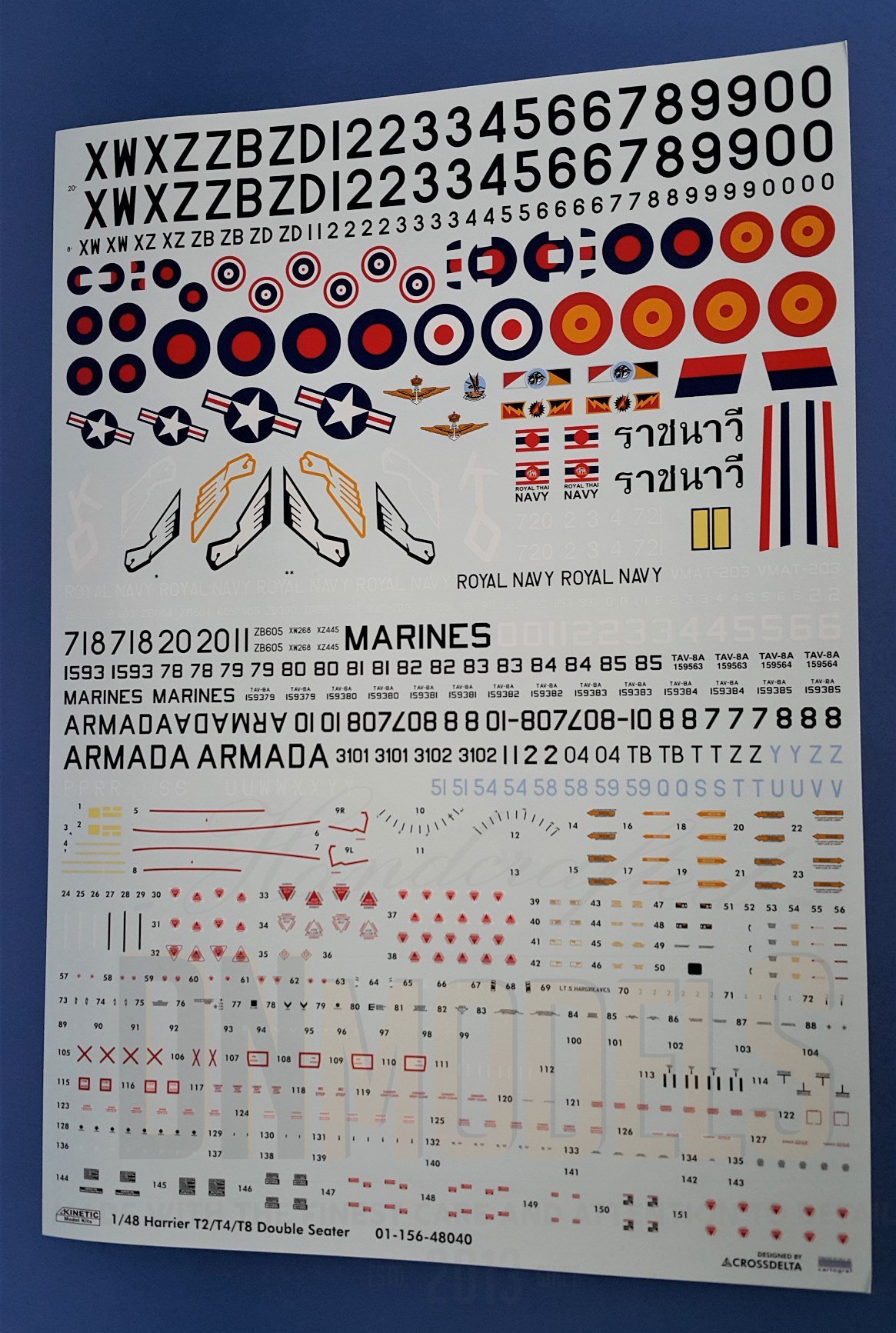 First three are glossy black, than the fourth is Satin Dark Sea grey. All with that specific Royal Navy shiny look. RAF versions are two tone camouflages with Dark Sea Grey and Dark Green and the USMC version is Light Grey/Dark Green camo scheme typical for US Harriers. On those more weathering is present.

Then we have Spanish White-belly/Gull gray-back scheme famous for Harriers from Spain’s Armada and lastly, same camouflage for Thai T-Harrier, which I believe is the least famous of them all. What is common is that they all require additional research for proper replication. What you can get from the sheet is mediocre as information and representation. As far as possible from the eye candies we are used to nowadays, featuring weathering depicted, color shades and everything in that matter. None of that is here.

This was a long awaited kit and even though it is not at the highest-level that we’ve seen – it is very good. As I’ve mentioned above it is far from Zoukei-Mura’s F-4 which is a benchmark for 48th scale jet. It is also at the typical Kinetic level with all the pro’s and the cons of each of their kits. That means – despite the poor instruction sheet – that the kit is a winner. There are mistakes, missing details and what not, but Kinetic are far from being the company that would satisfy the most pretentious modelers. I think that everything will come into place in a short time. With some resin add-ons like wheels, cockpit, engine and such, the kit will shine. Even more if you are into riveting business.

Check out the Mask Set for this kit from DN Models: T-Harrier Canopy, Wheels and Insignia (RAF & Royal Navy) 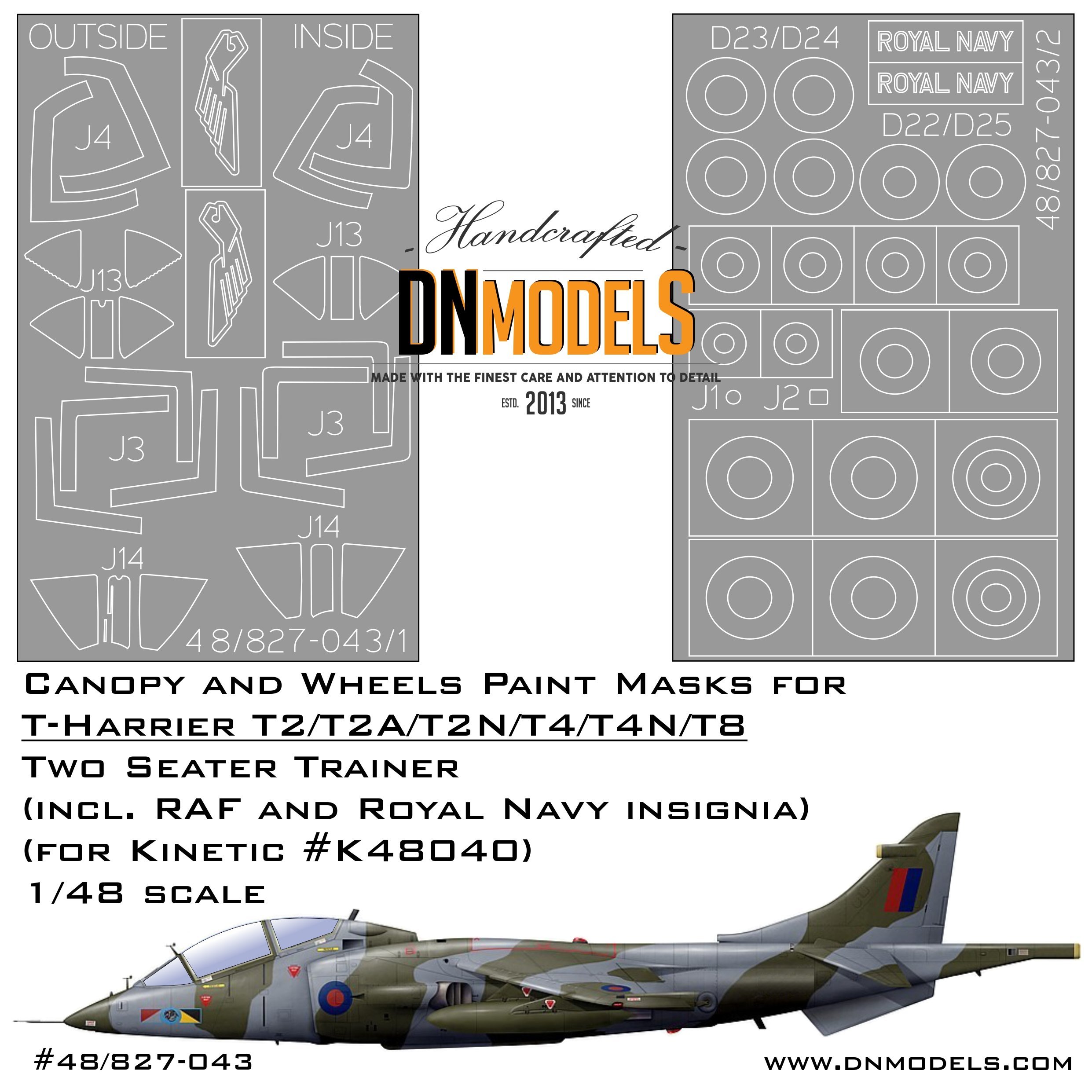