In 1981, T-55 was already an obsolete tank. It was replaced by more modern and advanced vehicles, already in mass production. Nevertheless, T-55 still had some potential, as a platform and as a concept. Some improvements were already implemented during decades of service life and some are about to be introduced.

The kit we’re looking at today is the 1981 version of T-55A. A tank that served in Soviet-Afghan war and a tank, that still serves many as of today. By saying that, I am not exactly sure, was that 1981 mod, or it was a late 70s thing, because once I stumbled upon a picture of similar tank and in the description there was the year 1980. In fact, it is very hard to tell when it comes down to Soviet military.

Anyway, this is one of the latest releases from MiniArt and a continuation of their T-55/55 line.

Of all the boxarts that MiniArt gave us so far, the Tirans and the T-55s were the best. At least in my opinion. And of all T-55s, this is the nicest one. The reason for that is the vividness of it all, which somehow adds to the box appearance. MiniArt’s boxes are with orange on their sides and this T-55A looks fantastic in the camouflage scheme presented.

The camouflage itself is something that I haven’t seen before, but with so many produced, it is always a possibility. Besides, the Soviet green is not the best choice for all the boxarts anyhow. So I would give MiniArt 10 out of 10 for this picture and the choice they made.

The standard booklet for MiniArt is the case here, but instead of writing much about it like I usually do, I will substitute with pictures this time. What you see on those pictures is in general what you will find in the instruction sheet. They are very nicely arranged in understandable and professional manner. That doesn’t ease up much the building process though, because this is one very complex model to complete. 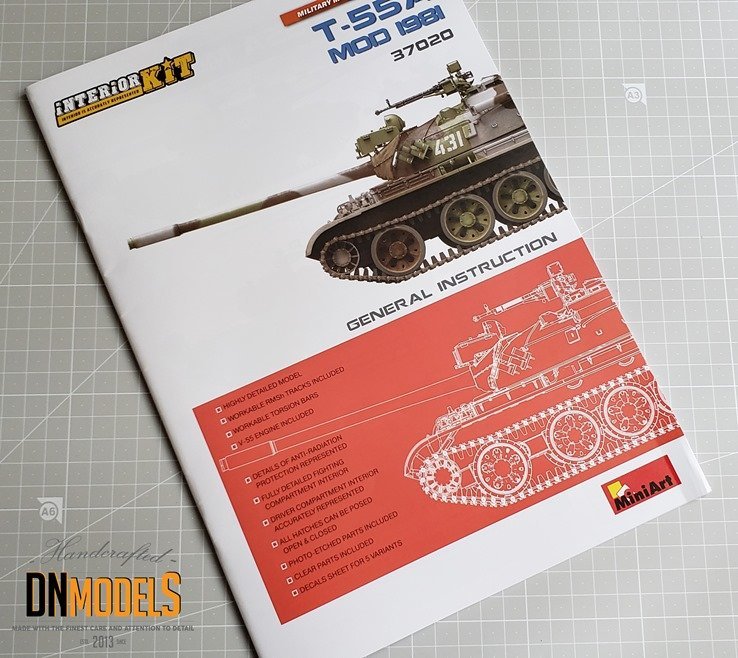 There are a lot of sub-assemblies, mostly concerning the interior of the tank. Not only of course, but that is where the most challenging areas are. The stowage boxes and some of the external elements are too, quite tricky at some places. But in general, experienced modeler will be perfectly capable of completing this tank with time and some patience. For the beginners, this isn’t the best choice. 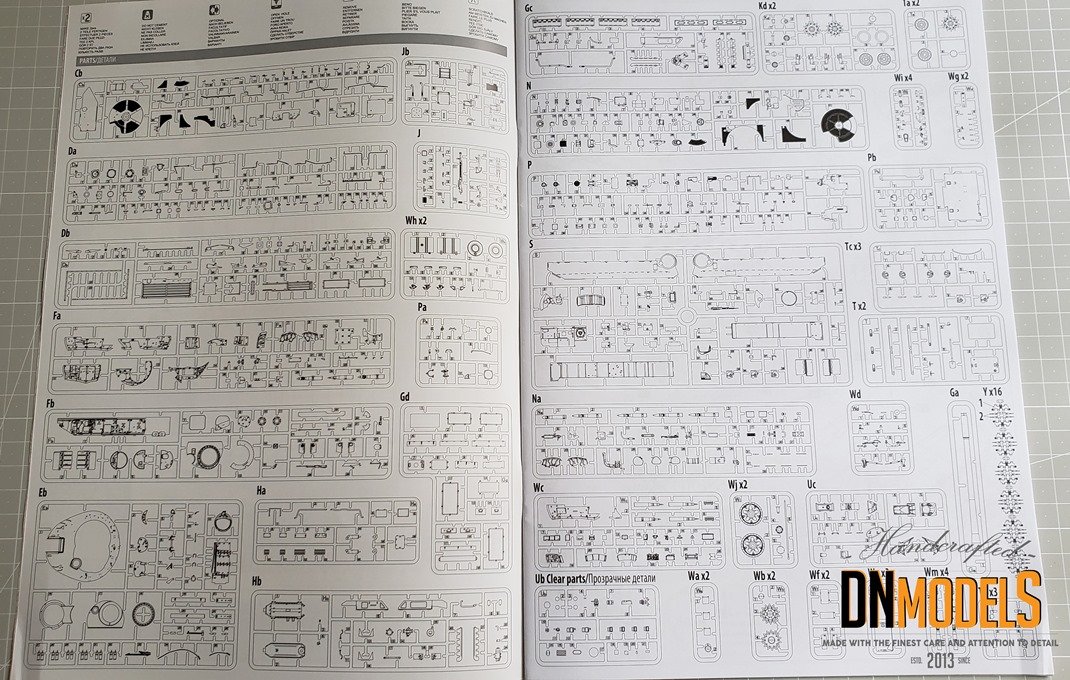 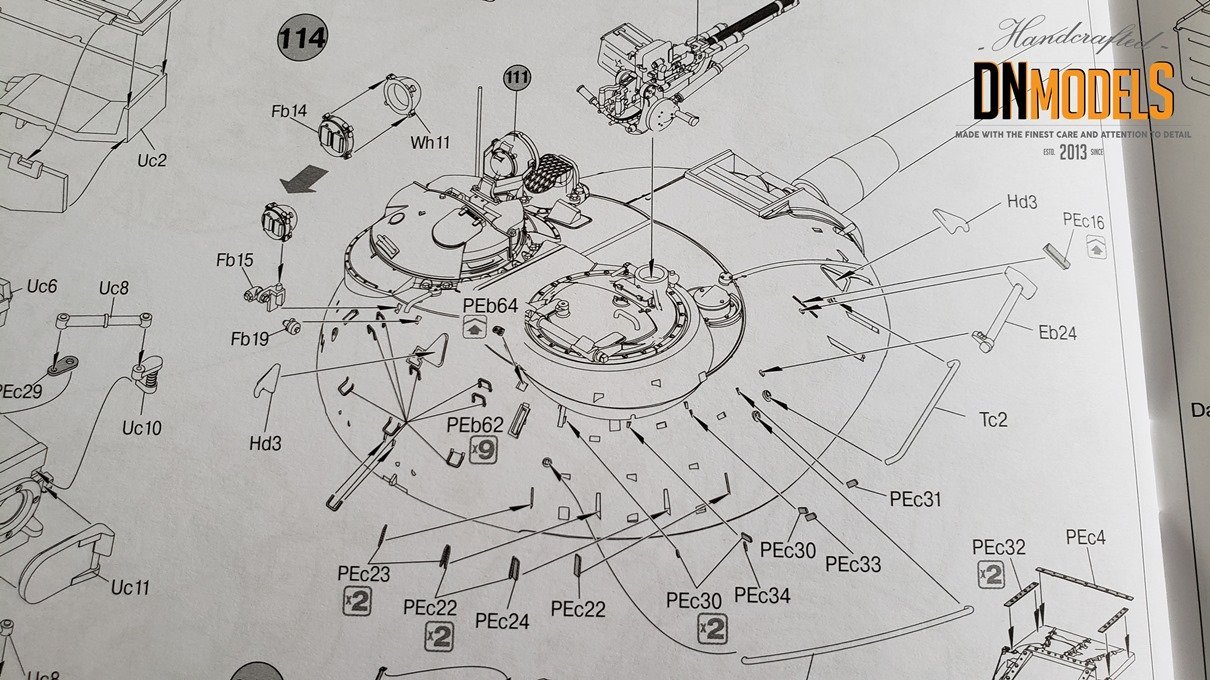 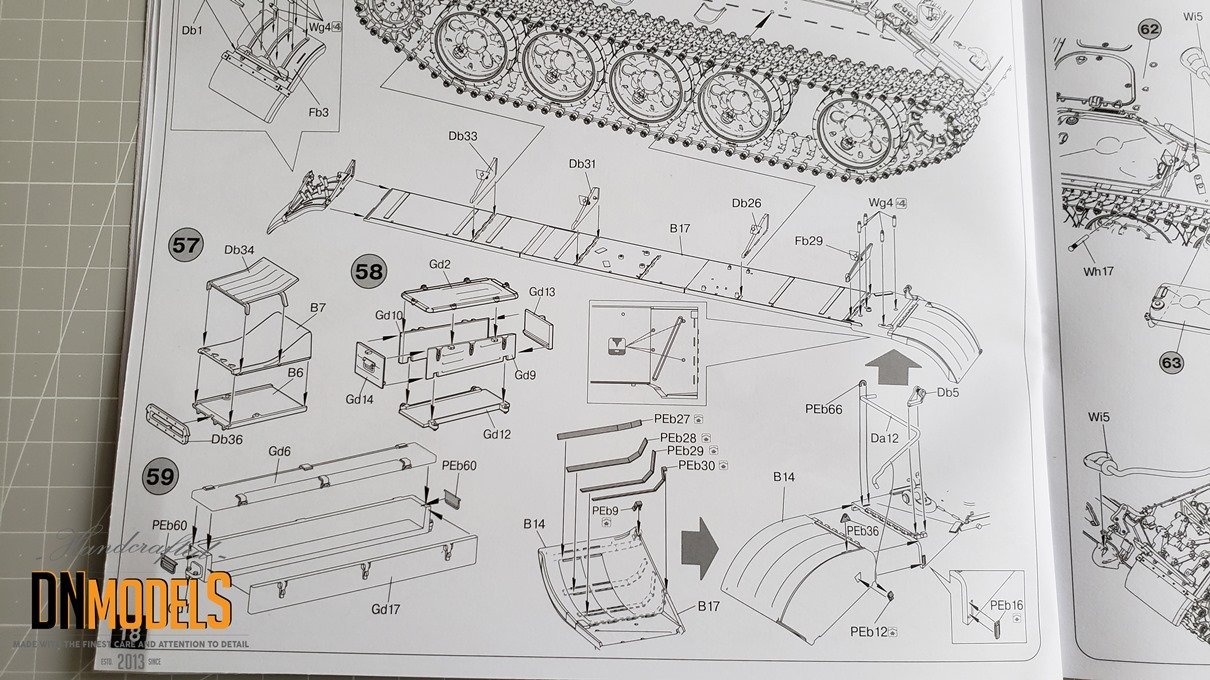 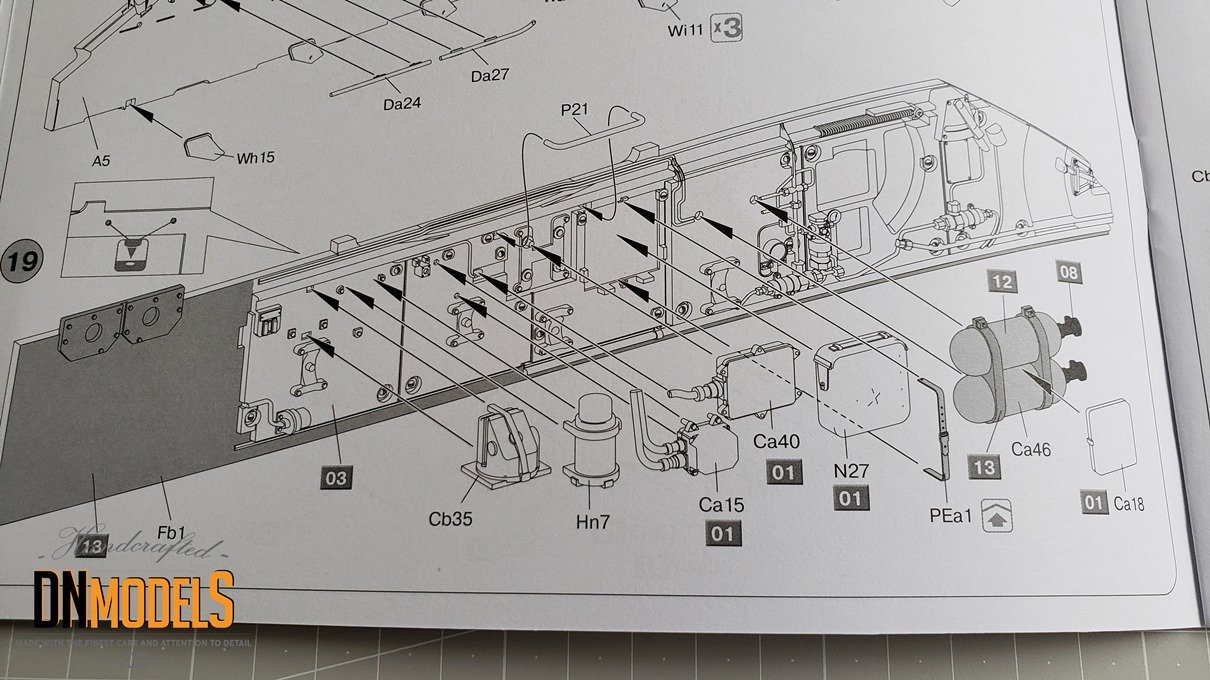 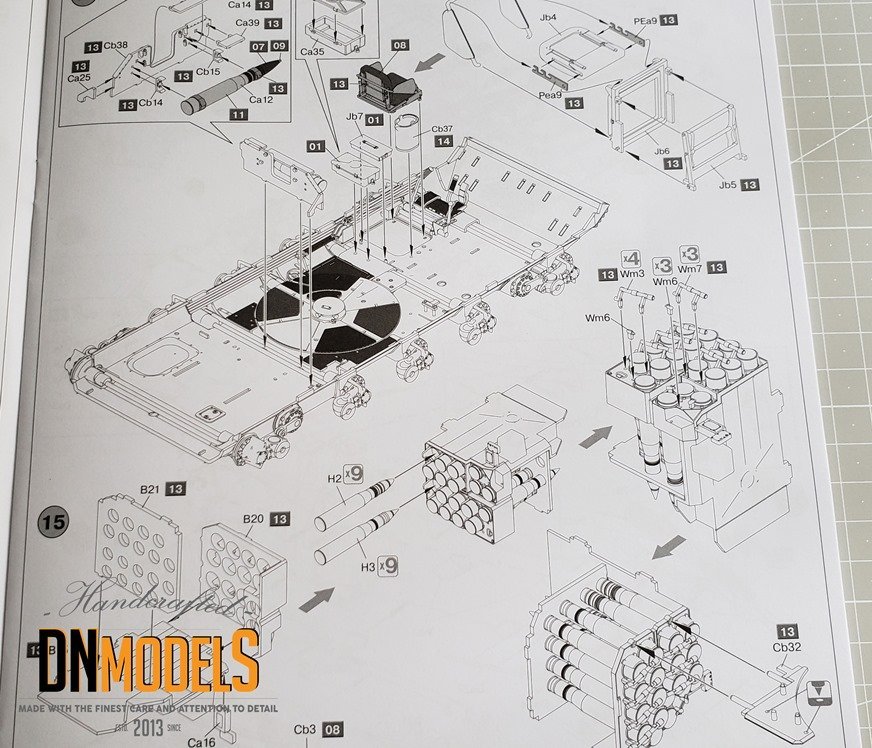 This T-55A mod.1981 features interior, thus the sprues are numerous and filled with many small parts. That it very scary on one hand, but on the other, it shows the quality of the material. This is a plastic that comes from Western Europe, something that MiniArt picked couple of years ago, mostly because of their demanding engineering. Such small parts and tiny elements require flexible and easy-to-work-with plastic.

That goes for all the elements included, but especially for the fuel lines, handles and similar items. The quality of the tracks too. Speaking of the latter, they are the best molded track links that I’ve ever seen. Too bad that most of the tiniest details will remain hidden beneath the dirt and the mud that will be applied on the track length. 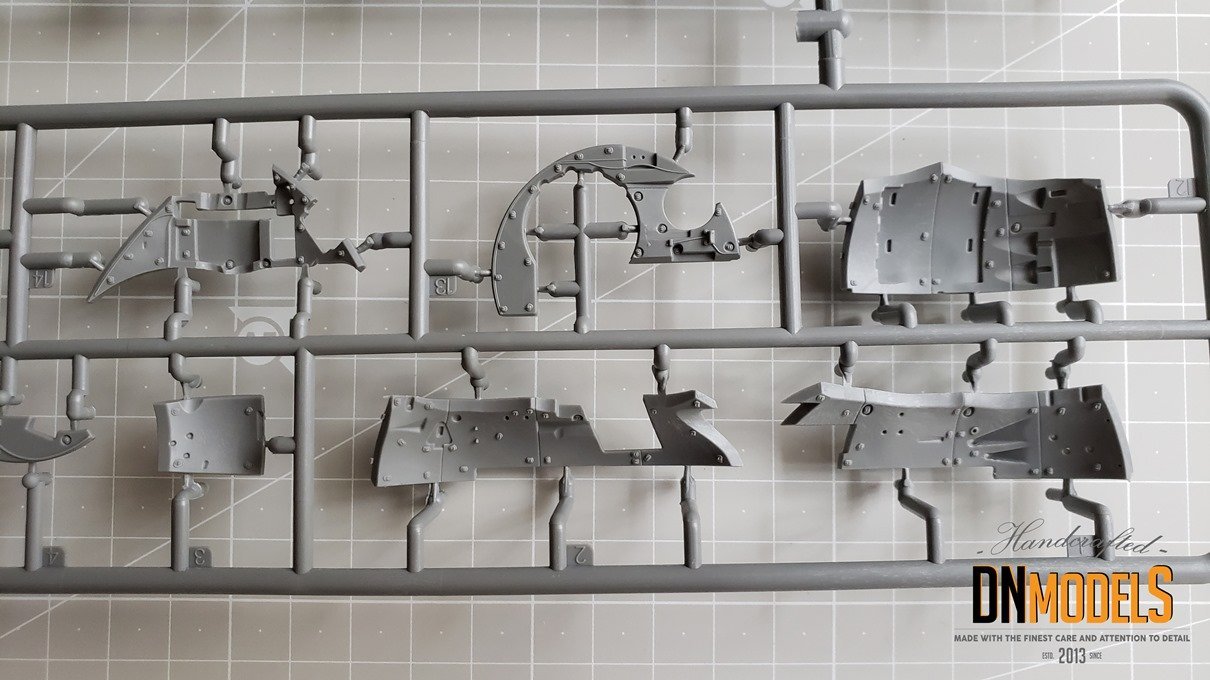 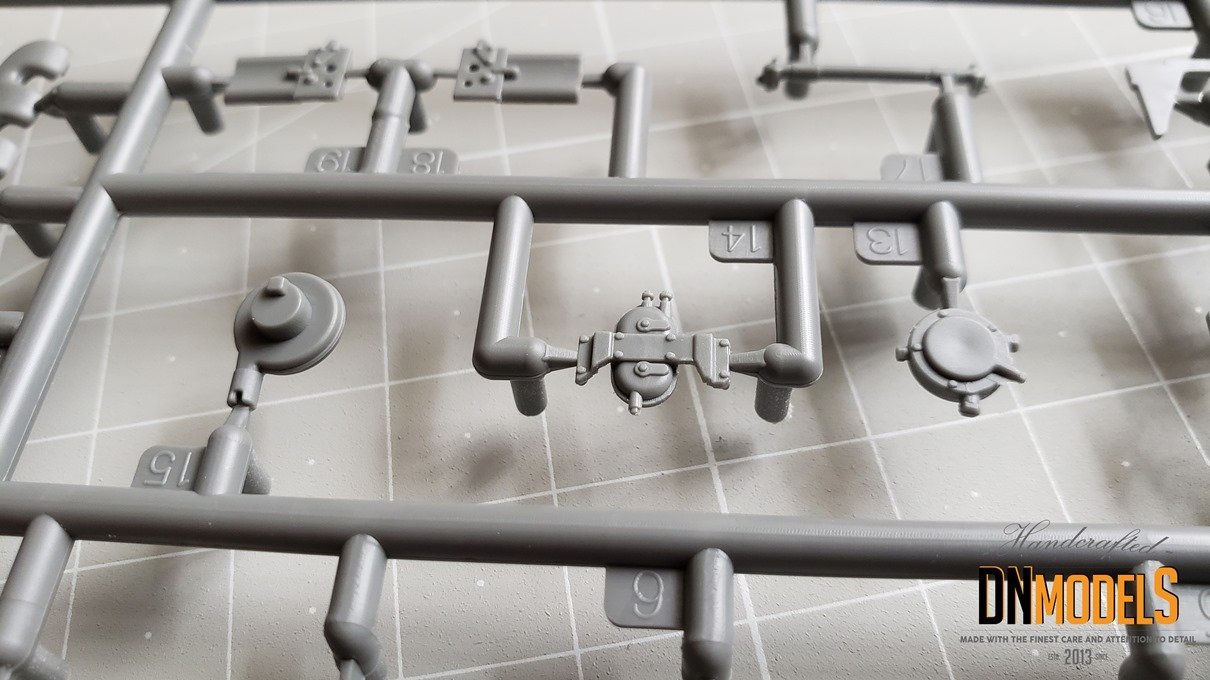 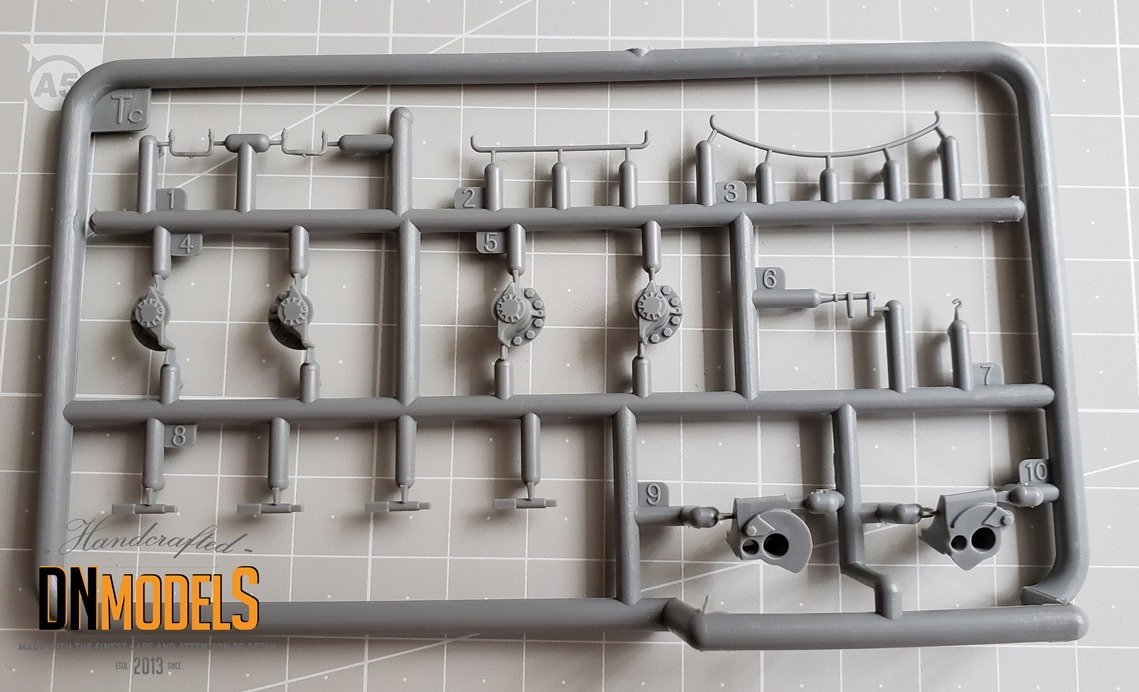 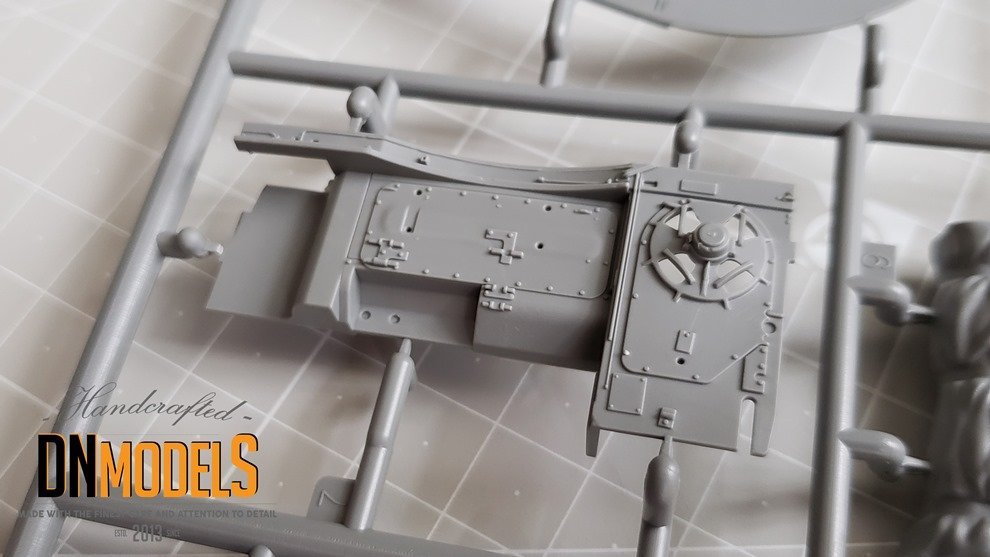 All the edges are sharp and clearly molded, same goes for corrugations and even the imitation of fabric materials. There is some flash here and there, but that was inevitable considering the amount of details included. It is nothing that you cannot cope with and if you think you will have troubles with the flash, think of the rest, this kit might be the wrong choice for you. 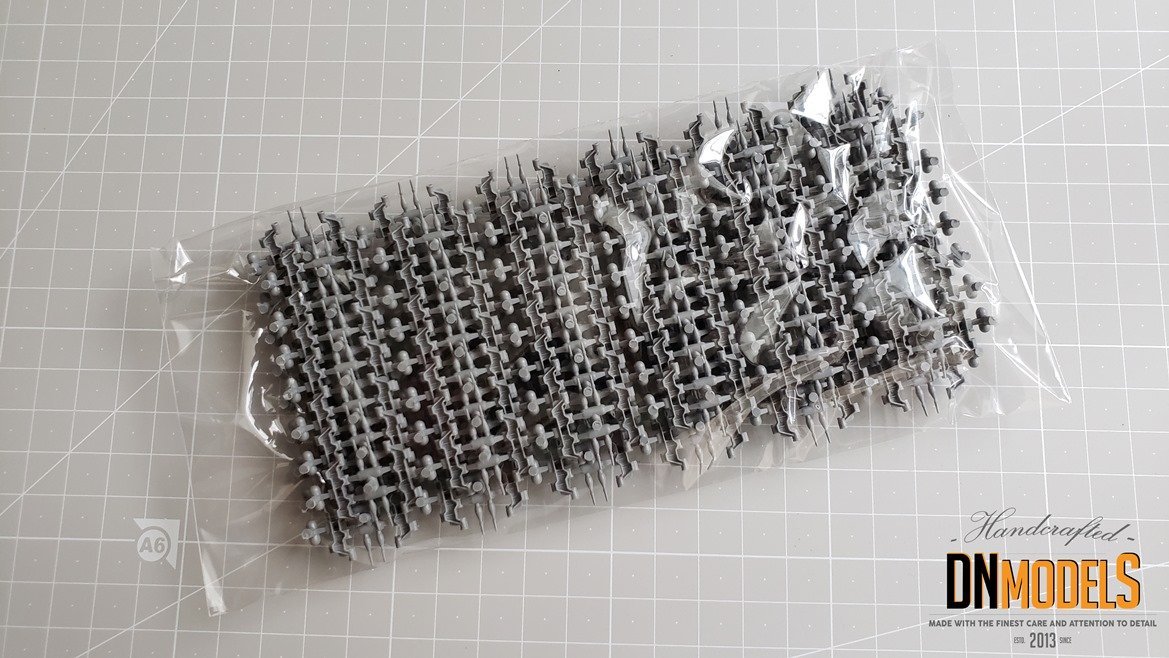 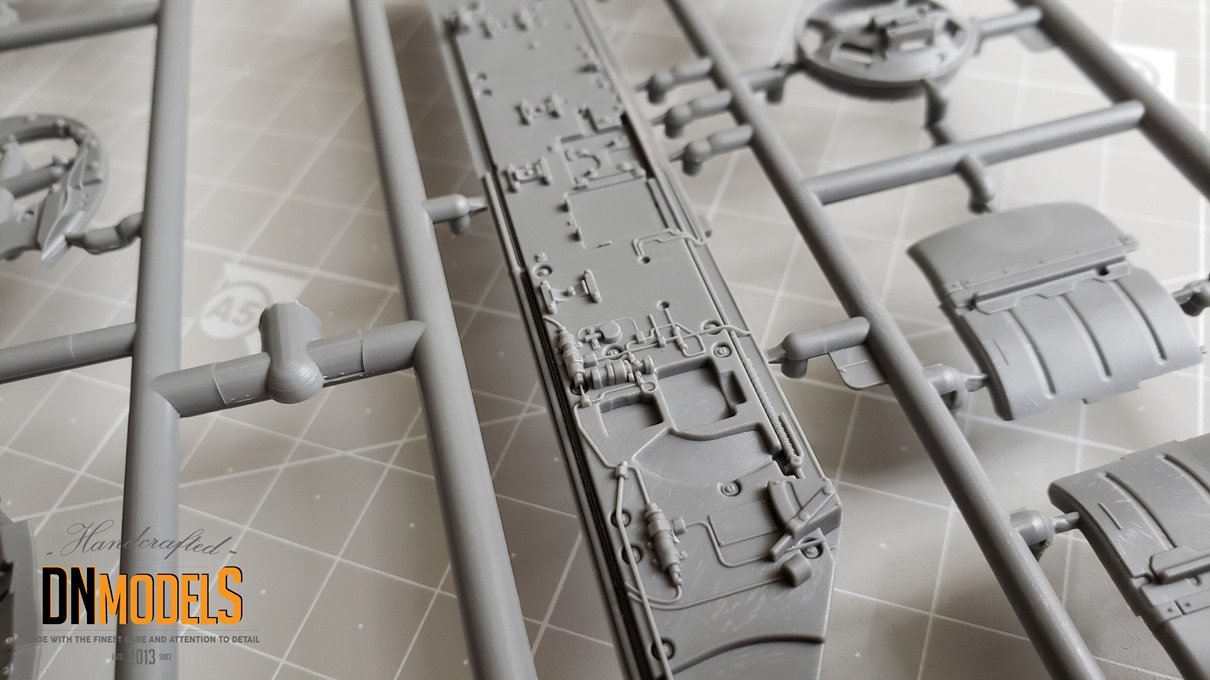 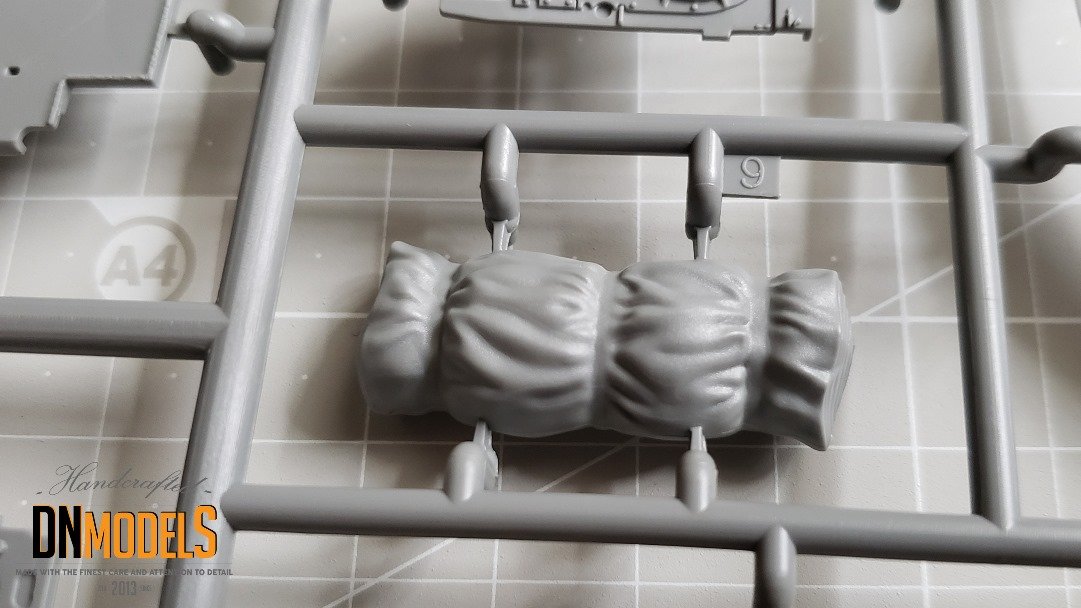 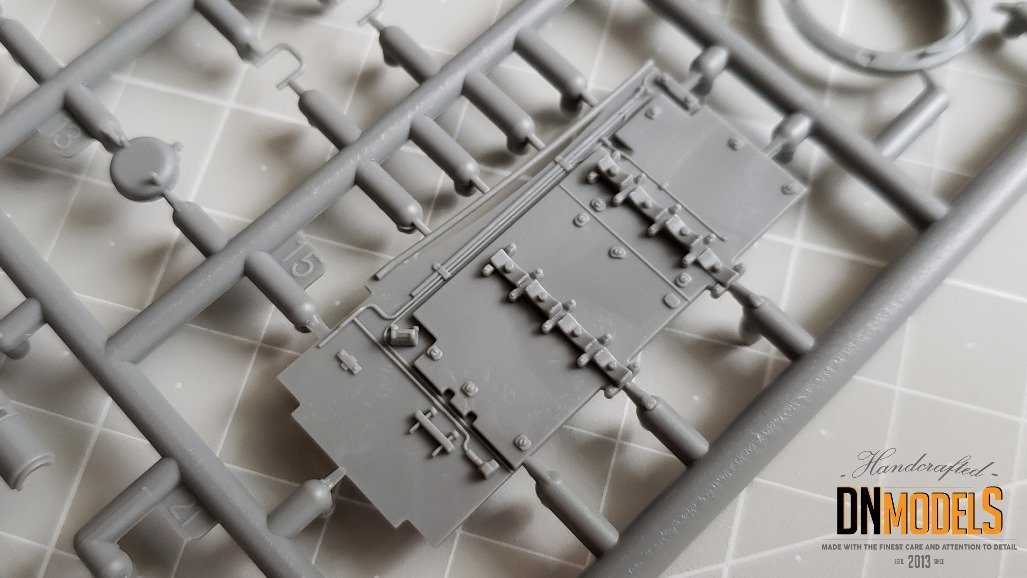 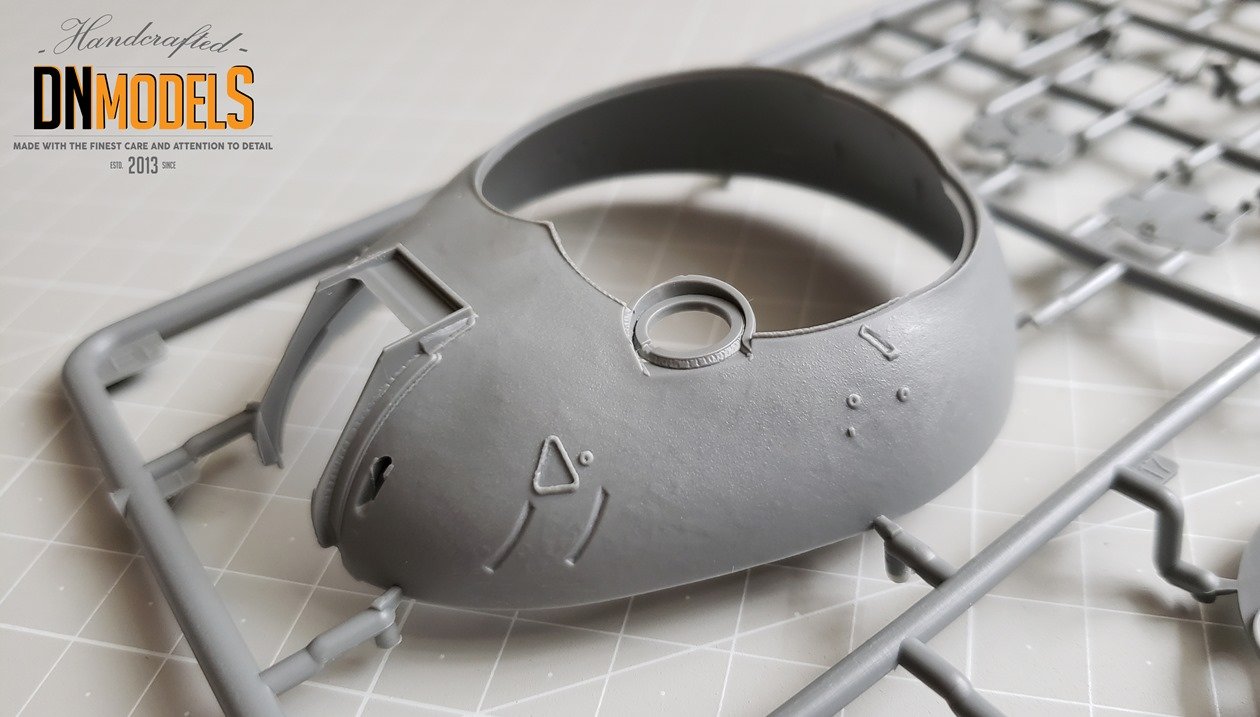 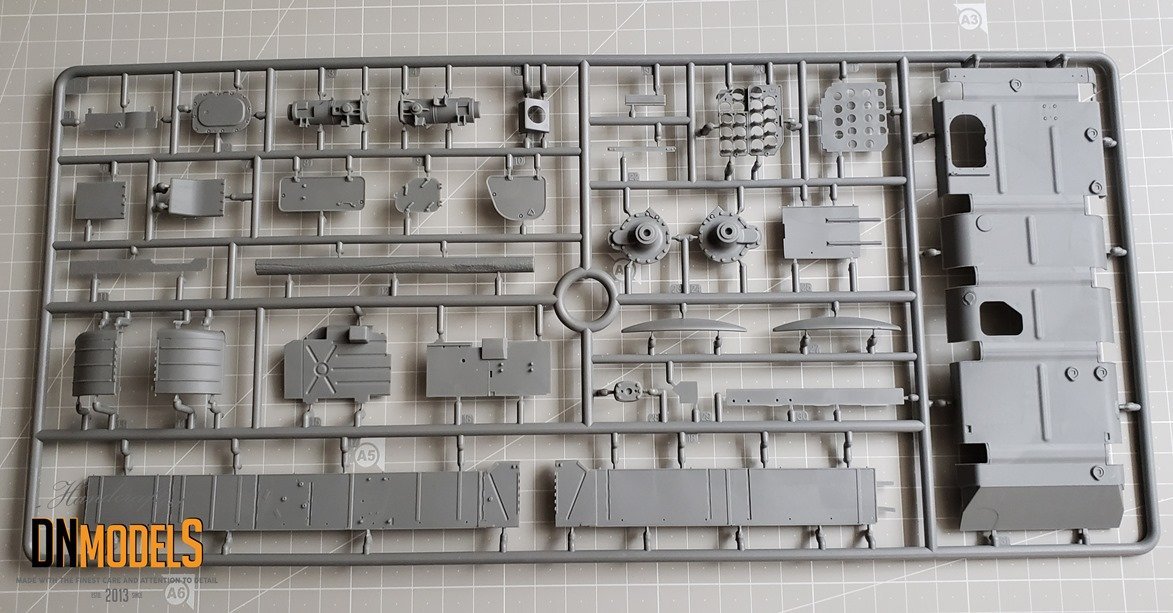 Let’s start with the clear parts. They are the most insignificant part of the kit in my opinion. Nobody associates a tank with clear parts, especially not a T-series one. Aside from that, a person who is specialized in T-55 and professional tanker, told me once that once he saw how Panzer IV prisms look and how they were designed, then he understood what a piece of garbage T-55 prisms were. 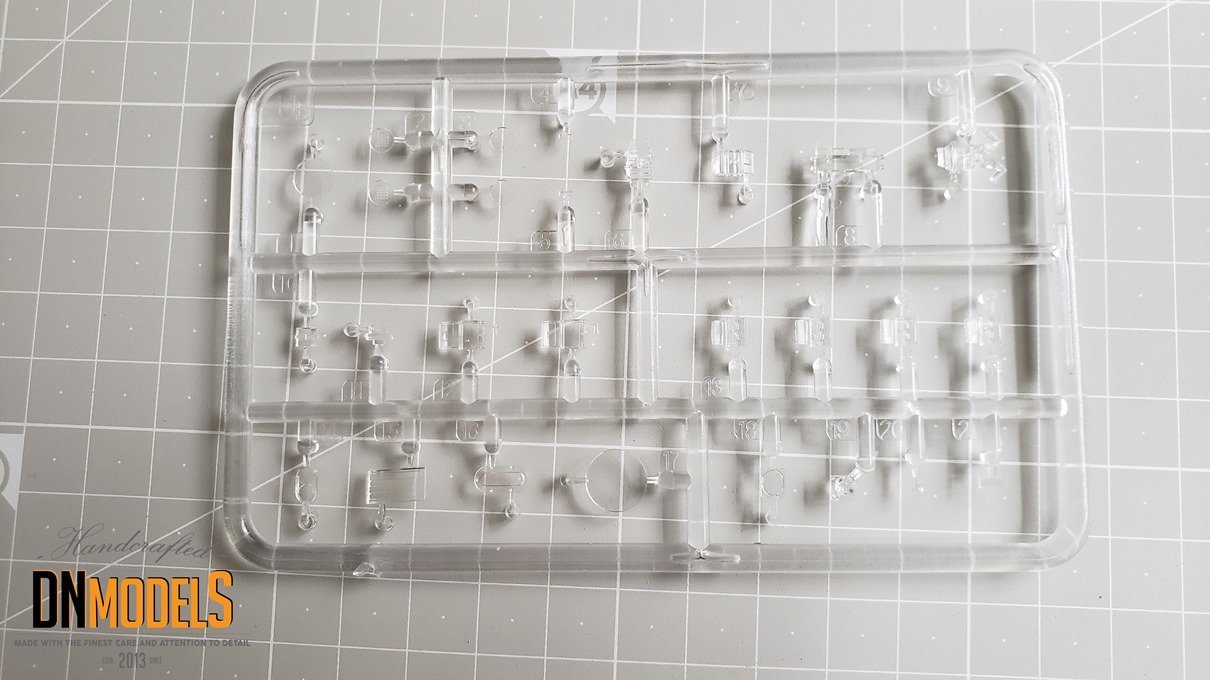 Decals are mostly numbers, with a flag and the anchor of the Soviet NAVY included, but besides the last two, there is nothing overly interesting with them. They are placed on a blue-ish decal sheet, 16cm x 4cm in size and with the typical quality for Ukrainian made decals. Some of those tanks lacked numbers in reality, others were hand painted and there is that third group, that featured a mix of partially visible numbers who were covered with newly painted, often different style numbers, sometimes even different font on both sides of the vehicle. So the possibilities are pretty much endless here. 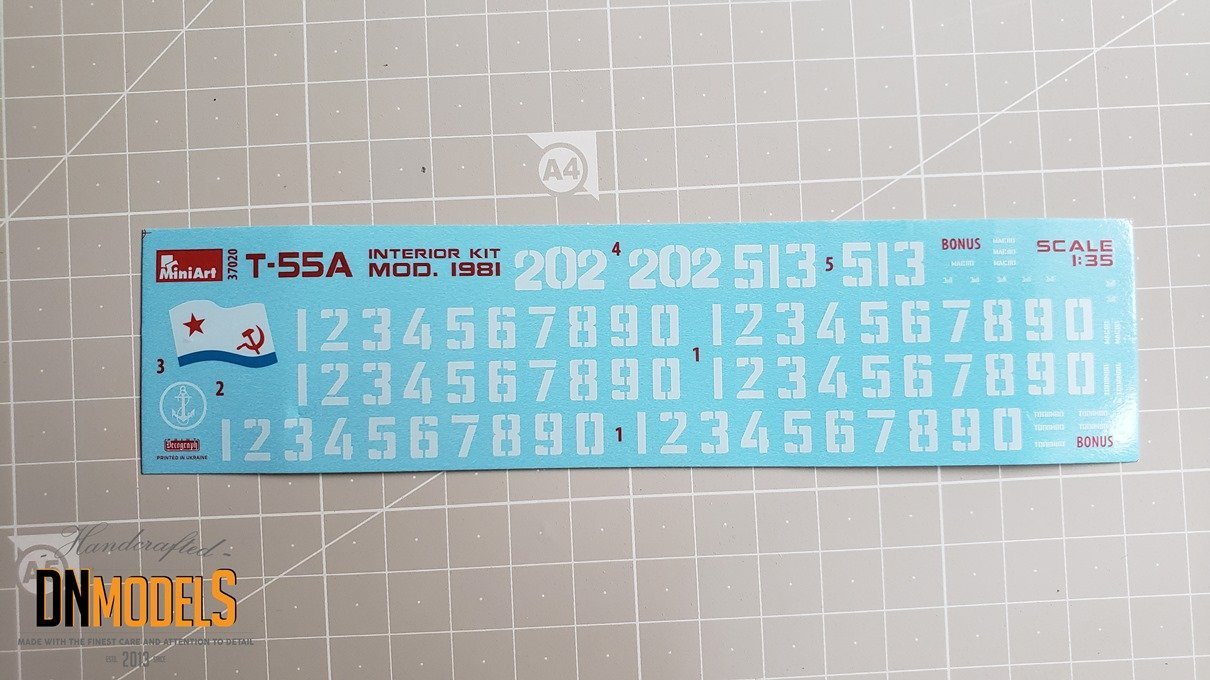 Photo-Etch is most definitely the highlight of all those elements in that section. I know, for many it is annoying part of the building, but some love it. MiniArt obviously respect the photo-etch as a concept, considering that each of their high-end kit features decently large PE set in it. Last couple of years they even pack it separately, in small cardboard envelope, both – for additional protection and for marketing purposes. In my opinion, both goals achieved in very elegant manner too. 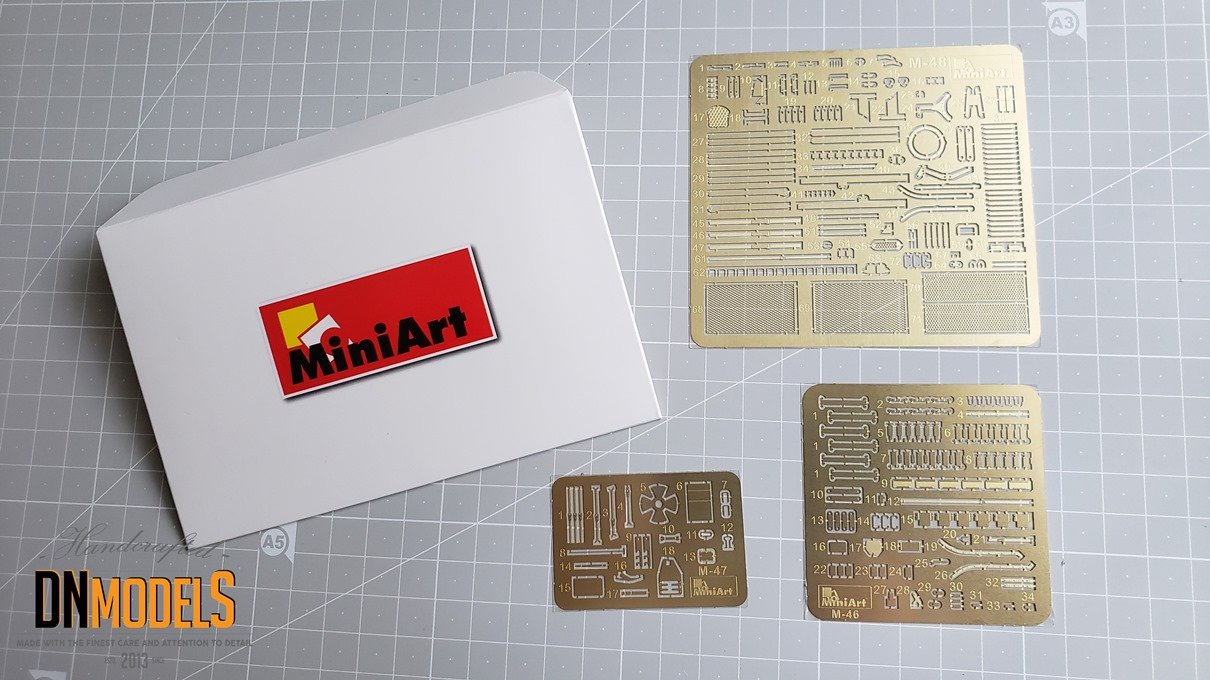 With this T-55A mod.1981 we have three PE sheets, all of them with different sizes and each and every one of them abundant in details. The intimidating thing here is that the only large sections of those PE sheets are the engine grill meshes. The rest is small and intricate and most definitely will be mind-blowing too if properly applied.

The pictures here are the basic options presented by MiniArt, but as you might guess, that is only the surface of a very, very deep lake. We have winter camouflage, as well as the one depicted on the box and of course – standard Soviet Green which is dull, however perfect basis for shading and various weathering and chipping techniques.

Beneath that, and this is not even considering the numerous numbers on the decal sheet, we have unlimited options in terms of colors, damages and so on. Especially based on the detailing of the kit as a whole. In my opinion, it is useless to point out specific variant of such widely used vehicle, because day to day, with so many numbers, well, you get my point. 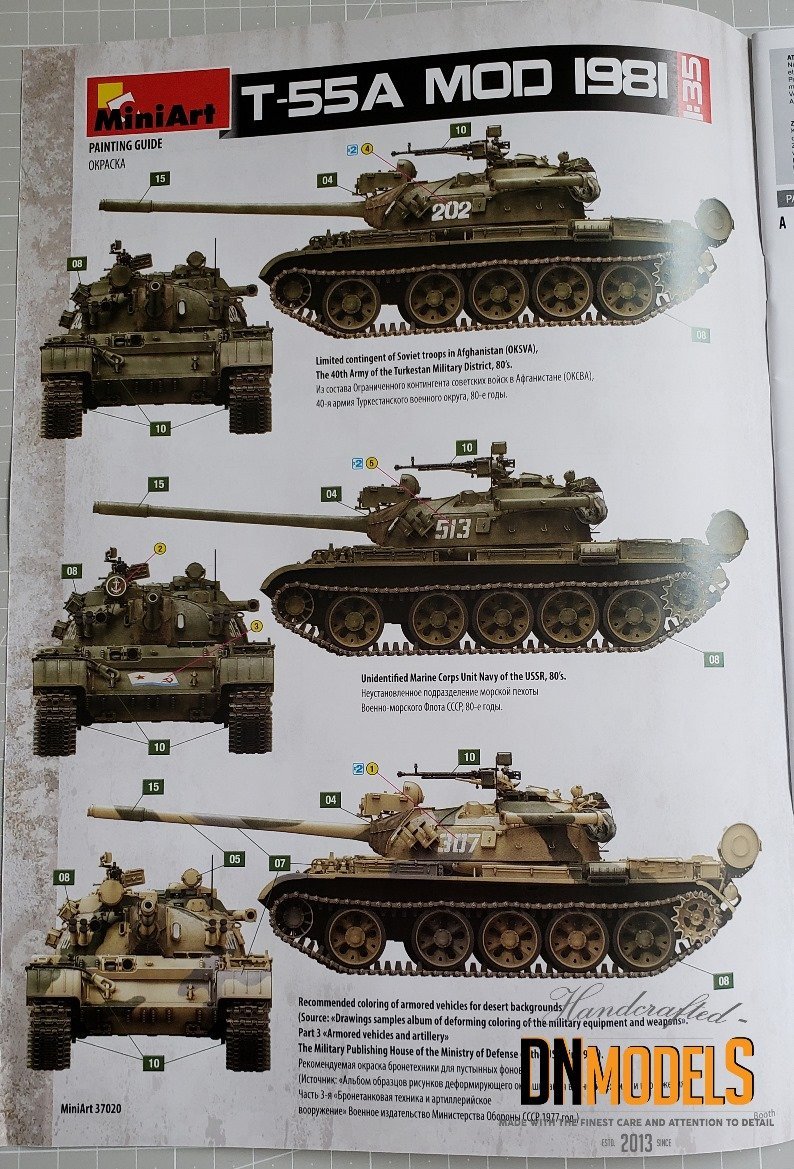 With all that said, MiniArt made their effort to gather additional information, but they showed some reservations, stating that this is “Recommended color” or scheme, which was very clever from their part. We all know modelers are very punctual and they are strict when it comes down to realism. That concerns the above written – with so many numbers, one cannot be sure, except if one wasn’t in direct contact with the specific vehicle. So good choice from MiniArt approaching such delicate subject. 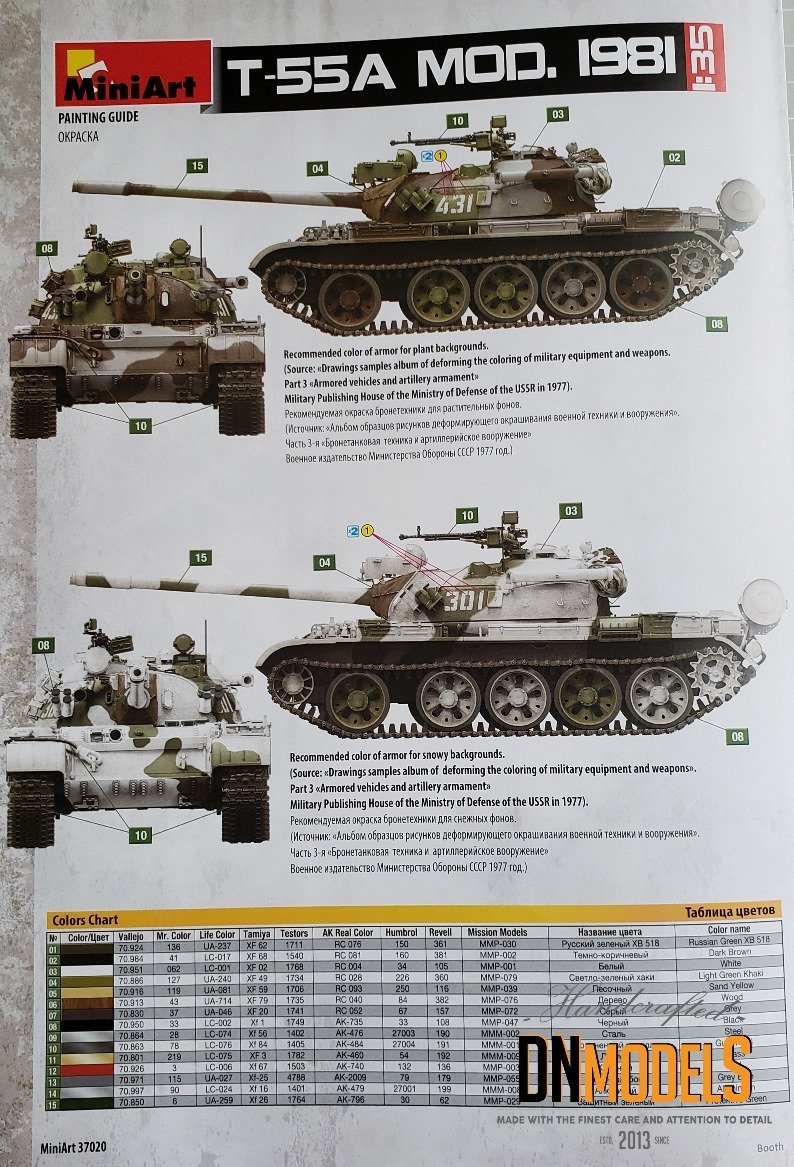 T-55 and T-54s are legends by any means. And MiniArt shows their appreciation in very professional manner with this release. As with their previous ones, including Tiran versions and the Chinese Type 59, they managed to dominate the T-series line of any maker and in any scale. Saying that, I must add that this comes at a price. Truly, this is the best T-55 line of kits ever made. But it is also very challenging for the builder. This isn’t a kit that a beginner would want to mess with. With that said, this appears to be perfect release for experienced and professional modelers and will most likely bring a lot of joy for them.

MiniArt took a different road compared to the competition and are aimed at proving what a contemporary kit should look like through their eyes. With their upcoming release of Focke Wulf What If project, they are also declaring their intentions to step into the aircraft arena. Considering this T-55 and its bells and whistles here, that is both thrilling and intimidating. However, whatever the outcome might be, the modelers will be the winners, especially with the demonstrated level of detailing.