MiniArt keep on providing us with various T-54s and T-55s with and without interior. They are arguably the most sophisticated and accurate kits on the market. Demanding, those kits are not suitable for beginners, but for the experienced modelers they provide with the most one can get out of a piece of plastic.

T-55 on the other hand, is a part of T-54/55 series – the most produced and still the most widely used tank in the history. The vehicle is almost part of the scenery for every armed conflict all over the World. That brings a lot of potential, hidden in those boxes that MiniArt provides.

With all that said above, a person unfamiliar with MiniArt should know, that their line of T’s is quite large. They started with T-44 and the on continued with pre-production variants T-54-1, T-54-2 and -3. Then on, this enormous tank saga that we have in real life was scaled down and continues, now expanding and including the Israeli versions, modified and rare options and probably – much more to come.

That promises to be a huge modeling line in the years to come, but in my opinion it all comes down to T-54 and T-55 and their most used modifications. One of those is this one: examined in this article. Another one is their recent release of T-54A /MiniArt 37009/.

As usual, we get a thick box with 3D renders of the tank on its sides. On the top, a beautiful boxart featuring 3-tone camouflage with black separation lines is shown. It is a Syrian vehicle with relatively new appearance, which implies that it is a newly delivered piece. A story decades old. 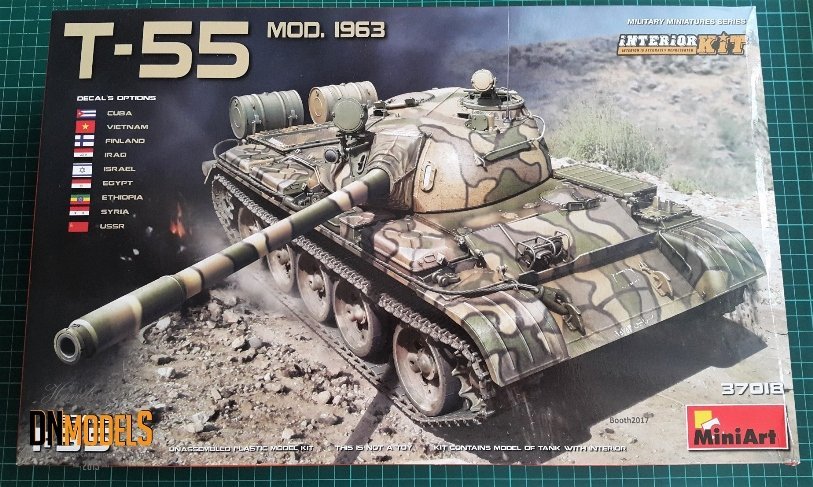 Right next to it there is a list of the options included in the box, which is rather large. Interior Kit logo, standard for MiniArt is placed on the upper right corner of the boxart. That is a bit intimidating and trust me if you haven’t built a tank with interior by the time you get this one, you will be scared once you get to see what’s ahead of you.

The overall appearance of the kit is posh and many will be more than happy to get this box and add it to their stash. The colors are bright but in the same time it doesn’t look toy-ish at all. Just the contrary. Looking at it, it screams: “serious modeling business”. 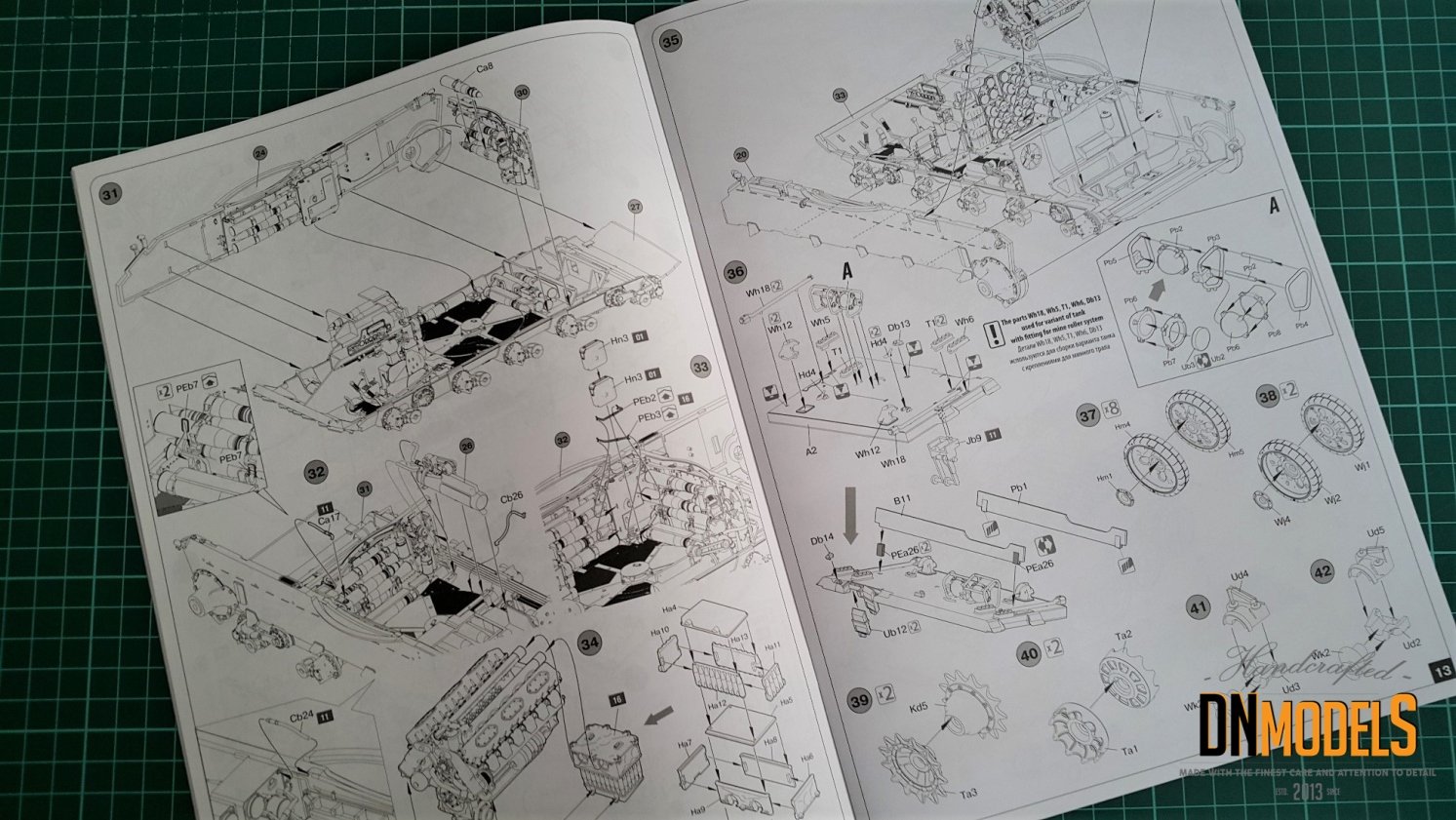 The sheet is a A4 booklet with huge amount of information embedded. The text isn’t that much, but the renders are complex and requires attention. That is due to the fact that there are many tricky parts, options and stuff that moves. Again – a kit not suitable for a beginner.

The Photo-Etch elements can be seen all over the build as well as many parts that can be left aside intentionally. The complexity of the build allows for simulation of damage and many missing elements – torn or removed. That is the bright side of the numerous part count.

Most importantly, everything is described in understandable manner and you won’t have many troubles going through the sheet, just be sure to pay attention.

Of those we have more than plenty. Tracks and ammunitions for example. The track links are beautifully casted but as you might imagine, separate track links are a huge count for such a tank. Besides, they are not placed in a bag like some of the other manufacturers do. Here, they are fitted on sprues. And of course many shells, since we have interior and most of that in real life is full with ammo. 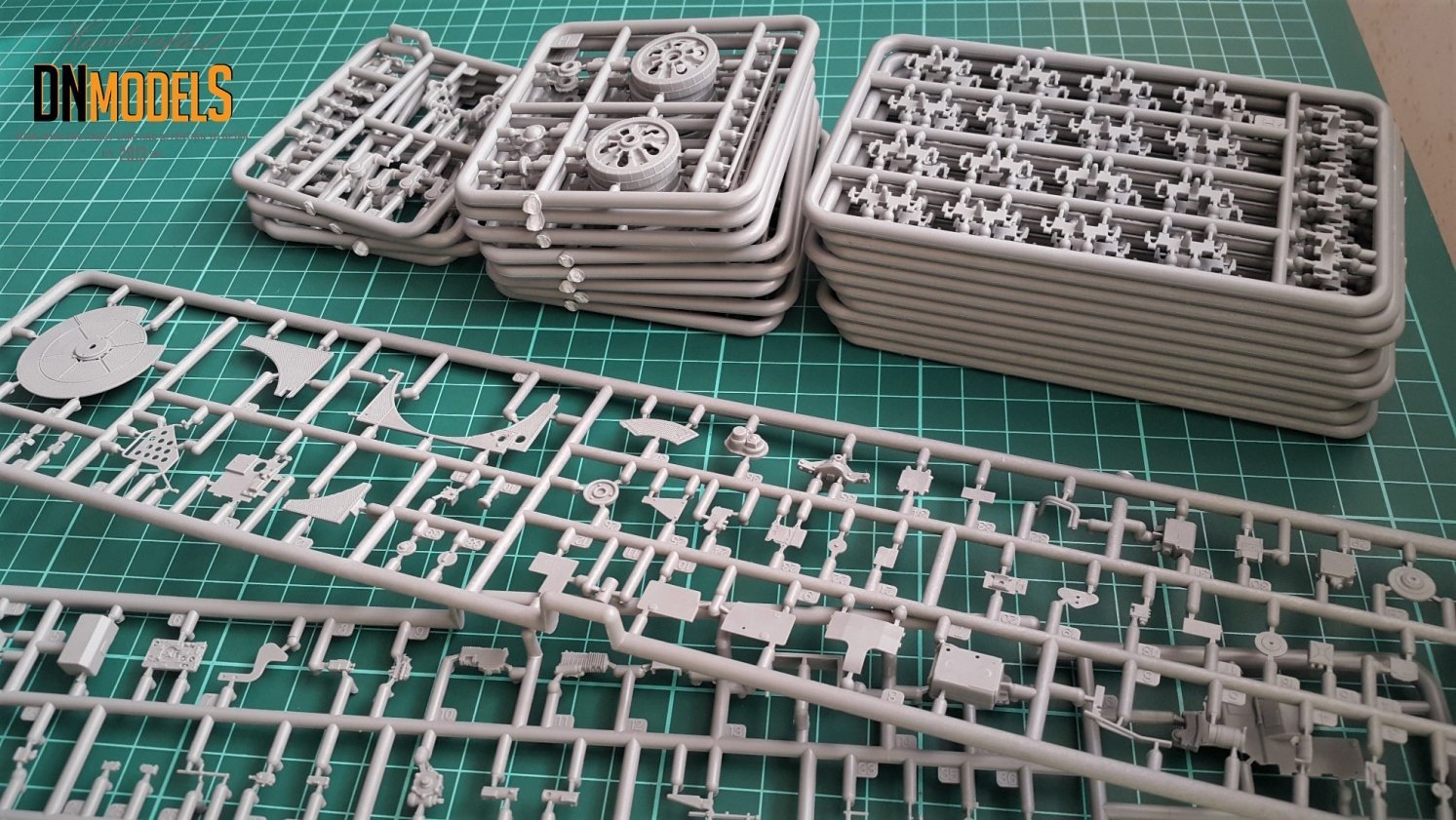 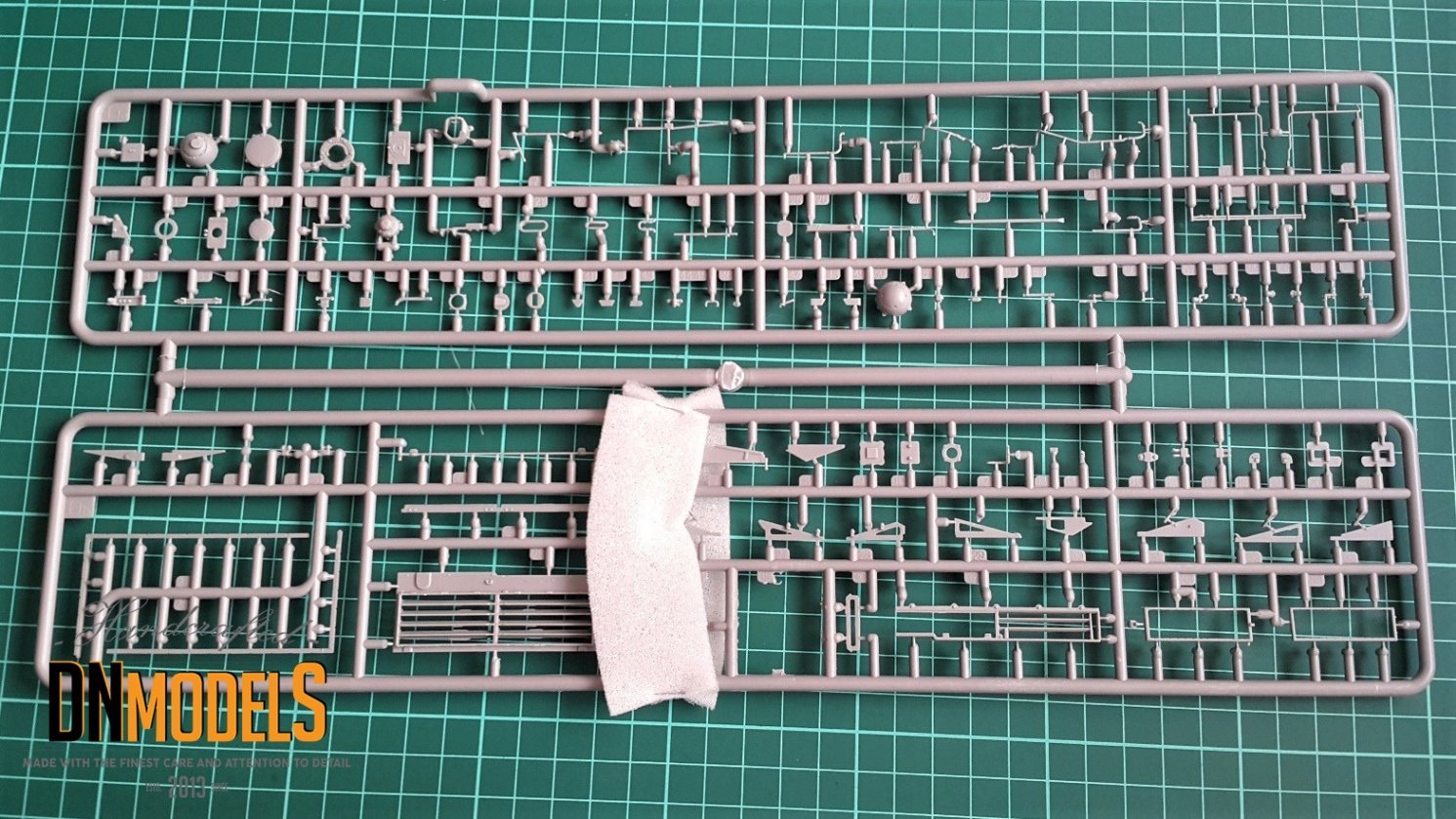 The plastic material is flexible and the new one that MiniArt use for more than 2 years already. It comes from Western Europe and the quality is far better than the one they used before. Back then it was coming from Russia and quality-wise the country is not in the top-count for much of the stuff they produce. It is pretty much the same in color, but all the cracking elements are not present here.

Other than that said above, the sprues are pretty standard as size and count for a 35th scale tank. Maybe a bit larger. Mostly due to the number of fiddly parts and lines. But again – this is typical for this manufacturer and brings specific charm. 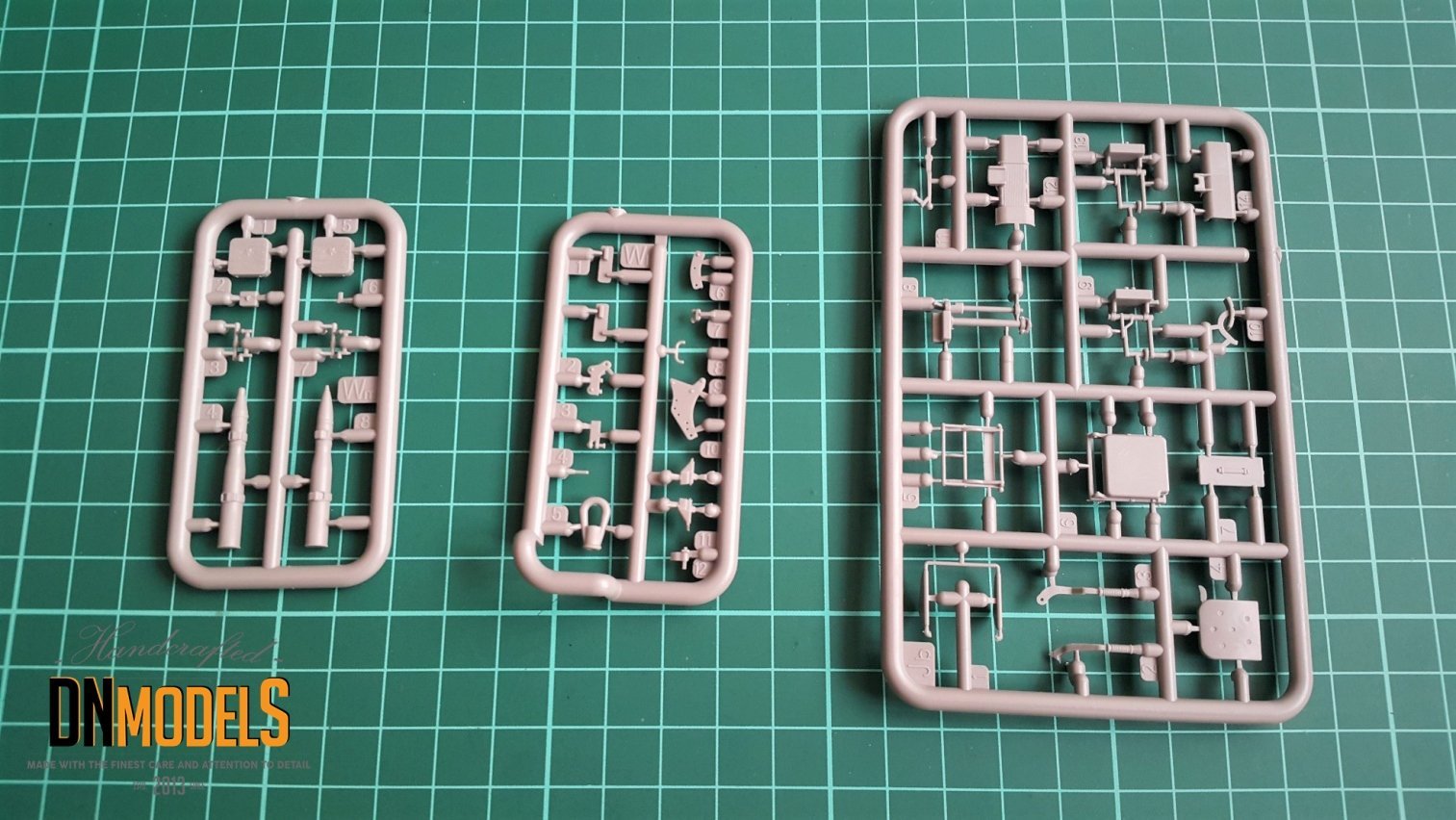 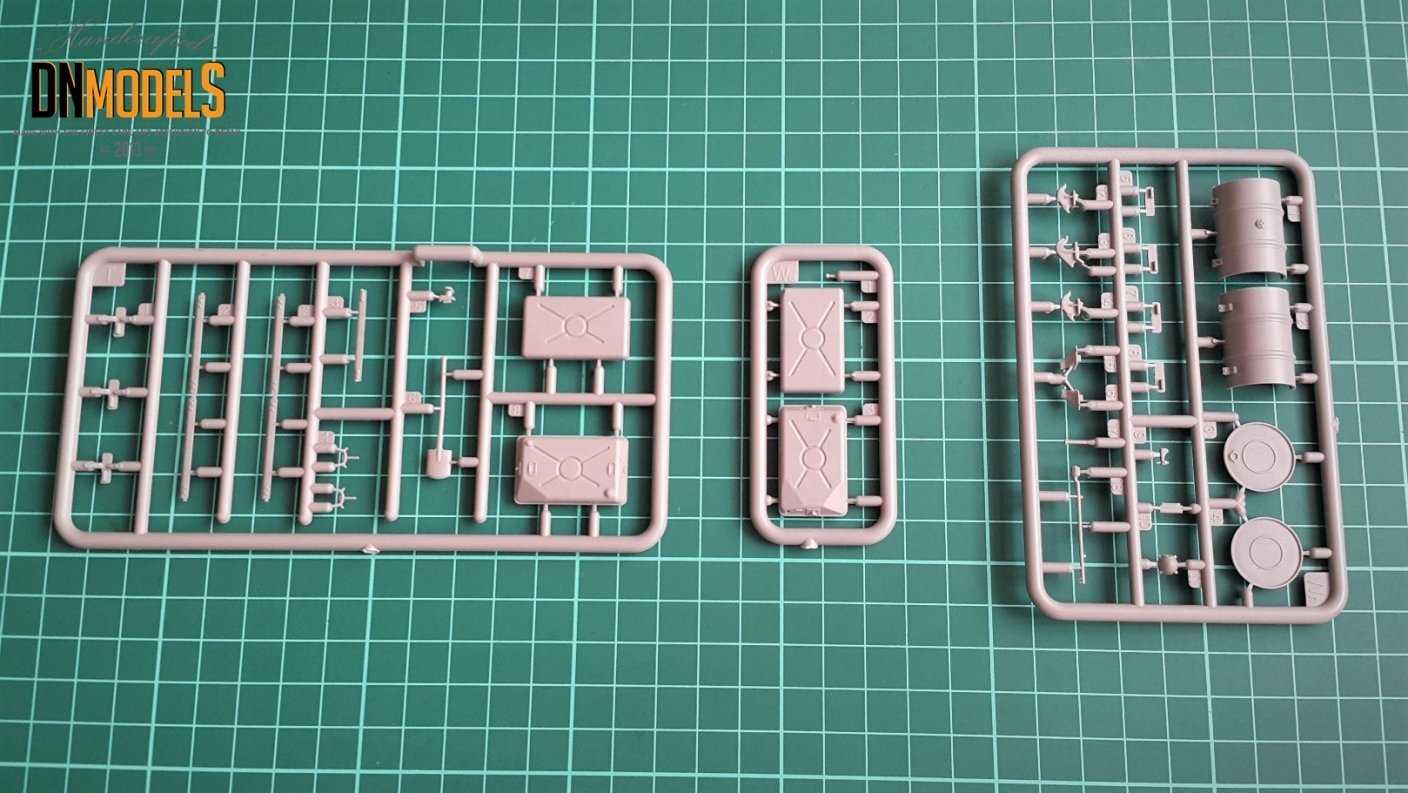 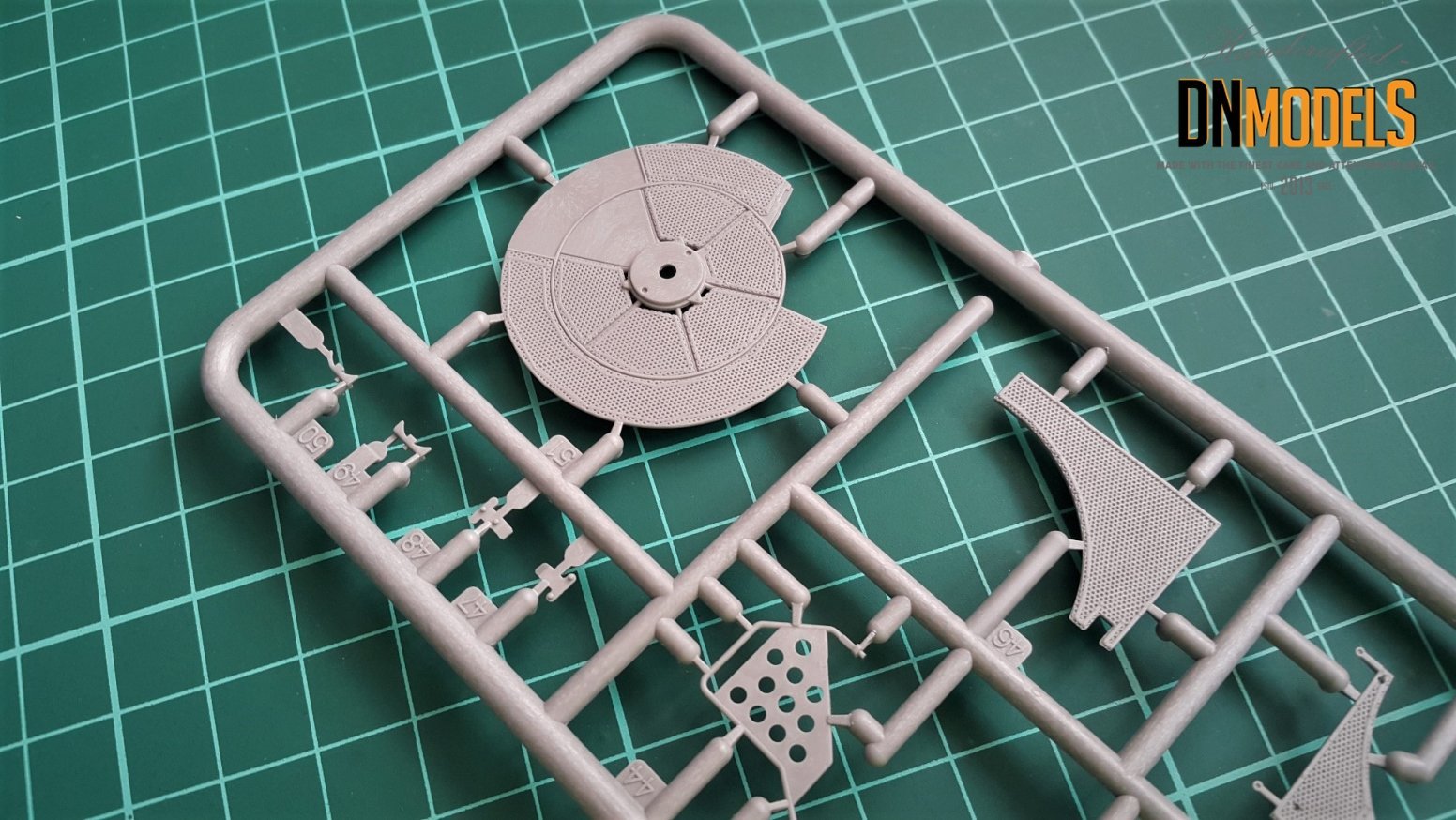 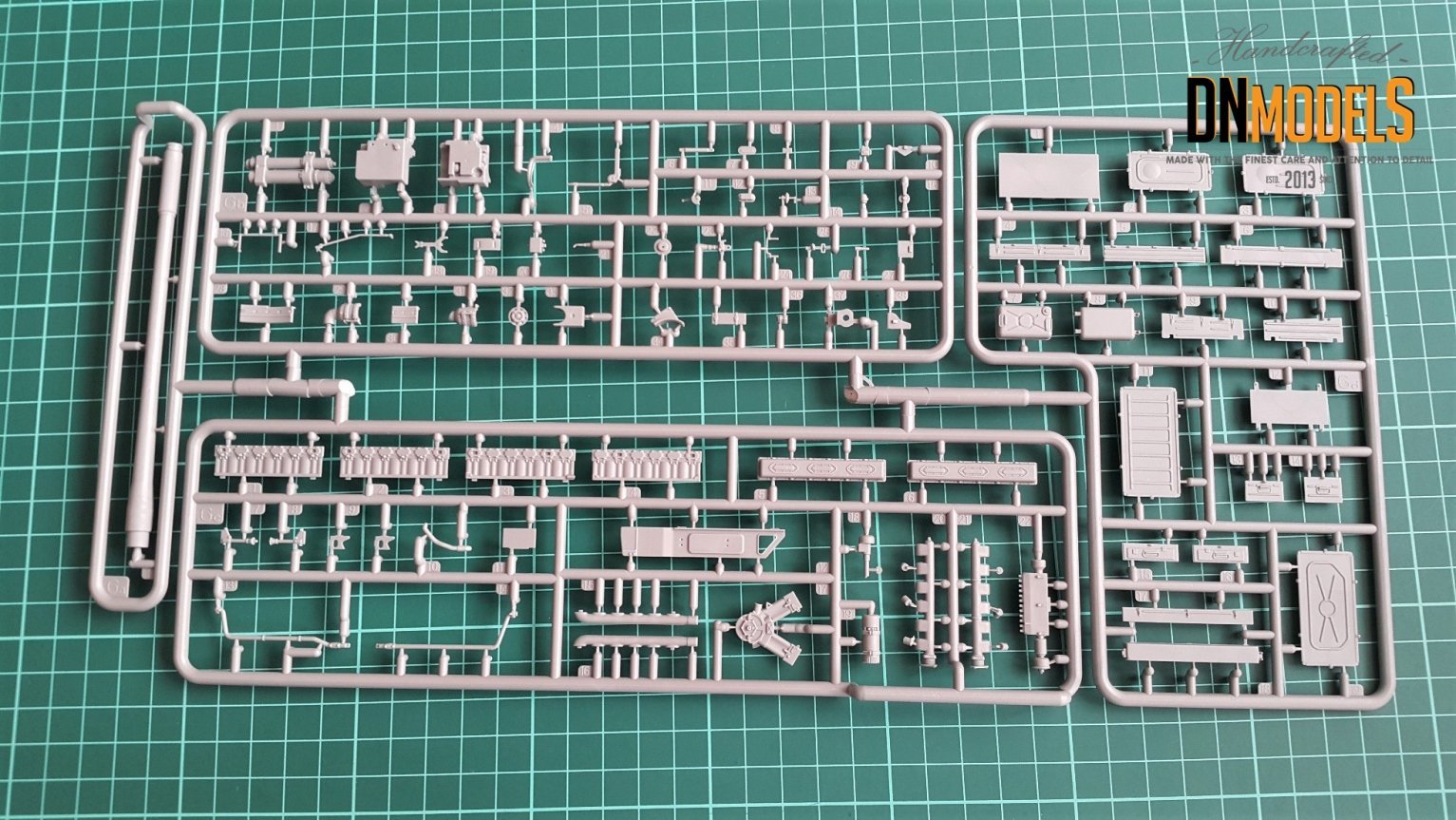 Two sheets of photo-etch elements. One big and one small. Very thin, as usual from MiniArt. Meshes of the engines being extremely delicate and fragile. The downside of having that thin sheet of PE is that you can hardly sand that. Of course, there are a lot of intricate items that goes all over the tank on those. Engine parts, gun barrel parts, brackets or belts. You name it. Pretty much everything that you might want to ask from an aftermarket set and here it is in the box. 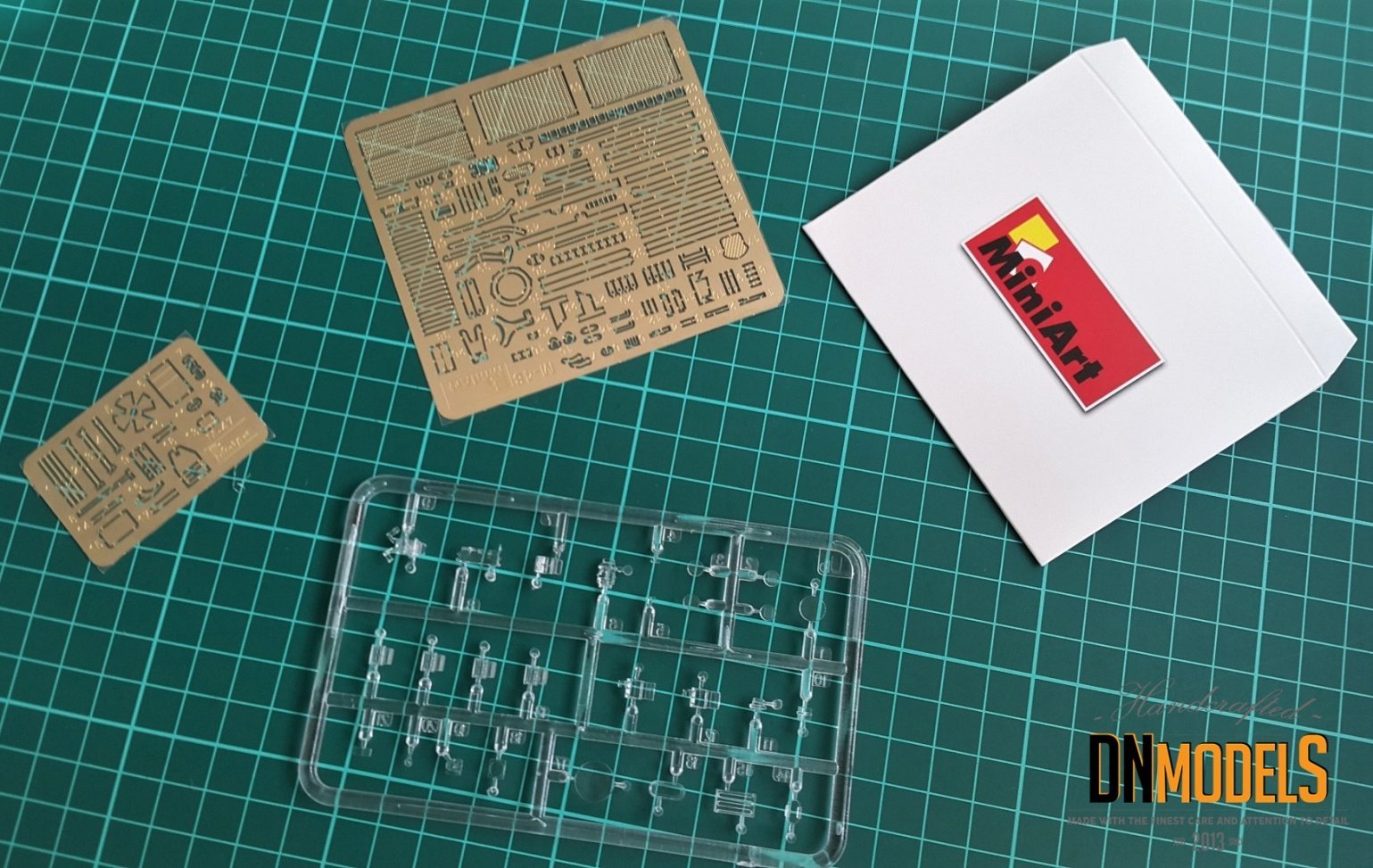 Decals are not that many, mostly numbers and specific insignia. That doesn’t mean that there aren’t more than enough options included. Just the contrary. As we all know, Soviet tanks are always shy on markings, as well as those sold to other countries. There are exceptions, but nothing significant. Besides, based on what’s in the kit, you can do a lot more than it is offered as decal options. 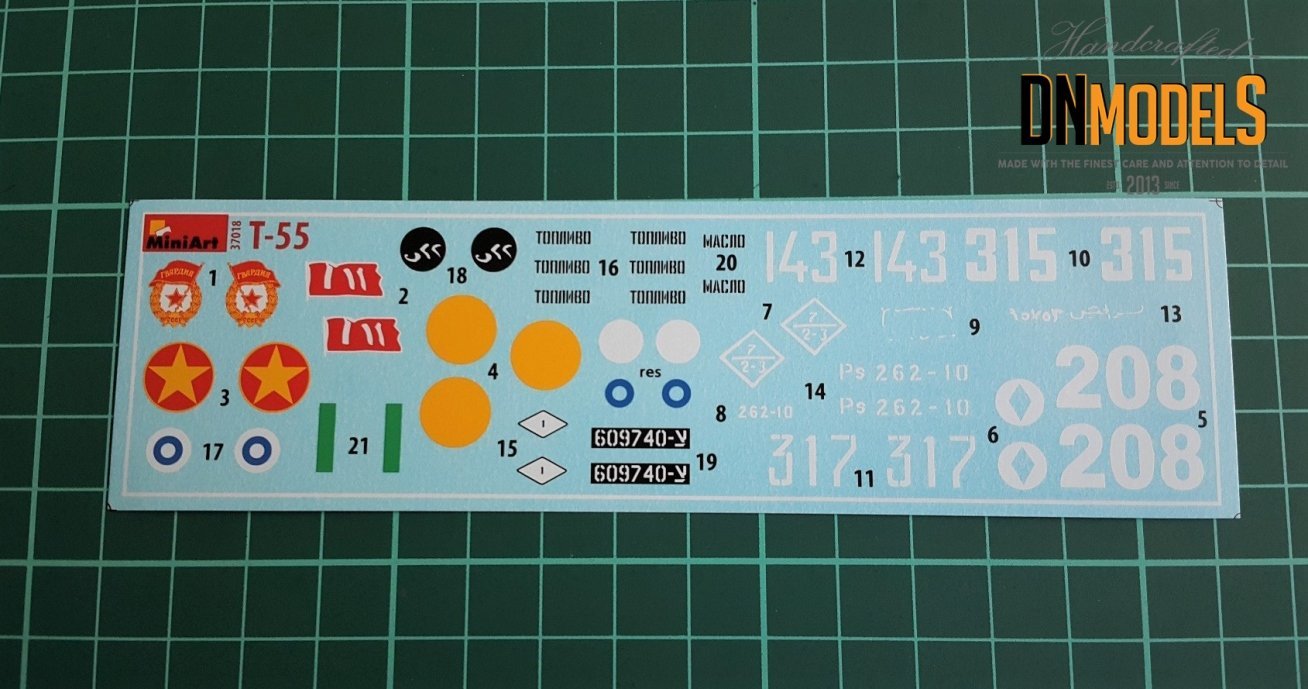 Painting the tank could be journey and especially a piece from the T-series. We have Cuba, Vietnam, Finland, Iraq, Israel, USSR, Egypt Ethiopia and Syria included as options. There are many variations on those plus winter camouflages on some and of course – late versions on some of those, seen in action on the news today. 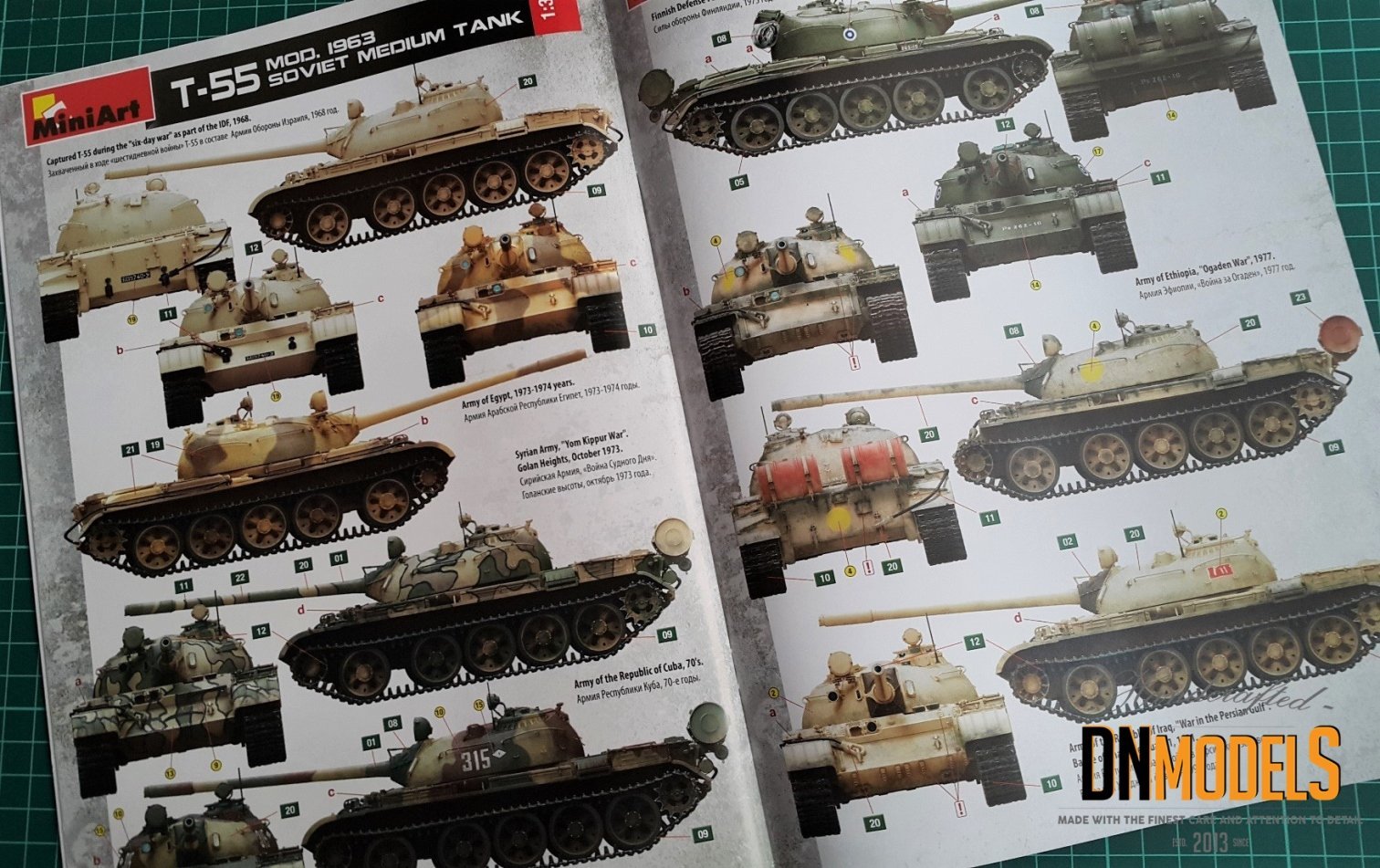 Some of those options are very colorful in terms of painting, other ones are single-tone camouflages, which does not make them dull though. It makes them a perfect platform for weathering and paint modulations and all kinds of such tricks. Especially those desert based vehicles with the specific wear and tear from the sandy and dry climate. I payed a lot of attention to some and if you are interested to learn more, check out the full video review of the tank.

Is this the best Cold War kit ever? Well, it is pretty close to such definition. If it weren’t the complexity of the engineering and the enormous number of fiddly parts – most definitely. But with those, simplicity and pleasure of building is a bit forgotten by the manufacturer.

Many enjoy such kits and it is nothing wrong about that. The best kit though, should be a perfect mix from simple build, part count and options included. MiniArt 37018 is very near to that. However, there is some things to be polished. Although, I believe that MiniArt made their own style and this style includes those countless parts and tiny lines and elements. If you are an expert builder, this shouldn’t worry you. Actually, if you are an expert, this should make you happy. 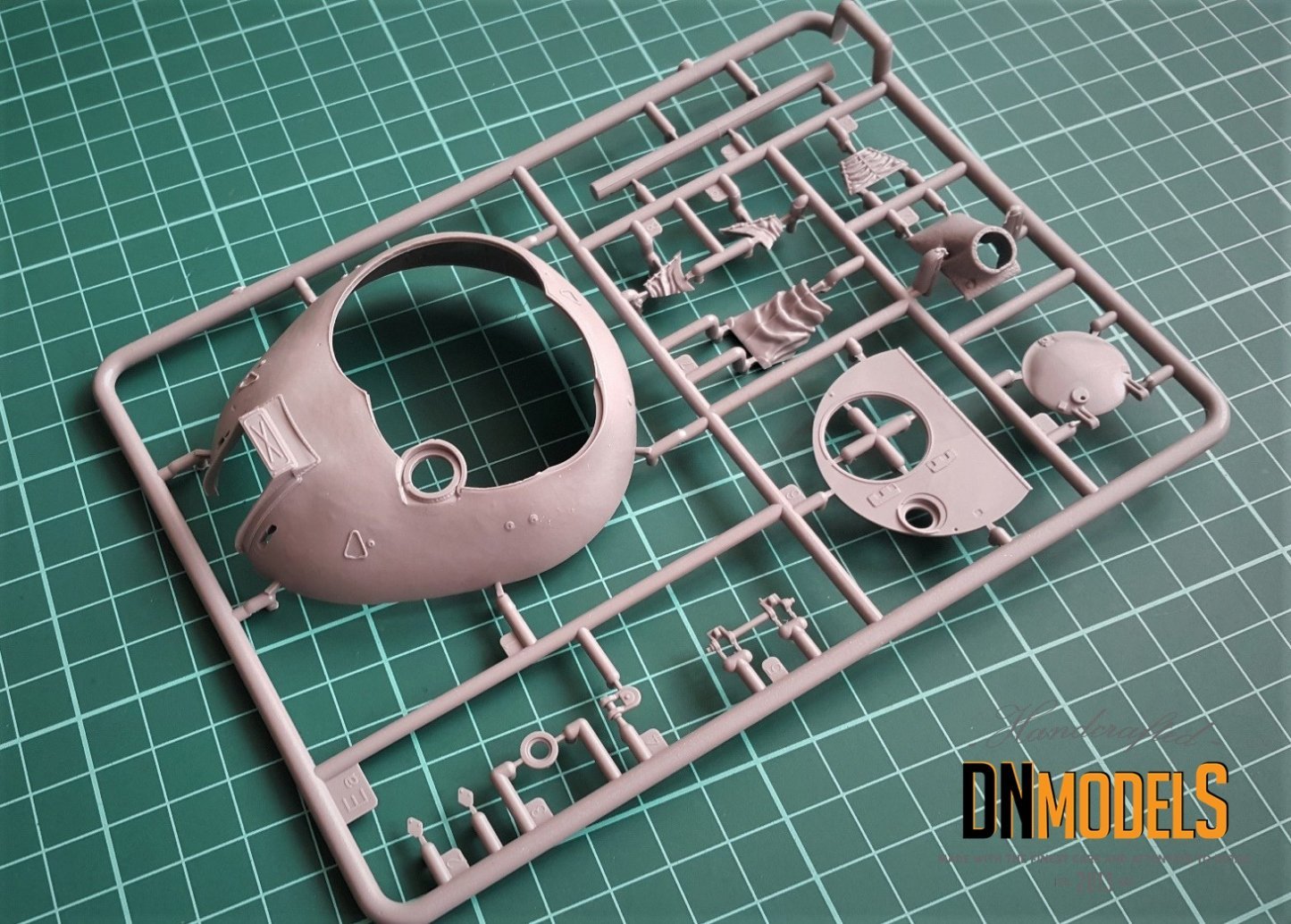 With all that said, MiniArt’s T-55 is one of the best Ts out there and we can only hope that soon they will move on to the T-62s and then on to -72s. As with all of the others T tanks in MiniArt’s line, we have an option without interior and that pretty much answers any additional questions in regards to the part count. Overall, this kit is a must for every Cold War fan. For some it might be the version without the internals, but whichever of those you choose, be sure to get one. It is a true masterpiece made from plastic!