is the first improved variant of the vehicle /T-54 tank/, featuring new wider tracks, different turret, improved armor in the front parts and it lacks the fender’s machine gun. The production started in 1949 and the T-54-2 was produced until 1951, when T-54-3, further improvement of the concept, replaced it on the production line. More than 1200 were built and were used with the Soviet forces, with no records about combat use. There is some information about its usage in some Middle-Eastern conflicts, but nothing that is confirmed. Just rumors.

MiniArt T-54-2 is the second kit that the Ukrainian Company releases in 35th scale from T-54 line. The first one was the initial version – T-54-1. Soon it will be followed by more, but in this article we will focus on kit #37004. It is a full interior kit, packed in a nice big box, with orange sides. This was the first difference that I noted – before with T-44 and the T-54-1, the boxes were red on the sides, and now we have a new color, which probably might be used from now on with MiniArt’s kits.

Opening the box, the neat arrangement is the first thing that catches the eye of the modeler. It is a deep one, with barely enough space for everything. That is the reason why MiniArt chose to pre-pack the sprues in separate bags. We have two transparent packages – one for the track sprues, which also holds one engine sprue, and one bigger – holding the larger sprues, the clear parts, photo-etch and decals.

Instruction sheet in the form of a nice booklet is on the bottom and it is quite thick too. The quality here Is very high and can be compared only to Eduard and Meng booklets. We have color inside, as well as quality tank profiles for the marking options. Also clear depiction of the sprues and the paints to be used.

As with the other T- series, the booklet of MiniArt’s T-54-2 features the build of the tank with all of its interior. That includes driver’s compartment, fighting compartment, complete engine and nice goodies like all the ammo and small details, plus active suspension. 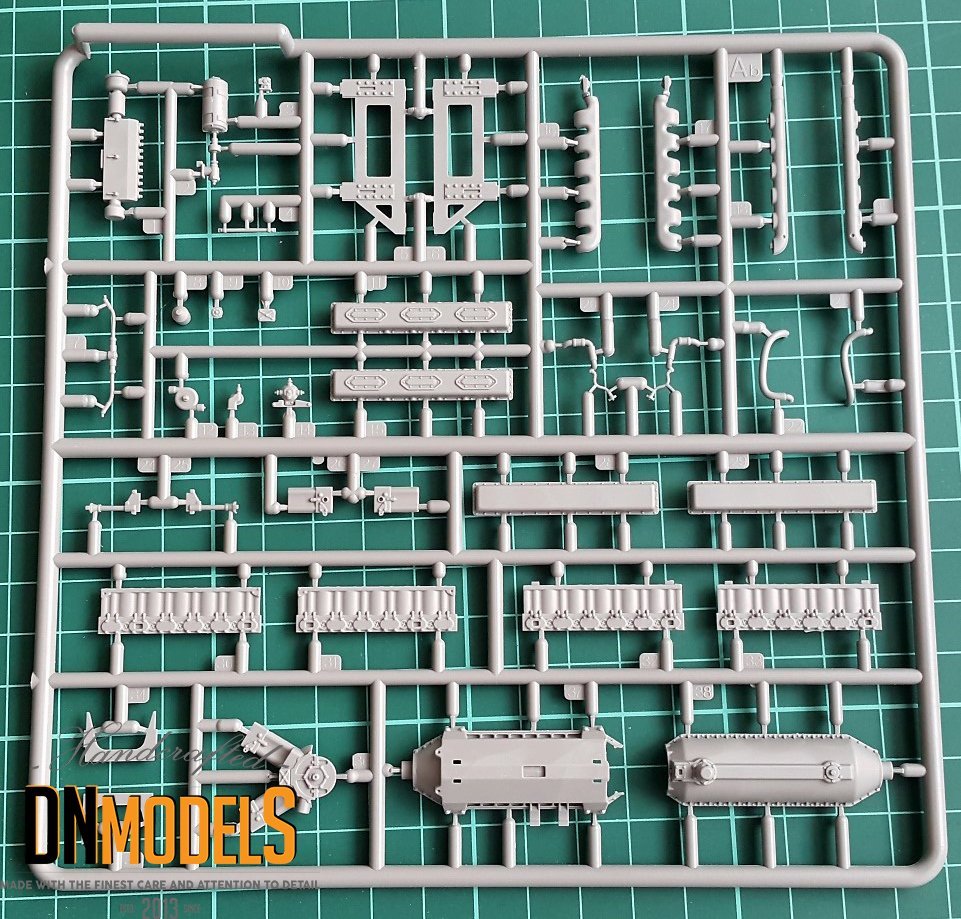 We have a nice detailing on the underside of the fenders, featuring photo-etch parts and many other things around the whole build, which makes that T-54-2 one of the best kits available on the market.

The texture on the turret and hatches is realistically represented, with welding lines nicely replicated all over the vehicle. Everything is thin and delicate, and requires attention. Another example we have with the track links. On the underside of those we have molded the production markings, which are so small, that you will need a magnifier to see them clearly and up-close. They will remain hidden behind the weathering probably, but in case you want to make a museum piece or not-so-weathered tank, MiniArt kept an option open for you.

Fuel lines are great, thin and flexible enough. Made from the new plastic material that MiniArt is using for year and a half now. All small details too. In general, everything looks very promising!

T-54-2, as T-44, T-44M and other nice MiniArt kits comes with an engine. Very cool one, with little- to no-room for improvement with scratch build. The V-54 engine here is something that you can easily take out of the box /and the context of the kit/ and build it as a stand-alone separate kit by itself. Not surprisingly, MiniArt sells similar engines as a separate item numbers. It is well detailed, all-round plastic piece of art, with all details needed to make a perfect replica of the real V-54 in scale. As suggested, you might complete the engine and install it into the built T-54-2 here, but in my personal opinion, that is the secured way to lose some of the details that comes with the kit out of the box. For me, hiding this inside of the engine bay, with that little visible space left is just a waste of one perfectly looking engine. I would better leave that aside, and close the empty engine compartment, just to show off that V-54 outside. 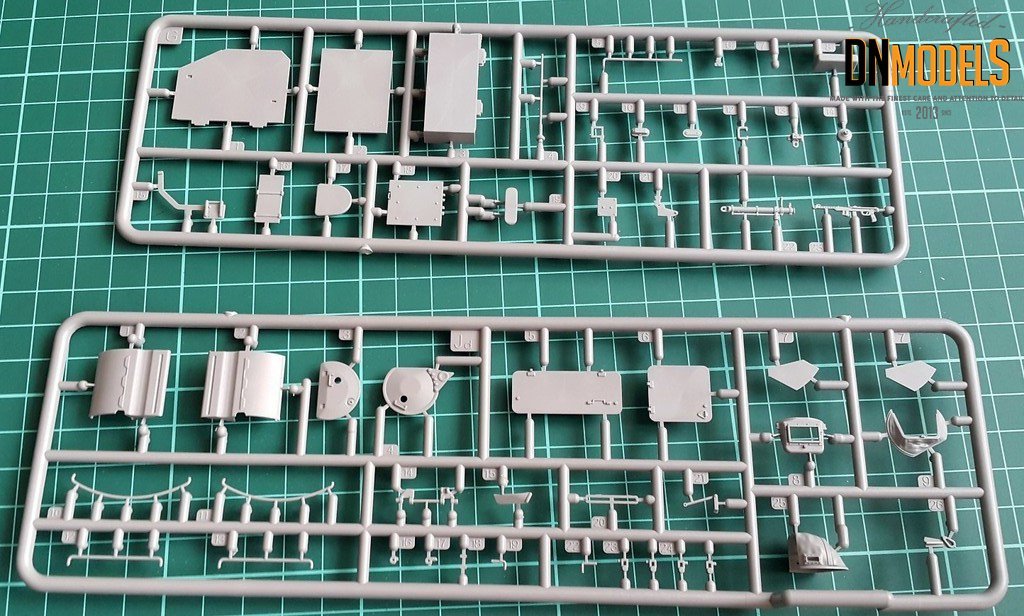 Here aftermarket companies lost the battle. Or almost. A very nice try with the gun made by MiniArt with #37004. Hopefully, not only with it. The gun has some geometry in real life and everything is spread onto one sprue with fine details and little to clean. Properly explained in the instruction sheet and how it should look from the front. That is very nice touch and the only thing I would’ve added is metal gun barrel for the tank and for the DShK. Even though the tank barrel is one-piece part.

Two thin sheets with almost 100 details on them. Especially nice are the engine meshes. They are very thin and you have to be extra cautious when sanding them if you ever decide to take that risk. Some other small parts like brackets or under fender details are there too.

Maybe there could’ve been more, but for me that is plenty! Not many love PE details but nowadays this is a must and MiniArt’s T-54-2 has just enough for the perfect job! 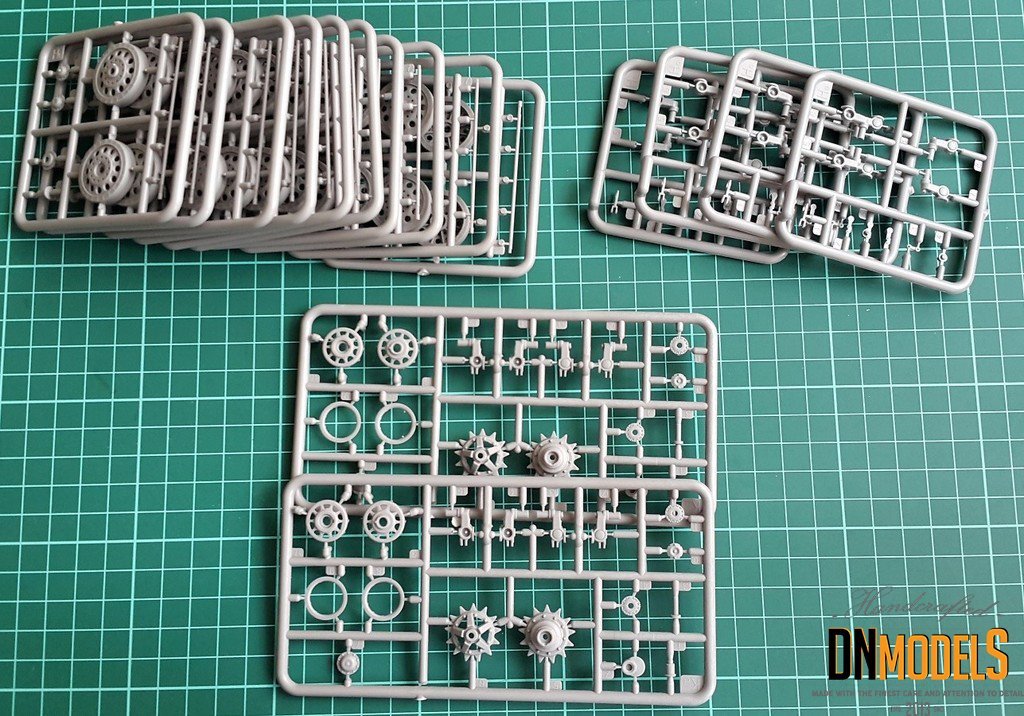 Clear parts are not the most important thing when it comes down to tanks. Especially older models like T-54-2. Here we have a sprue though, crisp and nice, with periscopes and small details all over it and it is clear enough to use its transparency to brag about. However, we all know that in the real life those parts quickly become dirty and hardly visible on the vehicle, so in case you want to go down the realistic road, you won’t pay much attention to that.

The decals of the T-54-2 are another not-so-interesting part of the kit. We have small blue-ish sheet with some small writings like “Fuel” and “Oil” in Russian, as well as some numeric combinations. Decals that comes from MiniArt usually are nothing exceptional and this sheet is like that as well. It isn’t Cartograf, so you cannot expect much from it. It will work fine probably, but I bet that a tank without any markings will do pretty much the same job for you. 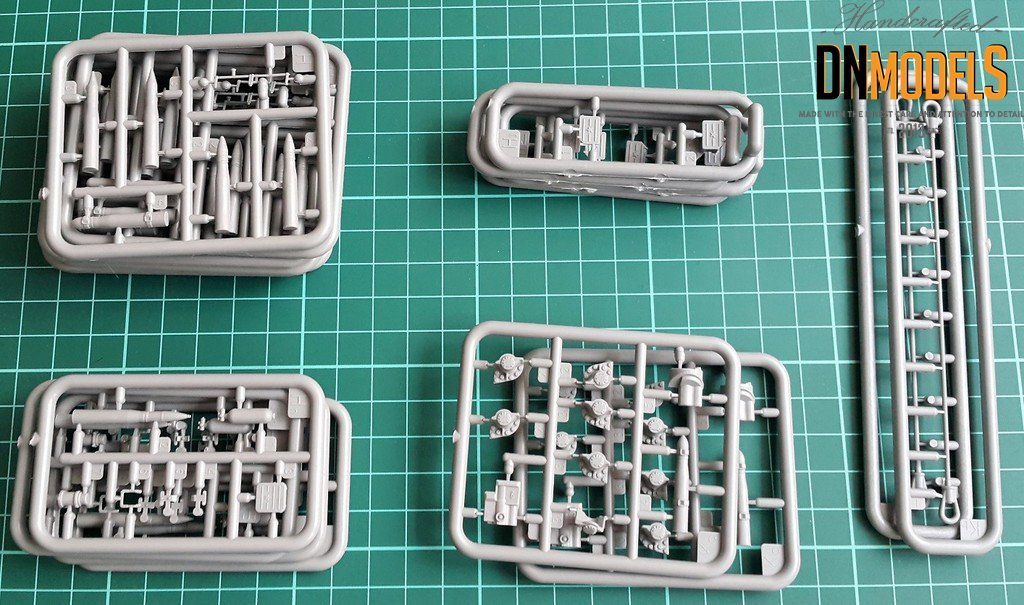 We have 6 in total. They are all from the 50s. All – Soviet/Russian Green painted T-54-2, all with three-number combos on the turret. Some feature additional small decals, but nothing special. The problem with the marking options is that there isn’t much information about this T-54-2 in general. It was quickly replaced by the latter versions of T-54 and T-55 and soon after, T-62. So with such small produced numbers /for a tank of course/, it is no wonder that the marking options are almost equal in appearance and kinda boring. This isn’t anything else but a poor history keeping. Soviets, with their secrecy mania often neglected technological advances of the era, throwing the period into oblivion, not allowing proper documentation to be made. Especially for military stuff. Tanks for example… No pictures, no videos, or if any – the less the better! 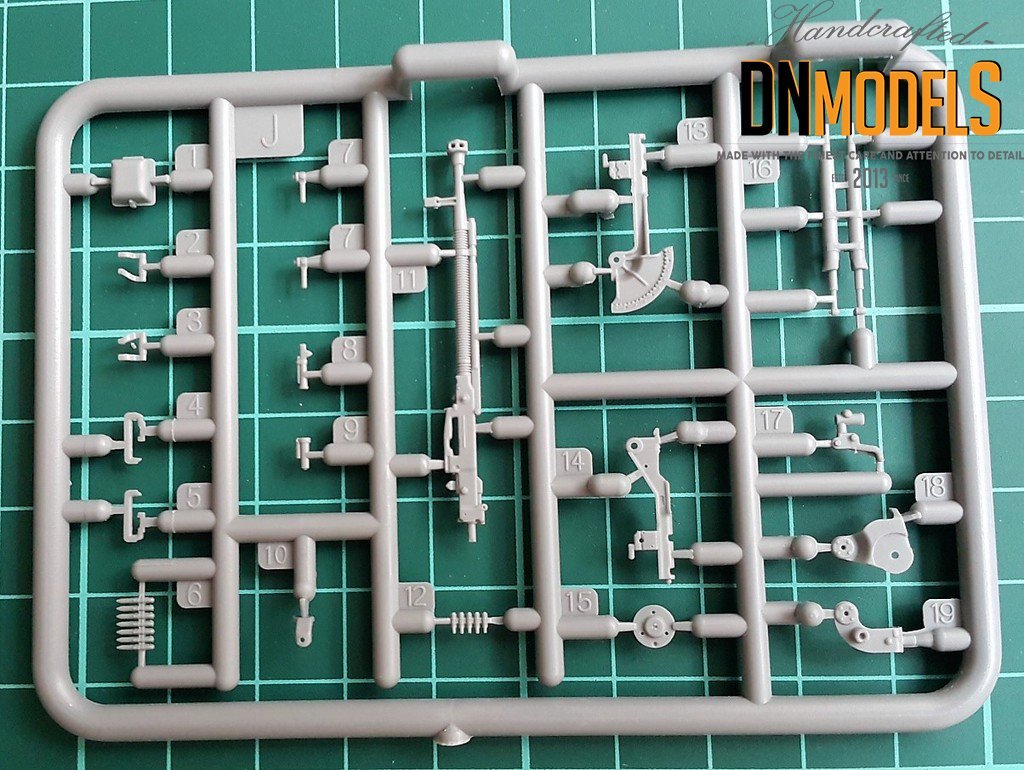 The rest 92 are photo-etch details.

We have active suspension, V-54 engine, one piece gun-barrel, wonderful DShK gun, full stack of ammo /for more than one thank if you ask me!/, full interior and wonderful tracks. Very nice stowage bag, better compared to the previous kits, beneath fenders details, even a shell that is to be placed in the loading mechanism of the gun! Positionable hatches, fuel lines etc. 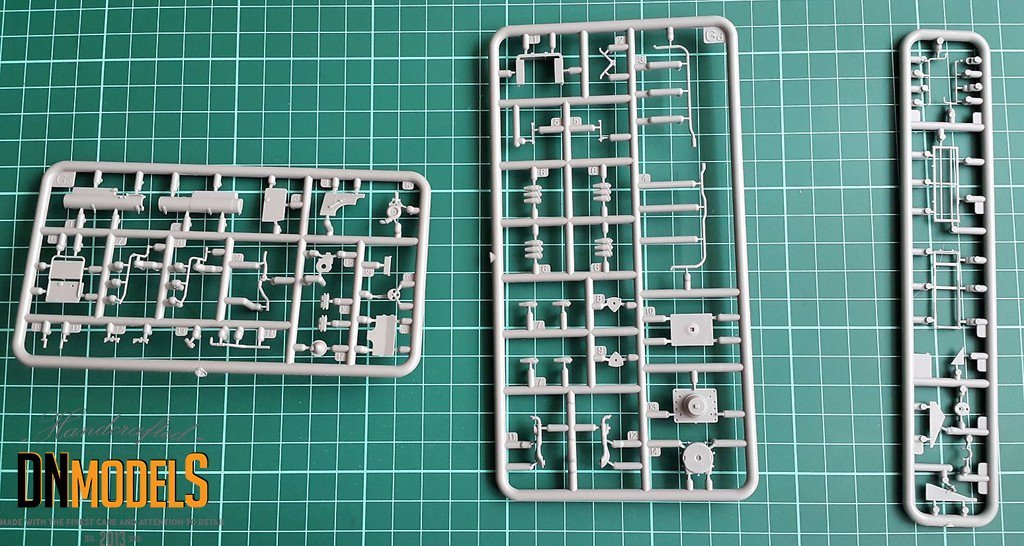 Not so high points are the decals and the marking options, but hey, you don’t get almost perfect kits every day!

So I must only recommend this kit. With 1200+ T-54-2 built, this is not so rare tank and has its place in the history. With this kit, which is definitely the best in line of T-54, this is a must for every Soviet armour fan. The price is right and it is suitable for mid- and up-level modelers.

Beginners will struggle, but that does not mean that some of the interior cannot be left aside. 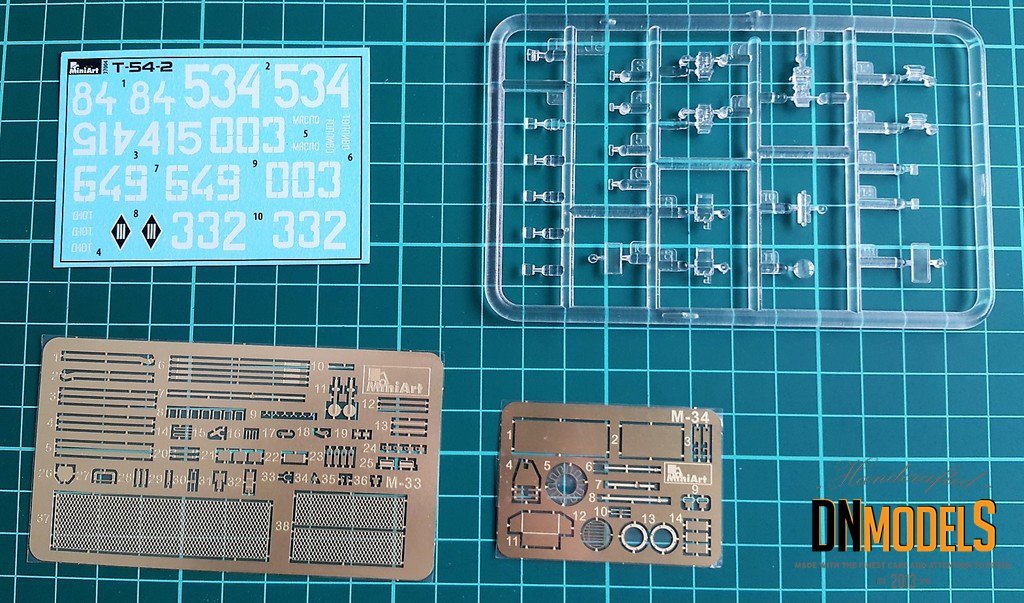 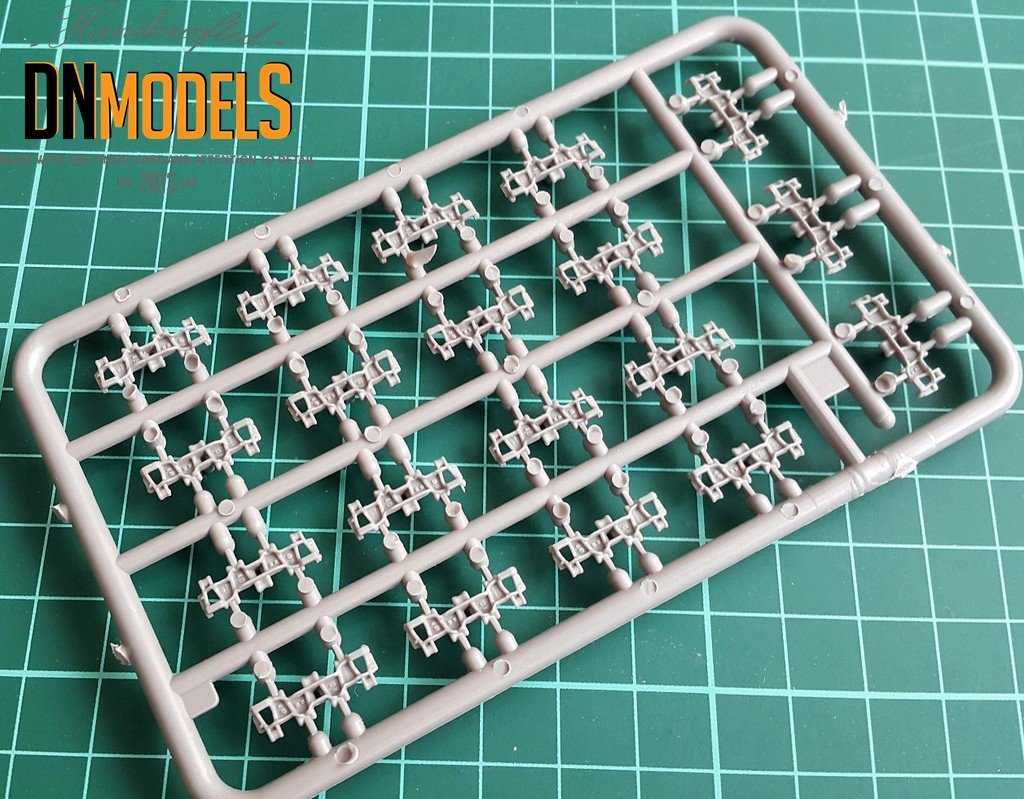