MiniArt projects are often oriented towards interesting and rare vehicles. Their latest – Su-122-54 – is just like that. A self-propelled howitzer that few have heard about. Don’t be fooled by the name: this isn’t the Su-122 from WWII that you all recognize. This is larger vehicle, with bigger gun and different platform.

Su-122-54 is based on T-54 tanks and is built on T-54 platform. If you find it hard to recognize, it is because the wheels spacing is altered and the gap that you see on T-54/55 series is moved backwards. The low silhouette and the big gun makes this Su-122-54 look intimidating and fierce war machine, however it never saw much action in its short career.

Boxart is typical for Interior kits from MiniArt – featuring beautiful artwork depicting a moving vehicle with what resembles to be some massive military exercise, typical for the Soviet Union armed forces during that period. S hare is crossing in front of the vehicle, just to spice up the picture and even though this isn’t an interior kit, the boxing is equal to one. 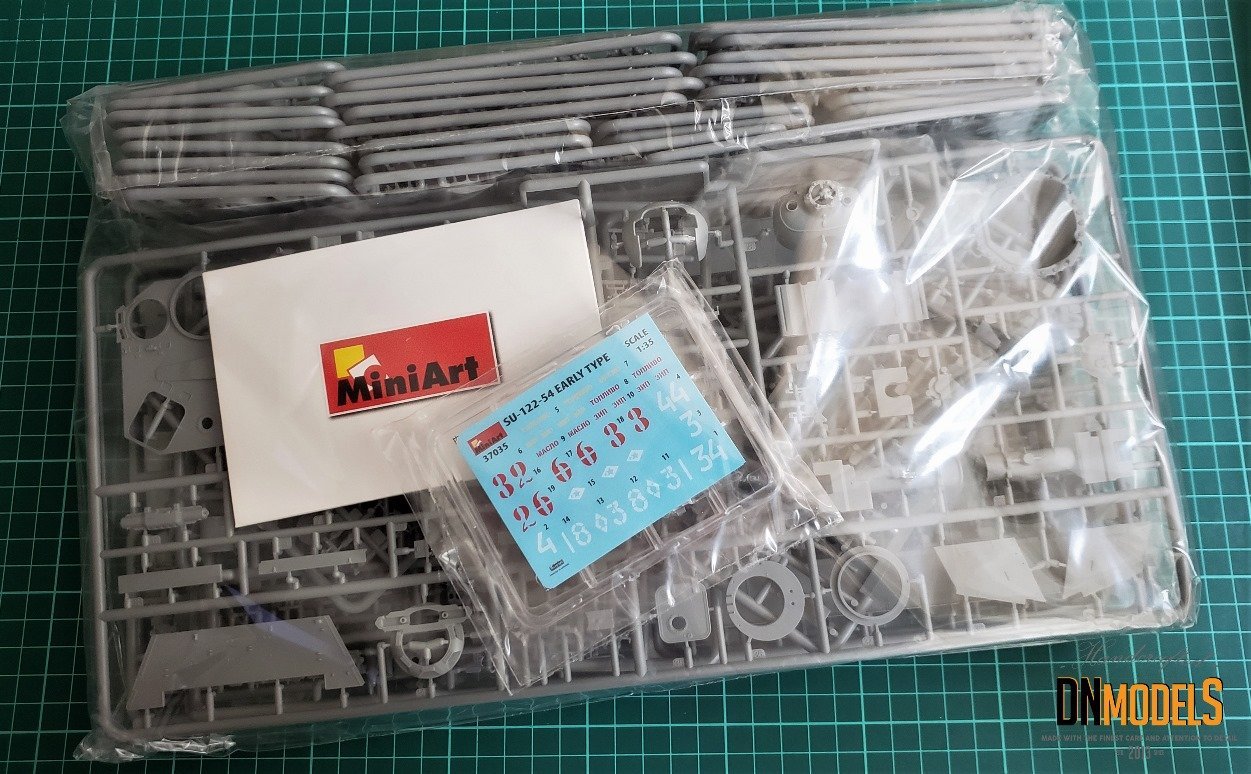 The difference, compared to other T-54/55 series from MiniArt is that it looks slightly thinner. And I mean interiored vehicles only here. I mention that because at first look you get a kit that seems like the interior series but it’s not. Not that this is a bad thing. If you ask me, just the contrary. It will speed up the build of this Su-122-54.

Despite the intimidating number of parts that MiniArt usually supply, the instructions are perfectly clear and understandable. They have outer pages that feature the color schemes and the sprue description and those are made from high quality glossy paper. The insides are not from glossy material nor feature colors, but the quality of everything else is kept. 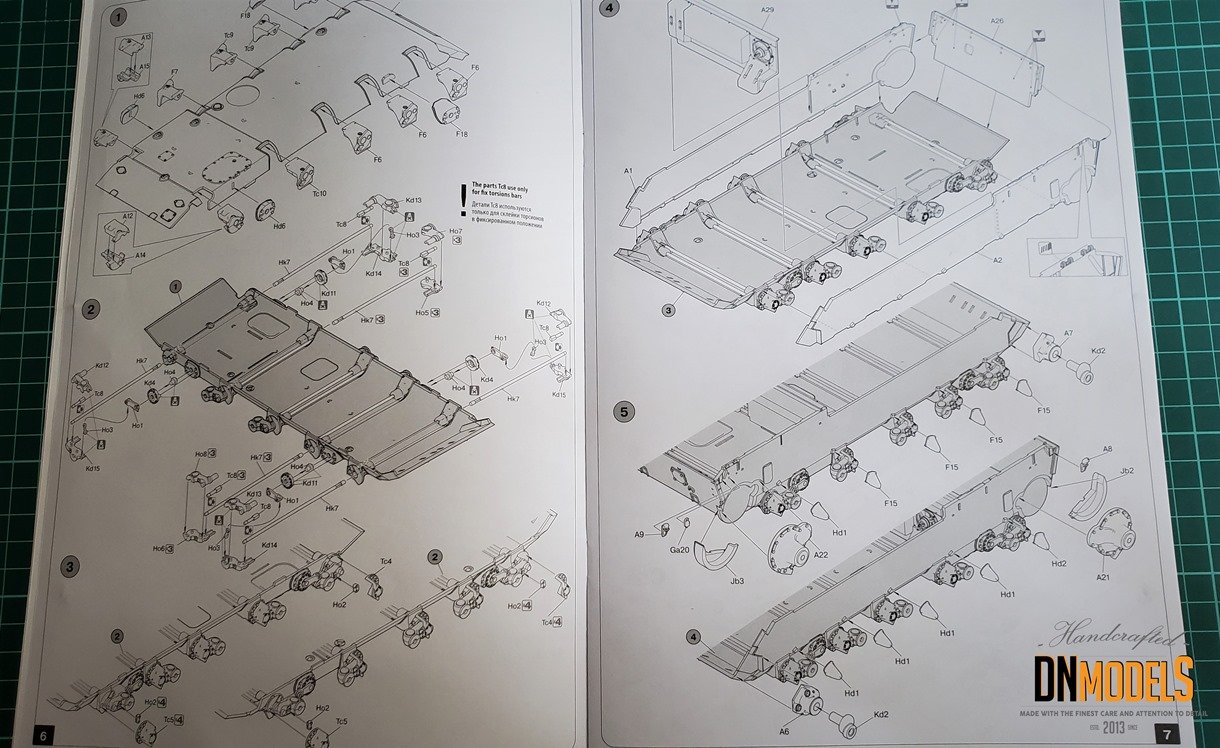 Once you get through a step and complete a portion of the kit, on the next one it appears in darker shade in general, so to keep the focus on the new elements that are supposed to be installed. That might not sound like much, but it eases the job significantly. And it is also a nice touch.

Each step of the build is clearly understandable, without much text, but not oversimplified either. That doesn’t make the kit easier to build, but it add to the relief a bit. One must know that this is far from what beginners would want to mess with. But that is MiniArt’s way after all. 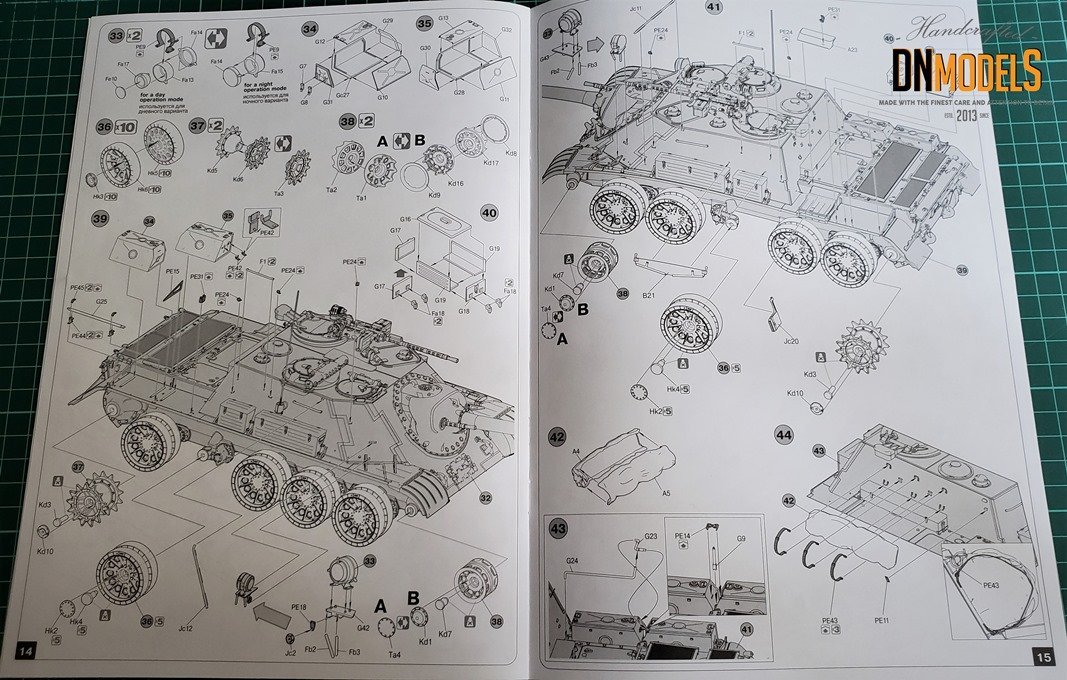 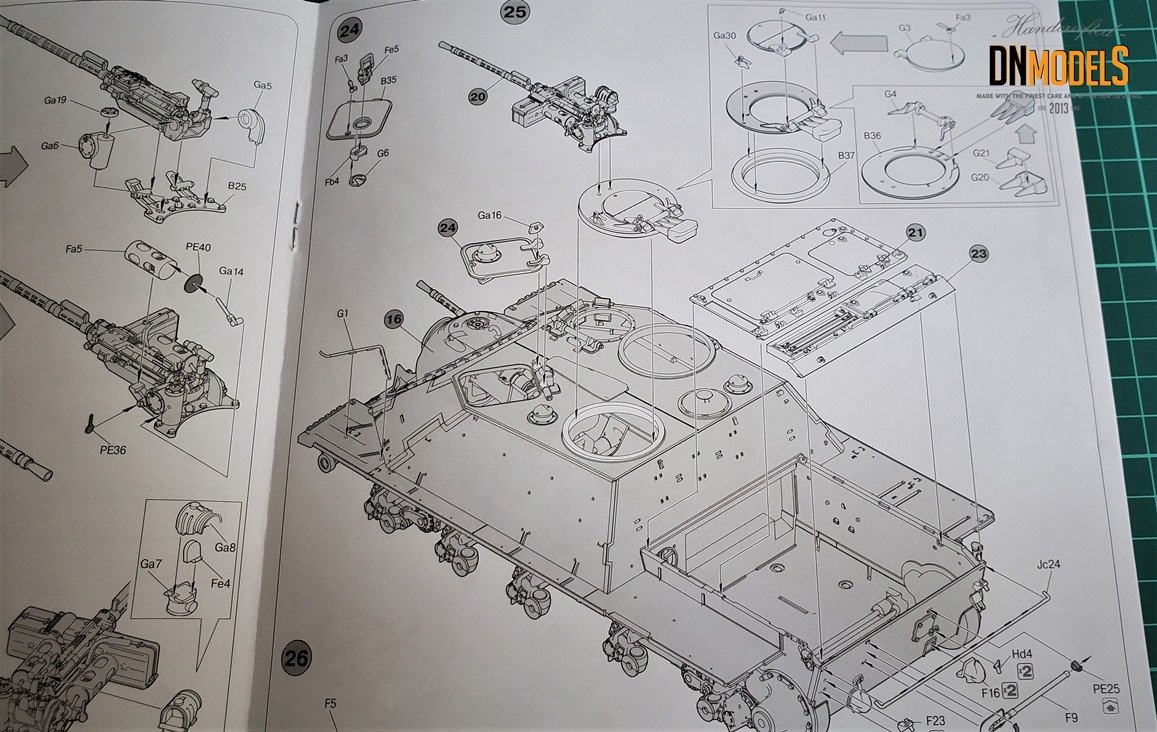 We have large number of parts, but considerably less than what we get with an interior kit. The suspension was given the proper attention, the exterior too, so everything is in order with the plastic. There is no compromises with anything and the sub-assemblies are as expected from MiniArt.

The box that I got came a bit smashed, but surprisingly, no parts were damaged on the inside. Everything is packed into one big envelope, so one might expect to see damages. But no. It was nice to see that everything was intact and in order. Nevermind that the envelope is crowded. It was OK. 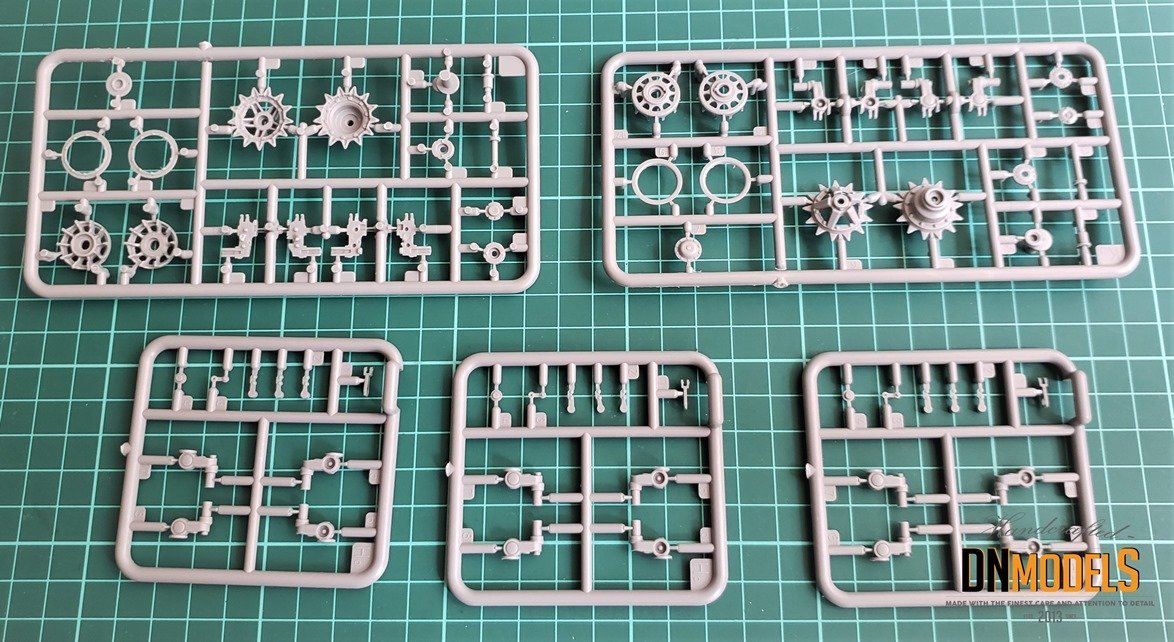 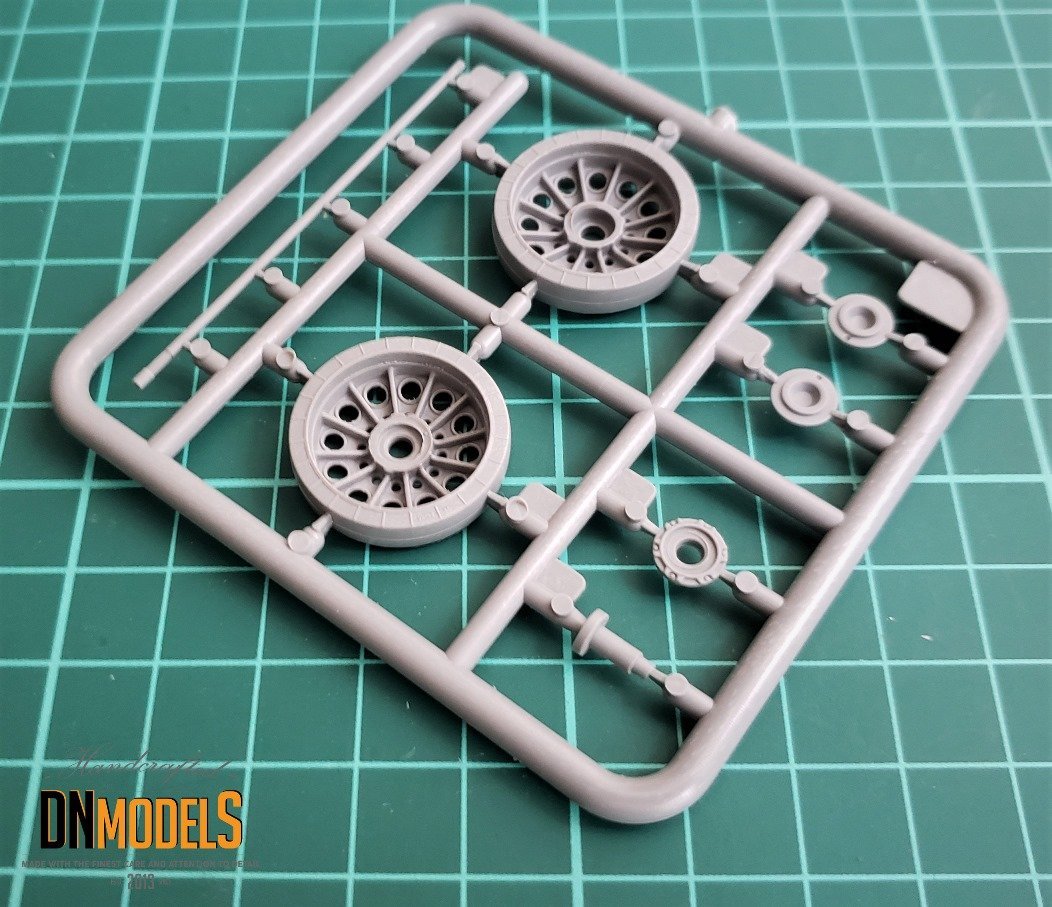 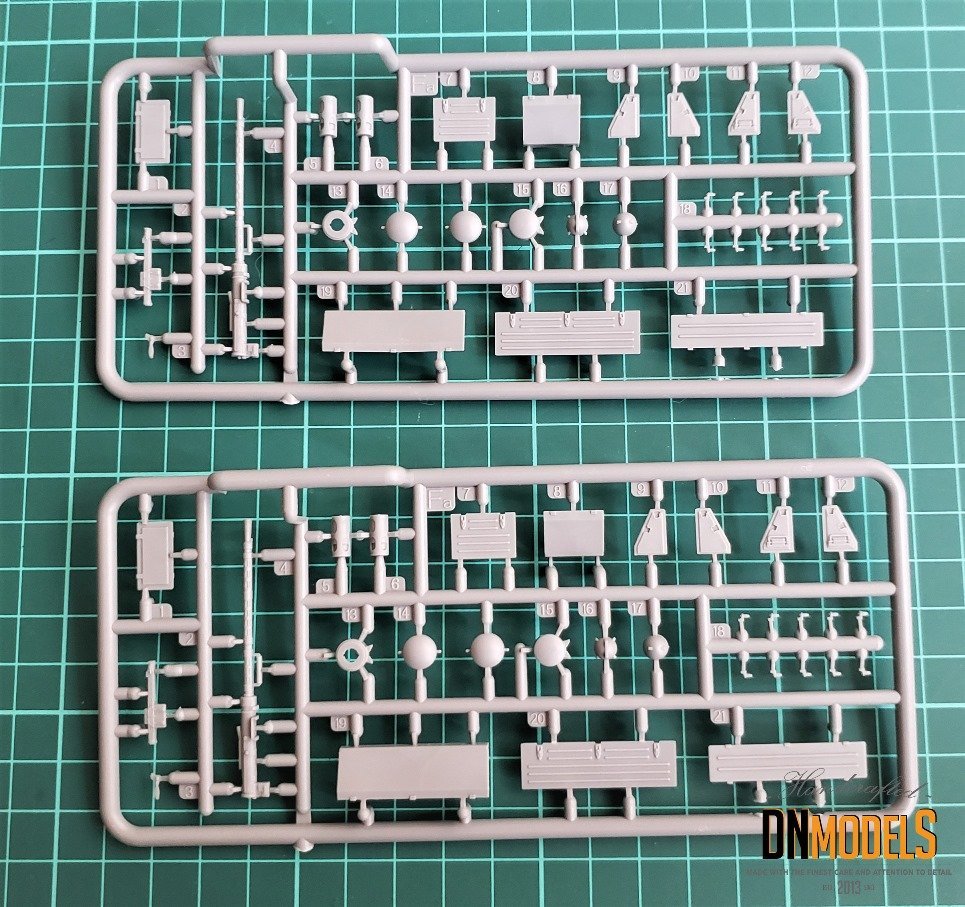 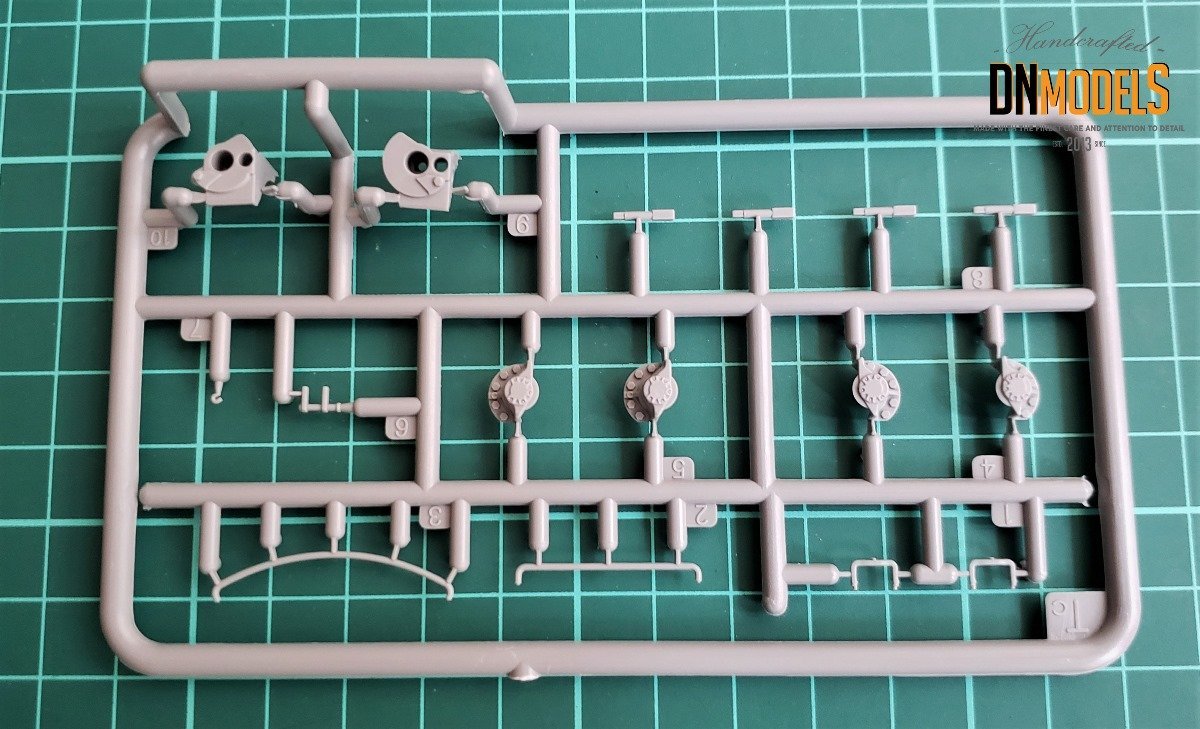 That speaks a lot about the new plastic material that MiniArt are using, which is flexible and doesn’t show the troubles that the companies were ill-famous about before. Even the thinnest parts can be bend /to a reasonable amount of course/ without cracking and working with it is now fun.

The abundance of sprues and elements is justified by the separate track links, sub-assemblies of the stowage boxes and suspension and exterior parts, which can satisfy even the most picky modelers in terms of kit quality. That makes the Ukrainian company very competitive and there is hardly any manufacturer as of this day, that can provide enough to compete in terms of detailing. Out of the box, the kit is brilliant. 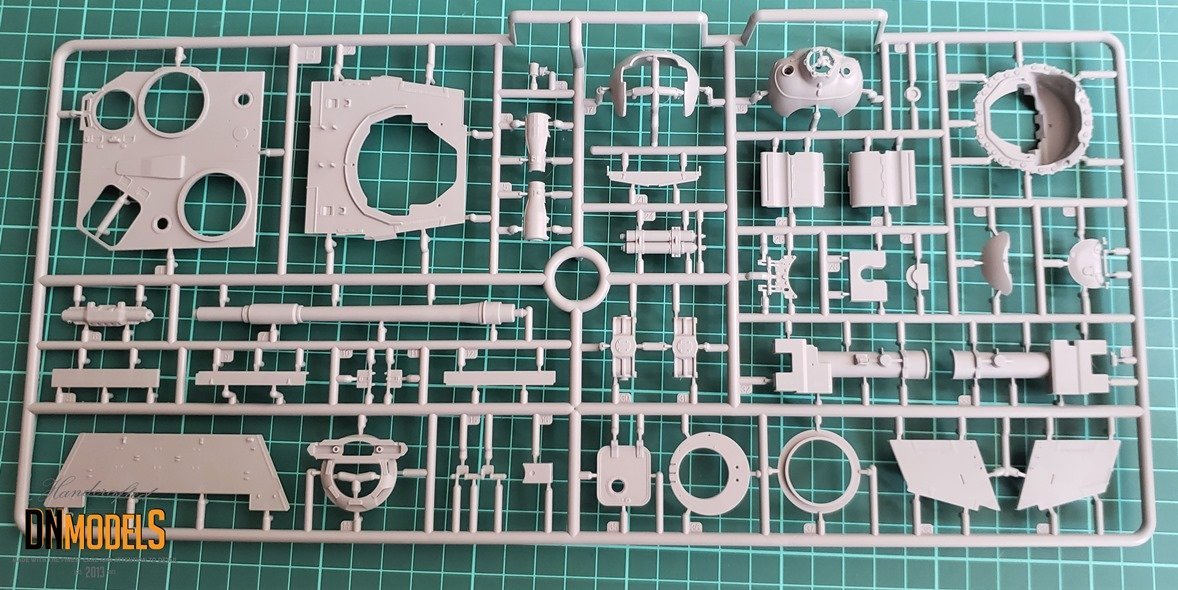 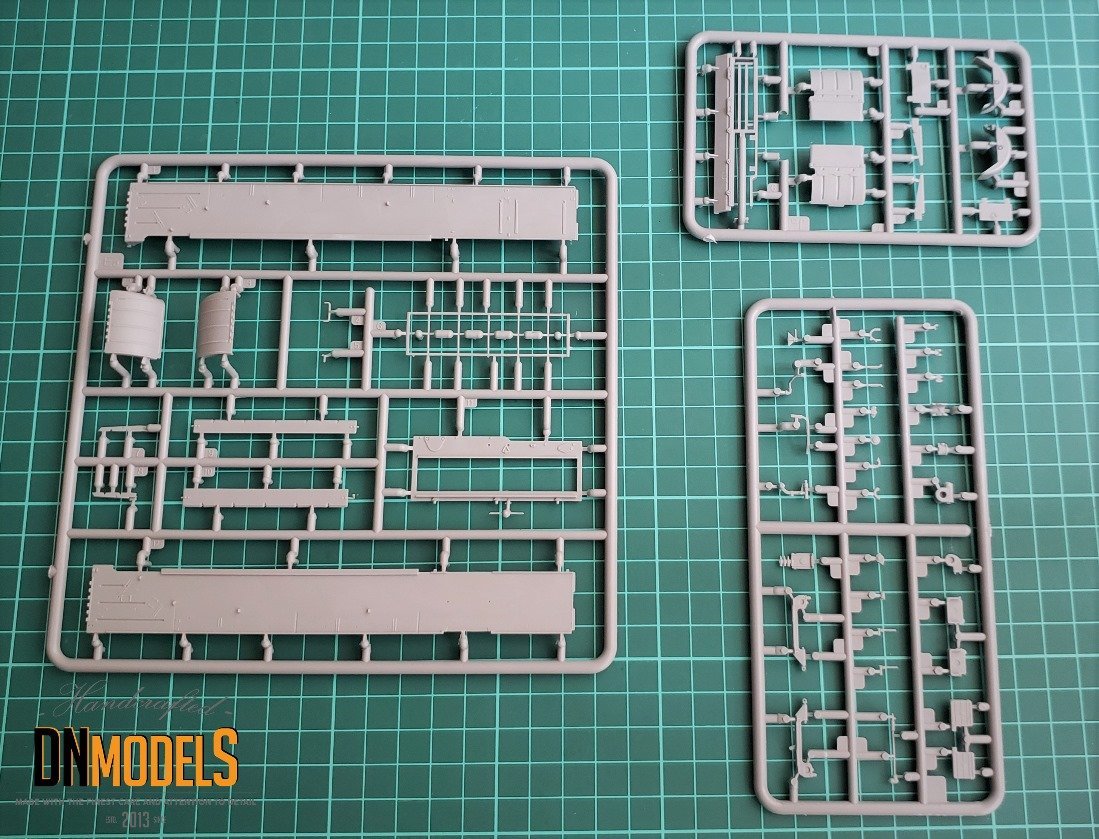 Decal sheet is relatively small. It features technical stencils in Russian and combination of numbers for the sides of the vehicle. Su-122-54 was used in 50s and 60s and lack of any specific insignia is self-explanatory. The carrier film is barely visible and the decals look thin. The sheet is product of Decograph, a company that MiniArt chose as a supplier for their decal range. 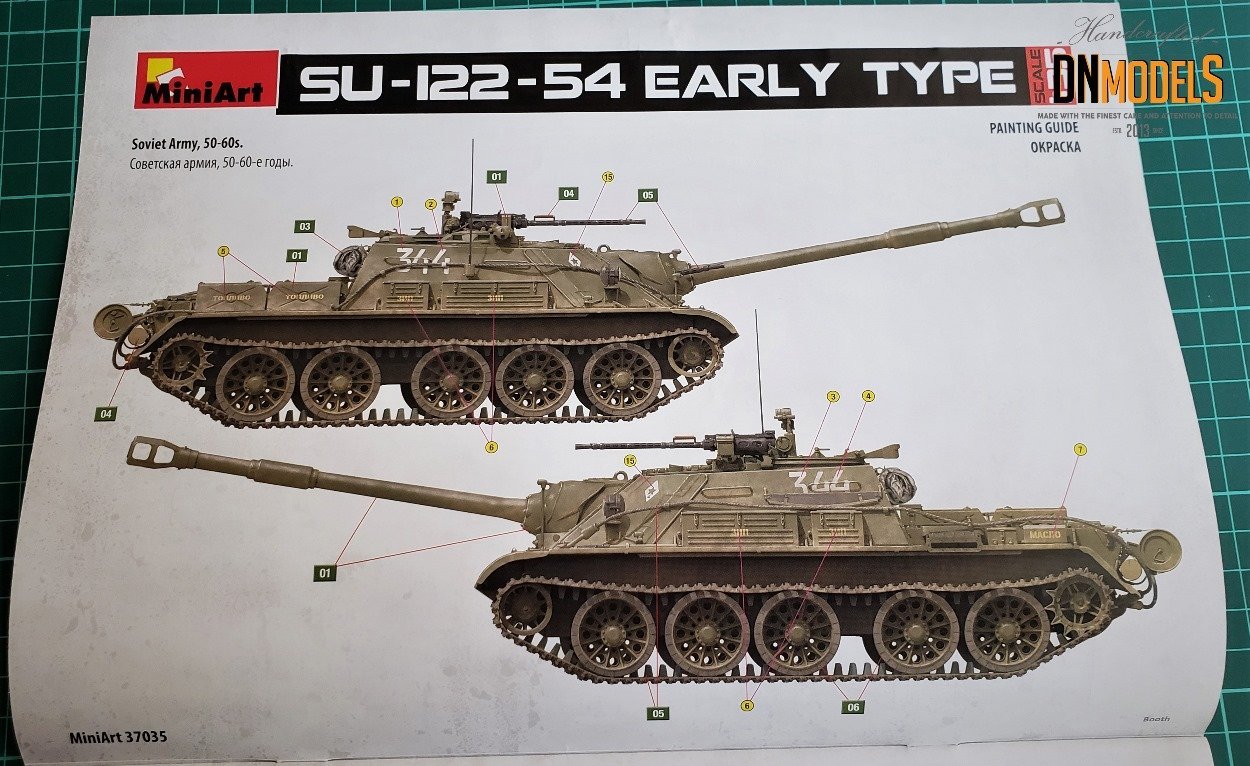 There are three options included in this kit, which explains the decal size and its contents. All the vehicles are Soviet Army and from the same era – 50s-60s of the 20th century. Two of the vehicles are painted in single-tone camouflage scheme. Khaki green, slightly paler than what we are used to see on Soviet tanks.

The third option is winter camouflage and it represents the most interesting of the three, since a lot can be done over the painting and the weathering of the vehicle. It is unlikely that those vehicles were painted in other than green, so winter camouflage is one thing that can improve the options included and MiniArt wisely used it. 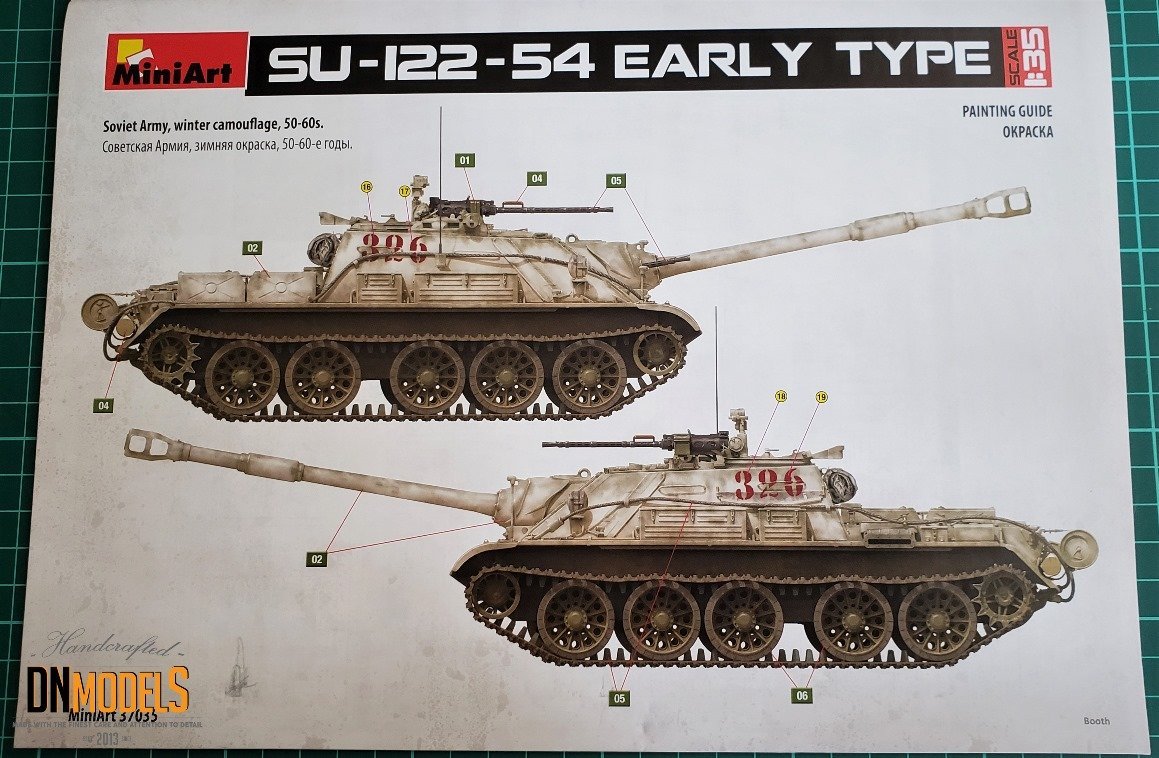 Of course, due to the lack of pictures and information about this vehicle, most of the realism cannot be confirmed and that gives the modeler a certain opportunity to alter the appearance to match one’s personal taste. After all, only 77 examples of the Su-122-54 were produced, thus playing with the final result is pretty much mandatory for any experience modeler. There is simply nothing else one can rely on building this piece. 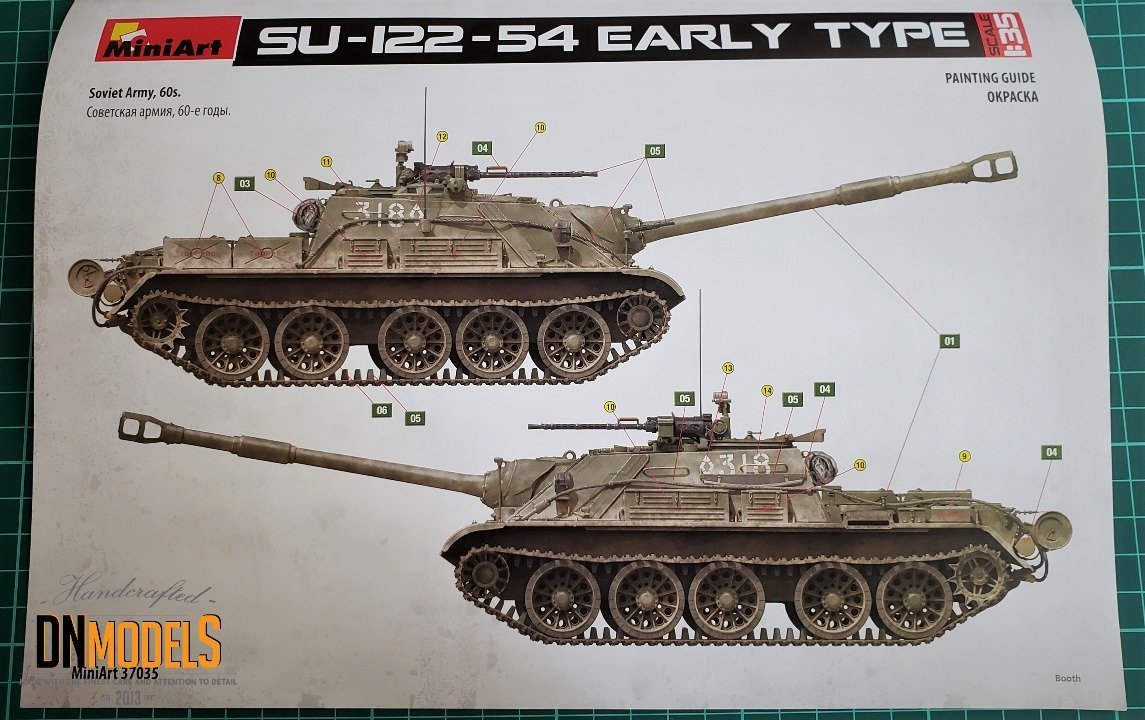 As expected, the photo-etch from MiniArt is extraordinary. It is flexible, thin and most importantly very nicely executed. Especially the meshes. They are fragile and one can hardly believe that the details can be so small. But somehow MiniArt managed to do it.

I would suggest to avoid sanding those, or at least if one insists, it should be done with care. I had my fair share of damaged meshes, mostly due to me being unprepared, so I am giving my two cents here to try and spare you the eventual trouble. 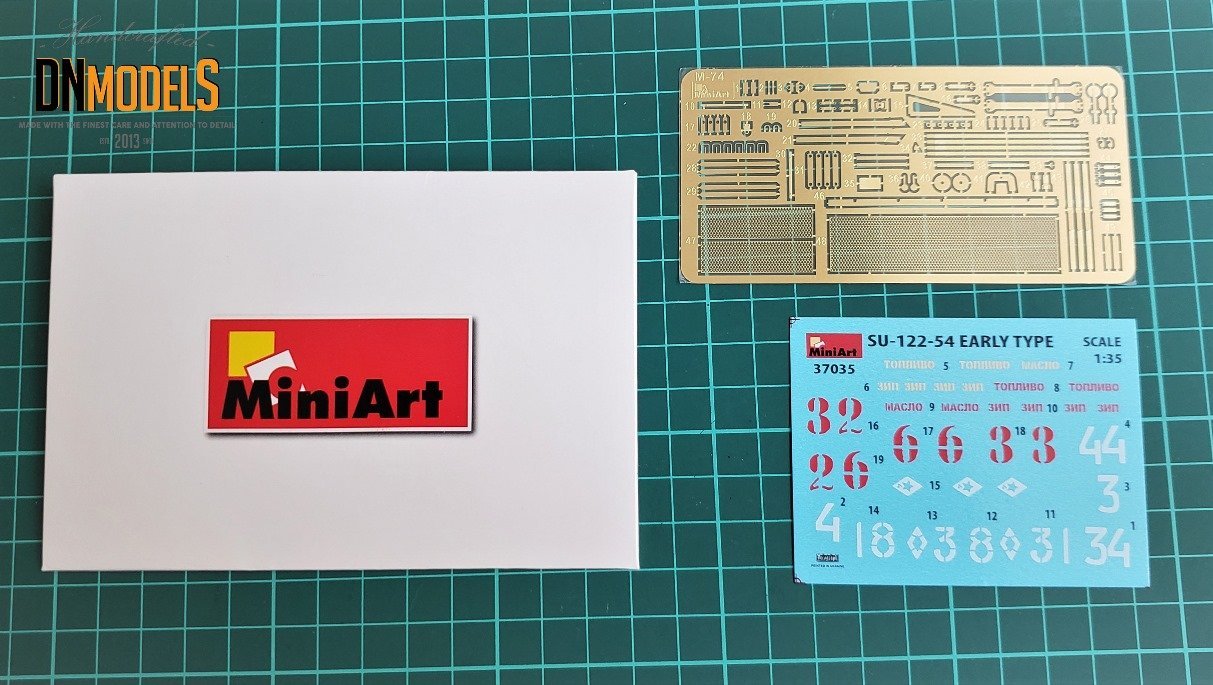 The rests are straps and some plates holding some of the plastic parts, which is nothing overly interesting, still spicing up the kit just about enough to satisfy the photo-etch fans out there. During the build, every once in a while you have to add PE parts here and there and in the end that adds to the fun of the process.

This vehicle is a total mystery to me. Probably to many others as well. The only reason I know about it is MiniArt and when I started researching I found some information shared through War Thunder fans, which obviously used it in the gameplay.

Not surprisingly, MiniArt came up with something rare and interesting yet again. The kit is accurate most likely, considering where MiniArt are located and where those 122-54s were used. Researching about it might be a problem, but if you are not that into historical accuracy, one can turn this kit into a brilliant model, knowing what you get OOTB.

Ukrainian model maker widens the T-54 family and this seems to be a long-lasting process, since so many were build and transformed in one way or another. This member of the family is hardly recognizable, yet interesting and even without interior – demanding. It bears all the qualities of a MiniArt kit and it is a must have for any Soviet armor fan.