StuG III is the most produced German Fighting Armored vehicle of the Second World War. It is not surprising, that this is one of the most looked for and built scale models too. Especially in 35th scale. Most of the StuGs available on the market today are good representations and cover most of the popular versions. If not covered, those versions are doable with a little aftermarket help. Mostly Dragon Models and Tamiya dominate that market, although recently, Bronco entered that game too.

MiniArt are about to say something on that subject too. Being a company that focuses on interesting and rare options of famous vehicles, the Ukrainian model maker surprised us with a pre-production series of StuG III: 0-series. Only five of these were vehicles ever produced, if the sources I’ve read are correct. They were used primarily for training, but some of them were eventually sent to the front at some point.

The main difference between those and the first production StuGs are the suspension and the wheels, which are 8 per side, instead of 6, standard for the StuG IIIs of the production series. The other thing that is tempting here is that MiniArt already have several Panzer III versions with that suspension and the kits are very well accepted, which promises a good StuG option. The pre-production Panzers available from the Ukrainian manufacturer are beautiful although demanding kits, and we have nothing short of that to expect with this StuG here too. 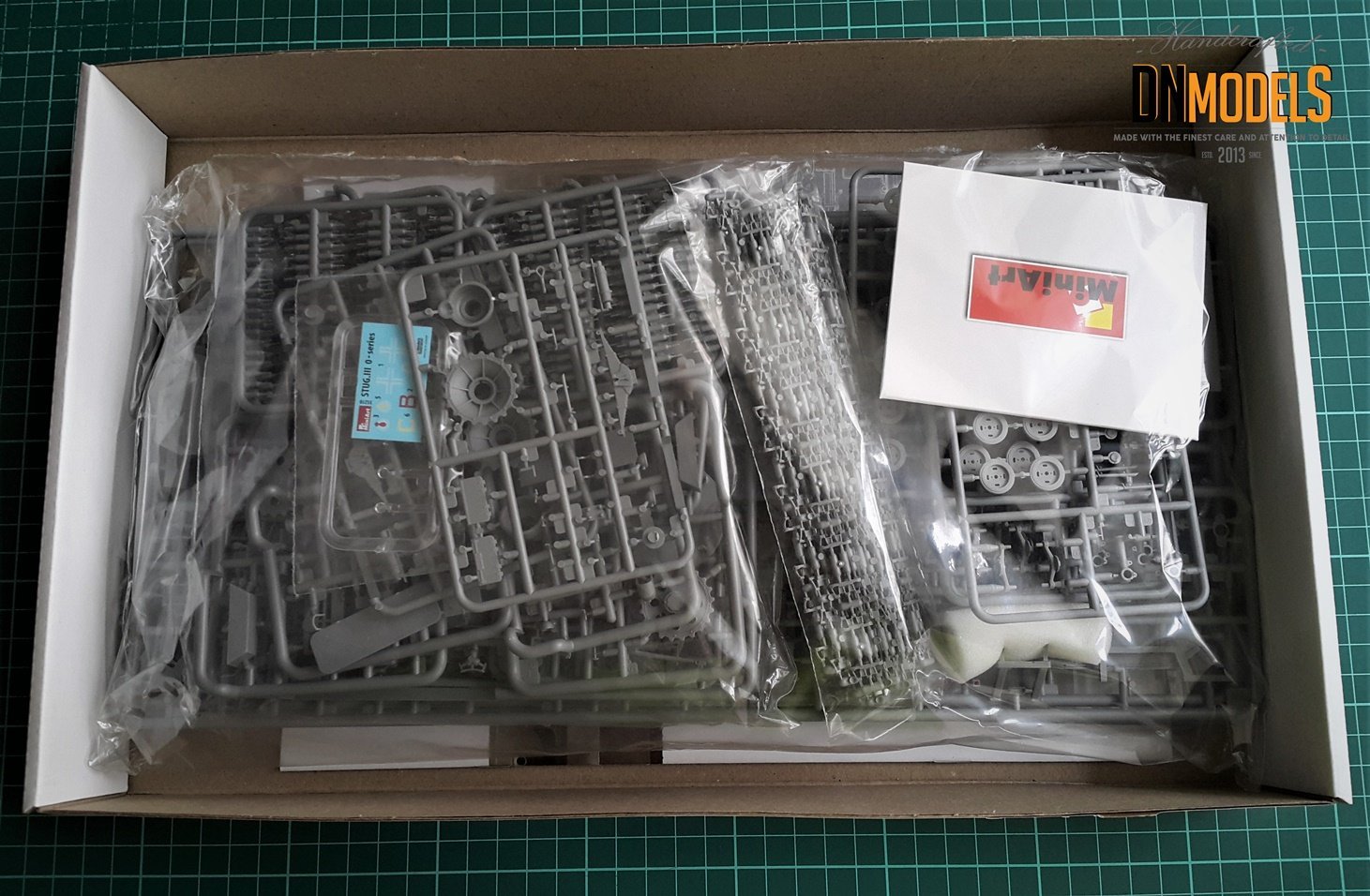 The box, compared to the size of the T-54 series from MiniArt seems little thin and skinny. That shouldn’t fool you though. StuG is little smaller as a vehicle and the lack of long barrel and huge wheels somehow adds to the size chosen from the Ukrainian model maker.

The boxart is beautiful, showing a stationary StuG III in a forest, hinting that this vehicle wasn’t used that much in its service history. You’ve seen other manufacturers boxes I presume. All that you can see on them is action. Not here. The colors are rather dark, but even with that the StuG’s grey silhouette is depicted to draw attention. It looks big, although in reality this isn’t the case. It bears specific presence and is one of the nicest MiniArt boxarts out there in my opinion. 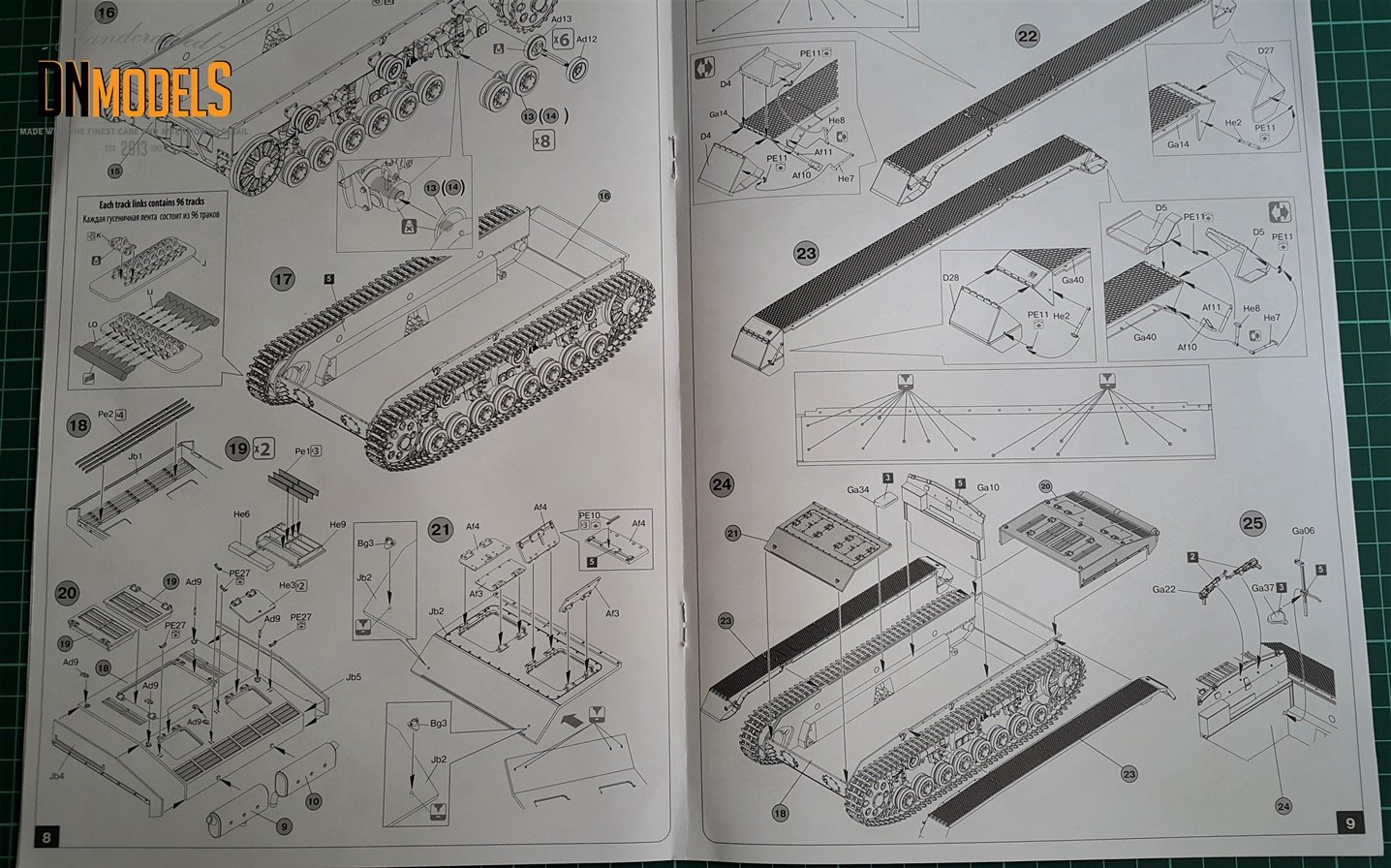 Are sharp and clearly depicted. A special attention is devoted to the suspension of the StuG. As with initial series Panzer III from MiniArt, that is the main difference between pre-production and standard-production vehicles. A decent number of parts is included here, plus the fact that the tracks are separate links, pretty much like Modelkasten set, without the price tag of course.

There are some interior elements but it isn’t full interior set. However, the sheets demand your full attention and I trust that this sheet, however clearly presented will be still a challenge for novice modeler.

Decent amount of space in the box is taken from the sprues that holds the tracks and their pins. They are beautifully executed, eliminating the need of aftermarket tracks which does two things. First is – saves a lot of money, considering Friul and Modelcasten prices, and second – extend the time to be spend building this kit. They can be great add-on but it comes at a price and that is time and patience from the builder’s perspective.

Rest of the sprues are standard for MiniArt as quality and a little less as quantity. Latter one is very good, since tracks won’t be a hassle as they are with the T-series of MiniArt. There, you have so much to build on the vehicle itself, that the tracks are your last concern and they might come a bit too much for some. 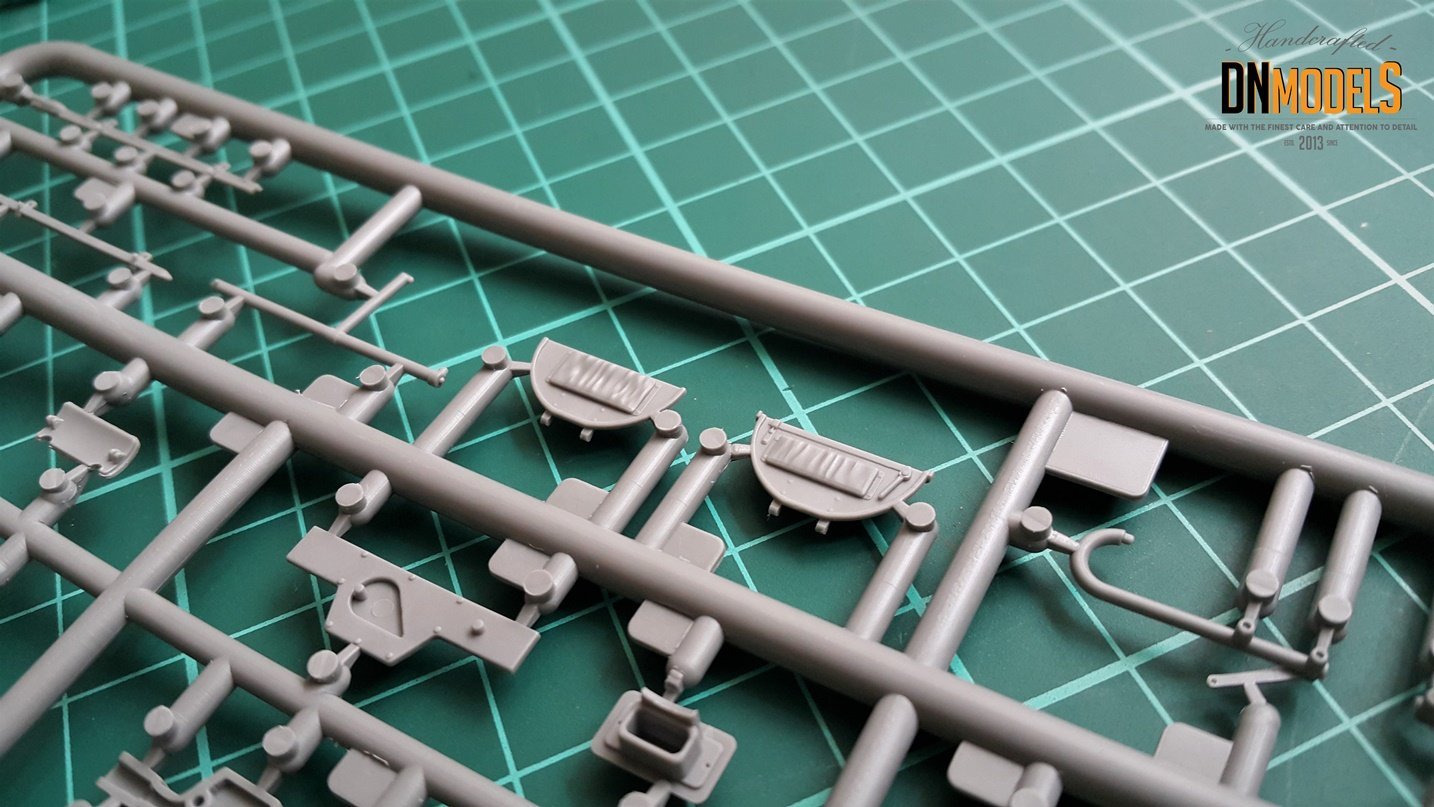 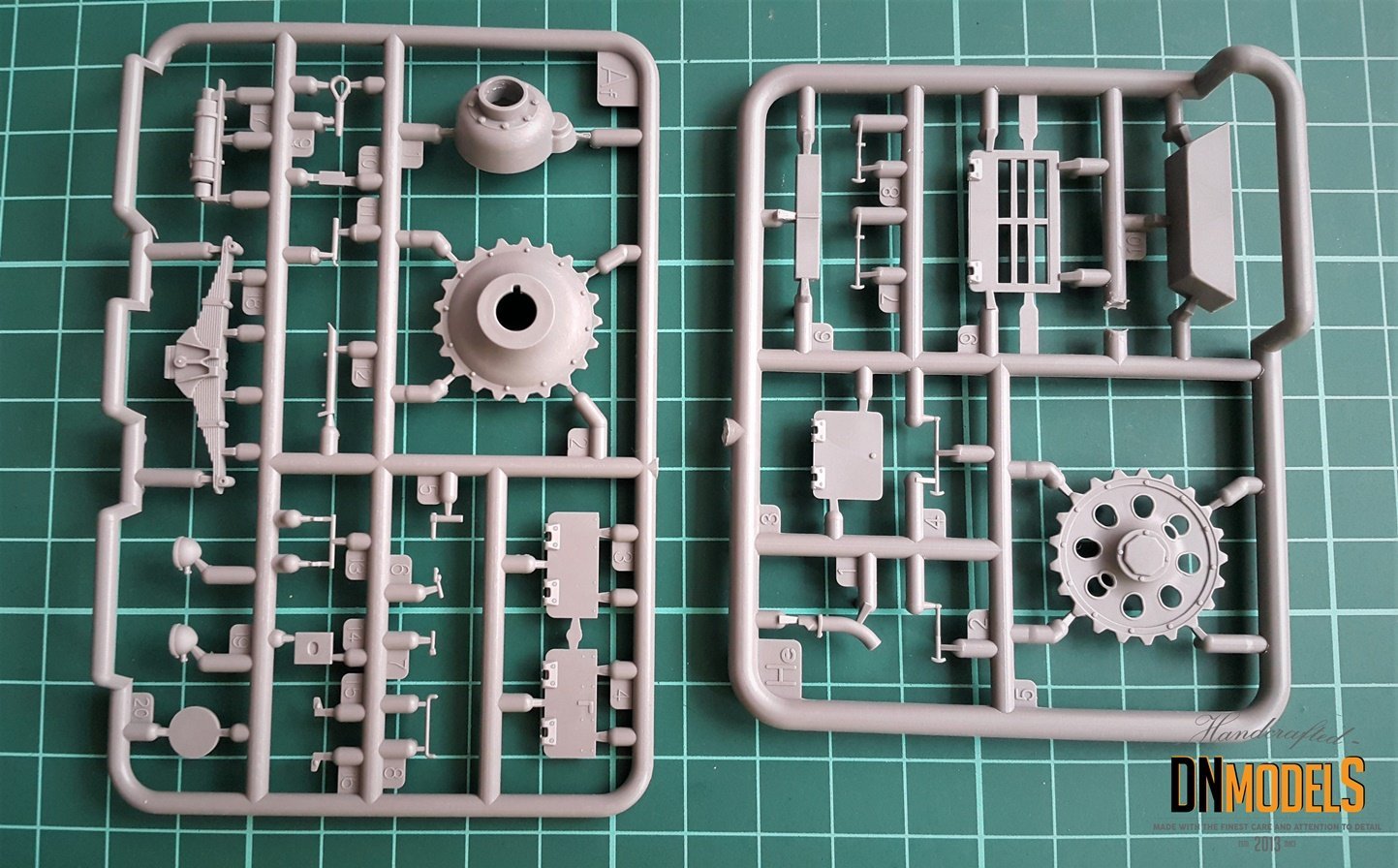 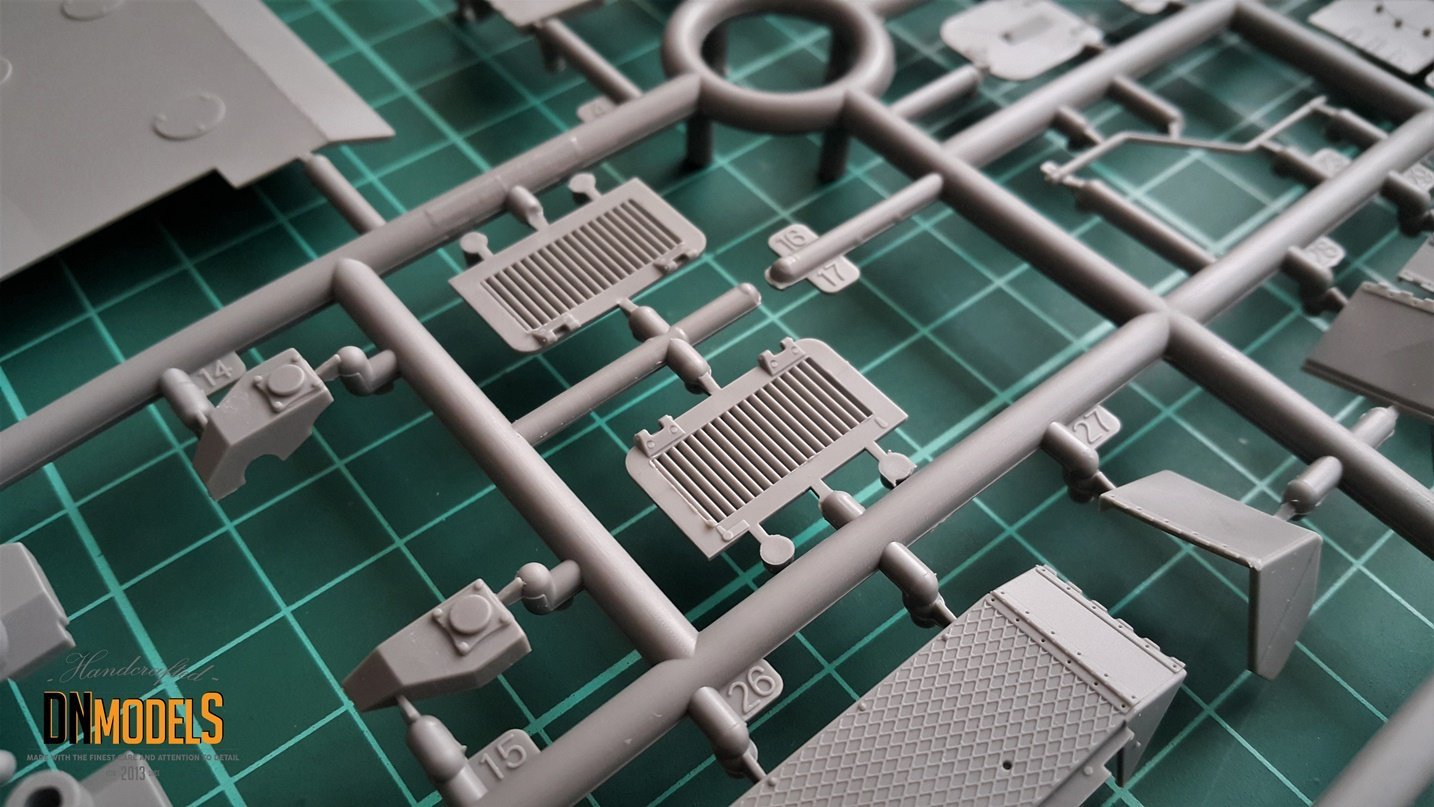 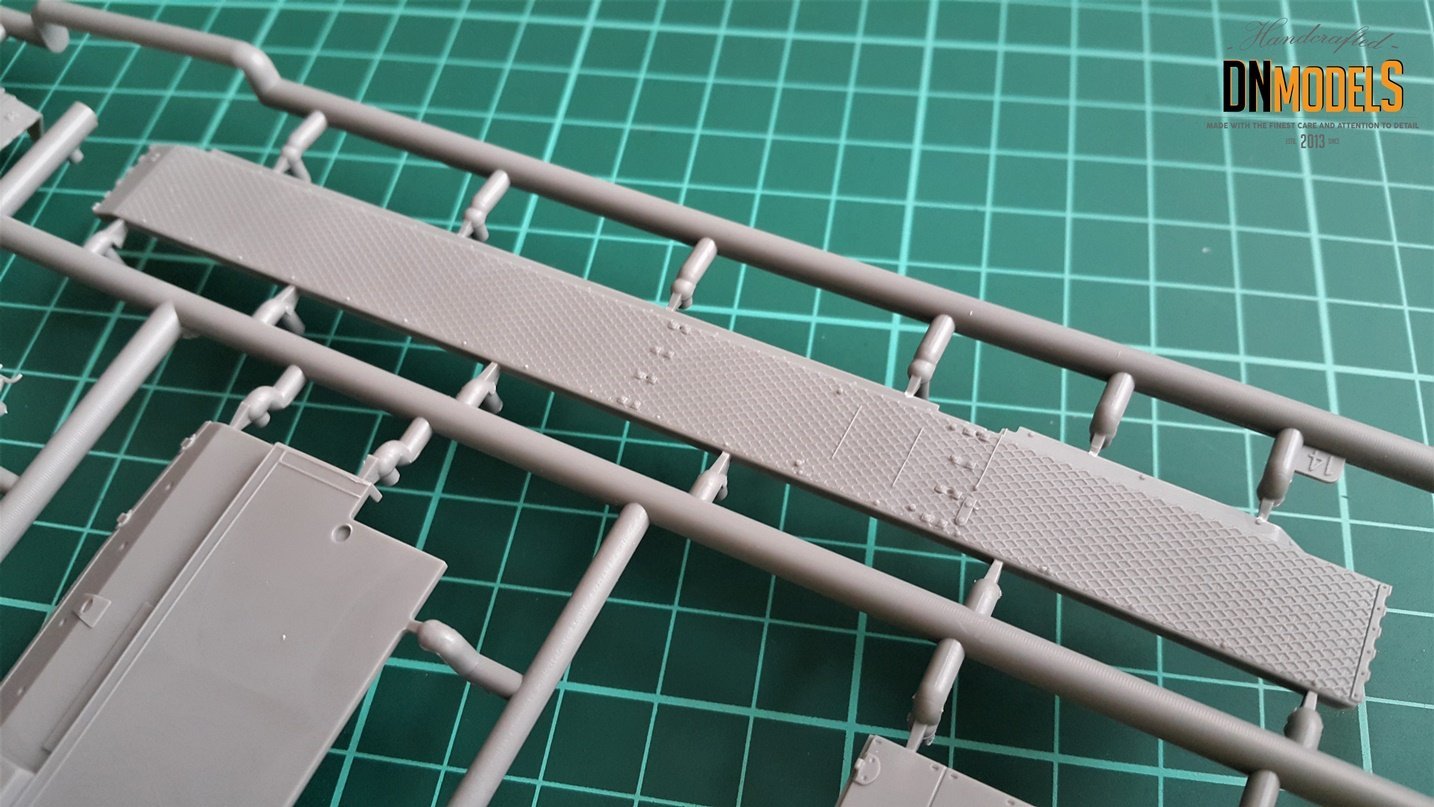 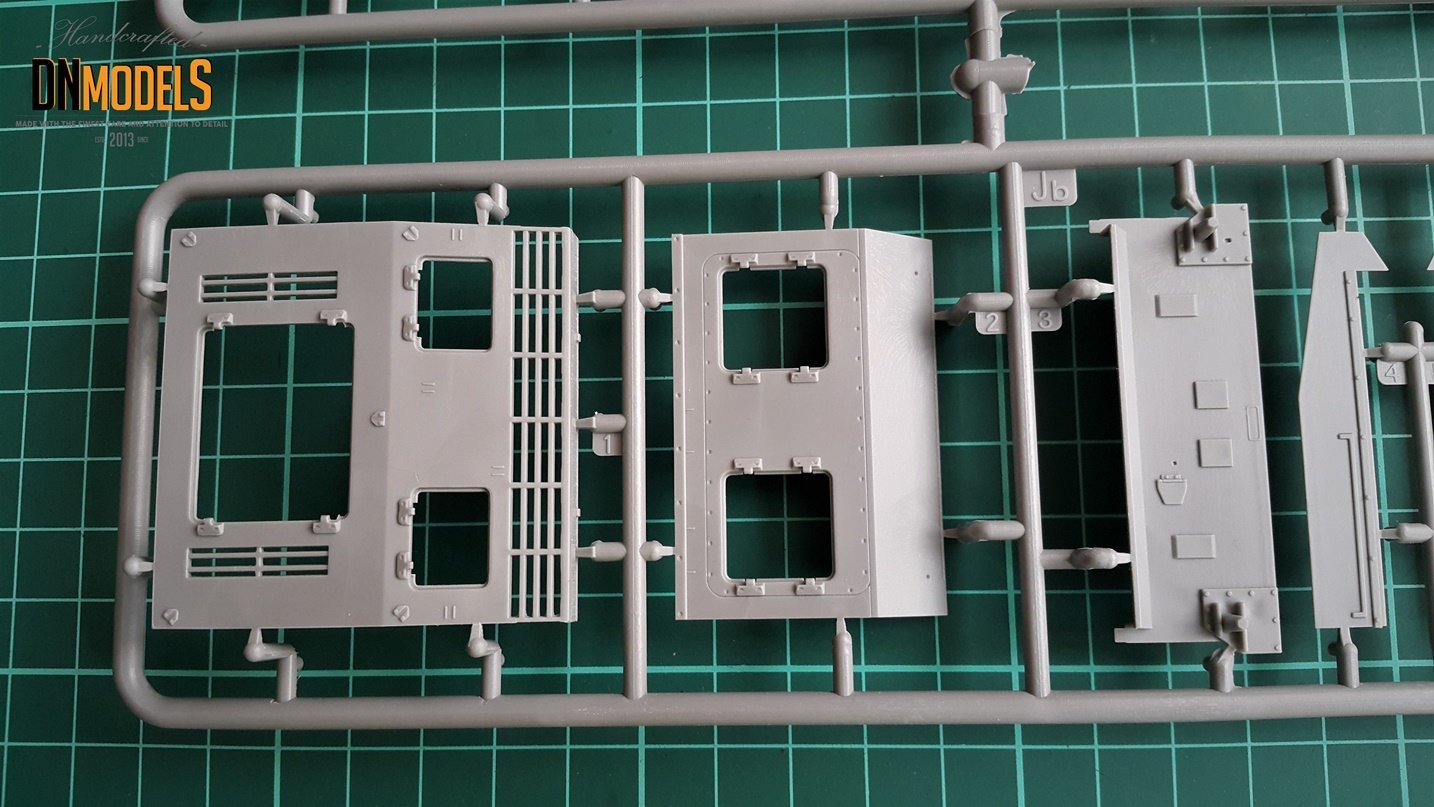 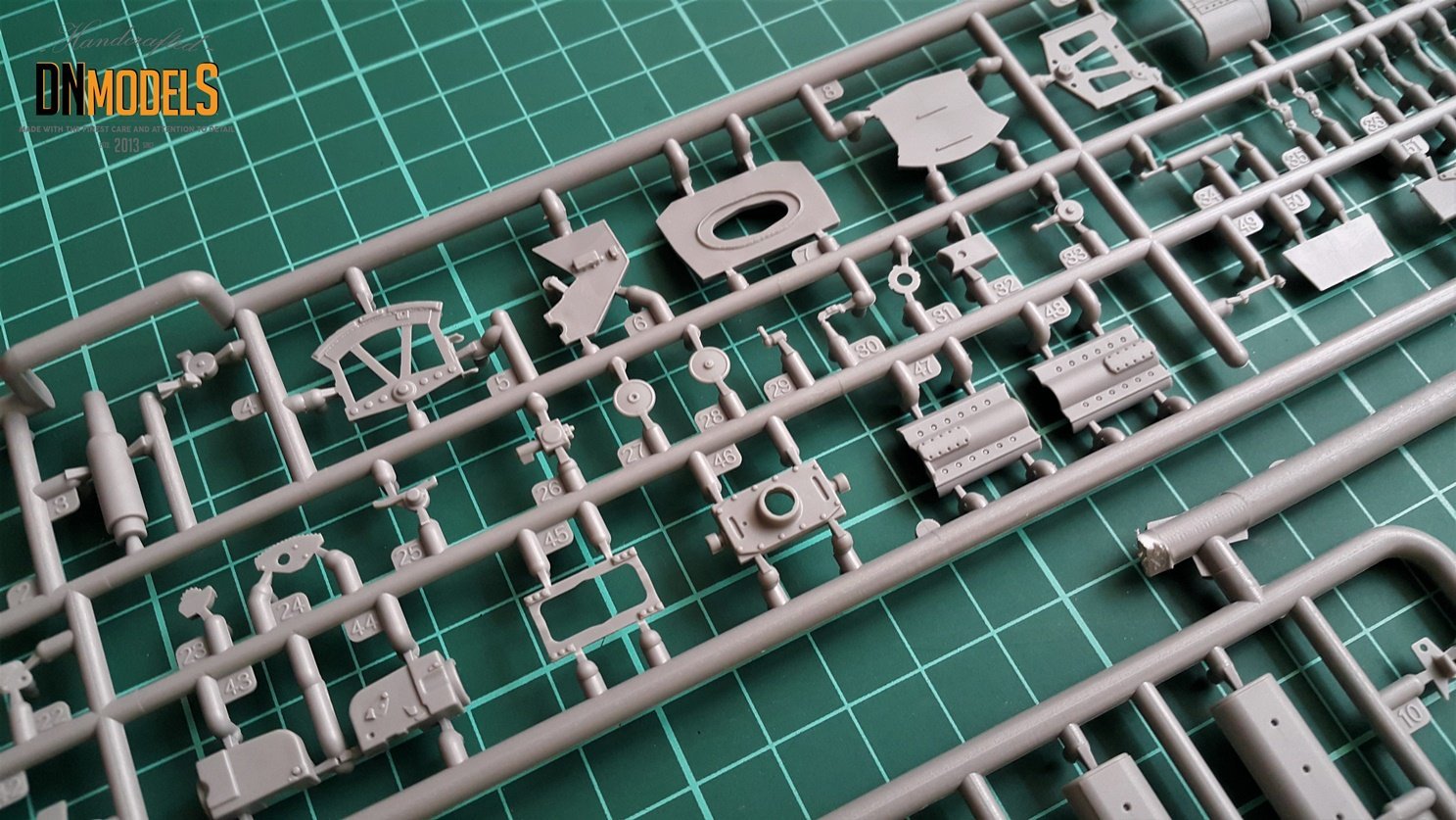 Detail is at a great level, better than any StuG currently on the market. Fine parts, small and intricate elements are what define the sprues, except for the hull elements. Suspension was given a fair amount of attention, including sufficient number of parts too.

Most importantly, the material that the sprue are made of is high-quality plastic, flexible and allowing for easy work. Problems with cracking and breaking parts is avoided, making the small and numerous parts acceptable burden and even a pleasant experience for many. 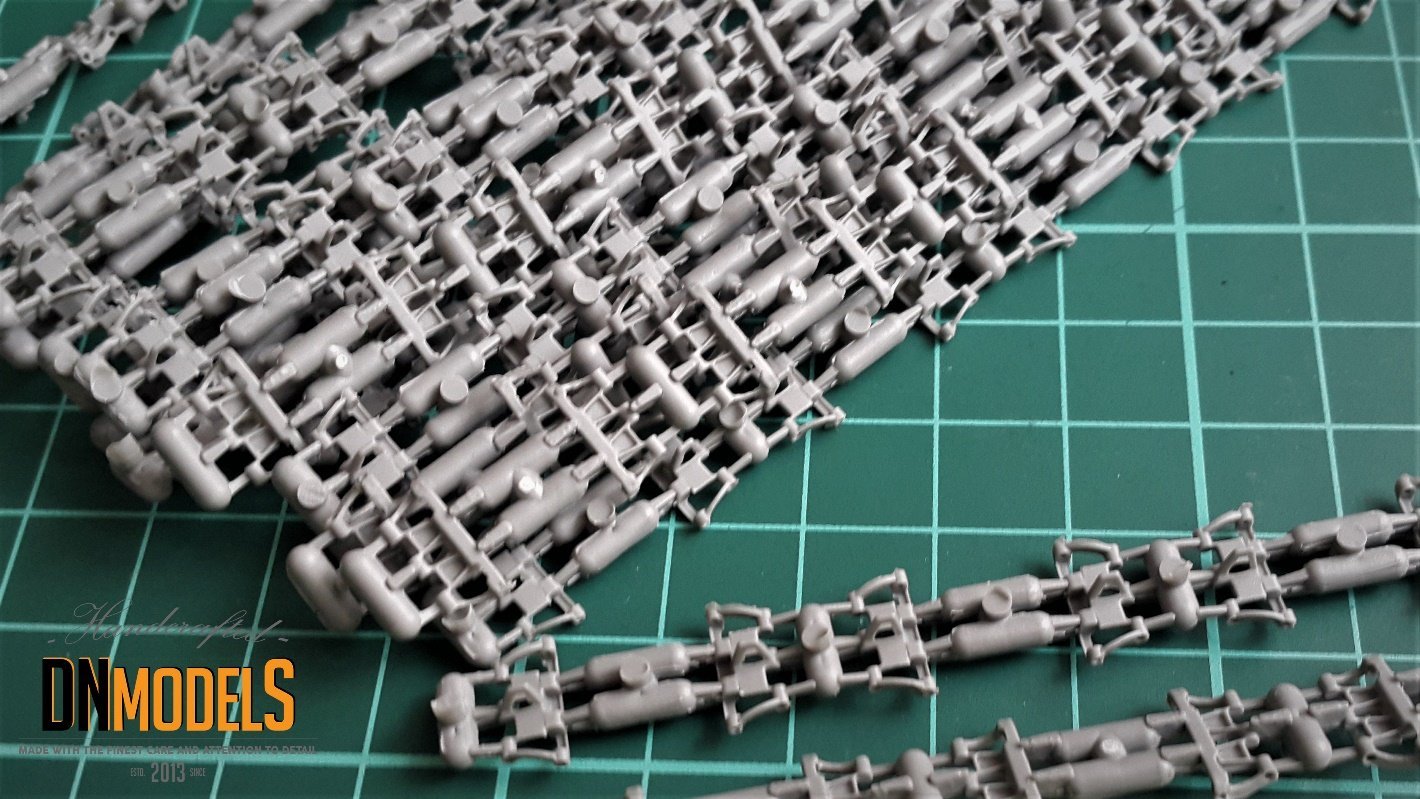 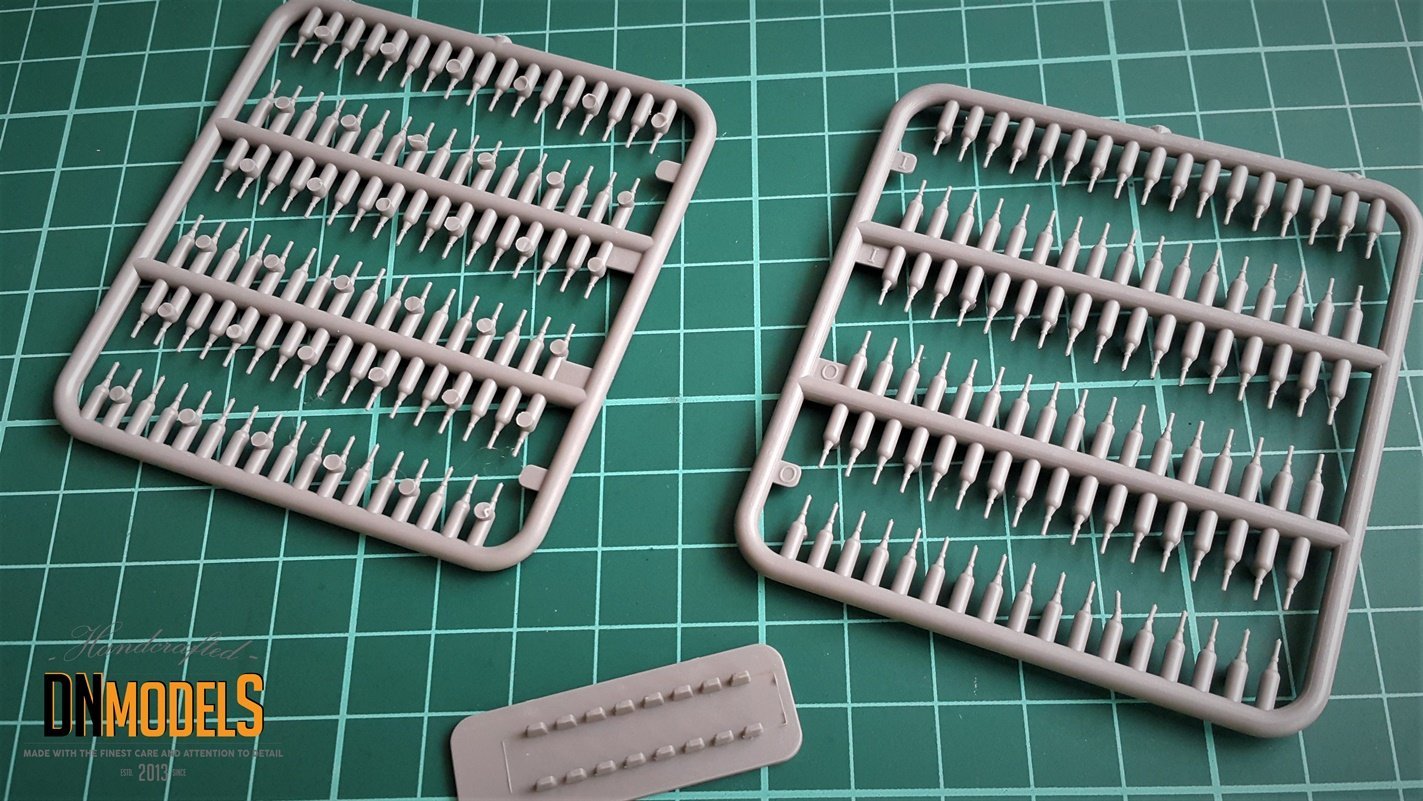 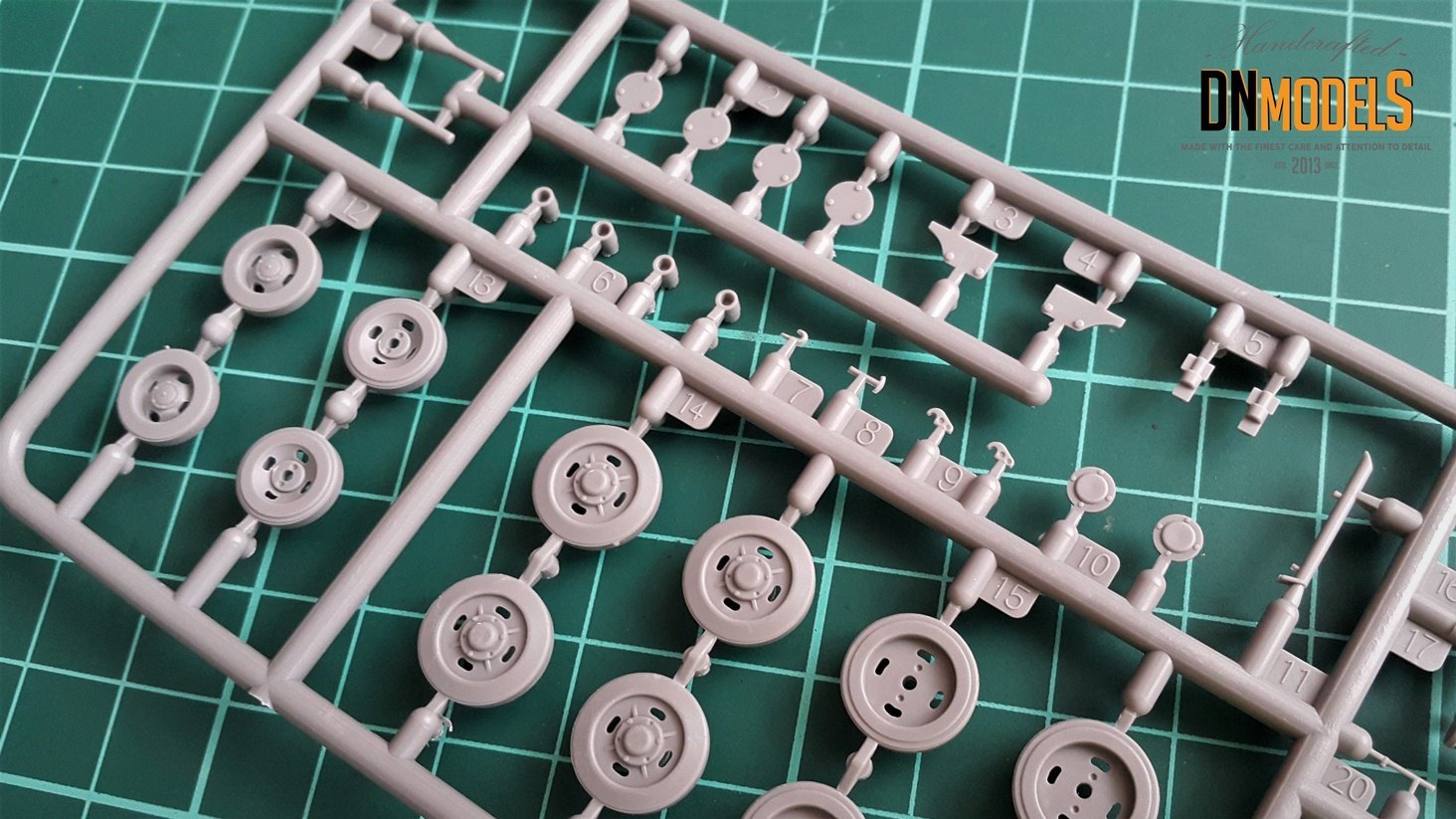 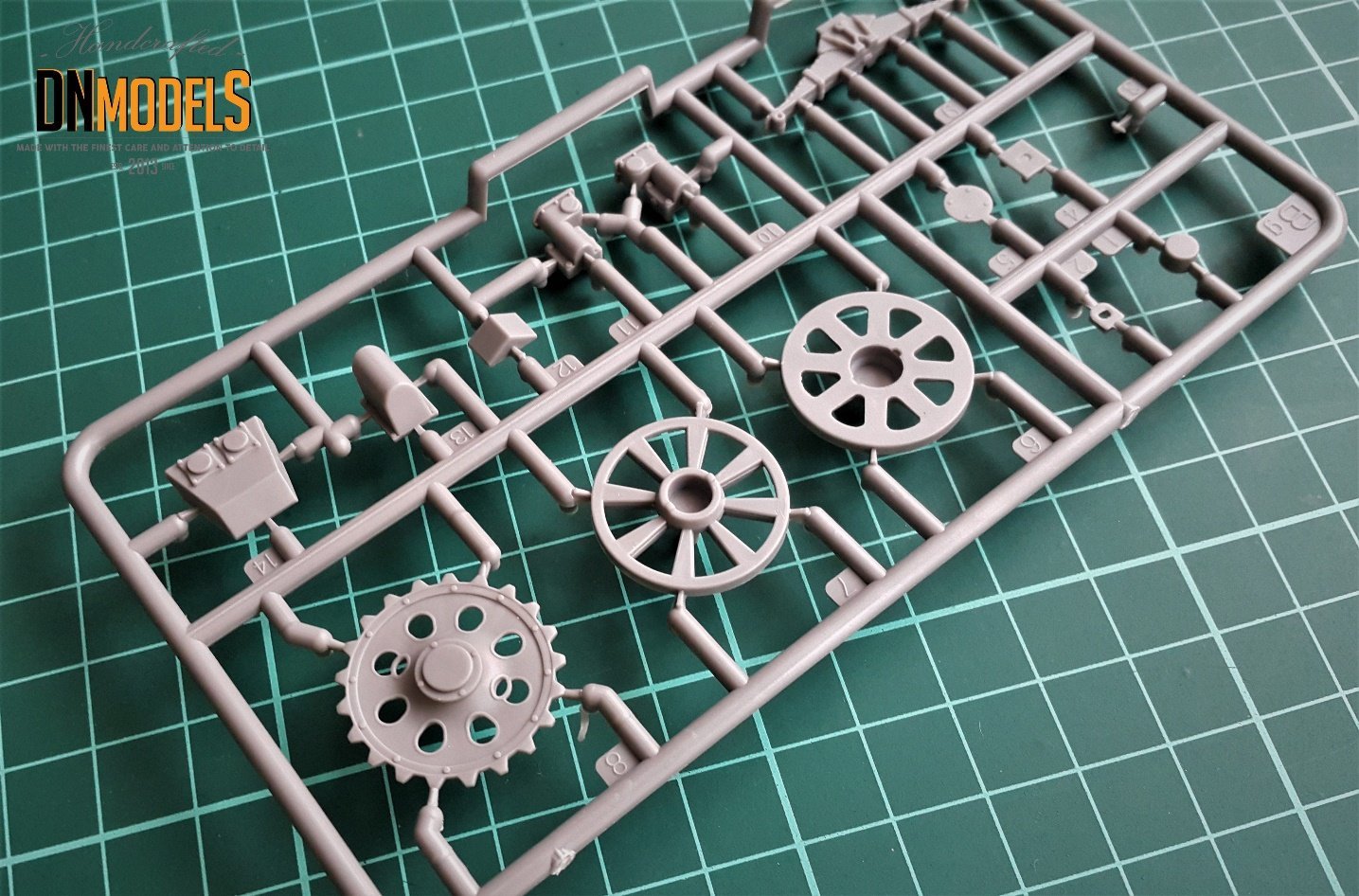 Decal sheet is small and practically features 3 letters, two crosses and two symbols. Understandably, considering the limited run of the 0-Series StuG III and the fact that Germans were not that into huge markings of their military vehicles. 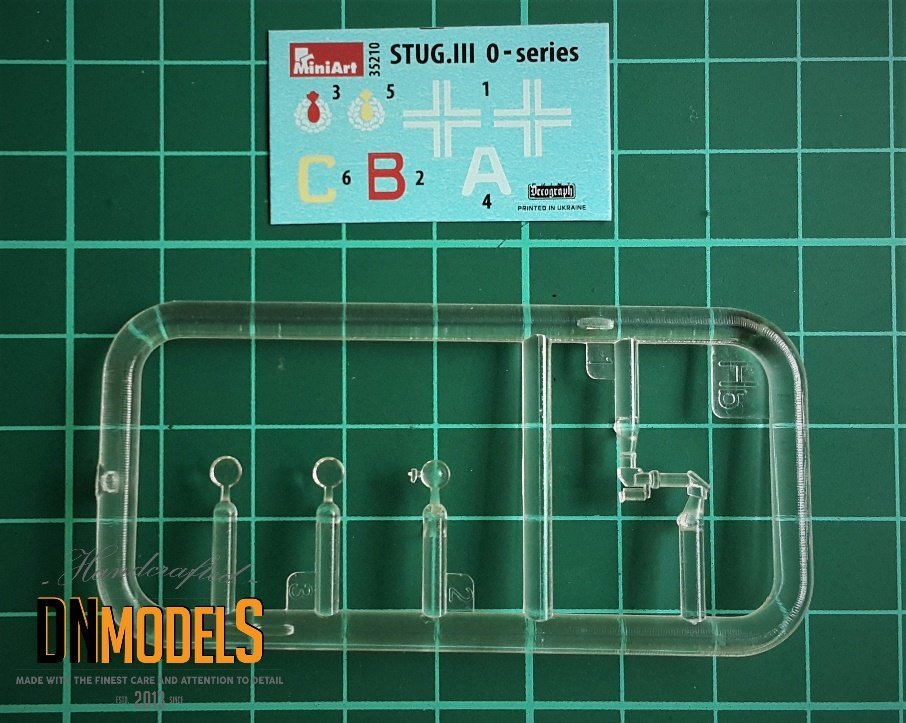 The Photo-etch on the other hand speaks serious business. There are not many big items from PE on the Miniart’s StuG, but there are plenty small ones. Brackets, handles and light covers, all of which made from very thin and flexible material, specific for MiniArt.

Those who hasn’t dealt with MiniArt’s photo-etch should be aware, that sanding should be done with care. The PE sheet is so thin, that damages are easily done. That is the price of perfection of course. 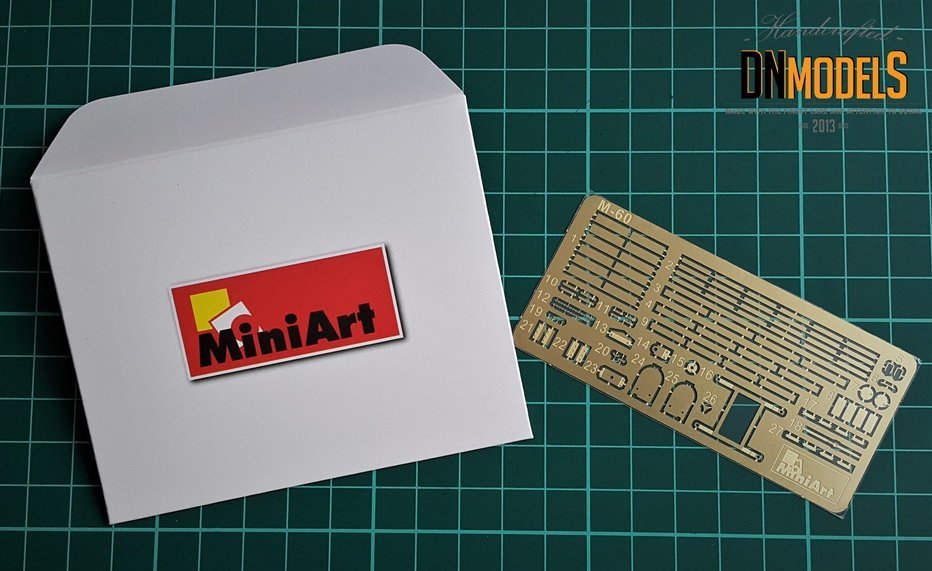 Dark grey can summarize it all. But not so fast. There are three versions, equally looking, but different in terms of decals. They are from different periods from 1939 till 1941. All from Juterbog, Germany. One of them is with German cross on the side, and other two feature letters. 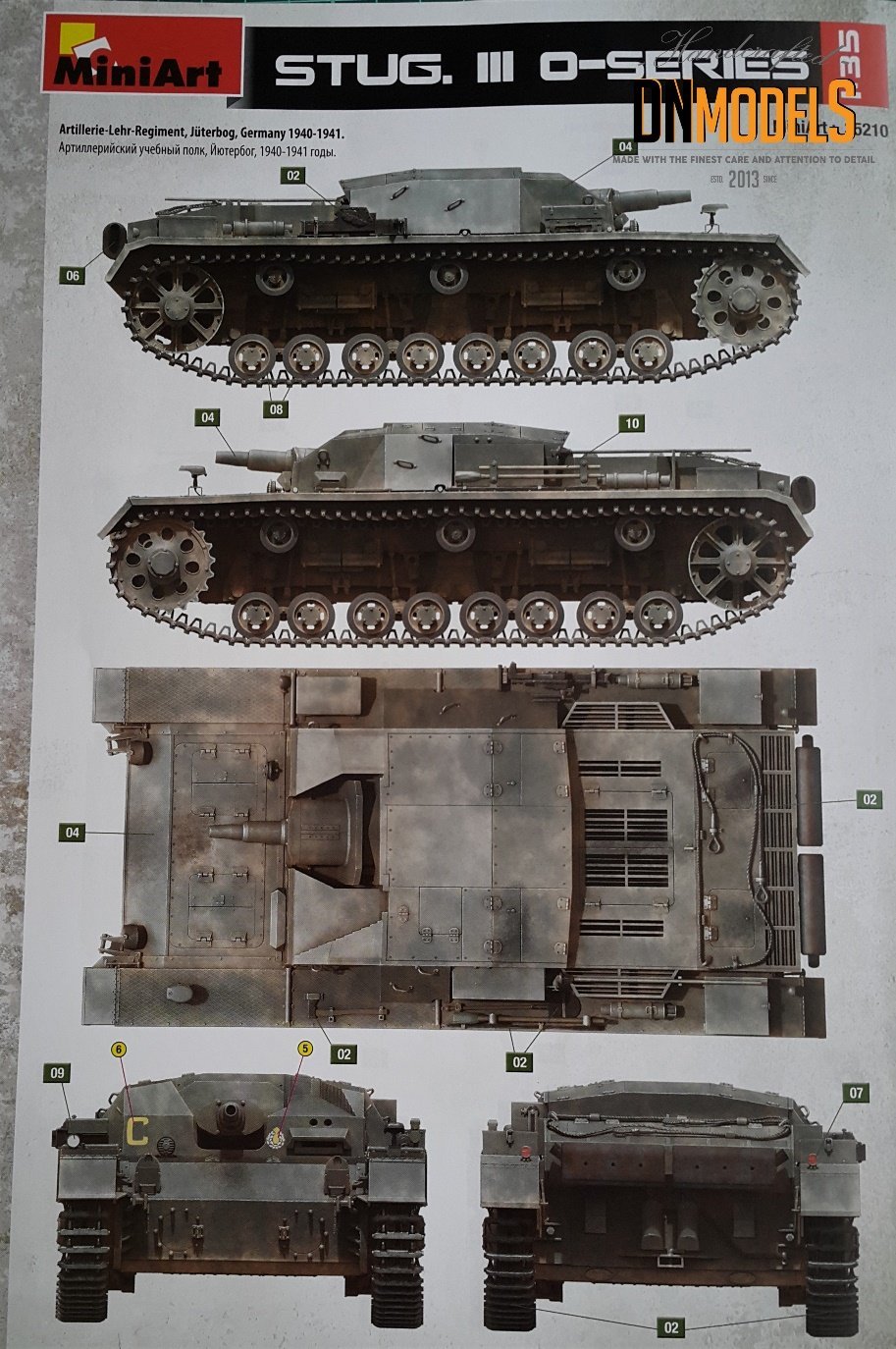 I don’t want to put too much attention here, because single-tone camouflages are not about the markings, but about the way they can be weathered. That goes in 100% with this vehicle, especially with those dark colors which allow for serious modulation and weathering techniques.

In my opinion, the cross will be sufficient and the rest will be painting techniques. 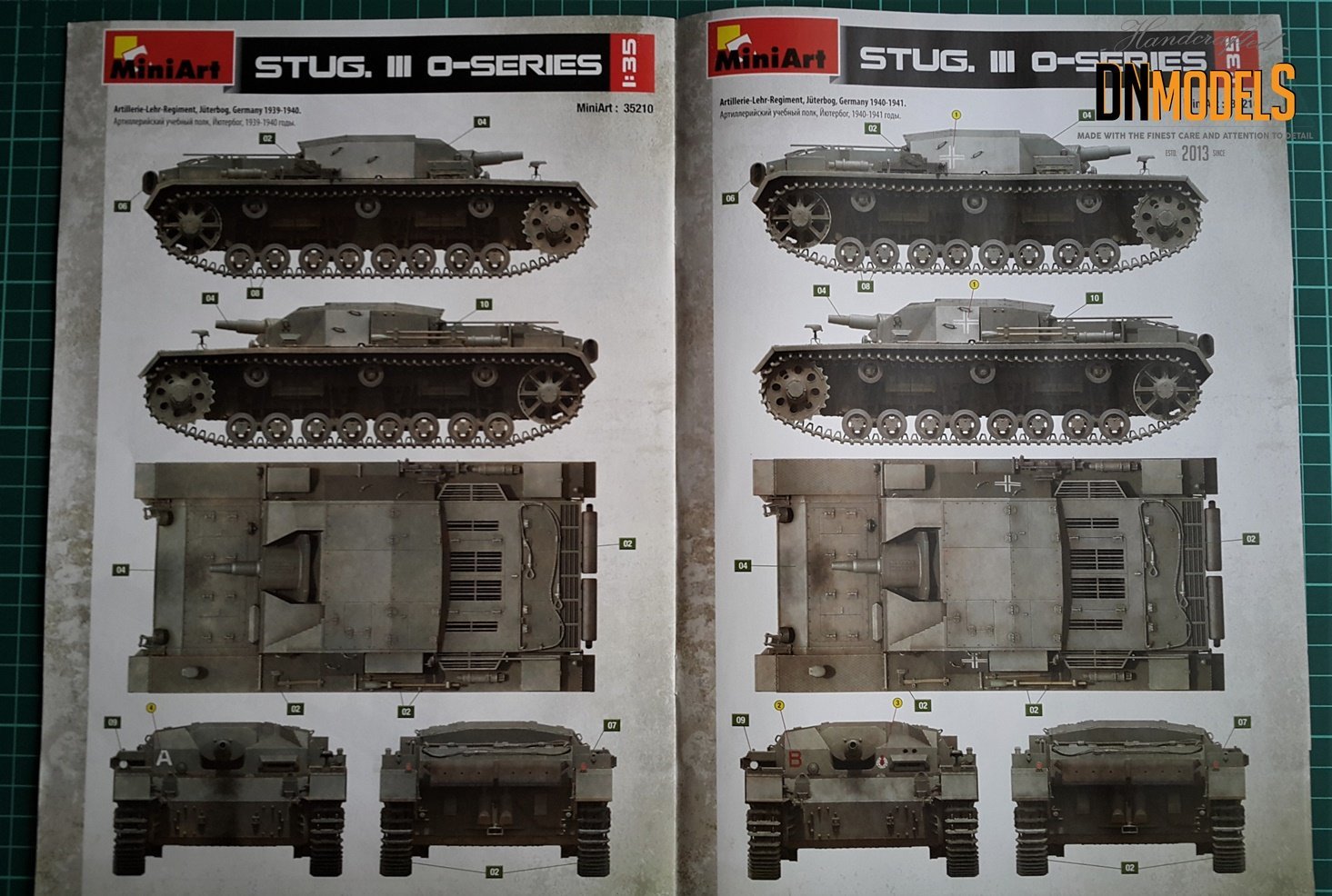 This kits is accurate, according to various sources and StuG experts. It is also challenging and not suitable for beginners, which makes it even more attractive. The fact that the hull is divided into separate parts changes a lot, especially when comparing that to Tamiya or DML. The level of detailing is superb as with almost every MiniArt kit and the set by itself is absolutely self-sufficient.

The elimination of the need of any aftermarket is vital here, which added to the price makes this StuG III irresistible offer. MiniArt continue to surprise with gorgeous kits that are below the medium prices on the market and in the same time above the average quality.

This StuG III is hopefully a start of a new line of StuGs which, if released by MiniArt will mark a whole new era in StuG modeling. MiniArt’s approach towards suspension, interior and photo-etch quality is one of a kind and if they release the later version of the StuG it is certain that they will eliminate all competition on that particular scene.