Tamiya is pushing itself back to the market, slowly but steadily. After their wonderful line of 32nd scale aircraft, 48th scale new tooling Tomcat and new tooling Sherman Easy Eight, they did a slight turn and made an M40 howitzer. It is 155mm howitzer, based on the Sherman tank, and the tooling is new, based on their Easy 8 new tooling from 2016. The E8 kit is superb with the only let down of tracks being vinyl. Tamiya released a vehicle based on the same chassis, using their already wonderful base, to provide with another kit, used mainly in different era – Korean War.

Being experienced in building their Shermans, from M51 to Easy Eight, I must say that there is no flaws with those kits. So, there is nothing to wonder, when people are expecting the M40 to be flawless as well. As mentioned above, the vinyl tracks might be a problem for some, but the quality of Tamiya’s kit proven, that there are no big issues with those.

The great news here are that Tamiya is already releasing an upgrade set. The basic kit – #35351 – features photo-etch set. Although small, Tamiya M40 is in the high-end line already. In order to elevate it even more, Tamiya went further, giving us a Gun barrel set. 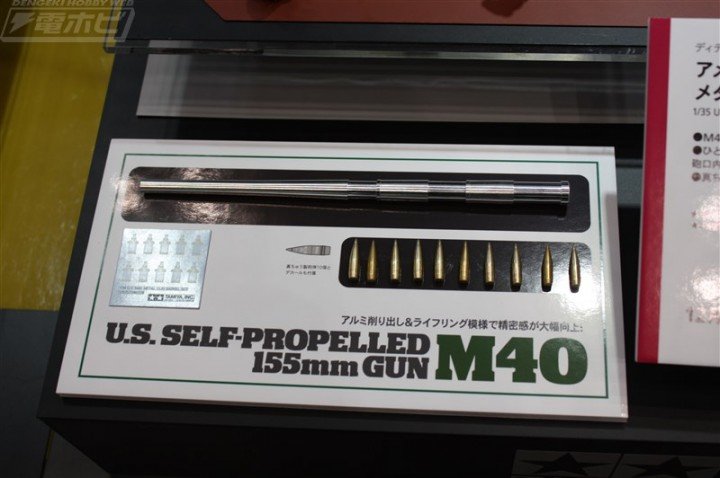 picture is taken from Scalemates.com

The gun barrel set features a wonderful gun barrel and shells. The barrel looks heavy, and it will be eventually tricky to install it and keep the balance of the kit itself. However, Tamiya are made in Japan and I doubt that the Japanese haven’t think of a solution to that. Actually, they promised two different set – 12671 and 12671. I cannot tell what is the difference yet, but probably one will be more completed than the other or there will be oriented towards the Japanese and the International markets.

The decals that Tamiya uses are kinda thick and we are all aware of it. So DN Models comes to the rescue here. In the shop – www.dnmodels.com – you can find allied stencils, which are pretty much the same as the markings used in Korea. You will find those usefull when it comes down to painting and weathering the vehicle. After all, it is a single-tone camouflage, and there are many tips and tricks to be used to make it shine, none of which are comparable with applying decals over it.

All in all – Tamiya suprises again! A straight out of the well-known-path vehicle, just like their Su-76M released this year. This Tamiya M40 a nice add-on to any collection. Especially for howitzer fans like myself, the SPG is great news!

Let’s see what the aftermarket manufacturers are about to offer us! It is only a matter of time. Few months probably!