The more one uses a specific tool, the more he or she is inclined to continue using it and avoid changes. One reason for that is the experience and the mastery that a person can achieve being comfortable around and with something. Another is that the habit of using something quite often becomes a second nature. That being said, there is no wonder why some of the most experienced modelers paint with old and rugged airbrushes, that are off the market and without support of any kind. However, they are sufficient for the job they are being used for, sometimes even exceeding the expectations of the spectators. 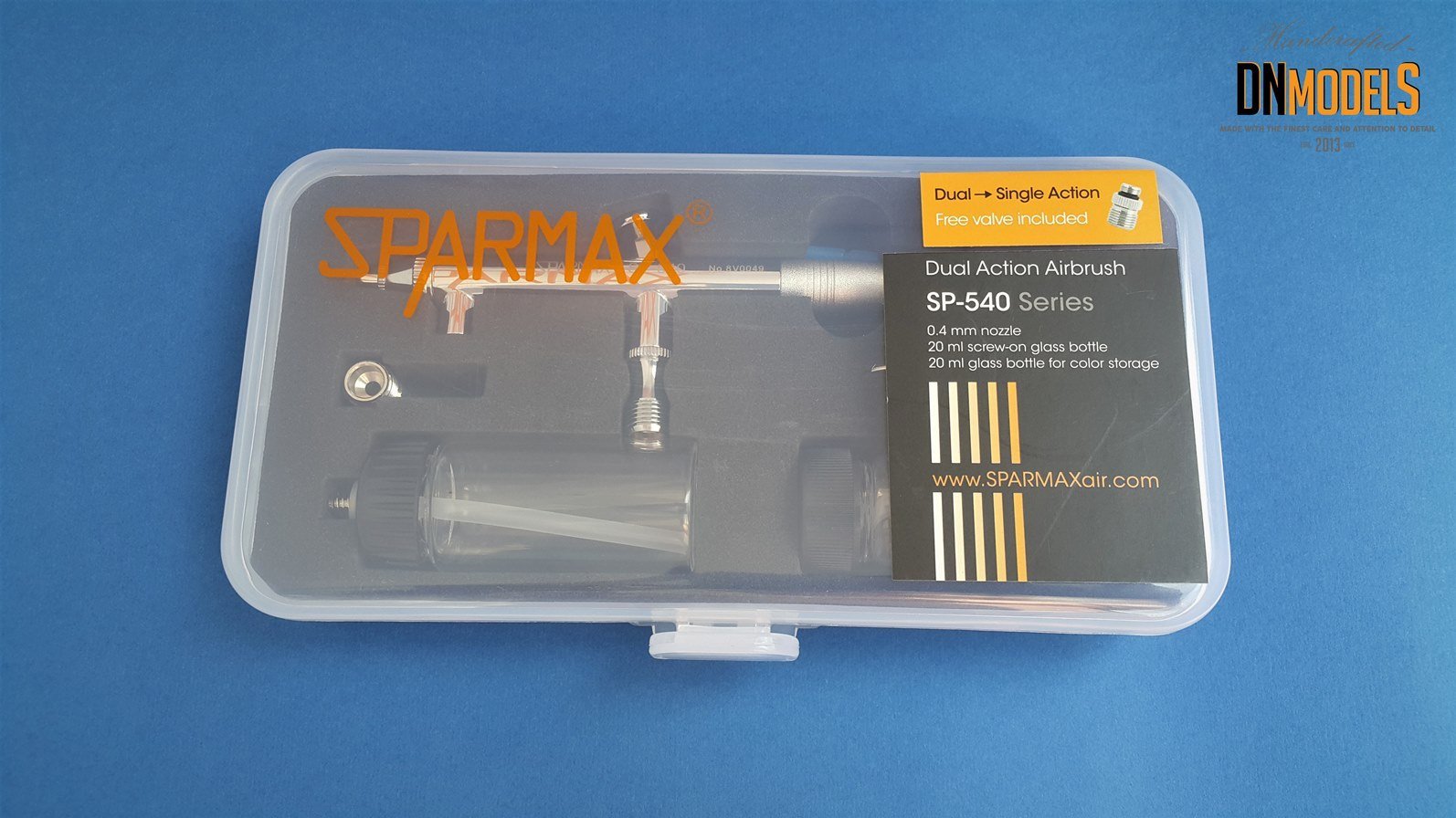 Based on the tech specs and the perception that the more tiny the nozzle is and the extras included are abundant, many people avoid buying simple, tough and proven airbrushes. However those airbrushes can do magical things and perform as well as the top tools on the market. That is for the half of the price, but with a little more practice and experience required. In other words, it is not guaranteed that if you buy the most expensive tool you will become master. But is guaranteed, that with a regular airbrush, you can become a pro, just based on knowledge and constant improvement and strong will.

One such airbrush is the SP-540. It is a Sparmax tool, which seems simple and rugged, but if you get to know it better, you will see that there is a lot more behind the looks and it well exceeds many expectations.

With 0.4mm nozzle, missing the tail-stopper and bottom feed from plastic bottles, Sparmax SP-540 looks far from exciting. For some it might look cheap and even worthless. What is expected from such airbrush is to perform good on general subjects. Like priming, clear coats and single tone applications. For some of the industries different from scale modeling, it is accepted that this tool can do general work, but nothing overly specific. All of that, based on the nozzle size, lack of fine pressure valve or tail stopper. Not much of a stud, if one might say. 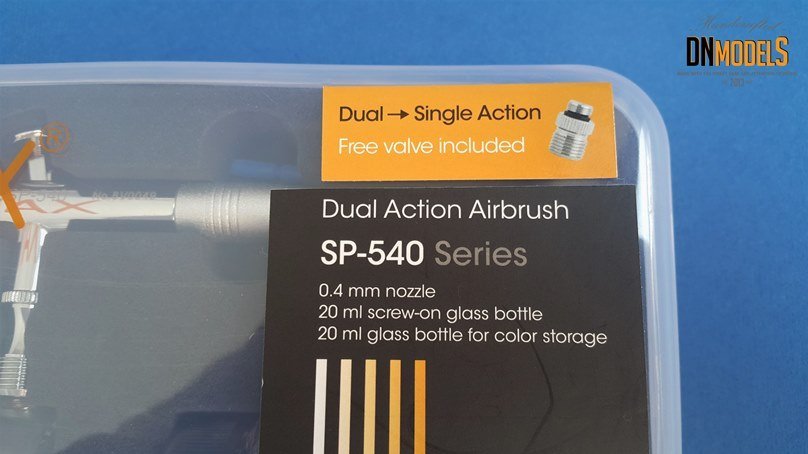 Actual performance of the SP-540 differs from the supposed one. And by far.

0.4mm nozzle is not such a sniper weapon as seen on the ones that we are used to recently – .2mm or .15mm – but is still very much within the limits of what is accepted as common. And that is .3mm or .35mm for most of the brands. When you come to think of it, that is not much.

Besides, the most important thing about an airbrush is its balance and the ergonomics, not the nozzle size. And Sparmax SP-540 is very balanced and fine tuned airbrush. It is dual action, bottom feed tool that makes it perfect starter. The bottle size and attachment guarantees that spills are almost impossible and the lack of tail stopper can help you focus on working your trigger, not just squeezing it, depending on the mechanics to stop it when needed.

That last one is actually really important, since paint build up can really mess things up if you are too dependent on the stopper. 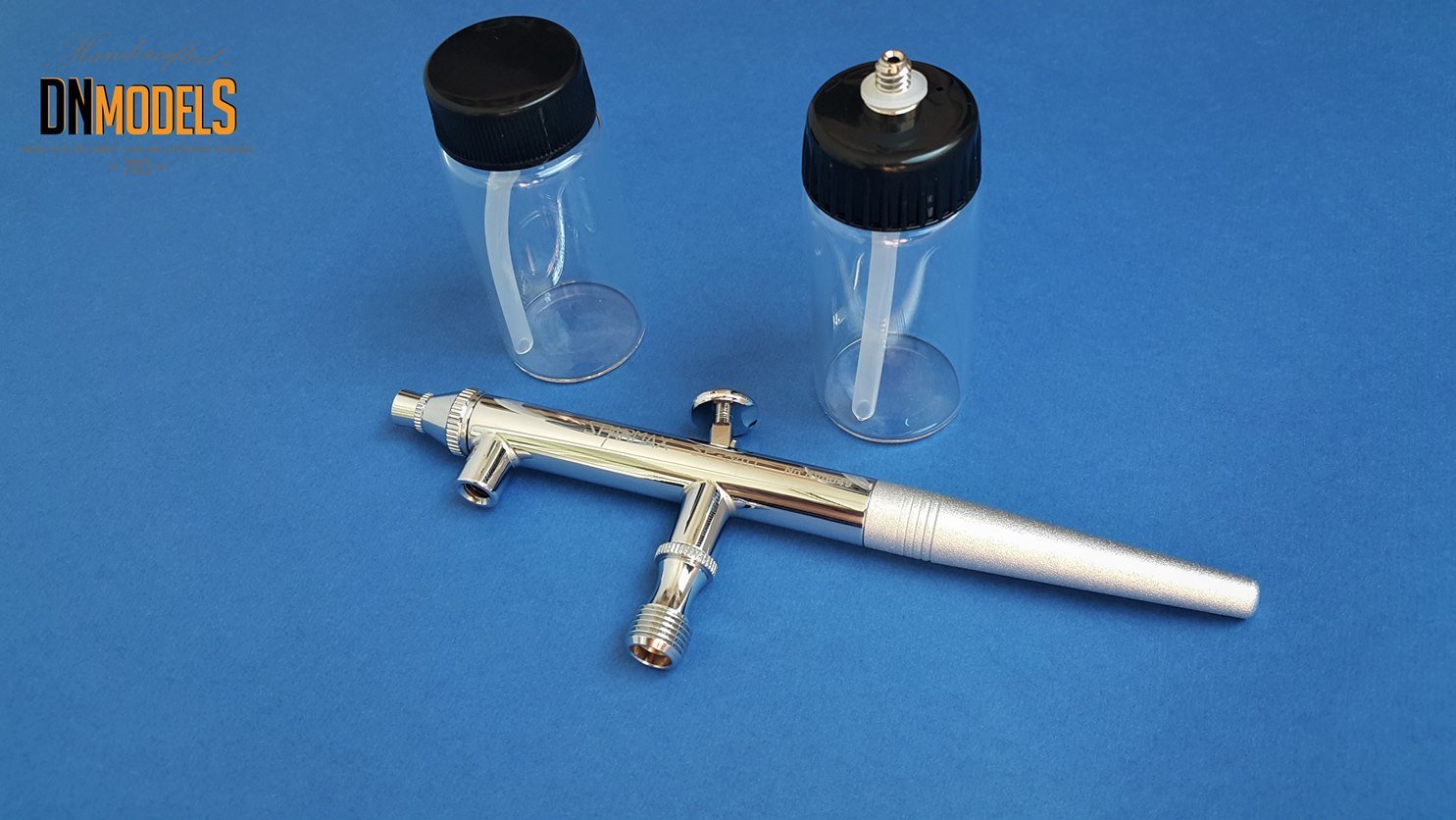 The overall simplicity of the tools helps for the maintenance and spare you the hassle for unwanted damages of the fine parts. The business end of the SP-540 for example, even though looks bigger than what we are used to, is working just fine. Easy to clean, low risk of damage, far from delicate. In the positive way of course.

The airbrush can do a lot more than it is expected from. It can draw fine lines /especially with the needle cap off/ and in the same time can cover evenly, while working with envious consistence, compared with the rest airbrushes in that same class. No wonder, since Sparmax are making airbrushes for 4 decades already.

SP-540 can be easily used as a primer-only tool, or a starter airbrush, but it can stick with you for a long long time too, even as a main gun. That is only if you can develop the feel for it, which is strongly individual. Based on my personal experience, if you start with it, you will most likely stick to it and for a while. 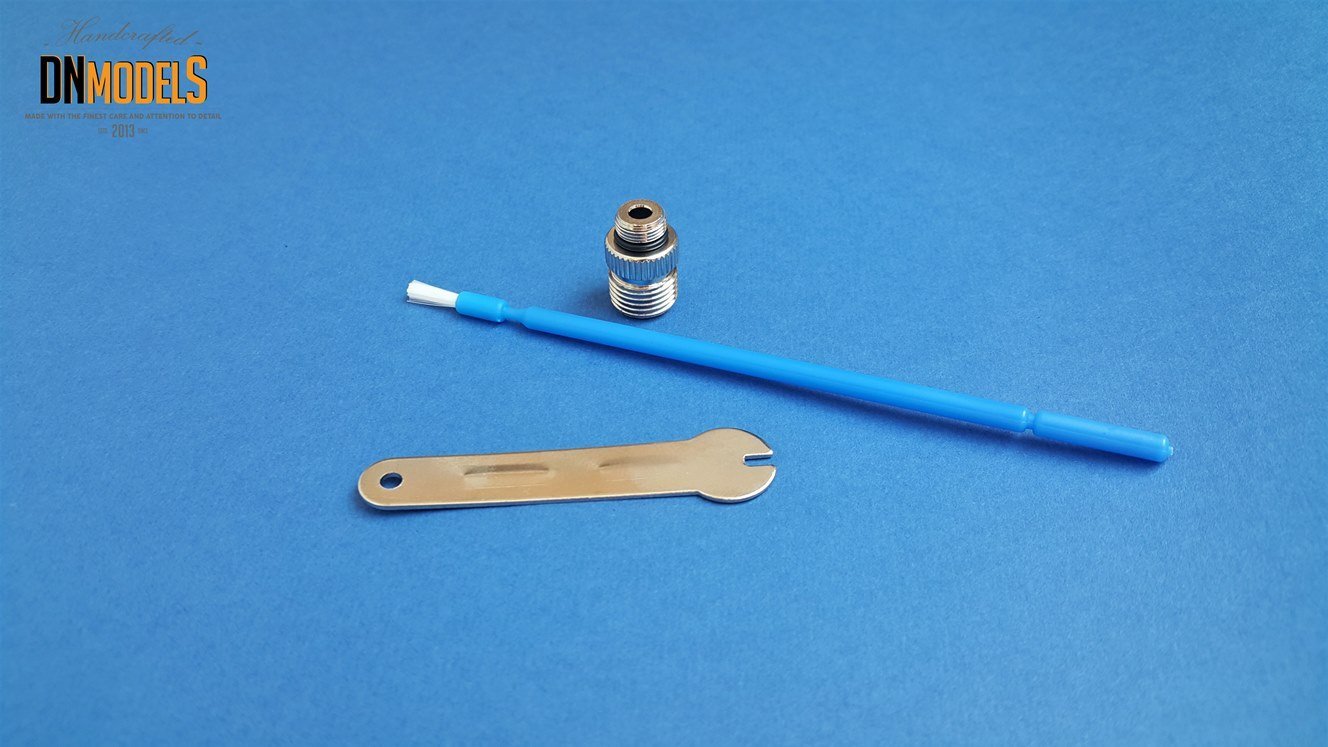 The cheapest airbrushes that come from China perform exactly how they are valued. They are inconsistent, defective and can let you down in the worst moment. The next level is basic tool airbrushes, such as SP-540, usually bottom feed too. However, this isn’t one level above the Chinese cheapos, but at least 4 or 5. The value of the airbrush is very good. Actually, you pay a little above the Cheapo airbrush, but you pay 2 or 3 times less than the next level tool, while you are getting a quality closer to the higher category.

So when you come to think of it, this is the best value for the money that you can get from airbrushing. Especially if you are in the first years of your airbrushing career.

It is unreasonable to start with an airbrush that costs $150-200, because you will damage it at some point. Accidents happen. Especially to the newcomers. On the other hand it is unreasonable to get a tool that can easily push you away from airbrushing, based on ill practice and inconsistent results.

What that leaves you with, is pretty much only one simple and reasonable choice. Even though that choice can be widen within the brands. 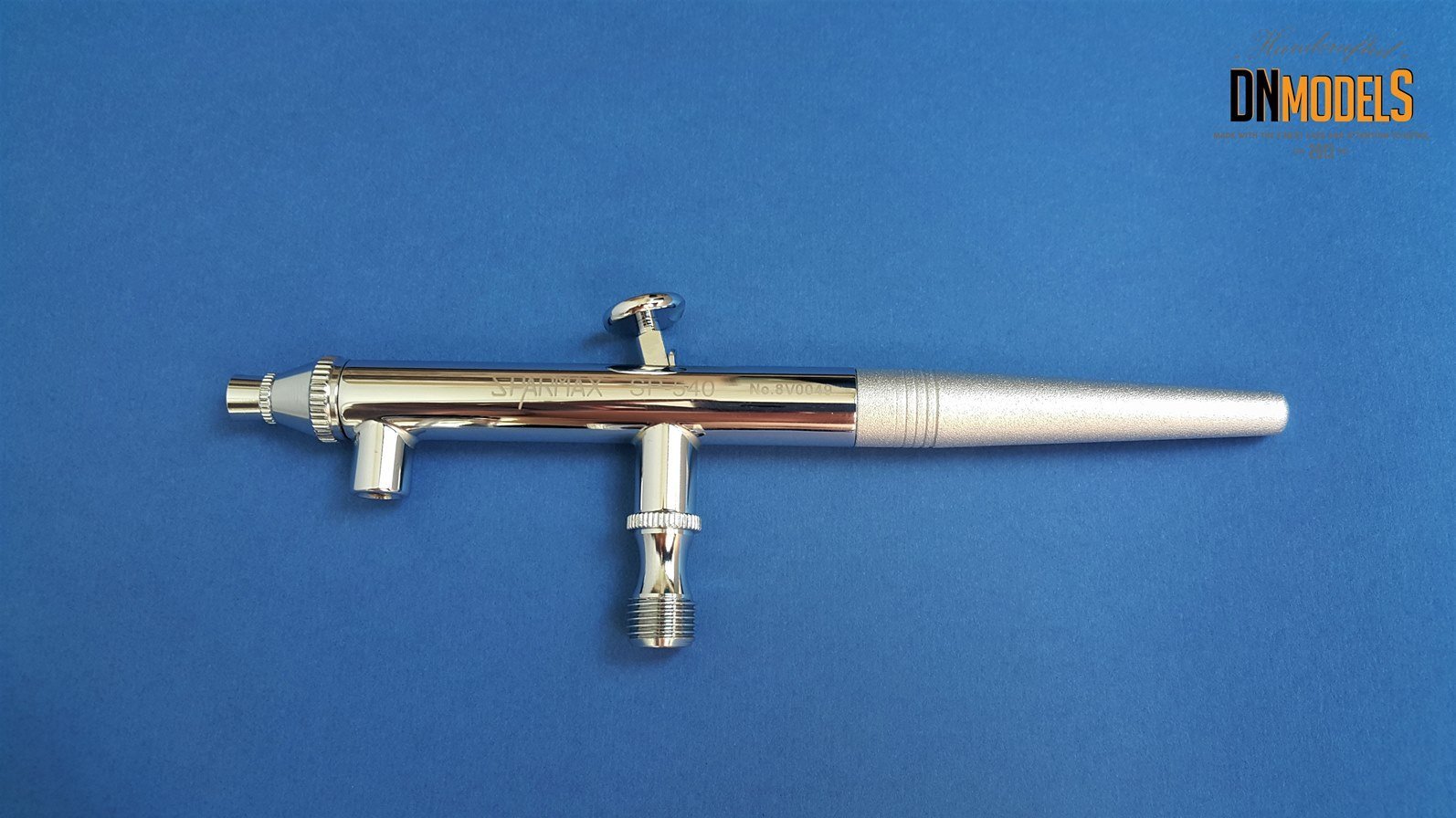 As mentioned above, 40 years of experience for Sparmax can help you with that choice. To be that long in the game, you gotta know how to play it. SP-540 is a very good option and the quality is not neglected in any way.

The airbrush only looks rugged. It is very nice and balanced tool actually. It is not heavy, nor the trigger is flimsy. The only thing that might fool you is the look of the tail, which is not made by polished metal. However the rest is just where it should be: the quality of the box, the contents, the little goodies included. Like the hanger of the plastic clamshell for example. The small things that make a big difference combined altogether.

I cannot lie and I must say that I am Sparmax fan. I own several of their airbrushes and in my honesty, I never met anyone who does not appreciate Sparmax as a brand. SP-540 is not surprisingly one very satisfactory tool. Especially when you come to think of it as an investment.

The price is right, the quality is more than decent. On the other hand the lack of bells and whistles might not tempt you at first, but simple things usually work with less effort and fewer troubles. That does not mean that you should consider it as an all-in-one tool. But a tool that can easily complete most of the tasks and will serve most of the modelers out there fulfilling their needs in airbrushing.

My personal opinion is that this is another hit from Sparmax, targeted towards a wider audience. Probably the larger part of the users out there. And with that quality, I think this is an all-around winner!