The first time I saw the the Flyer from Sparmax I was beyond surprised. I have couple of their products on my bench that I use on regular basis. The newest item that I got was quite different. And by that I mean not bad or good, but approached with different perspective from the manufacturer. It turned out to be a pleasant surprise, but let me fill you in how I got to that point.

The Flyer, as this airbrush is called, appeared different and was made from plastic, but not only that. It grip resembles some pistol grip airbrushes, but it is limited to its vertical structure, missing the metal pieces which are standard for an airbrush. By that I mean the “gun point” that you use to aim and shoot. 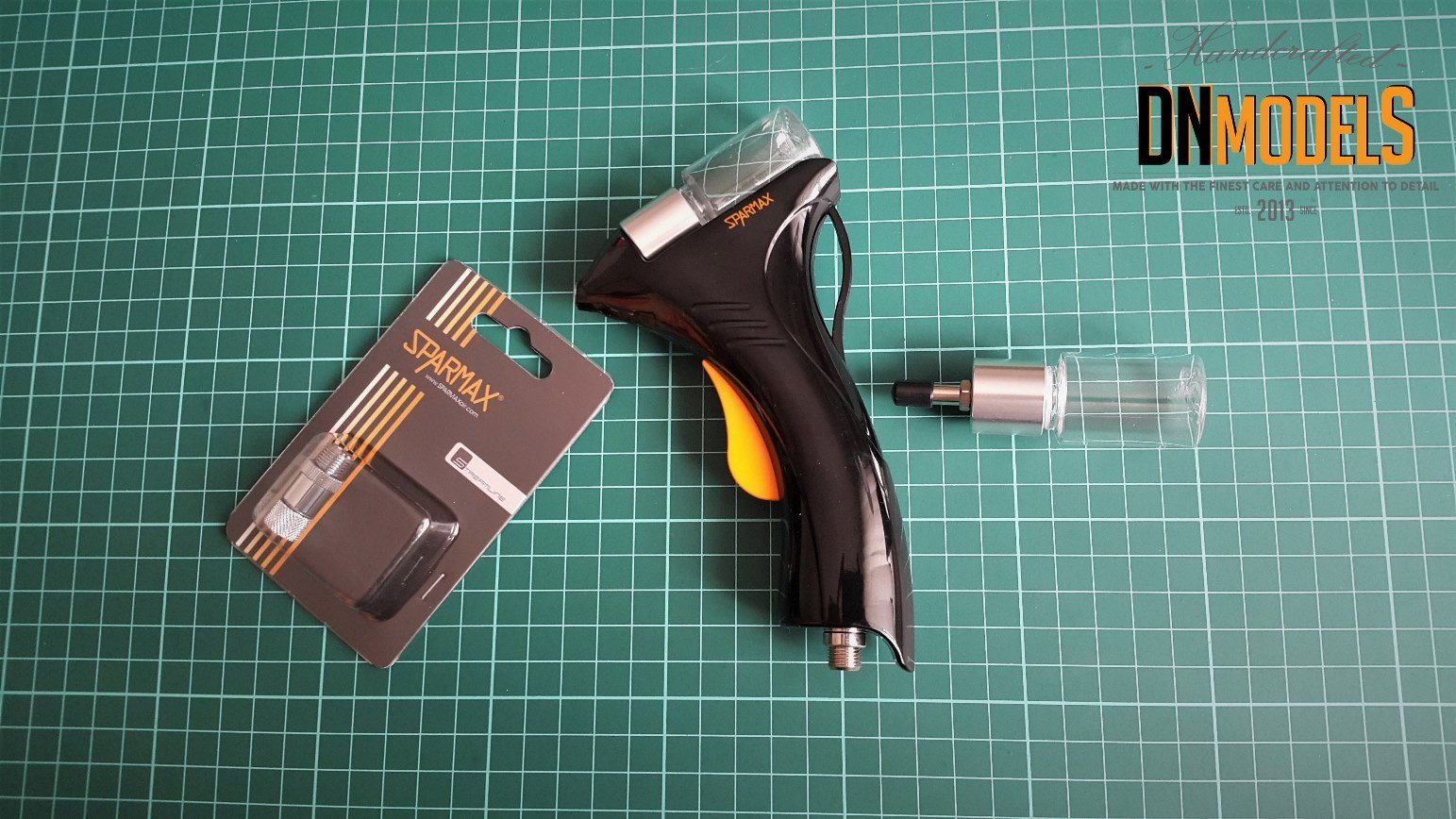 On top of it the jar /or maybe I should call it a cartridge/ of paint is placed, and the whole thing when prepped for work resembles the tranquilizer guns seen in some sci-fi movies. Sparmax Flyer is made of plastic – predominantly – and it has black body with orange trigger and transparent top where you can see the color and quantity of paint.

To be frank, the start was rather disappointing. But you should never judge things from the first glimpse.

Time for the first kiss. I gotta admit, the grip is very nice and the airbrush fits in your palm, allowing firm grip and easy trigger control. It is not heavy, probably due to plastics which is being made from and especially when the paint comes to its last drops in the jar. But even full, the 15 ml fluid bottle is not much of a weight changer.

If you haven’t used pistol grip airbrush, getting used to the Flyer will present some time-challenge. I have been into pistol-grip airbrushes for more than 8 years already and the transfer was an easy one. The lack of an extension of the business end of the Flyer is somewhat odd though. 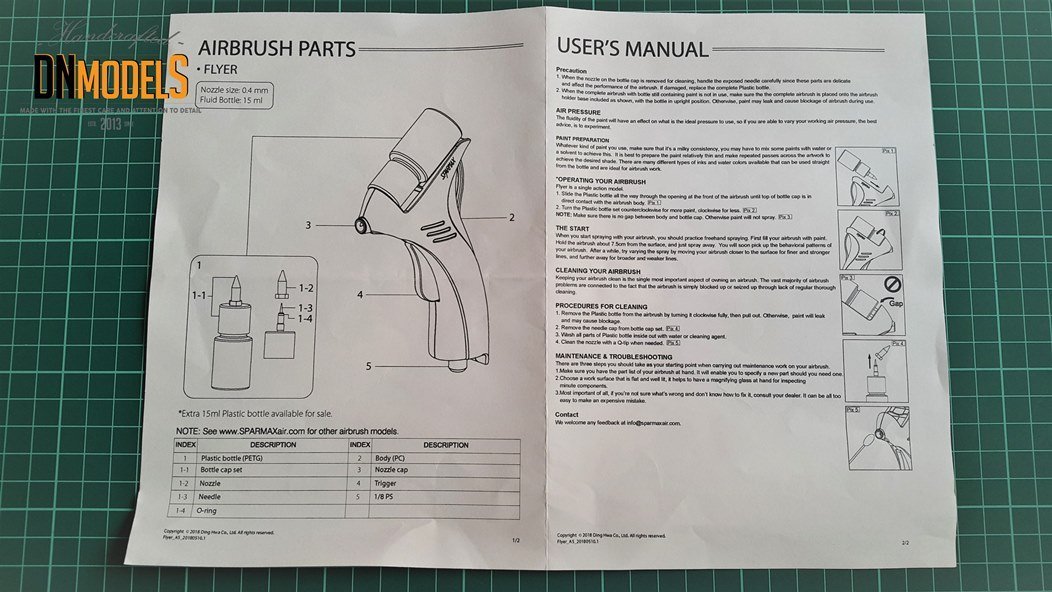 With that said, I have to add, that this isn’t a precise airbrush. This is far from the snipers which are with .15 or .2mm needle/nozzle combos. The nozzle here is .4mm but for more than one reasons, the control is very limited. In general, this is an airbrush which is contemplated to be used for general airbrushing over large areas.

That take us to this very next step. How does it work? For the rugged looks that it has, it gives stellar performance actually. How did Sparmax made the magic? I have no idea. The results are even coats, great atomization, unified and smooth surface results and trouble-less performance.

From the very first session, the airbrush completed the tasks that I had in my mind. Which was spraying over a flat surface and with single layer. What I tried was primer and paint, intentionally missing the clear coats. From my experience, if you can do primer and paint, clears are a breeze. 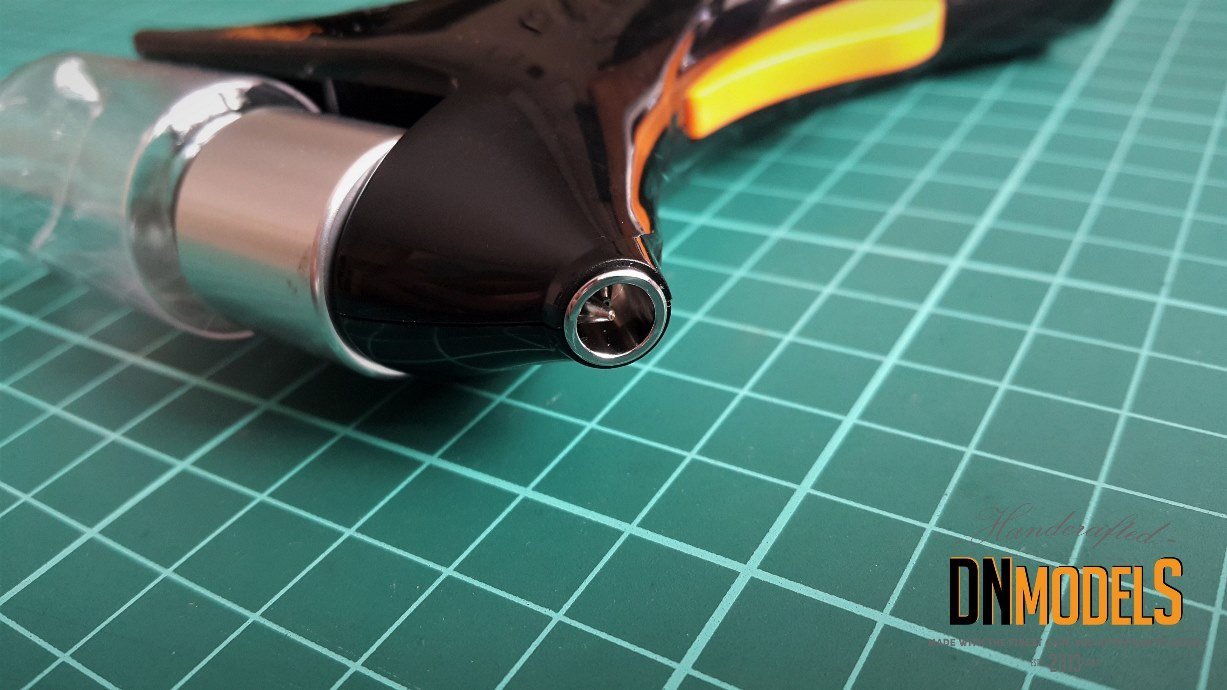 There were no hick-ups, no un-even areas nor any other troubles or mishaps. Some of these you can easily get with Chinese cheapos, especially single-action ones. For my surprise this toy-ish looking chunk of plastic did the job better than those and with finesse. 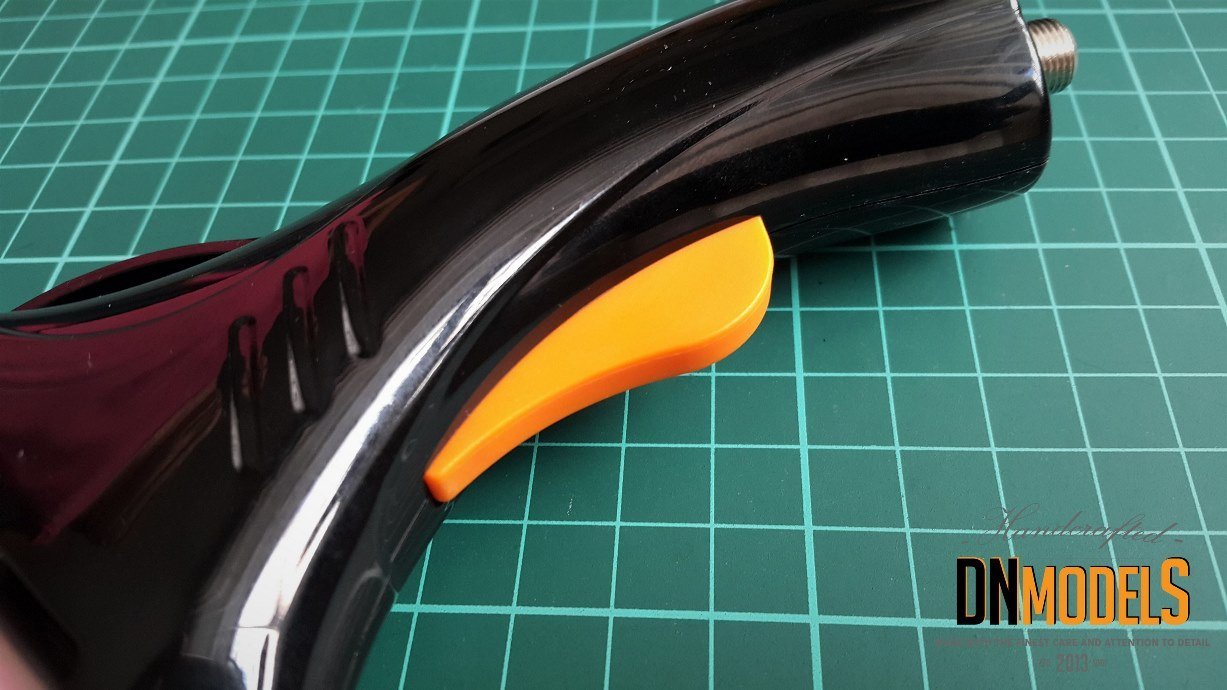 It is difficult to get used to the distance from which you should apply the material. Again, lack of extension of the business end justifies that /my point from the beginning – the missing “gun point” that you use to aim and shoot/. But in few minutes everything comes into place and comfort kicks in. 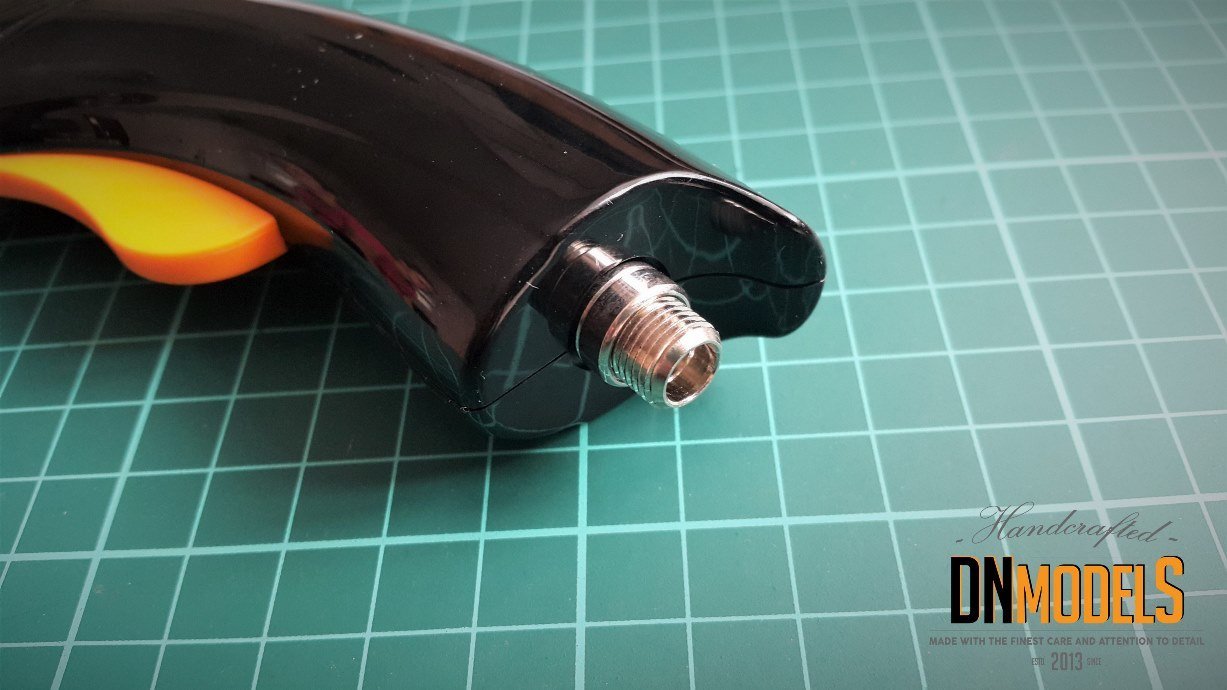 Air pressure regulator that I have from Sparmax did great deal of work with my initial trials. I consider this /or such/ add-on a must if you plan to use Sparmax Flyer. The standard 1/8” hose fitting allows for easy attachment of such, as well as an moisture trap along the line. The latter one is very adequate add-on too, since this airbrush is air-grizzler and with air often comes the water. 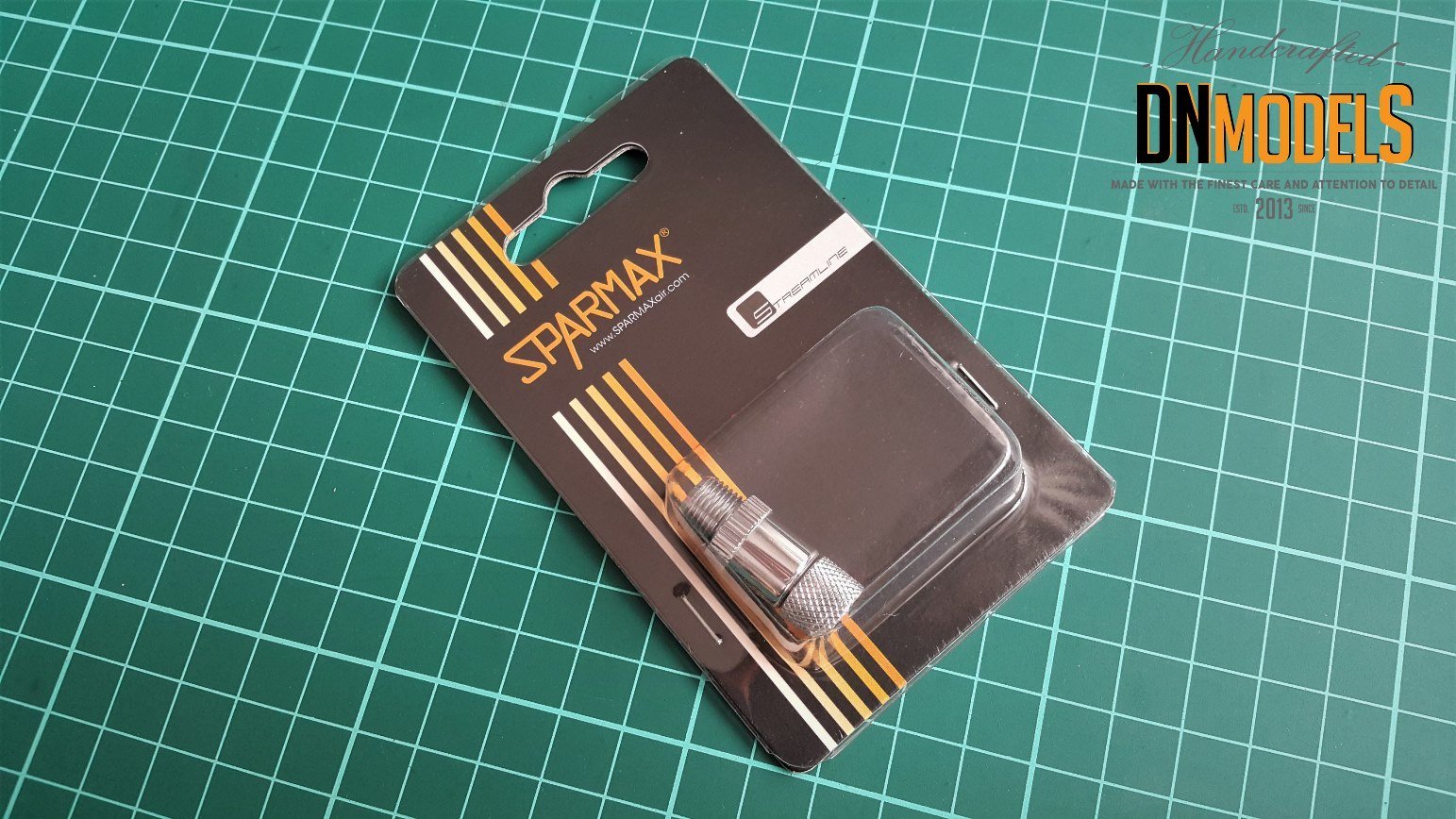 However, the add-on that I enjoyed the most and will use every time with the Flyer is the air pressure regulator or Air Control Valve as Sparmax call it.

The Fluid bottle of the Sparmax Flyer is more than just a bottle. The nozzle of the airbrush is embedded in it. I got lucky, because I got two separate bottle from the get go. Thus two nozzles. No cleaning needed, at least not so often. However, in my case the second fluid bottle was a bonus. Originally, the airbrush comes with only one. 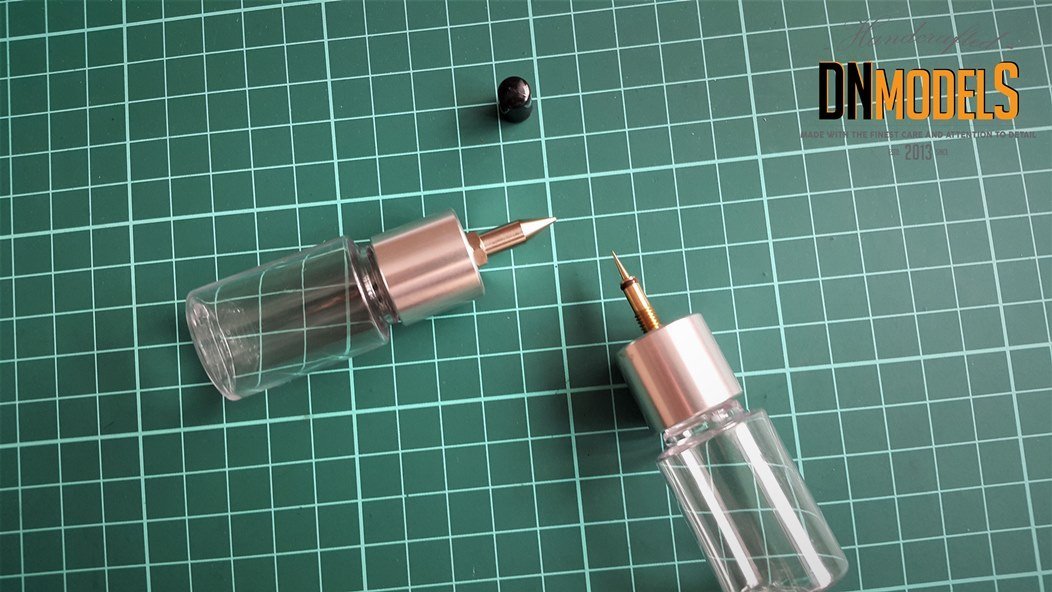 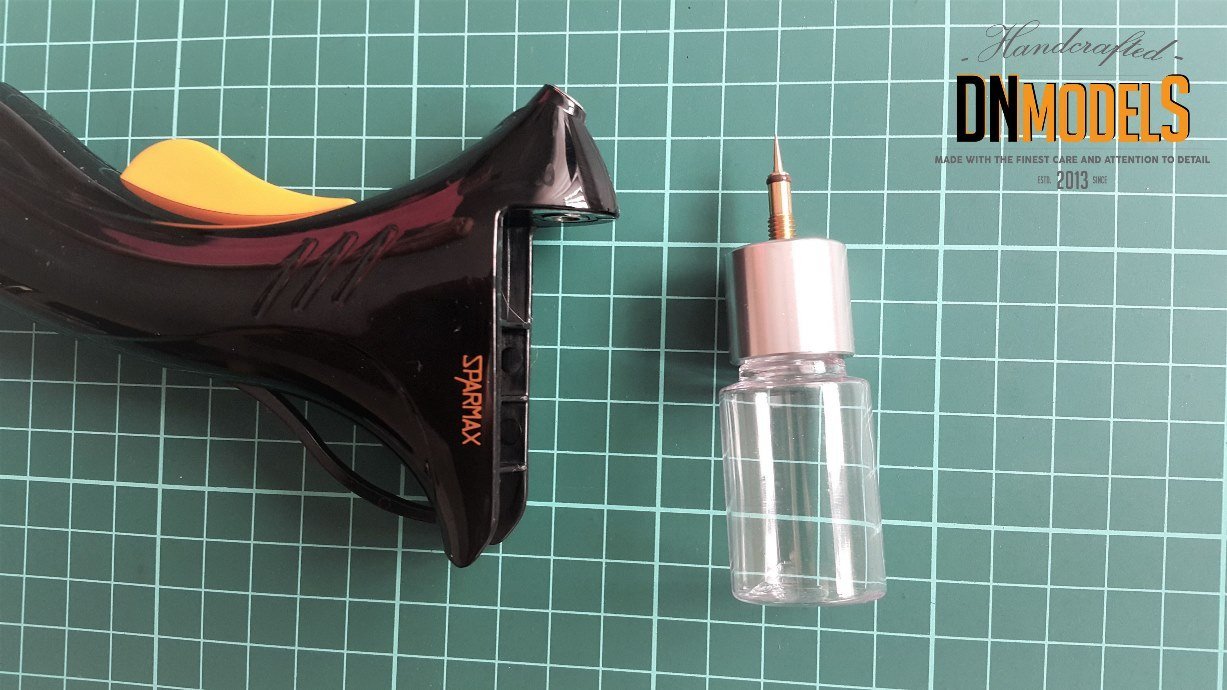 The fact that the nozzle is included though, makes me think that there is no way to get one too many of these. Each paint in separate jar, with its own nozzle, well, it doesn’t get any better than that. Or does it? Yeah, maybe when self-cleaning airbrushes appear on the market. But I doubt it, since I remember the self-cleaning VHS tape recorders. Do you?

Sparmax Flyer is one odd bird. It has primitive appearance, but it works perfectly fine. Besides, it is very fancy for non-professional airbrush users. It resembles that tranquilizer gun from Total Recall –Schwarzenegger classic – where they injected his neck with a sedative from something that I think was the Flyer prototype. I am joking of course. 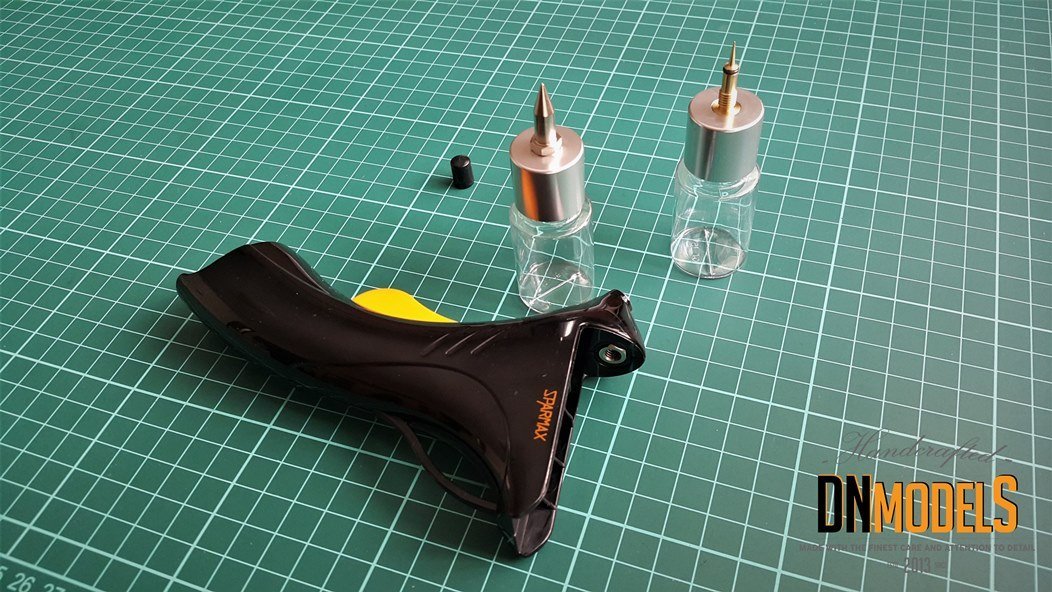 The airbrush is very good entry level tool and even for advanced users, it will do most of the general work, especially if you work on large areas. Control-wise is limited. Sometimes that can be annoying. But if you are entering the airbrush realm with it, you won’t notice that. Even if you do, you wouldn’t mind, trust me. It saves a lot of trouble being what it is.

I have to admit, at first glance, I underestimated it. And I was wrong. It is pretty neat airbrush. The looks can be deceiving…